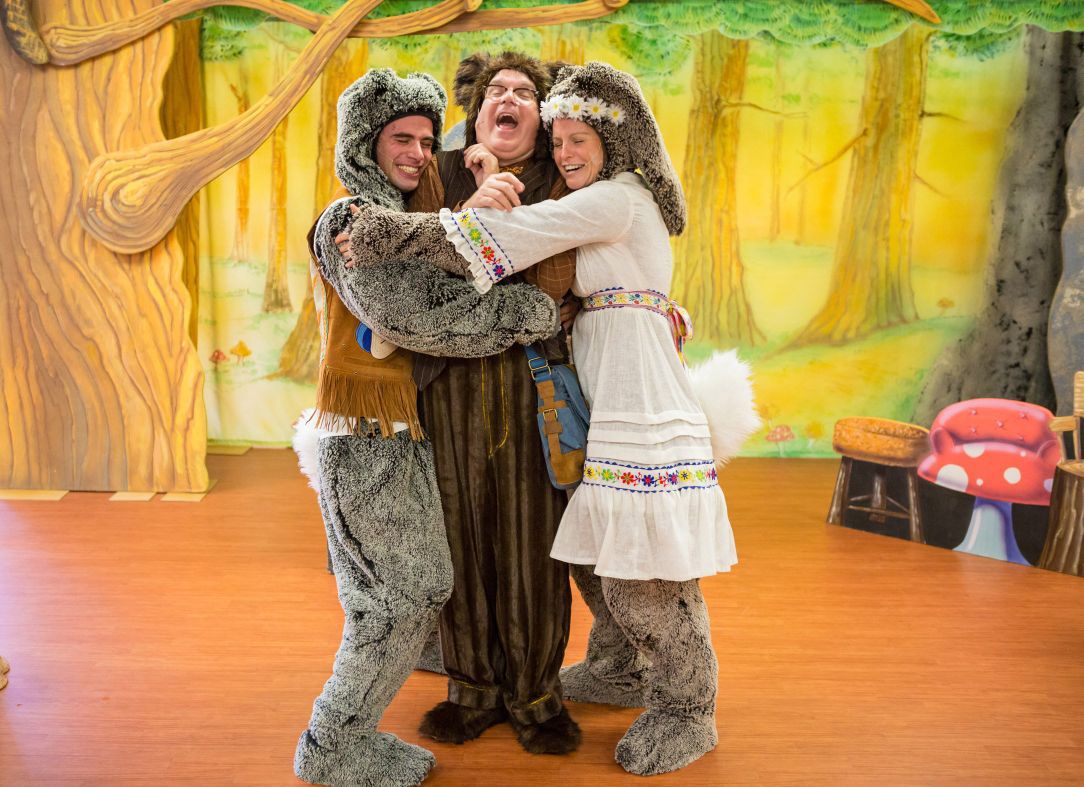 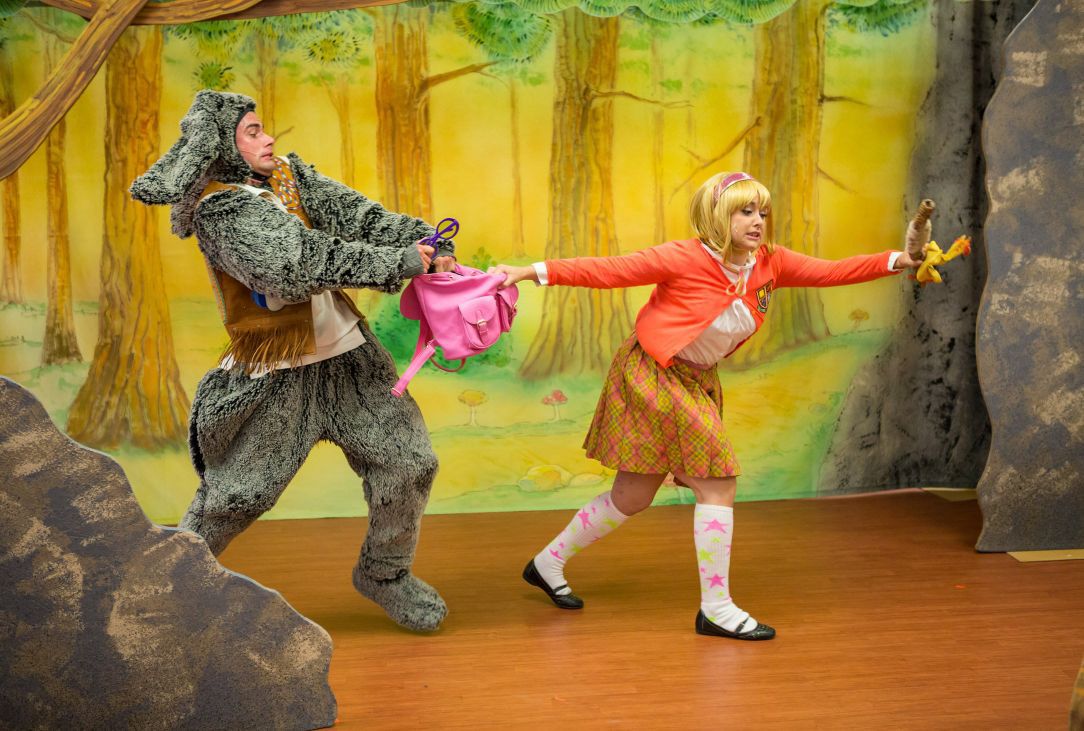 Live theater, by its nature, is a little unpredictable.

Children on the autism spectrum, by their nature, thrive on predictability.

That’s why Marsha Coplon, the director of education at the Repertory Theatre of St. Louis, took to the stage before a recent performance of “Goldilocks” to explain what would happen during the show.

“This is the actors’ space,” Coplon says, gesturing to a forest of plywood trees and bright green bushes festooned with flowers.

“This is our space.” She extends her arms toward the audience of about three dozen spread out among 80 velvety maroon chairs.

It is a special “sensory-friendly” performance of the Imaginary Theatre Company’s environmentally conscious take on the classic girl-meets-bears fairy tale.

Many, but not all, people with autism have sensitivity to bright lights, loud noises or jarring movements. Other people may have sensory-processing problems but do not have autism.

So, for this performance, the lights inside Emerson Studio Theatre at the Rep have been softened by blue gel coverings. The actors won’t be miked or spotlighted.

On this Saturday afternoon, Coplon tells the audience how long the show will be and what will happen when it is over.

These details are also outlined in a “social story,” a narrative that parents can download before the performance. It gives step-by-step specifics — and pictures — of what to expect when seeing a play: buying a ticket at the box office, entering the theater, finding a seat with the help of an usher, or “buddy,” as the narrative calls them.

It also includes contingencies, which Coplon mentions in her welcome. Space behind the last row of seats is for children who might need to walk or pace but still want to be able to see and hear the show. A “fidget room” in the back provides a secluded spot for a lengthier break.

The hubbub before this performance, the second of the day, suggests the extra space could be in high demand.

Four-year-old Jayden Watts is vigorously dancing at the edge of the stage. Her pink sparkly sneakers light up each time she kicks her feet, which are in continuous motion.

Jayden, who has autism, has never been to a movie or a concert or a play. “We never had an opportunity where it was accepted,” says her mom, Erica Watts, of Jefferson County. “We wonder, will she be able to sit that long? Will it be too much? Not enough?

“But we’re not doing Jayden any favors by not getting her out into the world.”

Jayden’s twin sister, Mia, is also excited about the show and seeing her favorite character, “Goldy.” Mia, who does not have autism, checks out the stage and then takes a seat in front of her mother while Jayden spins and swirls.

When Coplon starts talking, Brian Watts pulls Jayden into his lap and nestles his daughter into a kind of pretzel fold of arms and legs.

The play begins with minimal fanfare but a fairly lengthy back story.

It’s an impulse that has been felt by other organizations, here and across the country. The Theatre Development Fund in New York helped pioneer the movement toward inclusive programming by launching the Autism Theatre Initiative in 2011. The initiative presents autism-friendly shows on Broadway and advises performance groups across the country.

Last June, Andrew Kuhlman of Stages St. Louis tapped into the initiative’s expertise and that of VSA Missouri, a nonprofit devoted to all-inclusive access to the arts, to produce Stages’ first sensory-friendly show, a performance of “The Aristocats.”

“The No. 1 thing we learned is it is our job to set expectations and keep as close as possible to those expectations,” says Kuhlman. On tap for this summer is “Alice in Wonderland.”

Circus Flora has performed a sensory-friendly version of its one-ring antics for the past two years with the guidance of Easter Seals Midwest. This year’s show, “Pastime,” will be June 23.

In the fall, Opera Theatre of St. Louis is planning a production of its “Opera on the Go” series exclusively for children on the autism spectrum and their families. And certain AMC Theatre locations regularly have sensory-friendly movie screenings with lights turned slightly up, sound turned slightly down and silence not required.

“Places are starting to realize there’s a need,” says Melanie Mills of Easter Seals Midwest. One in 68 U.S. children has an autism-spectrum disorder. “It’s not only beneficial for the public, but it’s beneficial for those venues.”

At the Rep, Coplon settled on “Goldilocks” because, with only four characters and few startling sounds or actions, the content didn’t need to be changed. The actors had been performing the show at area schools since October. Coplon, who has a background in special education, prepared them on what to expect.

“We were told to kind of relax and not worry if kids come on stage or interject vocally,” says Alan Knoll, who plays Fred the bear. “The main job that we have at Imaginary Theatre Company is to teach kids how to be an audience, and hopefully it will be a habit they get into.”

Coplon describes the show as “theater with no consequences.” No one will stare or judge if a child calls out, can’t sit still or needs to leave. “It’s a family show that a family can experience together,” she says.

On stage, a brown bear in furry overalls moseys through the trees with his two rabbit friends. They discover the remnants of a careless litterbug and launch into a snappy tune, “There’s a human in the forest.”

The preshow buzz that had been humming through the audience has quieted. One young man occasionally rocks back and forth in his chair. Someone’s foot is tap-tap-tapping.

No one seems to notice. A boy with Down syndrome sits transfixed on his mother’s lap, his gaze never leaving the characters.

Will Stadter, 12, had been agitated waiting for the show to begin, bothered by children who were examining the props instead of taking their seats.

The seventh-grader with autism is a theater veteran. He and his mother, Mary Stadter of Crestwood, go to the Muny each summer and saw “Aladdin” on Broadway in New York.

“He is sometimes sensitive to sound,” his mother says. “He gets overwhelmed by too much sound; he’ll put his hands over his ears.”

But today Will is engrossed in the show. He looks at his mom and flashes a toothy grin.

The animals and Goldilocks are involved in a series of challenges to see if Goldilocks can stay in the forest. The conflict is resolved with a decision to be friends, learn from one another and appreciate their differences.

As the bear, rabbits and flaxen-haired girl take a bow, the audience claps enthusiastically.

On the way to the stairs, Will catches a glimpse of Goldilocks in her orange cardigan and plaid skirt. He waves. She comes over, asks if he liked the show and offers him a hug.

Will beams. “I love musicals,” he says.