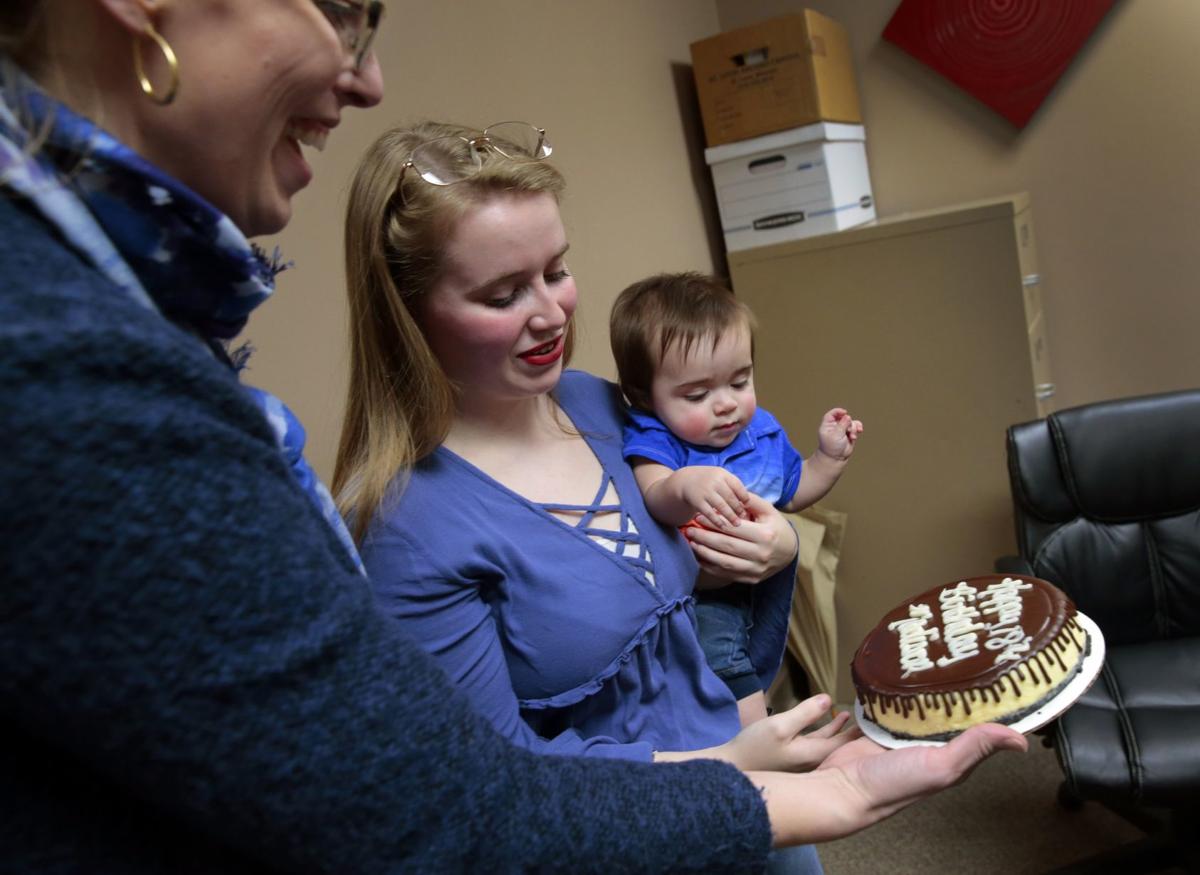 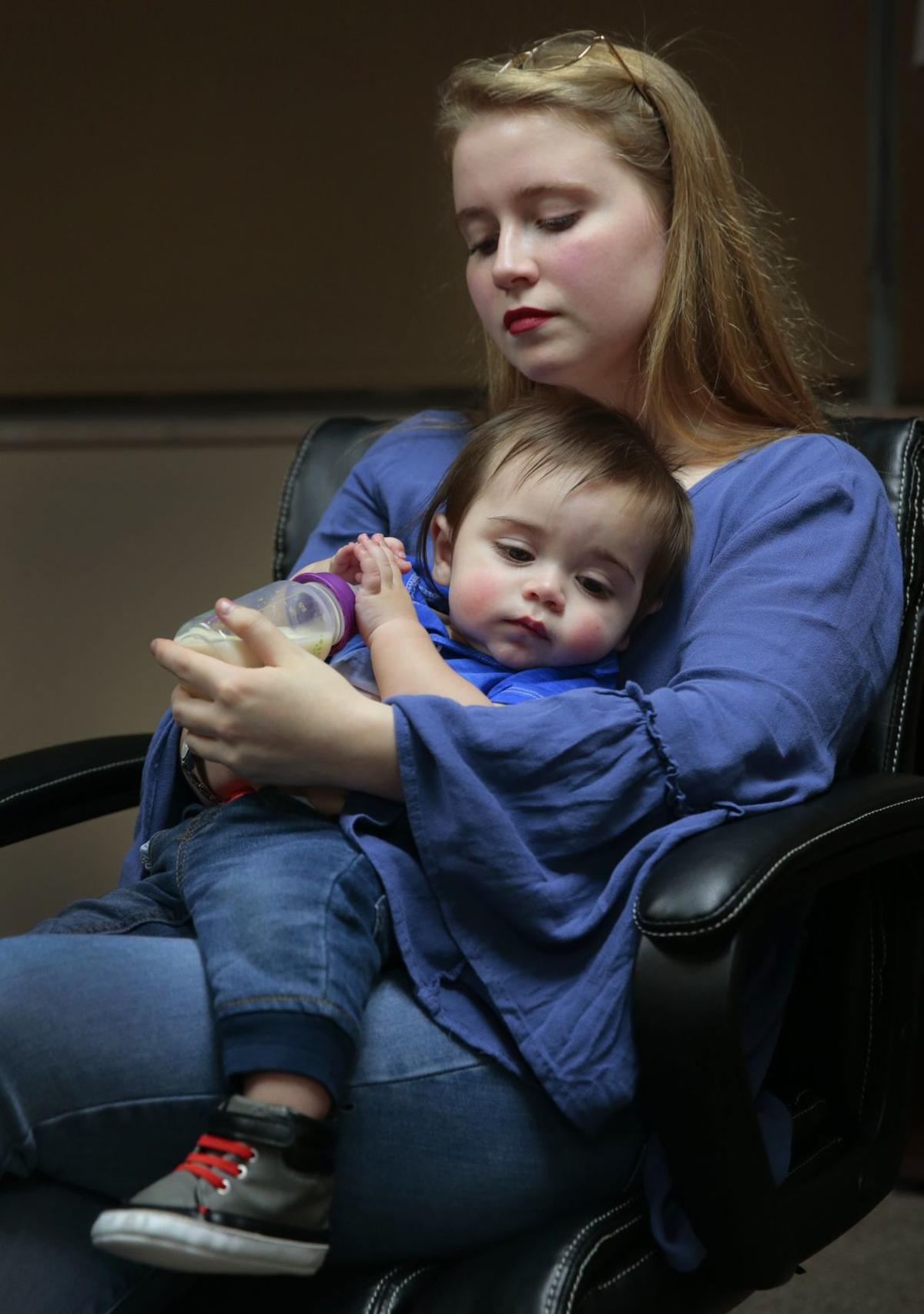 On her 18th birthday, Madison Dole holds her 8-month-old son Arjun Joshi as she speaks to a Post-Dispatch reporter in the office of her lawyer Tory Bernsen on Tuesday, Dec. 3, 2019. Dole's husband, Dr. Ashu Joshi, has pleaded not guilty to child pornography charges relative to their relationship. Photo by Robert Cohen, rcohen@post-dispatch.com. 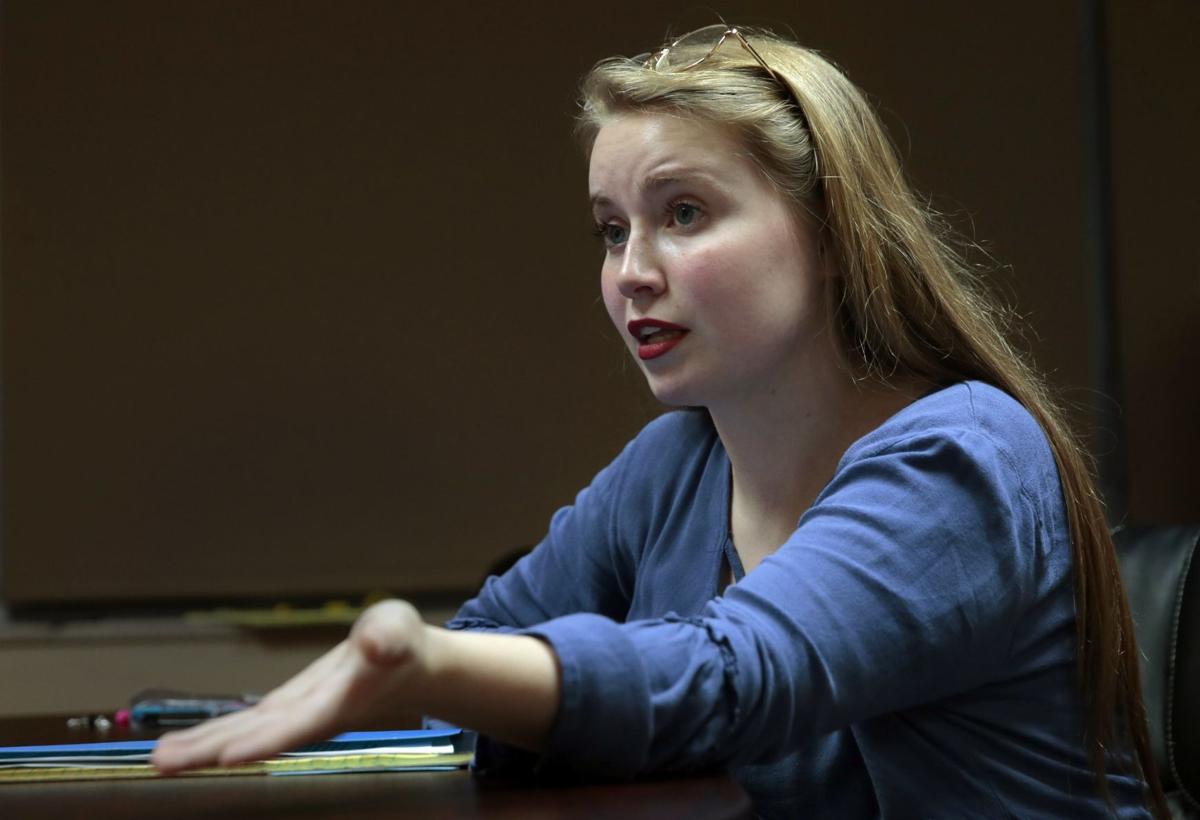 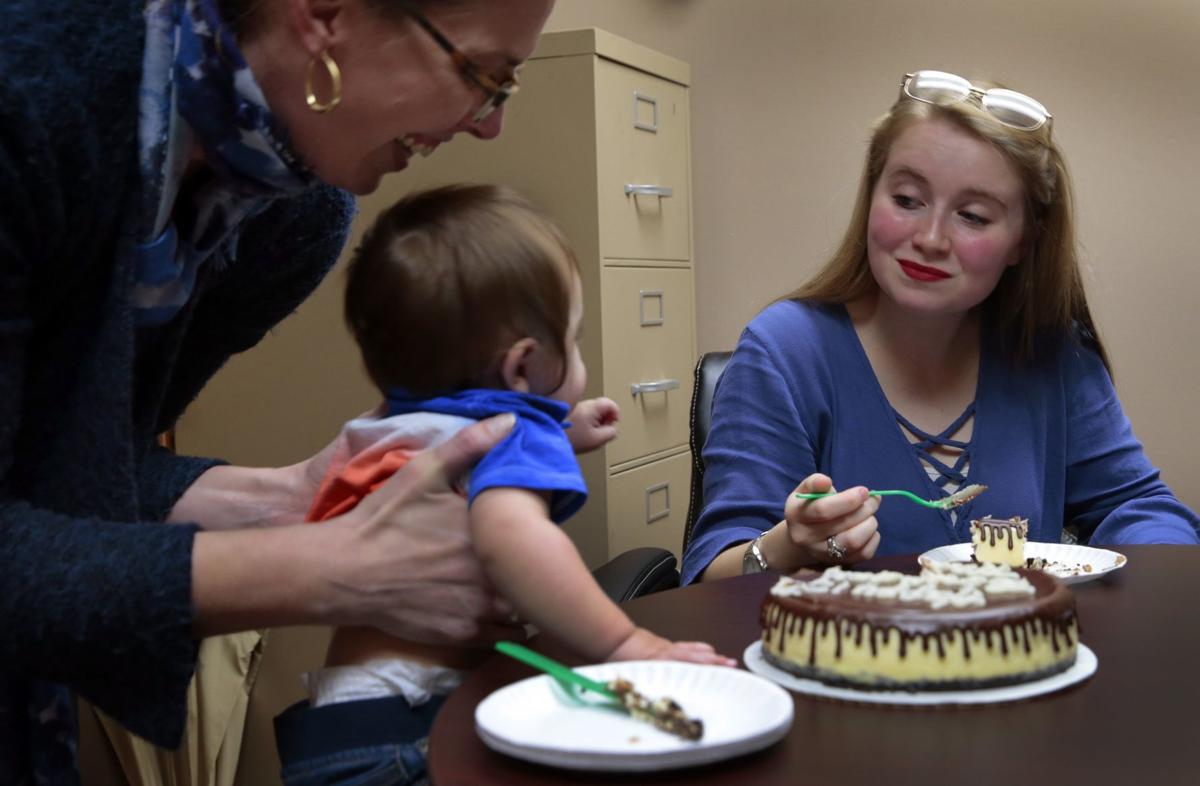 ST. LOUIS — The marriage last year of a St. Louis County doctor to a Kentucky 16-year-old is both valid and a legitimate defense to federal child pornography charges the physician is facing as a result of their relationship, lawyers for the doctor argue in recent court filings.

To Joshi’s wife, Madison Dole, and her lawyer, Tory Bernsen, the case raises questions of protections afforded to a married couple and also of privacy rights, such as ones meant to prevent the government and Facebook from snooping through their explicit messages. Dole, who turned 18 this month, wants the charges dropped and her intimate pictures returned.

“There’s nothing illegal about a husband and a wife sharing intimate photos,’ Dole told the Post-Dispatch. “Marriage matters. That should protect us from (government) being in our private lives. In our private relationship. In our sex life. That’s very private.”

Bernsen called it a “once-in-a-lifetime case,” saying it could end up before the U.S. Supreme Court one day.

The couple now has a son, Arjun Gabriel Spencer Lee Joshi, born in April, whom Joshi has barely seen and never held. Dole still lives in Kentucky. Joshi has been barred from contact with her while his criminal case is pending.

The Post-Dispatch does not normally identify victims of child pornography but Dole has agreed to have her name published as she and her lawyer seek to draw attention to the case.

Dole was born in Corbin, Kentucky. She calls it a “very small” town, mostly “trees and mountains and farms.” She fought tears while recounting her early years, when she was taken away from her biological mother and separated from all but one of her siblings.

“I’ve gone through things even worse than that when I was younger that I would never say on the record,” she said.

Dole said that Joshi and her adoptive mother have been friends for years, dating back to when Joshi worked in Kentucky. Her mother was a patient of his, prosecutors said.

In March 2018, Dole’s mother introduced her to the wealthy doctor who was then working at St. Louis University Hospital. Her mother “asked if I would be interested in dating him and learning more about his career,” she said. Dole said she was thinking about medical school at the time.

Dole said her mother had dated older men, and allowed one of her sisters to do the same.

“Usually where I’m from, that’s actually better for younger girls because we tend to be a lot more mature and have to grow up faster,” she said. Dole said boys her age are more interested in drinking and drugs than college.

Three months after meeting, the couple married in a private Hindu ceremony at a Bowling Green, Kentucky, hotel, Dole said. She said she wanted a family, and wanted to be married before she had one.

Bernsen declined to provide details and photos from the ceremony, saying the marriage is legal and that investigators have seized Dole’s phone.

Dole said she and Joshi had been keeping the marriage quiet until she turned 18 to avoid criticism both of her age and an interracial marriage.

Three weeks later, the law changed in Kentucky, outlawing marriage for anyone under 17. (Laws in Missouri also changed last year with the minimum legal age to marry rising to 16 years old from 15. Marriage at 16 or 17 requires the signed approval of at least one parent.)

A Kentucky judge last month declared the couple legally married. Dole went to the court hearing, along with Joshi’s Kentucky lawyer. Dole said the judge knew of Joshi’s criminal case in St. Louis and asked a handful of questions about the marriage.

In a series of legal filings, defense lawyers say that both the private wedding ceremony and the later Kentucky court ruling are valid, and that in “countless” Facebook messages the couple refer to each other as husband and wife. They also say Dole’s mother consented to and facilitated both a romantic and sexual relationship.

They say federal prosecutors have engaged in improper conduct by attacking the marriage and “chilling the voice” of Dole by ignoring her request that charges be dropped. Prosecutors, they say, have also blocked Joshi’s attempts to provide financial assistance to his wife and child, who are struggling financially.

Assistant U.S. Attorney Colleen Lang has responded in filings that the marriage is fraudulent. She said that Dole never mentioned the private marriage ceremony to investigators. The marriage was never mentioned in court until recently, and wasn’t discussed in hundreds of Facebook messages between the couple, Lang wrote.

“Further, the defendant asked the victim to call him, ‘Daddy’ in the Facebook messages,” Lang wrote in one filing.“The victim refers to the defendant as her ‘daddy’ well over 60 times. The defendant is not the victim’s father so the pet names they have for each other are little evidence of anything.”

She also said Dole’s adoptive mother told an investigator Nov. 27 that she had not consented to a marriage and had no knowledge of the private ceremony.

Dole told the Post-Dispatch that investigators never asked about a marriage. She discounts her mother’s claims, saying they are estranged and adding that her mother is worried about being judged or getting in trouble for introducing the couple. Dole’s mother could not be reached for comment.

Daniel Juengel, one of Joshi’s lawyers, said Joshi will reserve comment and make his arguments in court filings.

But Anders Walker, who teaches constitutional law at St. Louis University law school, was skeptical. “At the end of the day, I’ll be surprised if they win. Because child pornography is child abuse,” referring to court rulings that have found one tantamount to the other.

The defense could also say that prosecutors should pursue more egregious cases, or appeal to a jury’s sympathy, he said.

Joshi has pleaded not guilty in the case and earlier this month he rejected a plea deal that could have meant five years in prison.

Bernsen asked officials in a letter filed Monday for the return of the nude pictures at issue in the case. She said that Dole did not want anyone else, including a judge and jury, to see them.

In a her own letter filed Monday, Dole writes that no one should have access to the couple’s private images and videos, adding that she never wanted her husband prosecuted and asks that the charges be dismissed.

“We are a family, leave us alone,” she said.

Joshi is due back in court Jan. 10. Prosecutors are asking a judge to jail him until trial, claiming that he violated the conditions of his bond by having indirect contact with Dole through lawyers here and in Kentucky.

As hospitalizations skyrocket across the state, Missouri isn't providing complete data because of a glitch in a federal system.

The scale of the Covid-19 pandemic is exposing the battle scars of the country's most hardened public health officials.

The action followed a 4-3 vote by the council on Oct. 19 to approve two bills requiring council approval to extend emergency orders and health orders past 15 days.

US hits new COVID-19 record with no end in sight

"We easily will hit six-figure numbers in terms of the number of cases," Michael Osterholm, director of the Center for Infectious Disease Research and Policy at the University of Minnesota, said Friday night. "And the deaths are going to go up precipitously in the next three to four weeks."

The campaign aims to encourage residents to take precautions against COVID-19.

The state has seen a steep rise in cases over the course of October.

Hospitalizations in the state have increased steadily since September and hit record highs several times this month.

Hospitals are running out of beds or lack the intensive care units for more than one or two seriously ill patients.

On her 18th birthday, Madison Dole holds her 8-month-old son Arjun Joshi as she speaks to a Post-Dispatch reporter in the office of her lawyer Tory Bernsen on Tuesday, Dec. 3, 2019. Dole's husband, Dr. Ashu Joshi, has pleaded not guilty to child pornography charges relative to their relationship. Photo by Robert Cohen, rcohen@post-dispatch.com. 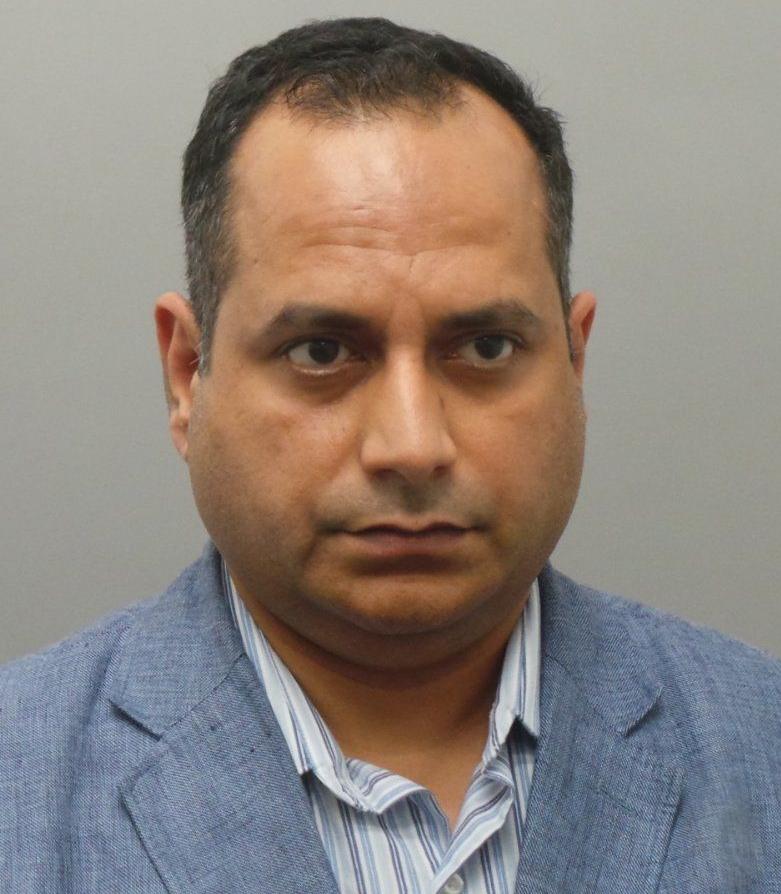