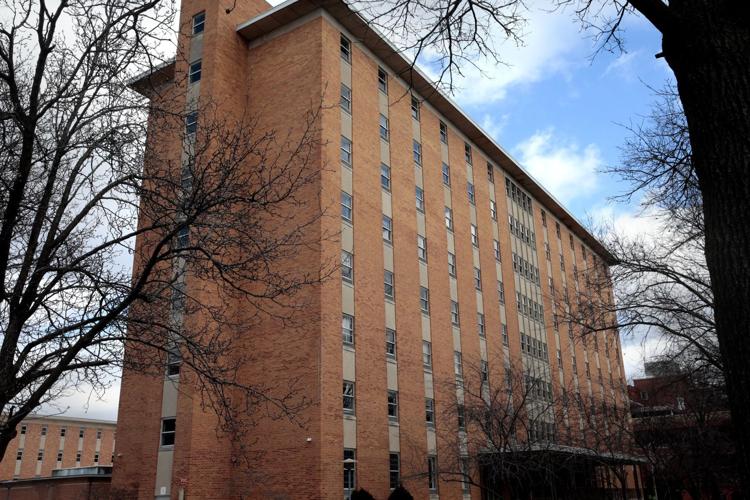 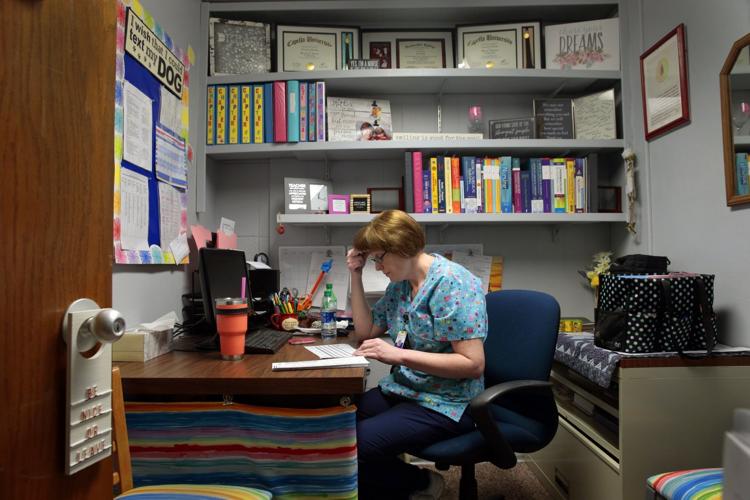 Celesta Sharp, then an instructor at the Lutheran School of Nursing, looks over pharmacology final exam results at the school on Friday, Feb. 28, 2020. The school closed this week, citing ongoing enrollment and financial challenges.

ST. LOUIS — The Lutheran School of Nursing, which first opened its doors in 1898 but has struggled in recent years with finances and enrollment, has closed.

Tina Hecht, CEO at South City Hospital, wrote a letter to faculty Wednesday announcing the news. The school is part of the hospital.

“It is with deep and heartfelt sorrow that we write to tell you that Lutheran School of Nursing will close effective immediately,” she wrote. “This has been one of the hardest decisions of our life.”

For years, hospitals have complained of staffing shortages, and the need for nurses only grew during the coronavirus pandemic. As health care workers took on more work, risk and trauma, often without much more pay, many left staff positions to work as contract nurses, which paid as much as three times more, or left hospitals altogether.

At the same time, the Lutheran School of Nursing was a “diploma” program, which can be faster and cheaper than other programs but do not award degrees to graduates and have been less common in recent years.

Hecht’s letter last week cited challenging enrollment and financial trends and said that running the school “is no longer an option.” It said the hospital had looked into other options for running the school but found no feasible solutions.

Officials at the hospital could not be reached for comment Sunday.

Christopher Guelbert, an alumnus who now teaches nursing, said, “It’s such sad news, since the school had been around since 1898. Just another sign of the times changing in health care.”

Many of the school’s students were older than college age, coming to the program from other jobs or careers. Students could finish their studies in about two years, instead of more common three-year programs, because it was a diploma program. Graduates are then qualified to take the state exam to become a registered nurse, just as with nursing students with college degrees.

The Lutheran School of Nursing was the last nursing diploma program in Missouri.

The school had been struggling for several years. In 2015 and 2016, its pass rate on the National Council Licensure Examination fell just below the 80% required for registered professional nursing schools.

The school was placed on “conditional approval status” and raised its scores above the cutoff level in 2017 and 2018.

But a 2019 report by the Missouri State Board of Nursing detailed problems with finances, faculty turnover and facilities. The school had to move out of one building because of problems with mold and pests.

In 2020, the school faced a hearing in Jefferson City to determine its future with the state nursing board. Before the hearing was held, at least four public officials sent letters to the nursing board, including then-mayor Lyda Krewson.

“(N)ot only does the nursing school serve the public and greater good in improving healthcare and outcomes for patients, but it provides a tremendous pipeline of skilled workers to our local hospitals and medical facilities,” she wrote.

This February, the school announced that it was not taking students for the upcoming term because of a “moratorium of admissions from the Missouri State Board of Nursing.”

South City Hospital, the 190-bed south St. Louis institution that ran the school, was formerly known as St. Alexius Hospital. In 2021, it was bought out of bankruptcy and renamed by SA Acquisition Group.

In April, the St. Louis Business Journal reported that the hospital’s staff had not been receiving their paychecks on time.

US to declare monkeypox a public health emergency

The U.S. will declare a public health emergency to bolster the federal response to the outbreak of monkeypox that already has infected more than 6,600 Americans, according to AP sources

Fenton-based Sunnyhill provided 24-hour care to Jason Uhlmansiek for nine years in his home. They left without a replacement.

While rest of US catches up, Missouri kids are still behind on their immunizations

Latest data shows just 91% of Missouri kindergarteners were caught up on required vaccinations.

A recent study found people who had alcohol delivered reported consuming more drinks and drinking on more days than people who obtained it through other methods.

In recent years, Missouri has been among the deadliest states to be pregnant or give birth.

In one of the biggest days of this year's primary campaign season, red-state Kansas rejected a measure that would have made it easier to restrict abortion, and voters in Missouri repudiated a scandal-tarred former governor seeking a Senate seat. Meanwhile, a Republican congressman who voted to impeach former President Donald Trump after the Jan. 6 insurrection lost to a Trump-backed opponent early Wednesday, while two other impeachment-supporting House Republicans awaited results in their primaries in Washington state. In Michigan, a political newcomer emerged from the state’s messy Republican gubernatorial primary, setting up a rare woman-vs.-woman general election matchup between conservative commentator Tudor Dixon and incumbent Democratic Gov. Gretchen Whitmer.

Vote counting continues in the close race to determine the Republican nominee for governor in Arizona, with former television news anchor Kari Lake narrowly leading lawyer Karrin Taylor Robson. The race is seen as a barometer of Donald Trump’s enduring influence after establishment Republicans came out in force behind Robson. Lake is closely aligned with the former president, who could gain allies with influence over how elections are run as he considers a 2024 White House campaign. The winner will advance to the November general election to take on Secretary of State Katie Hobbs. And Trump-backed Mark Finchem won the GOP primary to be secretary of state, who oversees elections.

Kansas voters have sent a resounding message about their desire to protect abortion rights by rejecting a measure that would have allowed the Republican-controlled Legislature to tighten abortion restrictions or ban the procedure outright. The vote Tuesday in a conservative state with deep ties to the anti-abortion movement was the first test of voters’ feelings about abortion since the Supreme Court overturned Roe v. Wade in late June. Voters rejected a change in the Kansas Constitution to ensure that it does not grant a right to an abortion, overturning a 2019 Kansas Supreme Court decision protecting abortion rights. Opponents predicted a ban would be coming if the measure had passed.

Celesta Sharp, then an instructor at the Lutheran School of Nursing, looks over pharmacology final exam results at the school on Friday, Feb. 28, 2020. The school closed this week, citing ongoing enrollment and financial challenges.