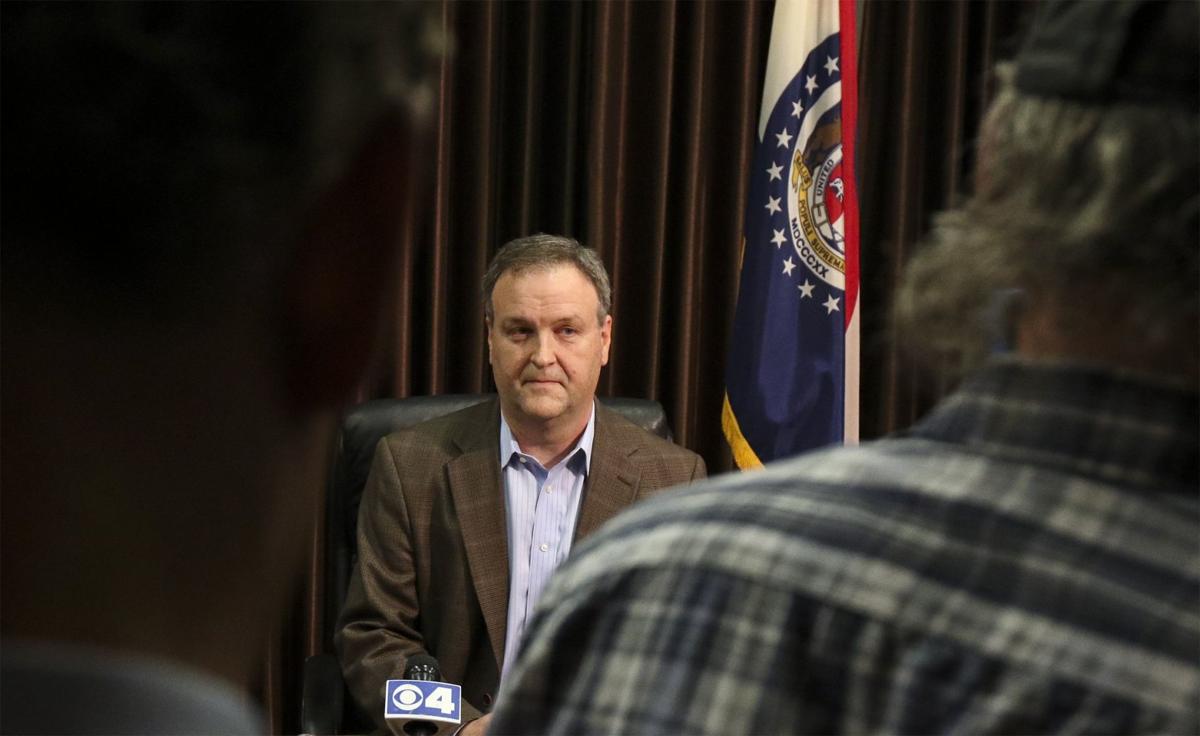 Dr. Sam Page, who was the architect of the St. Louis County prescription drug monitoring program, calls it “frustrating” to watch Missouri fail to adopt a similar program. Page, now county executive, is seen here at a press conference on April 30, 2019. Photo by Colter Peterson, cpeterson@post-dispatch.com 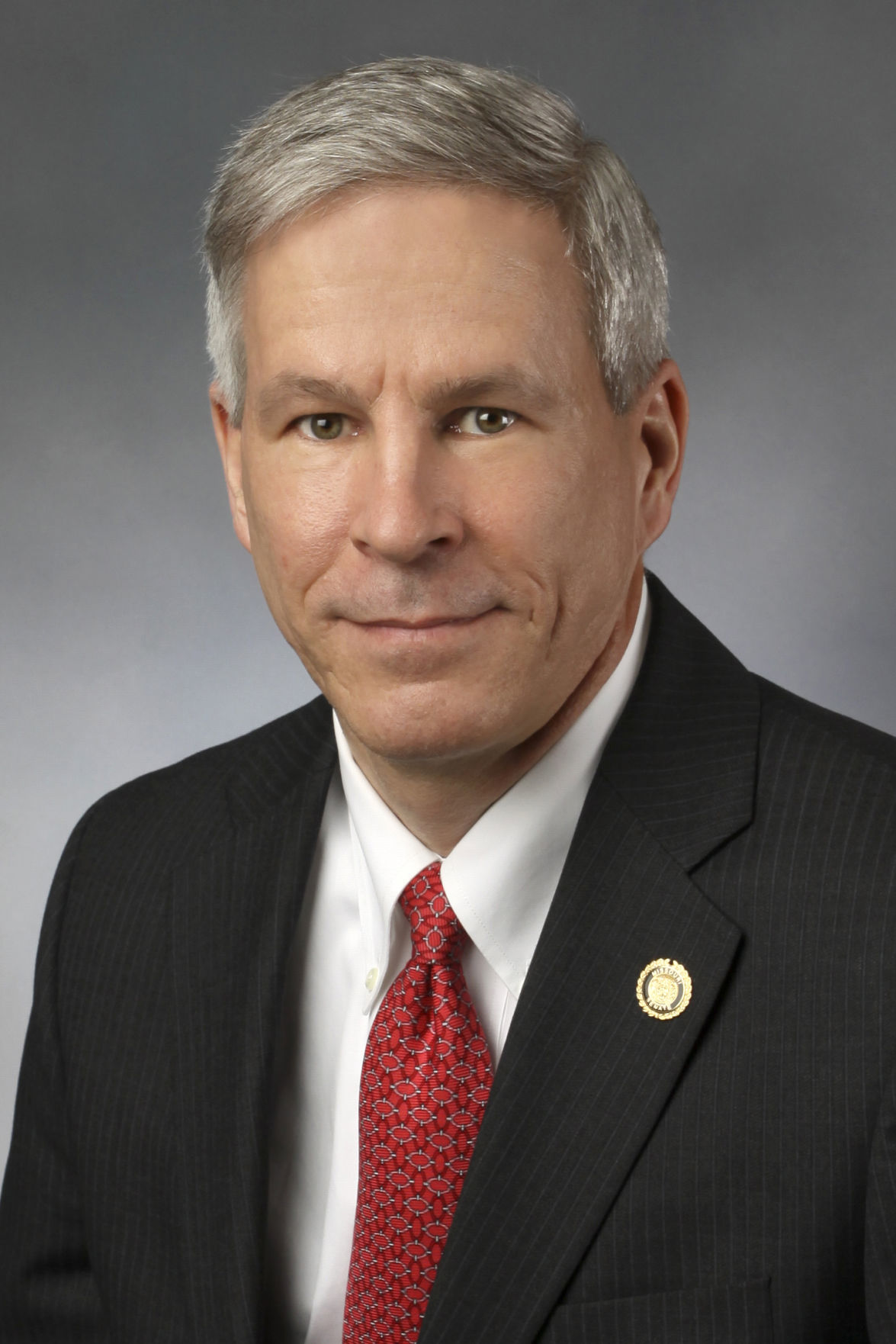 ST. LOUIS — Missouri retained its lonely title as the only state without a statewide prescription drug monitoring program — for the seventh year in a row — after the legislative session ended Friday.

Patient advocates, politicians, experts and members of the medical community had hoped this would finally be the year Missouri would create a statewide electronic database designed to help spot the abuse of prescription drugs. After all, Republican Gov. Mike Parson had pushed for it and, more important, its longtime opponent was no longer in office to block it.

But, because of ongoing fears about privacy violations tangled up with gun control, the bill never got a full Senate vote. And finance site WalletHub last week ranked Missouri third worst in the country for its drug use based on a review of arrests, overdose rates, opioid prescriptions and other measures.

Katie Reichard, a lobbyist with Missouri Primary Care Association who has been working in and around the Missouri Legislature for almost 15 years and previously pushed for the issue, said this proposal has bedeviled the state capital as none other while the opioid crisis continues to rage nationwide.

“I’ve never seen anything take seven years to get anywhere, and especially something that’s going to be put into place to save lives.”

Missouri’s cities, neighboring states and the federal government have been forced to create a patchwork of incomplete workarounds. Those include a voluntary program tracking patients’ prescriptions run by St. Louis County that receives federal funding and a statewide monitoring system put into place by former Republican Gov. Eric Greitens that tracks physicians’ prescriptions.

And yet, the state cannot seem to legislate a complete fix. “It’s frustrating to watch the rest of the country get this done and watch Missouri be the last one,” said Dr. Sam Page, the St. Louis County prescription drug monitoring program architect and current St. Louis County Executive.

To be sure, the databases don’t eliminate the ability of drug abusers to acquire prescription opioids. But the federal Centers for Disease Control and Prevention has called such statewide patient monitoring databases “among the most promising state-level interventions” to improve opioid prescribing and protect at-risk patients.

It’s an embarrassment Missouri can’t figure out its own statewide system, said St. Joseph pharmacist JulieMarie Nickelson. “No one in the pharmacy or medical world really understands it,” she said.

While a drug-monitoring bill has been introduced every year in the Legislature since 2005, it was initially championed by the minority Democratic Party, which meant it didn’t have much of a shot at passing until 2012.

Then New Hampshire approved a statewide program in 2012, leaving Missouri as the sole holdout. That pressure, combined with an uptick in awareness of drug abuse, led to a swell of bipartisan agreement.

Since then, Schaaf — who is also a family physician — filibustered or insisted on kill clauses that would never pass the House, citing his concerns over privacy and personal liberty issues along with his belief it was an ineffective tool. Year after year, his efforts defeated drug monitoring bills.

Schaaf has said the risk of a database of patient information being hacked — and the government having access to the information — far outweighed the potential benefits. He also tapped into underlying fears of privacy violations, driven in part by a 2013 scandal over the Missouri Highway Patrol turning over a database of concealed weapons permit holders to a federal agent.

“I’ve always been opposed to taking private citizens’ information and putting it on a government database to which many, many people have access,” he told Kaiser Health News. “My understanding is there is no computer information to which the NSA is not privy. How long is it going to be ’til this is used to pare down the number of people with concealed weapons or weapons at all?”

By stoking privacy fears and connecting them to gun rights, Schaaf also helped tap into grassroots far-right opposition that lives on to this day. A YouTube video tweeted by opponents of prescription drug monitoring programs details how the St. Louis County system could be used in “passing your personal information on to the federal government, which could use it to infringe on your right to bear arms.”

To date, the only reported hack has been of Virginia’s database, though it is unclear if the hackers were able to access medical records.

Over the years, Missouri’s drug monitoring advocates, led by Republican Rep. Holly Rehder, unsuccessfully tried to assuage such concerns by offering amendments to delete records older than three years and to ensure medical information could not be tied to buying a gun. And while Schaaf did an about-face in 2017 and agreed to stop filibustering the proposal, he effectively killed it with his only stipulation: that all physicians be required to use it. That measure, which took away the inherent voluntary aspect of the program, failed in the House.

“If they’re going to take our liberty away for something that’s never been proven to work, doctors have to use it,” Schaaf told Kaiser Health News.

The former head of the St. Louis County Health Department, Faisal Khan, who in 2017 helped start the voluntary county-based prescription drug monitoring program that now covers other portions of the state, claims the opposition goes deeper than what he called “totally unfounded” privacy concerns.

“They view St. Louis County and St. Louis city and St. Louis, in general, as this liberal Democratic bastion that they don’t want anything to do with,” he said. “It’s the usual nonsense that we’re seeing around the country at the moment, and it’s stymying progress in the parts of the state where we need it the most.”

But this year, Schaaf had hit his term limit of eight years in office and did not return to the Missouri Senate. Passing a prescription drug monitor program finally seemed within reach — until a group of six Republican state senators formed a new conservative caucus and filibustered yet again over the issue, citing the same privacy issues and civil liberties.

“The conservative caucus has carried his torch on,” Reichard said.

A series of workarounds Now, because the legislature has refused to move on the issue, cities, states and the federal government must continue to rely on the stopgaps they created to help address the opioid problem ravaging Missouri.

Today, 72 jurisdictions have opted into St. Louis County’s voluntary prescription drug monitoring system so pharmacists and doctors could check a patient’s other prescriptions. It now covers 84% of the state’s population.

Even St. Joseph, one of the areas hardest hit by the opioid epidemic and where Schaaf lives, joined last year.

For Nickelson, a pharmacist at Rogers Pharmacy in the city of about 76,000 people, the voluntary database means she no longer has to spend upward of 30 minutes on the phone tracking down whether a patient had prescriptions for drugs elsewhere.

Since her city’s voluntary PDMP has been in effect, she estimates she sees a handful fewer people each week who were doctor-shopping, a particular risk considering the pharmacy is less than 5 miles from the Kansas border.

Missouri was a premier destination for pill-shopping, Page said, but that’s changed.

“Our PDMP is first-class, as any in the country,” Page said. “We have gaps, but those will continue to fill in. If the state continues to not move forward with this, then St. Louis County will continue to do the right thing.”

And while St. Louis County built its voluntary database in part with $200,000 from the U.S. Department of Justice, interstate sharing of the data with neighboring Illinois, Kansas and Oklahoma didn’t happen until February. Eight states border Missouri and more states are expected to collaborate with St. Louis County’s system this year. But data-sharing can occur only among states that have managed to bend or rewrite their regulations to accommodate the one state in the nation without a statewide program.

The system that Greitens created when governor, along with Express Scripts, to monitor physicians’ prescriptions for unusual patterns led to 50 referrals to the Missouri Healing Arts Board — the disciplinary board for medical practitioners in Missouri — for prescribing issues since March 2018, according to Missouri’s head of Health and Senior Services, Dr. Randall Williams.

Ideally, Williams said, he would love to combine a statewide version of the voluntary PDMP system with Greitens’ physician-monitoring one, but he’s waiting on the legislation.

Reichard can’t help but wonder why the state won’t join the rest of the nation in passing it.

“I’m not saying do what everyone else is doing,” she said. “But if 49 other legislatures are saying ‘This is important, we need to save lives,’ I don’t understand why Missouri can’t find a way to compromise and do what’s best for its citizens.”

Kaiser Health News is a nonprofit news service covering health issues. It is an editorially independent program of the Kaiser Family Foundation that is not affiliated with Kaiser Permanente.

Ned Presnall says he was dropped as a consultant after questioning state’s funding priorities, angering coalition of traditional treatment providers.

Why you need more Vitamin D in the winter

It can be difficult to get enough vitamin D in winter. Should we take supplements? How do we get more? And, who needs it most?

Dr. Sam Page, who was the architect of the St. Louis County prescription drug monitoring program, calls it “frustrating” to watch Missouri fail to adopt a similar program. Page, now county executive, is seen here at a press conference on April 30, 2019. Photo by Colter Peterson, cpeterson@post-dispatch.com