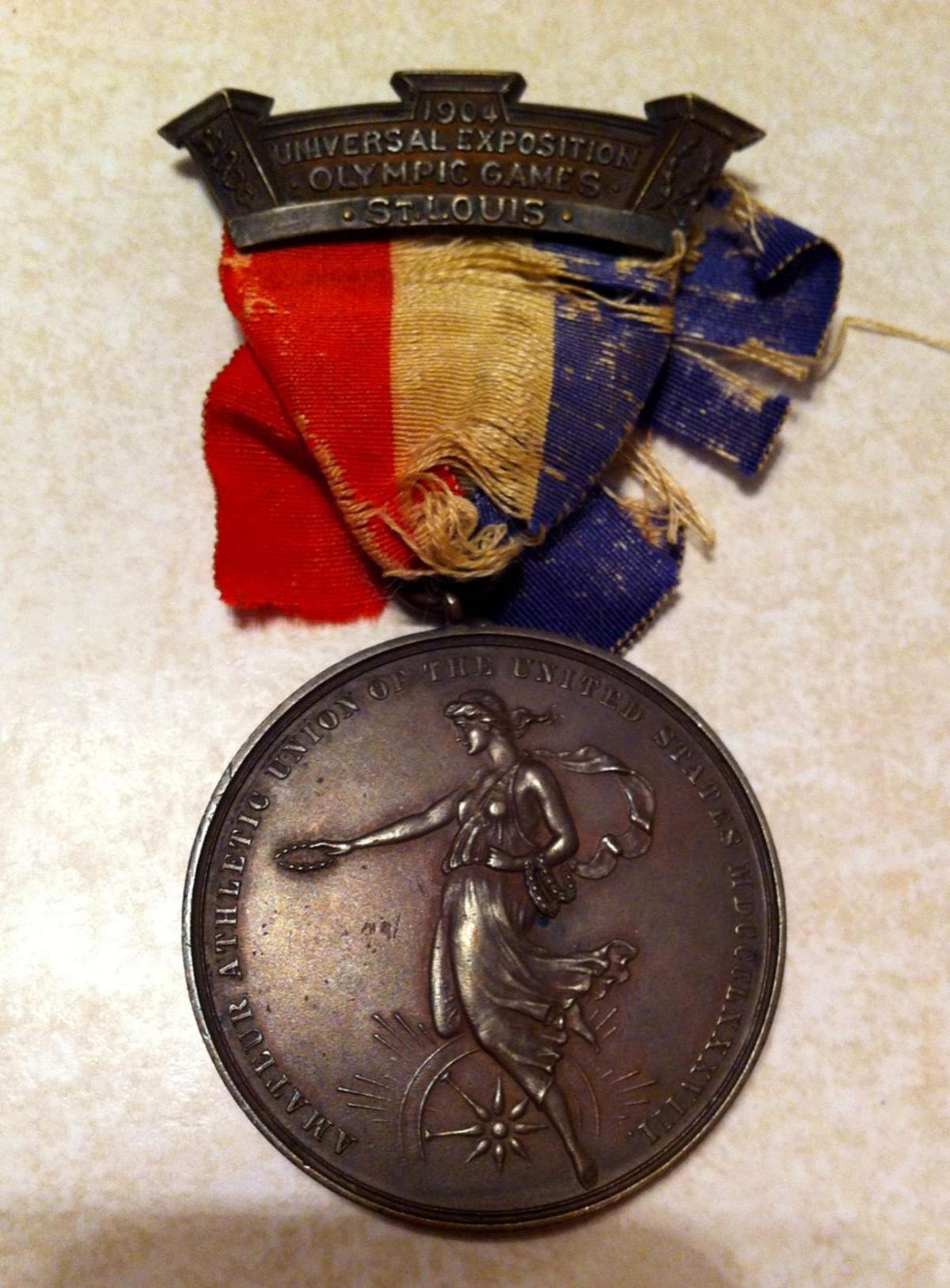 Gustav Tiefenthaler won a bronze medal in the 1904 Olympics for freestyle wrestling. This was the first and only time Olympic medals came with a ribbon attached to a pin. 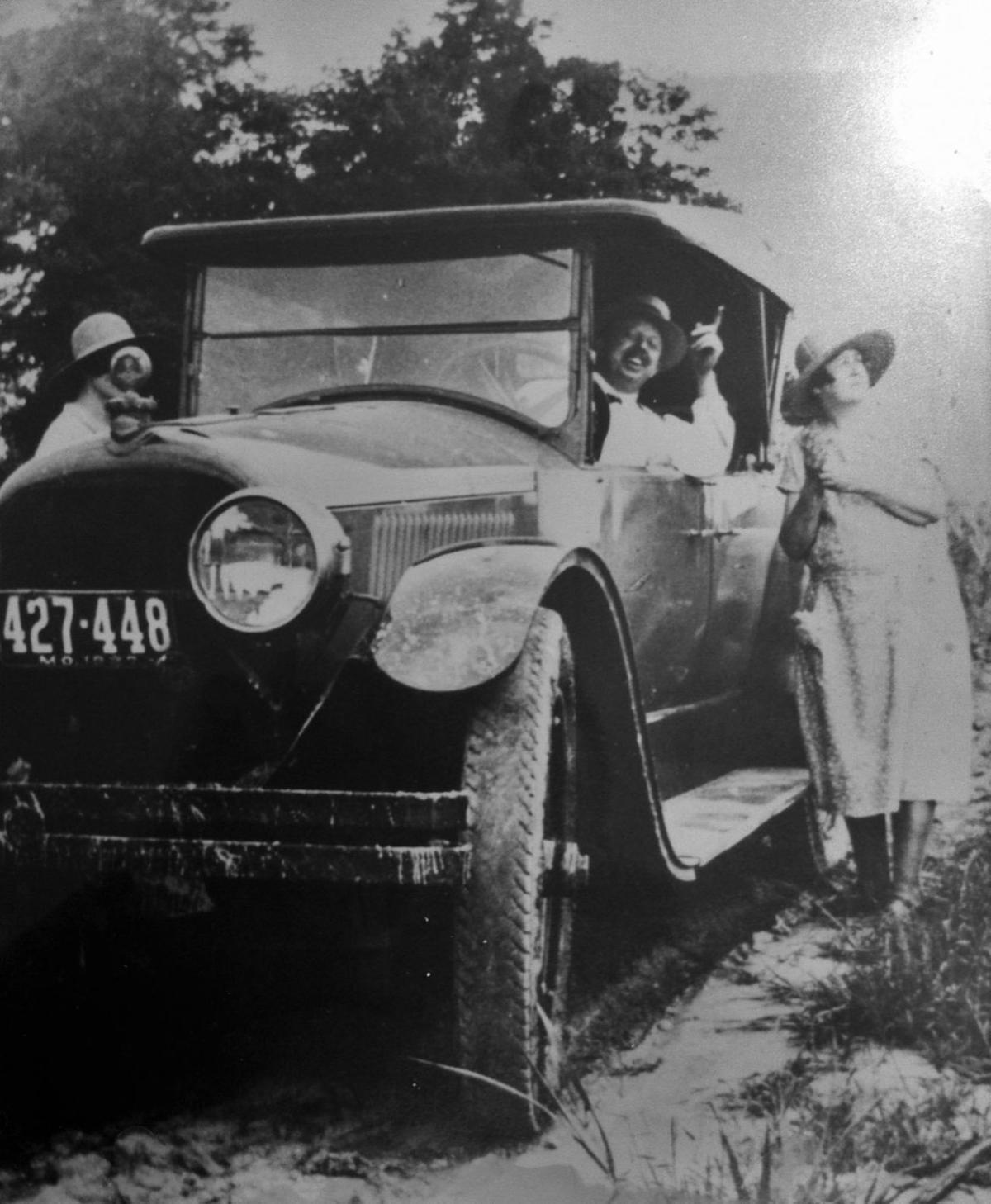 Gustav Tiefenthaler won a bronze medal in the 1904 Olympics for freestyle wrestling. He is pictured in the driver's seat of a sedan from the local Dorris motor car company, along with his wife (left) and mother-in-law (right). 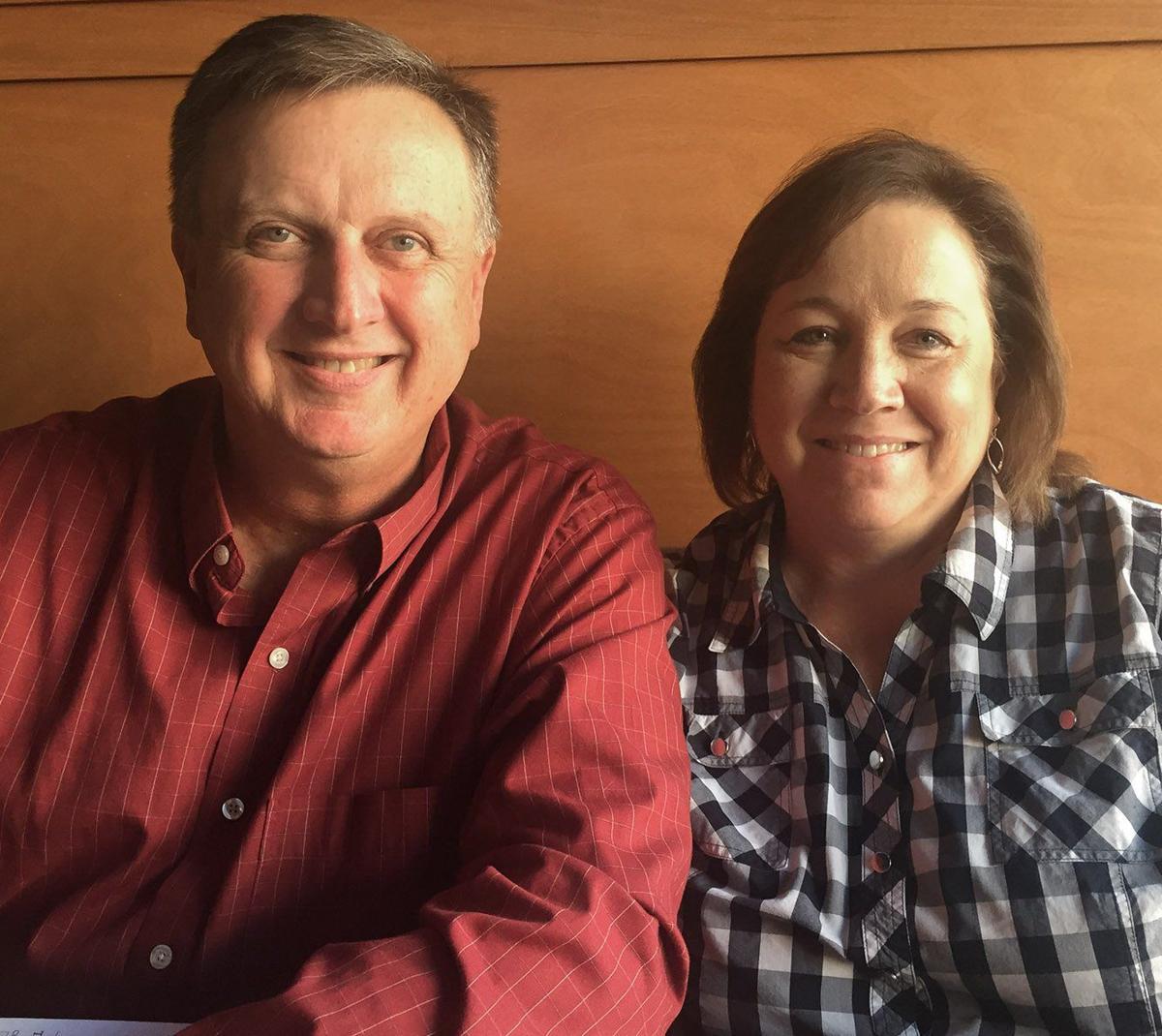 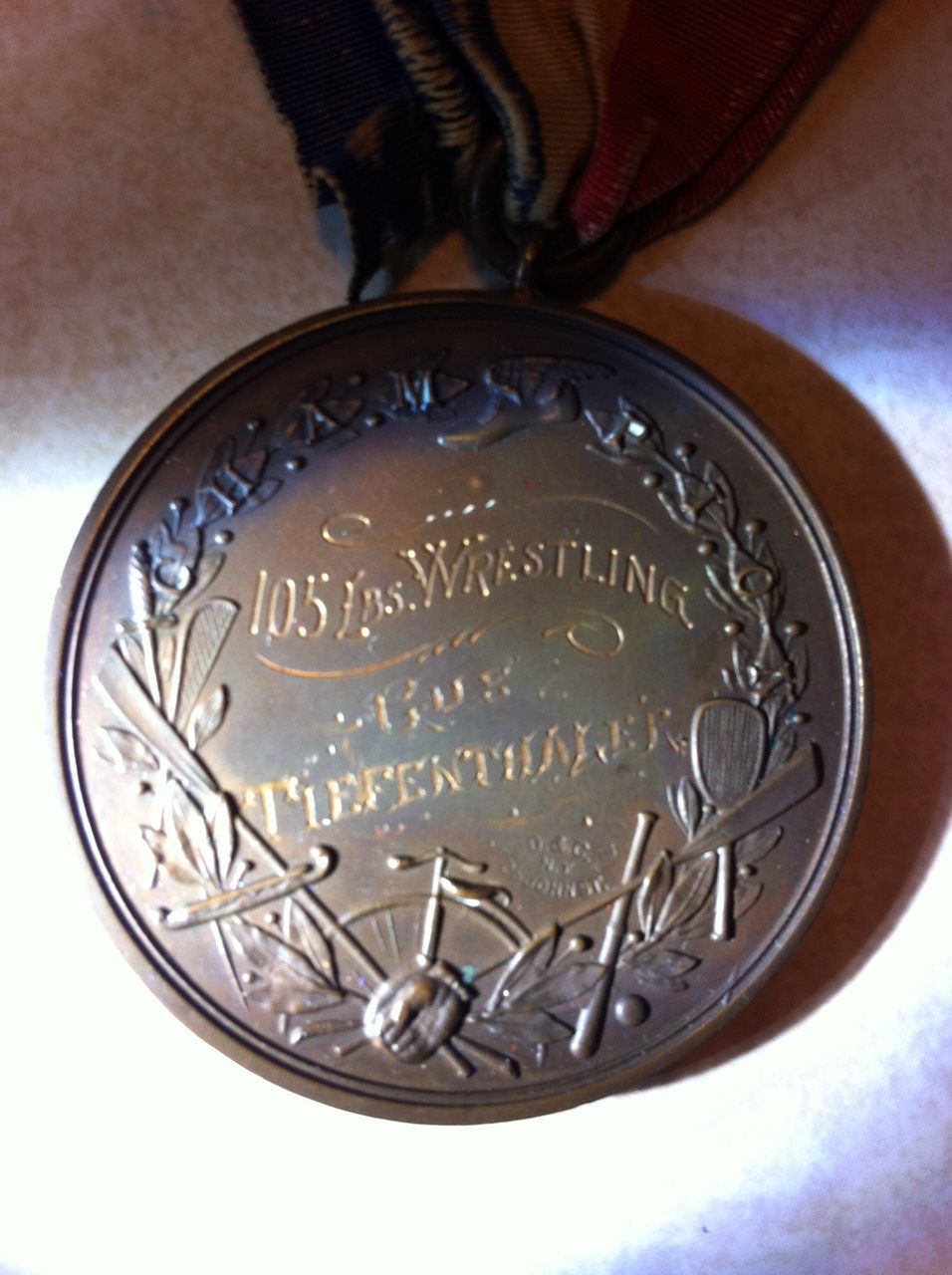 Gustav Tiefenthaler won a bronze medal in the 1904 Olympics for freestyle wrestling. This was the first and only time Olympic medals came with a ribbon attached to a pin. This side of the  medal is engraved with his name and weight.

Gustav “Gus” Tiefenthaler was only 18 years old, and at 105 pounds, a little guy. More than a hundred years after his Olympic victory, he makes his grandchildren and great-grandchildren proud.

They’ve passed around Tiefenthaler’s bronze medal he won for freestyle wrestling in the 1904 World’s Fair in St. Louis. Right now, David Tiefenthaler of Salem, Mo., has it, locked in a safe. Before that, David’s cousin Randy and his wife, Bev Tiefenthaler, of Troy, Mo., kept it in their home, locked up.

It’s engraved “Gus Tiefenthaler” and “105 lbs. wrestling,” and hangs from a tattered red, white and blue ribbon, attached to a pin that would have been fixed to his chest. It was the first and only time Olympic medals came with such pins and ribbons.

Randy Tiefenthaler, 58, never knew his grandfathers, and his father died in a traffic crash when he was a baby. “I have a greater interest in family history than maybe the average person would,” he said. “It’s a sense of pride to see (the medal) in the family.”

The Olympic games didn’t get too much attention here in St. Louis, largely because it was overshadowed by the World’s Fair and also because at that time, there wasn’t much international competition. It was more about pitting one American athletic club against another, said Sharon Smith, curator of civic and personal identity at the Missouri History Museum.

Athletes had to find their own way to the games, and there wasn’t much drawing them to the Midwest, she said. The museum has one Olympic medal in its collection, a silver awarded to Charles Rose for tug of war, and several unawarded blanks and badges that officials wore.

The 1904 Olympics also produced some events that are cringeworthy today: for instance, the “Anthropology Days” competitions by people from distant countries “exhibited” at the fair and a marathon run in St. Louis heat and humidity where water was not allowed, but strychnine, egg whites and brandy were.

Still, St. Louis had the claim of hosting the third Olympic games in modern history, and the first Olympics in the United States. It was also the first time that gold, silver and bronze medals were offered for first, second and third place. It was also the first year an African-American, George Pogue, medaled in the Olympics — he won two bronzes for track and field events.

Gus Tiefenthaler competed in freestyle wrestling, commonly known as “catch as catch can,” and 1904 was the first year it was added as a sport. Tiefenthaler was also the youngest wrestler in the competition. Only about 650 athletes competed in 95 events, and only Americans competed in wrestling events, which took place on Oct. 14-15 at what is now known as Francis Field at Washington University.

“By today’s standards, it wasn’t very big,” said Randy Tiefenthaler. “But nothing is when it starts out. But it was the beginning of the modern Olympics.”

Gus Tiefenthaler, who came to St. Louis from Switzerland, wrestled for the South Broadway Athletic Club. Randy Tiefenthaler doesn’t know too much about his grandfather’s wrestling career except for what he’s pieced together through websites and newspaper archives.

Tiefenthaler continued to wrestle after his Olympic appearance. “Tiefenthaler is one of the cleverest featherweight wrestlers in the city and the ‘Fighting Harp’ will have a hard time making a showing against him,” said one newspaper report about a “wrestling show” held four years later in St. Louis.

He worked as a wrestling promoter, arranging bouts at Sportsman’s Park. He even turned over profits to help athletes go to the Olympic games. “I came into the wrestling promotion business with the flat declaration that I didn’t care whether I made anything out of it or not, so long as I could get an even break,” he told the Post-Dispatch in 1924.

He was also president of the chain of Wisconsin Creamery Stores, which had several locations in St. Louis, and grossed $1.1 million in revenue in 1930. The only photo the family has of Tiefenthaler shows him in the front seat of a sedan from the local Dorris motor car company, his wife, Viola, and mother-in-law standing next to it. He’s smiling and pointing upward, looking like he’s enjoying a good life.

They lived in a Spanish-style home on Audubon Drive in Clayton, in the upper-class Moorlands Subdivision. A front page story in the Nov. 18, 1929, issue of the Post-Dispatch detailed a robbery at the home: two robbers waited nearly three hours guarding a maid while they waited for the Tiefenthalers to arrive home. “This is the longest wait I’ve ever had for anything,” one of the robbers complained.

When Gus Tiefenthaler walked in the door, he was holding his two-year-old son Donald (Randy Tiefenthaler’s father), along with a paper bag containing store receipts and cash. The robbers got away with $2,000 in jewelry and the $5,000 in the bag.

Gus and Viola had two sons, Donald and Rich, and the grocery business eventually went under, likely a victim of the Depression. Gus Tiefenthaler’s generosity may have played a role. “I remember Grandma T said that he didn’t know a stranger,” said Bev Tiefenthaler. “People couldn’t pay their bills, so I think he did it for them. Then he couldn’t pay his own bills.”

Gus and Viola got divorced, and Gus died in 1942 at age 55. She died in 1995 at age 93. It was hard getting Viola to recount too many details about her life with Gus, her family said.

David Tiefenthaler, who has the medal now, says it’s been a conversation piece. “When I was younger, people would say, ‘Oh, you’re the athlete in the family.’ I’d say, ‘No, it’s my grandpa. He won an Olympic medal.’”

#stlstuff is a regular monthly feature of the STL Life section. Keep sharing your historical St. Louis artifacts by using the #stlstuff hashtag on Twitter, uploading them in our album at stltoday.com/stlstuff, or mailing them to vhahn@post-dispatch.com.

More in #STLstuff: Local treasures tell the story of our area (6 of 17)

#STLstuff: Local treasures tell the story of our area

What's just "stuff" to one person might be a treasure to another. We're collecting stories of #stlstuff, the local treasures that deserve to g…

Got a piece of #stlstuff? We want to hear about it.

For more than a year, we've written about your pieces of St. Louis history, and want to keep the fun going.

Gustav Tiefenthaler won a bronze medal in the 1904 Olympics for freestyle wrestling. This was the first and only time Olympic medals came with a ribbon attached to a pin.

Gustav Tiefenthaler won a bronze medal in the 1904 Olympics for freestyle wrestling. He is pictured in the driver's seat of a sedan from the local Dorris motor car company, along with his wife (left) and mother-in-law (right).

Gustav Tiefenthaler won a bronze medal in the 1904 Olympics for freestyle wrestling. This was the first and only time Olympic medals came with a ribbon attached to a pin. This side of the  medal is engraved with his name and weight.