The rise of the Zoom happy hour: St. Louisans move their social lives online
0 comments
Share this
Subscribe for $5 for 5 months
1 of 4 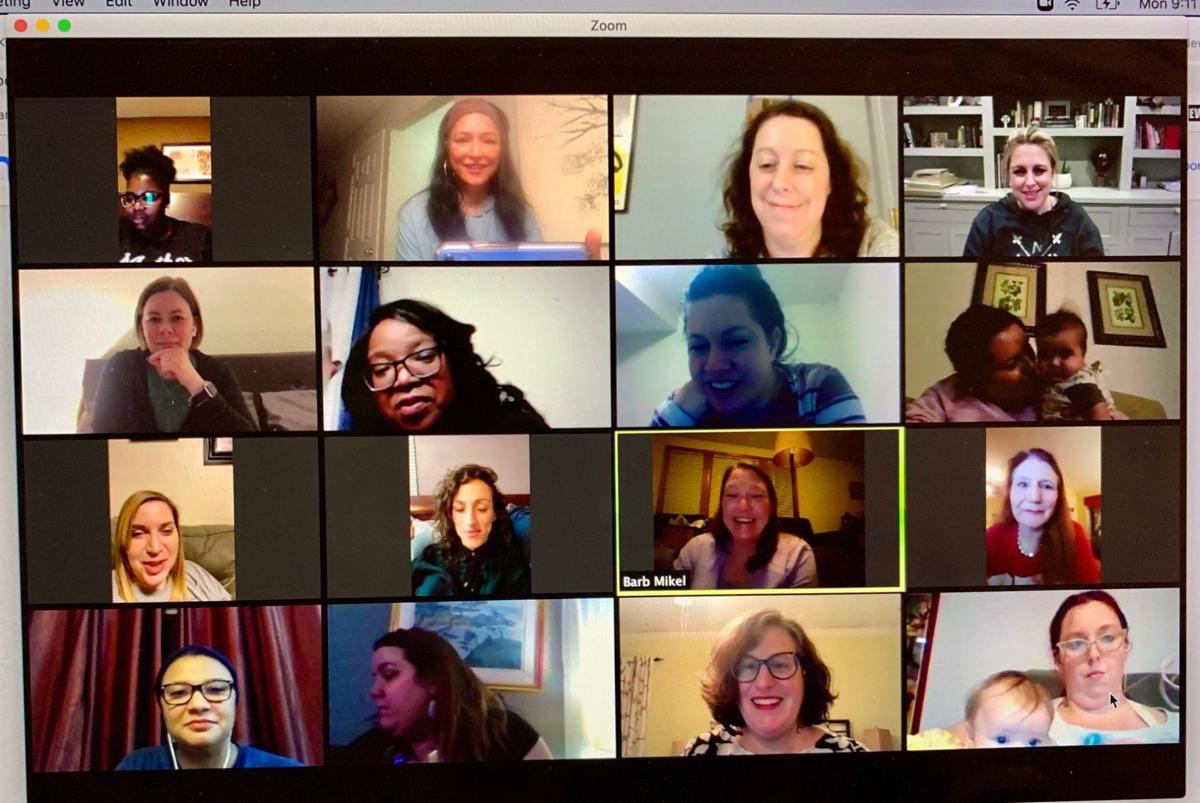 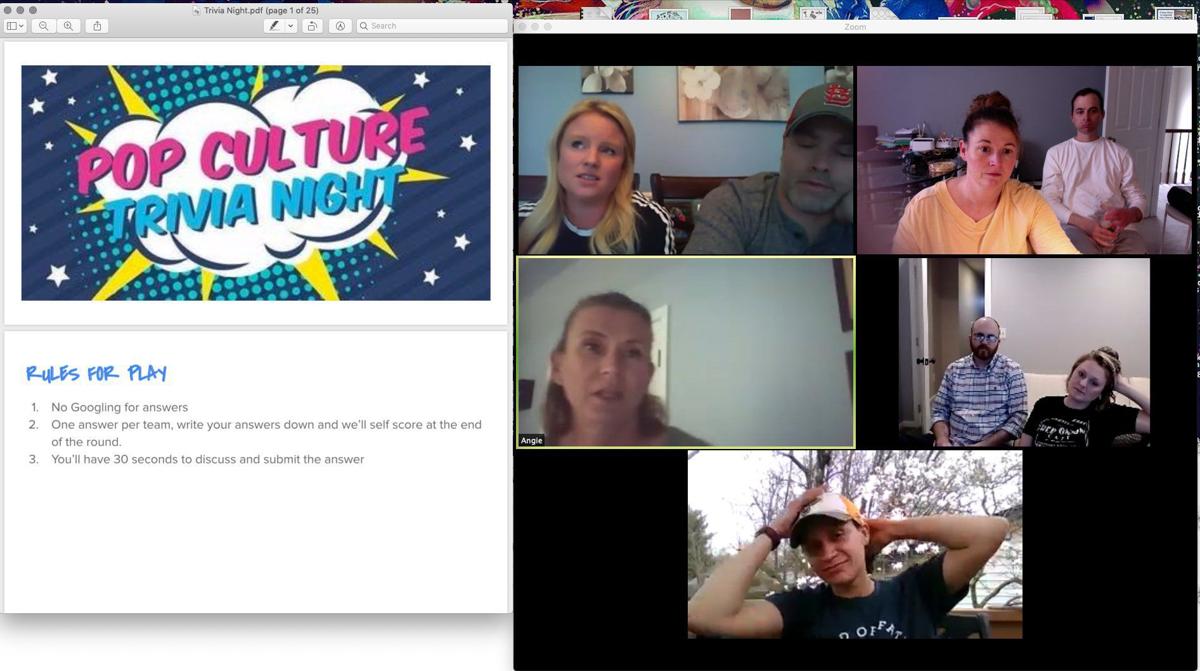 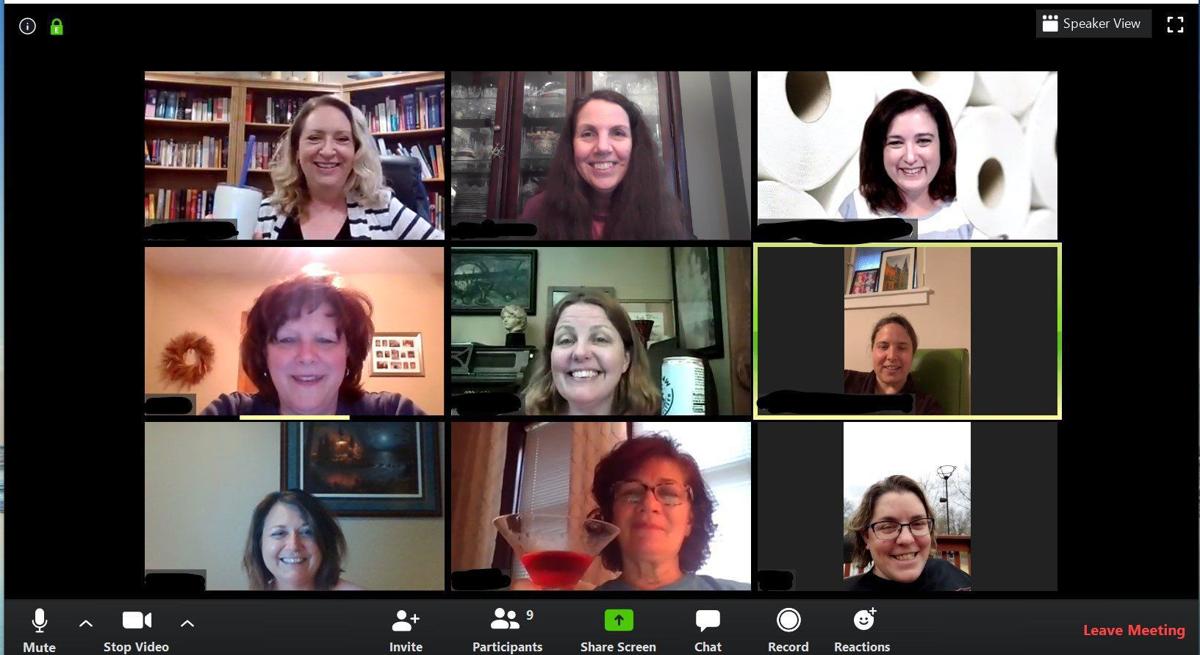 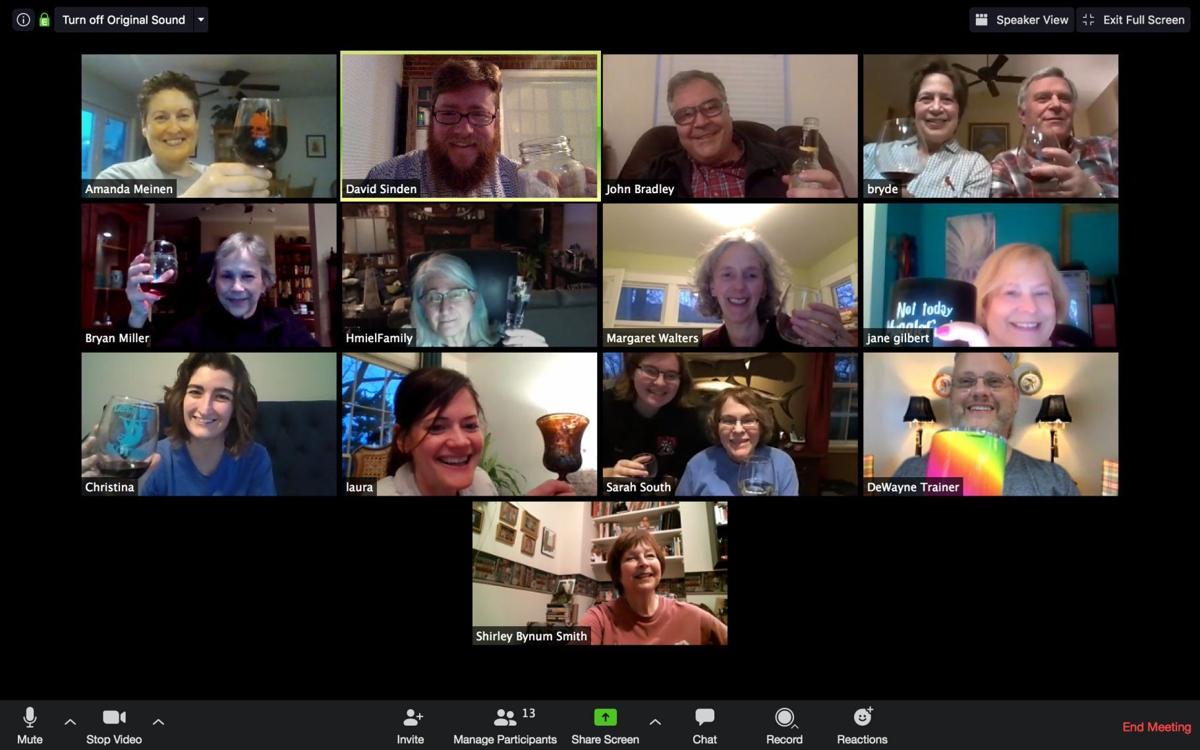 Members of the choir at St. Peter's Episcopal Church in Ladue use Zoom to meet each week.

I’m trying to muster the motivation to attend my first Zoom happy hour. It’s been a month since I’ve congregated in any kind of social setting. I’m not feeling enthusiastic about connecting online with a group of moms from a Facebook group whom I’ve never met in person.

But my editor asked me to write about how we’ve found ways to socialize online in this socially distant world, so I force myself to look presentable.

I’m not going to know anyone there, I think to myself. This is probably going to be awkward, but I still rub concealer under my eyes to hide the dark circles. I look for a wide headband to cover an inch of gray hair regrowth. I double-check to make sure I’m wearing a bra, which like so many of us has been rendered nonessential during a pandemic lockdown.

At the last minute, I put on my favorite pair of hoop earrings because these small rituals of getting ready have already perked me up from the general malaise of the past month.

I click the organizer’s Zoom link and type in the meeting code.

Instantly, my screen is filled with a grid of women who also seem a little weary and perhaps ready to vent. The hostess, Heather Fleming, an education consultant in St. Charles, is drinking her second dirty martini and might already be a little buzzed.

In another virtual room ...

Melody Meiners, a marketing assistant in Ballwin, knows herself well enough to have signed up for a Zoom Pro account, which costs $14.99 month and comes with more bells and whistles than the free version.

“I’m too social not to hang out with people,” Meiners said. She recently hosted her first trivia night and invited five other couples. She went through her Trivial Pursuit deck and pulled out entertainment questions, then used Google Slides to make a trivia game. She was able to share the slides on the Zoom screen with the other participants, and they played on an honor system.

The event was such a hit that Meiners is planning a second game night using a free online version of Cards Against Humanity, with about 20 couples participating.

“Everyone heard how much fun it was” and wanted to join, she said. During the trivia night, one kid got bitten by a lizard.

She had a request from one of the parents for the next game night: “Can we do this after the kids are in bed, so we can stay up later?”

Back in the original room ...

Back in my happy hour, a participant’s husband accidentally steps on her wine glass resting on the floor. She holds up the shattered wreckage to show us. One of the moms loudly laments the loss of the spilled wine. Her husband is unhurt, and the conversation is getting bawdier by the minute.

This is kinda fun.

Kitty Lasinski, an education product manager in Fenton, joined her book club via a Zoom meeting instead of their usual potluck. She had been working from home for more than three weeks, and this was her first online social event.

“I was really happy to see people I hadn’t seen in a while,” she said. “It’s kind of reassuring to see faces of a bunch of people who are doing OK.”

They took some time to catch up and laugh, although it was hard to separate current events from their eventual book discussion. Before the coronavirus dominated the local headlines, they had chosen to read “The Dreamers,” a novel about a mysterious, highly contagious virus that suddenly surfaces in America. It spreads rapidly, overwhelming hospital systems, and has no treatment and no vaccine.

Despite the eerie parallels, she said the meetup managed to take her mind off the real-life doom and gloom. Normally, their book club rotates monthly among their homes. But the virtual version was such a success that they are trying to schedule meetings for every two weeks.

Back to the original room ...

One of the moms in my happy hour is complaining about her employer making her come into the office but letting nearly everyone else work from home — despite the fact that her kids are out of school. She quickly says she knows she is lucky to still have a job, and Fleming, our host, shares that as the owner of a small business she has zero income. We all agree that the other woman’s employer is being a jerk.

“The idea of us not meeting was really hard for me to take,” he said. So he set up a Zoom meeting during their regular rehearsal time. About half of the 30-member choir showed up.

That included Bruce Ryder, a member of the second tenor section, who lives in unincorporated west St. Louis County. He had never attended a social event online.

“It’s very important to maintain contact with other people to know how they are dealing with the situation,” he said. “I think it helps to increase the feeling that we are all in this together.” He especially enjoyed being able to see his friends smile when they talked to one another.

Sinden said Zoom’s lag time in individual connections makes it impossible to actually rehearse singing together. But he’s going to send the choir a guide track and ask each of them to record themselves singing the same piece of music.

He plans to use editing software to layer the individual recordings and simulate the sound of them singing together.

“I’ll do my best to make it sound like we are in the same room.” Sinden said. “It’s the best we can do at this point.”

Back to the original room ...

My happy hour is going on two hours, the gossip is flying, and a few ladies are definitely drunk. Fleming honed in on me, after I had been quietly observing for much of the evening: “So, how are you doing?” Plenty of friends had asked me this same question over the past few weeks, and I had put on a brave face for them.

In this group of strangers, I admitted it has been difficult to hear the kinds of stories I’ve been hearing and reading the past several weeks. Fifteen women, all strangers to me before this night, nodded sympathetically. They listened. They understood.

Fleming warned me not to make her cry. She laughed, friendly and boisterous, and said my face was looking like it was about to cry.

Her laughter helped me blink back my tears and laugh, too.

I had to slip out of the party before it ended, but I made a mental note to mark the next one on my calendar.

How to be a good virtual host

There are several platforms available for gathering groups of people online. In addition to Zoom, there are Houseparty and Squad apps, Google Hangouts, Facebook, WebEx, Whereby, Skype and iPhone's FaceTime. Regardless of which platform you choose, here are some tips to make your virtual event a success.

• Choose times that will be convenient for most people in your group. For parents with young children, this might mean after the kids have gone to bed.

• Set some ground rules and share expectations around confidentiality for what is said.

• Make it safe. The conversation topics can range from serious to funny.

• Let the conversation flow naturally, but have some conversation starters in mind. For example: What are you watching on TV? How’s homeschooling going? How is this affecting your relationships? For those in essential jobs that require them to be on front lines, check in on their mental health.

• Check in on people who have been mostly quiet and draw them into the conversation.

• Be patient in helping others figure out the technology to get connected. It may require a phone call to walk another person through the steps.

“I was really happy to see people I hadn’t seen in a while. It’s kind of reassuring to see faces of a bunch of people who are doing OK.”

News of the positive tests initially circulated on social media platforms and among various parent groups.

Sultan: Terrified in your own home

When a woman heard banging at her door and windows in the middle of the night in University City, she didn't consider calling 911.

Merza built her home to easily accommodate frequent visits from her family and for her fiancé’s family, as much as for herself. “We are not a formal, sit-down-at-the-dining-room table kind of family,” she says.

Made in St. Louis: From salvage, Kirkwood woman creates unique pieces for the home

The recent increases come after virus spikes have been reported in several states, including Arizona, Florida and Texas.

At 17, Shri Anantha, has big plans to celebrate World Vitiligo Day Thursday as the founder of the Vitiligo Organization for Youth.

Kansas City is making masks mandatory inside businesses and other places that are open to the public amid a growing number of confirmed coronavirus cases.

Members of the choir at St. Peter's Episcopal Church in Ladue use Zoom to meet each week.