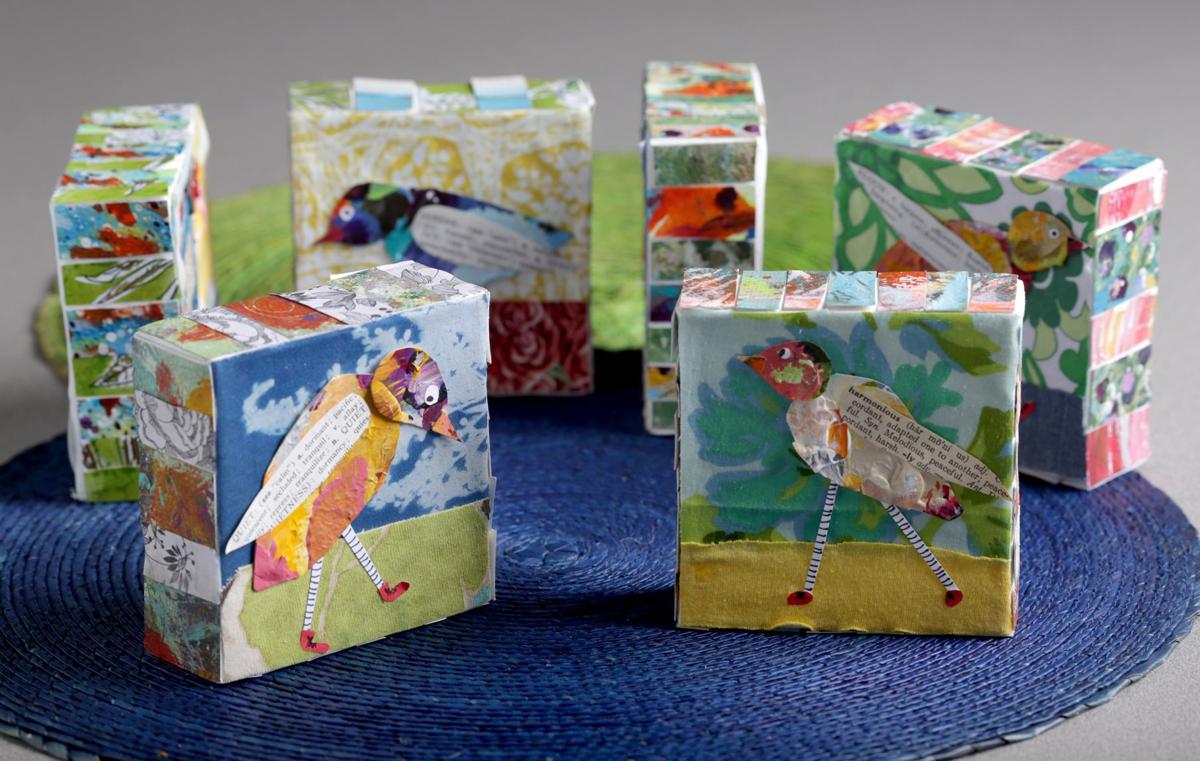 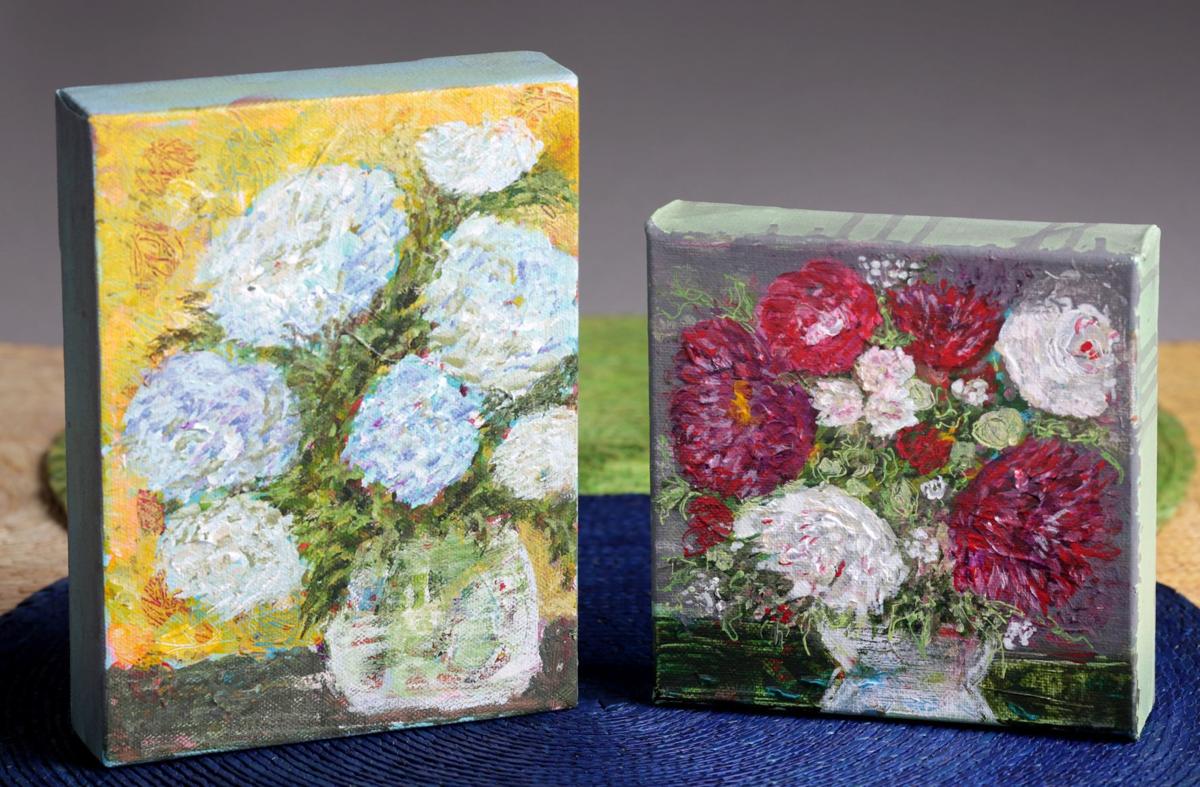 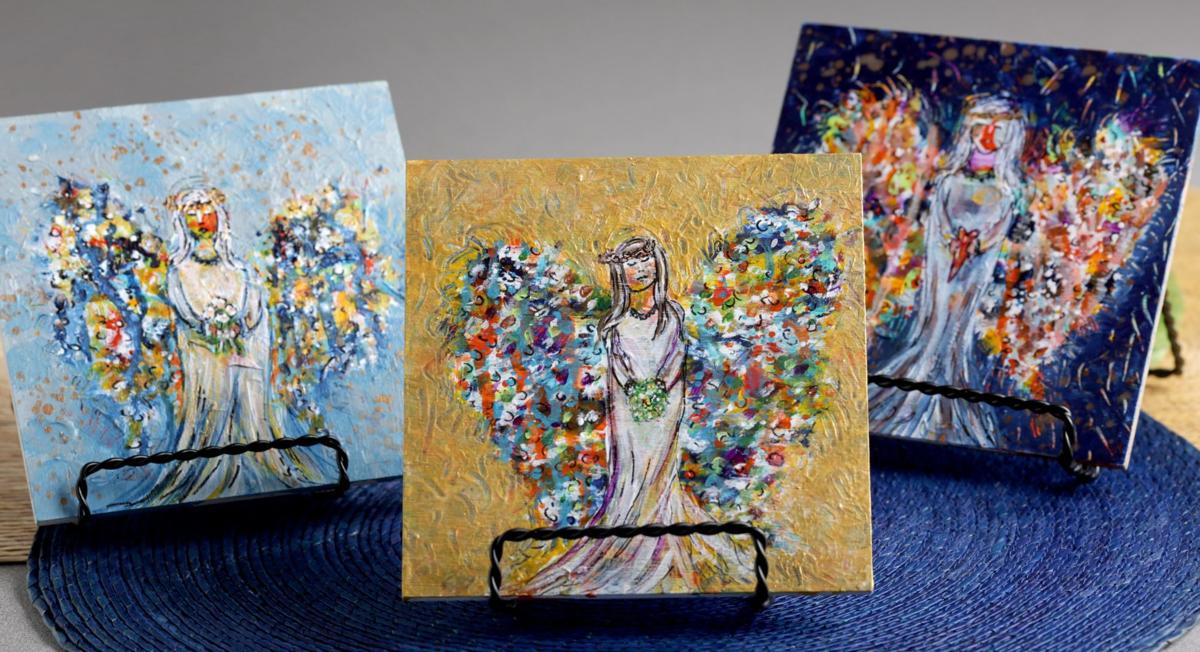 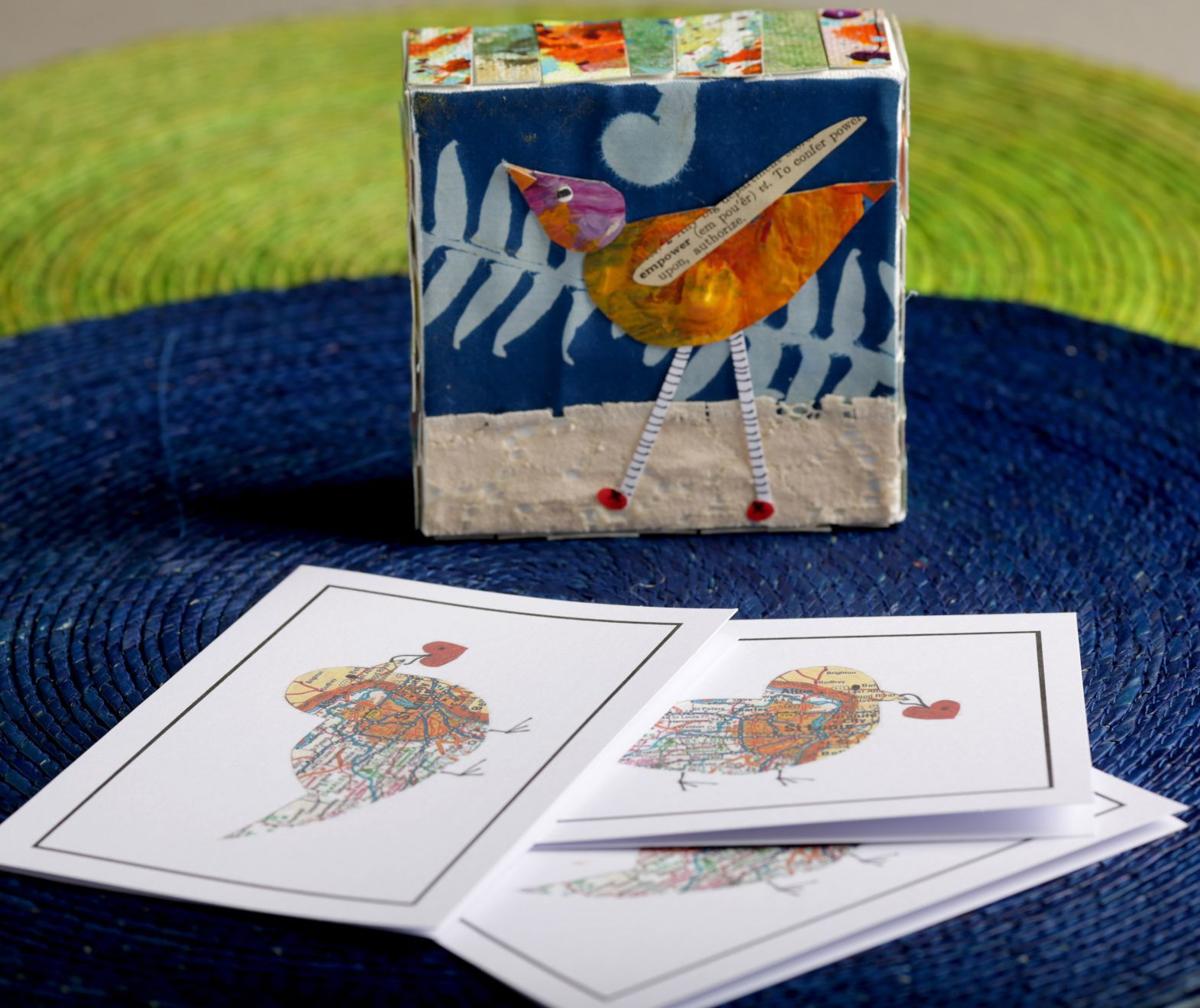 Carolyn Lewis’ plucky birds fly solo on her canvases, facing the world armored with the best intentions Lewis can muster. She cuts their bodies from her old layered paints, palettes long since dried.

She arrays them in snippets of favorite clothing, found objects and ephemera. She gives them strong wings of empowering words scissored from the dictionaries her Grandmother Sellers used in the Alabama classrooms of her youth. Each bird wears red shoes. “For those days when you need confidence,” Lewis says. She calls them her Flock of Empowerment.

Today, she shares them with the world in shops and on social media. “When you share your story, when your art connects to another person’s soul, that’s the power of art,” she says. “The three things you’ll see a lot in my artwork are birds, botanicals and angels,” she says.

A wing and a prayer • When Lewis started working as an artist full time in 2008, a series of life changes led the way. She had recently moved to St. Louis with her wife and shortly thereafter became pregnant with their daughter. When her grandparents, living in her home state of Alabama, needed help, Lewis returned to assist with downsizing and moving them from their home to an assisted-living center.

“We found stacks and stacks of outdated atlases my grandfather had kept. I took them back to St. Louis. I decided I would make something out of them.” Lewis holds degrees in art and in psychology. She worked as an art therapist with both children and adults in challenging situations. She used her skills to transform the atlases, a connection to a loved grandparent, into art.

“I cut out bird shapes from pages in the atlases of Alabama cities and made them into note cards I used to write to my family after our visit. I called them ‘Tweet Home Alabama.’ My relatives said ‘I want some of those cards’ and that’s how I started my business.”

A baby bird and taking care • Lewis’ business timing couldn’t have been better as 2008 continued to be a life-changing year. Her daughter, Charlie Bea, arrived 12 weeks early, weighing just 2 pounds. After 11 weeks in a neo-natal intensive care unit, Lewis and her wife brought their daughter home in the middle of a flu outbreak, Lewis transitioned from full-time work to full-time parenting. “I’ve managed to fit my art business around being a parent,” she says.

The world outside your door • Being a stay-at-home parent helped Lewis spread her wings, even as she became more closely to home. She grew her Tweet card business to multiple cities. She produced art full time, repurposing old materials into new artworks.

Three years later, Lewis and Gruver had a son, Grant Sellers. “I knew art was going to an integral part of my parenting. When we step outside, I say to my kids ‘Look at the detail of this leaf, or the colors in this flower.’

“I want them to see the unique beauty of ordinary things,” she says. Lewis paints plants and flowers and uses them to make sun prints in her personal work.

When Grant started first grade, Lewis resumed teaching, working with people through art. “You know, art is the first language for children who can’t verbalize their feelings. It’s useful for adults in difficult situations as well,” she says.

Angels among us • Lewis paints radiant angels with sheltering wings who have stories to tell of life, of people long gone, sometimes of regret. She paints her angels in September.

“September is because it’s an emotional month for me to walk through. My son Grant was born in September, a joyful day, but I’ve lost a lot of people in September. The way I take care of myself is by remembering the gifts they brought, the stories they told — and I make angels.”

She starts each piece with a written intention on a blank page. “I may start with a person’s name, or a poem, an idea,” she says. Next, she makes a ‘chaos’ layer, a paint-splattered under layer. Lewis then creates her images over that, allowing the chaos layer to appear when appropriate.

“My brother died of an overdose one September. When I went home for the funeral, we saw hummingbirds all around us, until he was buried. We didn’t see a single one afterward.

“In September, I look for hummingbirds. When I see one, it’s like a hug from my brother. I decided if I didn’t find one, I would create one, a red hummingbird, with an angel whose wings emerge from the chaos layer.

“I create every single day. It’s a full-time job for me. I teach classes. It’s just as important to me to share the power of art. That’s what I do.”

What she does • Lewis creates collages and paintings in a variety of styles and sizes. She makes handmade cards, gift bags and journals as well. She teaches art classes for adults, children and families that are project-focused with opportunities for individual expression in each artwork.

Where to buy • Espresso Yourself, Mac’s Local Buys at Bluewood Brewery and at the Audubon Center at Riverlands in West Alton; online at Facebook and Instagram

Sit down and listen: Artist's bench invites conversations about race

A colorful cabriole loveseat painstakingly created by artist Carolyn Lewis may be coming to a shop, a restaurant or a park near you. 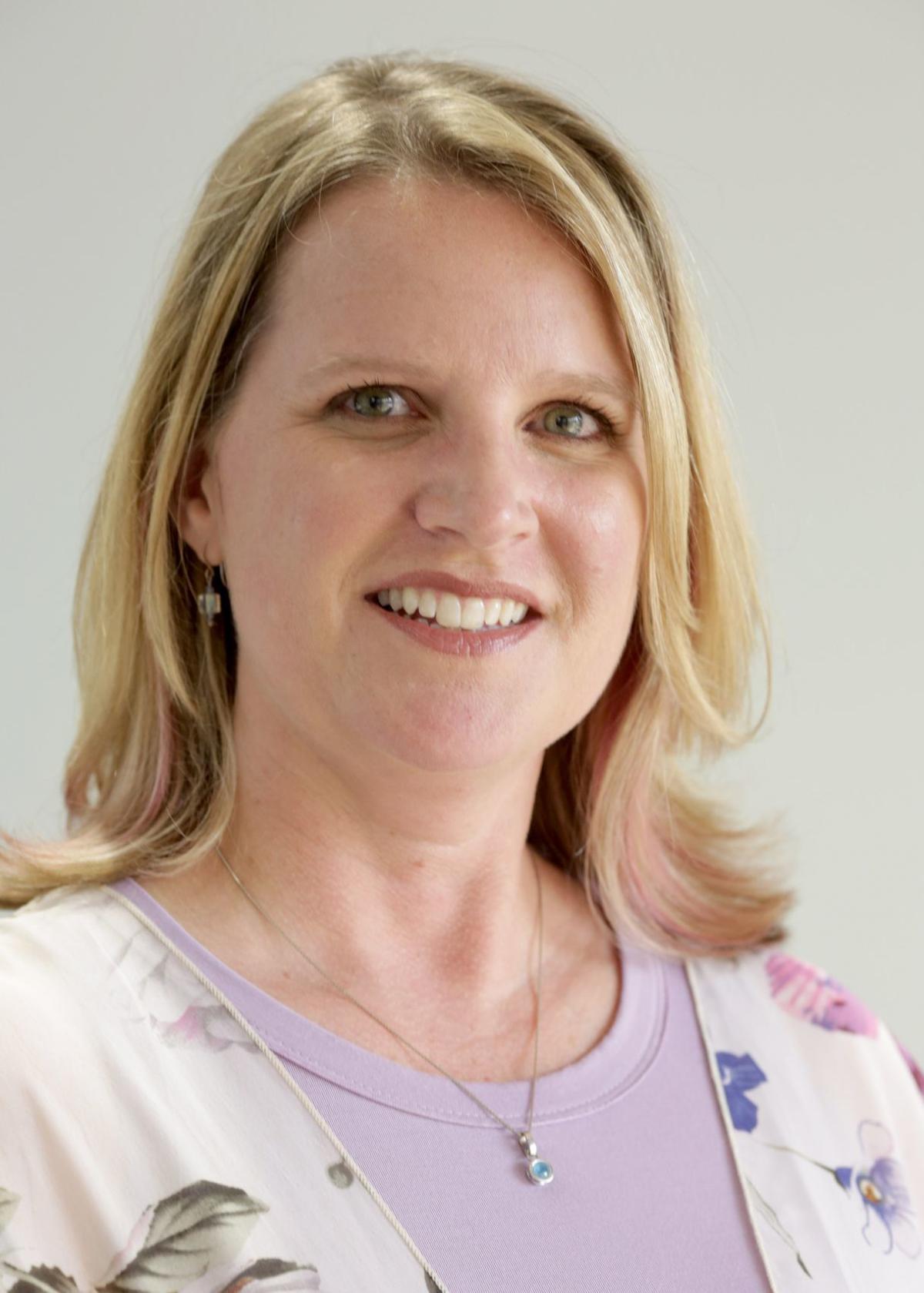