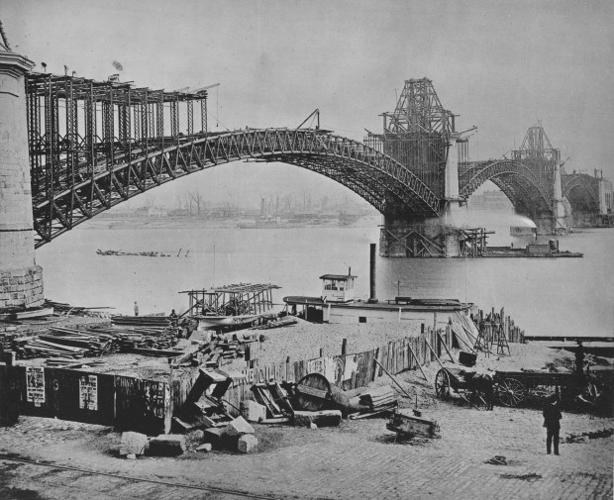 The Eads Bridge, the ribs completed and the roadways begun. Photograph shows view of the St. Louis Bridge under construction, spanning the Mississippi River. FROM THE LIBRARY OF CONGRESS

Eads Bridge. Shows finished bridge with statues which were not installed [ultimately placed on roof of Equitable Building]. Wood engraving by Will Conklin, 1874. Missouri Historical Society Photographs and Prints Collections. 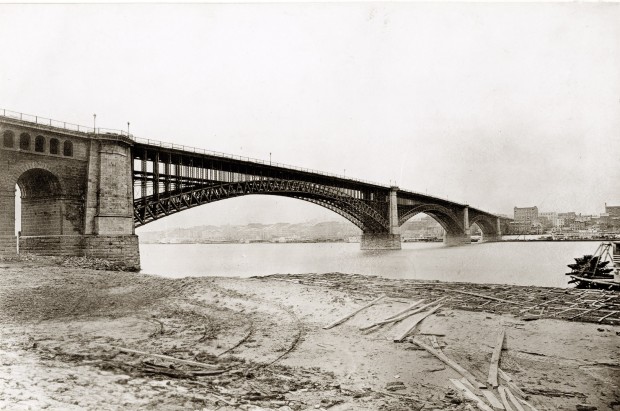 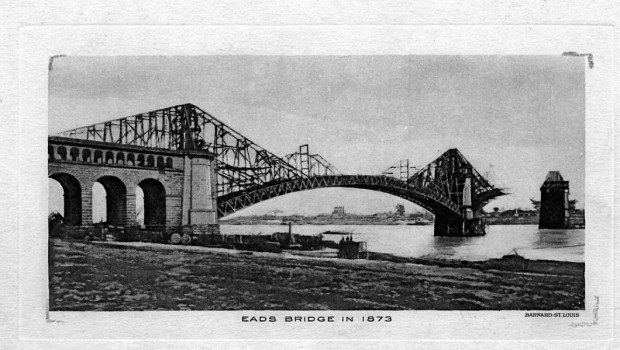 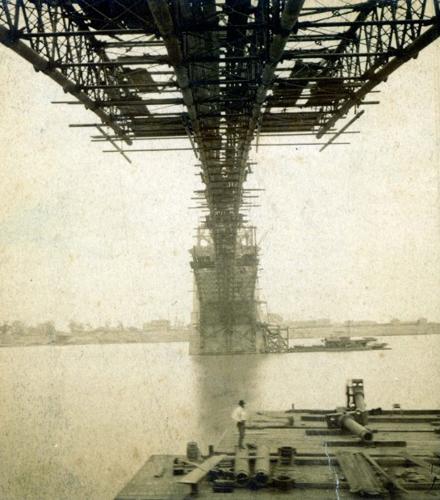 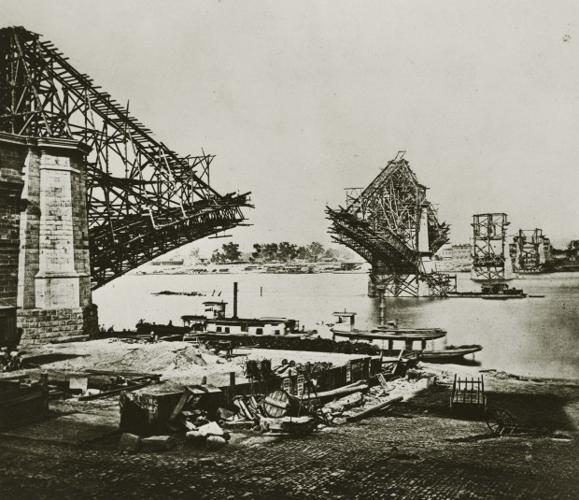 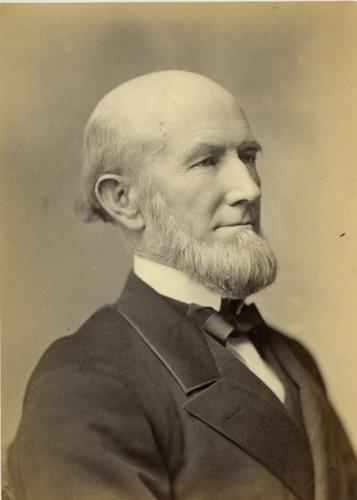 ST. LOUIS • The first teamster in line was Joseph Gartside, a coal hauler, who had decorated his four horses and wagon with flags and streamers. He paid the 50-cent toll and waited.

A stern-voiced keeper opened the gate at Third Street at 5:30 a.m. Gartside cracked his whip and, with words "more expressive than eloquent," lurched his wagon onto the new Illinois and St. Louis Bridge. The big gathering cheered as his team clopped its way to East St. Louis.

He led more than 700 wagons across the great bridge on June 4, 1874, commencing cross-river commerce on wheels. Bridge builders, led by James B. Eads, were counting on tolls from commercial traffic and trains. Overruns had pushed their bill to $6.5 million, and they needed income.

The first bridge over the Mississippi River at St. Louis was opened in a series of events leading to the July 4, 1874, dedication. Each step was less a matter of planning than availability. Pedestrians were allowed on for a nickel May 23, when workers vacated the street deck. (A newspaper declared it "as popular a trysting place as Lafayette Park.") Wagons couldn't cross until after June 2, when the roadway approach from Illinois was finished.

St. Louis leaders had talked about a bridge since the 1830s. The task grew in urgency after Chicago interests spanned the Mississippi at Rock Island, Ill., in 1856. Eads already was famous for salvaging river wrecks and building ironclad gunboats during the Civil War. He took risks and thought big.

His bold solution for getting across the Mississippi was an arch bridge of three spans made of stone, steel and iron, rather than a standard truss bridge requiring many more piers. His sand hogs, diggers working inside pressurized caissons to sink the piers to bedrock, went far deeper than anyone had before. They paid with 14 lives, victims of air-pressure "bends."

Two days before the dedication, Eads parked 14 locomotives on each span to silence the doubters. On July 4, an estimated 200,000 people jammed the riverfront for a 100-gun salute and lengthy speeches - a good turnout for a city of 330,000 people.

It stands today as the Eads Bridge, a great symbol of St. Louis.

Read more stories from the archives.

'The scientific feat of the country': The day the Eads Bridge opened

Frank Sinatra, Dean Martin and Sammy Davis Jr. performed a benefit concert at the Kiel Opera House for the Dismas House, a halfway home for convicts on June 20, 1965.

'You're not going to believe this:' A bizarre hijacking at Lambert 50 years ago

The rampage drew thousands to the park, many brandishing bats, clubs, sticks and knives. Groups of white youths marauded through the park, pummeling unsuspecting victims. It took more than 400 police and nearly 12 hours to restore order.

The mysterious case of the death of Eddie Gaedel

Nobody was ever charged after he was found bruised and beaten in Chicago on June 18, 1961.

Wet Willy's water slides: One of the wildest rides St. Louis ever saw

Wet Willy's opened on June 9, 1978. Riders had to hang on to their rubber mats for dear life as they caromed down concrete slides.

The Eads Bridge, the ribs completed and the roadways begun. Photograph shows view of the St. Louis Bridge under construction, spanning the Mississippi River. FROM THE LIBRARY OF CONGRESS

Eads Bridge. Shows finished bridge with statues which were not installed [ultimately placed on roof of Equitable Building]. Wood engraving by Will Conklin, 1874. Missouri Historical Society Photographs and Prints Collections.