Watch: Day 2 of the Trump impeachment trial in the Senate

1987: A supermarket holdup becomes the worst mass killing in the history of the St. Louis Police Department
0 comments
Share this
Support local journalism for 99¢
1 of 3 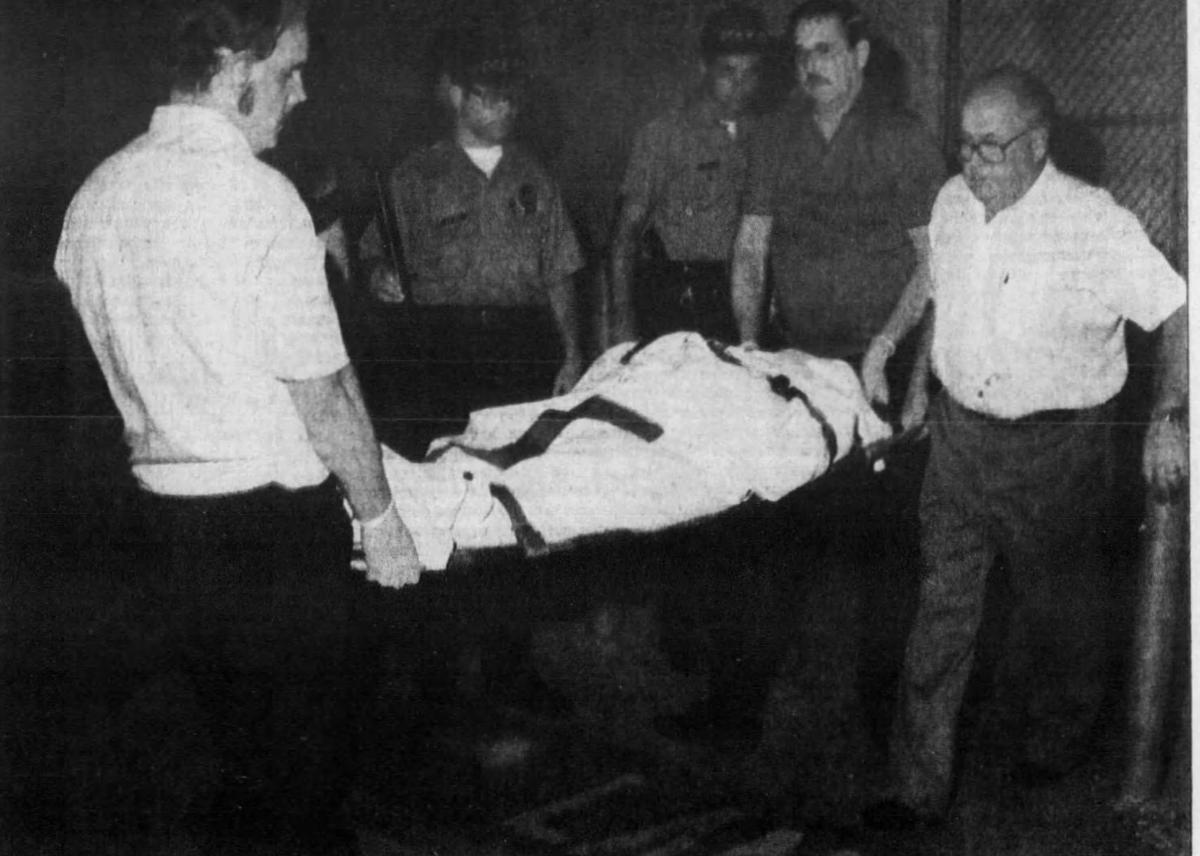 Police remove the body of one of the five people killed in the National Supermarket on Sept. 4, 1987. The victims were told to lie down, and each was shot in the head. St. Louis Post-Dispatch file photo, Wayne Croslin 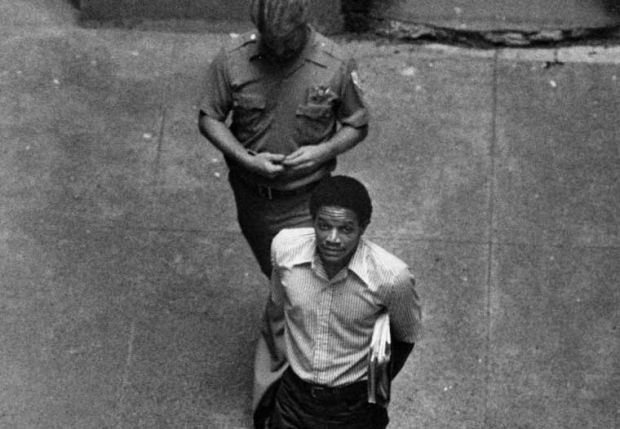 Marvin Jennings is led back to the city jail in St. Louis In September 1988 after testimony during his trial for killing five National supermarket employees on Sept. 4, 1987. Jennings was convicted. 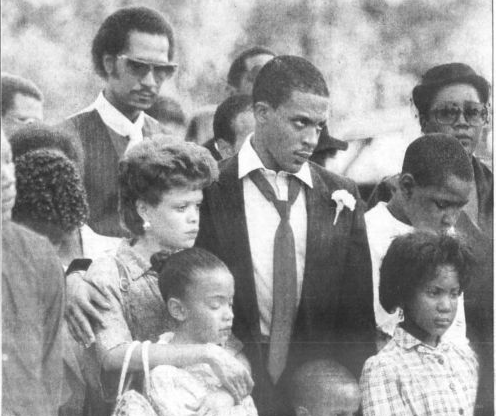 Editor's note: On the night of Sept. 4, 1987, two gunmen entered the National Supermarket store on Natural Bridge in north St. Louis. What followed would be the worst mass killing in the history of the St. Louis Police Department. This is the original report published in the Post-Dispatch.

Five people were fatally shot and two were seriously wounded during a holdup late Friday night at the National supermarket at 4331 Natural Bridge Avenue in north St. Louis.

Police were searching for two men in the shootings, which authorities say occurred sometime after the store closed at 10 p.m. The Police Department received its first call about 11:30 p.m., a spokesman said.

On Saturday, National Super Markets announced a $25,000 reward for information leading to the arrest and conviction of the killers.

''We are very much concerned about our employees and want to get this resolved as quickly as possible, '' said Kenneth Crecelius, assistant division manager of the chain.

Those shot were store employees, including one security guard, said Capt. Charles McCrary, commander of the homicide division. The assailants entered the store about 10:30 p.m., after it had closed. The gunmen may have posed as floor cleaners, said a store employee, Mike Monica, 28, who arrived at the store about 12:30 a.m. Saturday.

The victims were herded into a corner on the west side of the store, ordered to lie down in a row and were shot execution-style in the head, police said. The store aisles near the office contained pools of blood.

Capt. Jack Titone said, ''It's the most brutal thing I've ever seen.''

Police said the assailants were believed to have escaped with an undetermined amount of money. . Most of the store's cash is in a drop safe underneath the floor that is inaccessible to employees, store officials said.

Dead are four men and one woman; two other men were wounded, Young said.

Monica said he had been told by police that the assailants had run out of bullets during the shooting. They found the security guard's bullet pouch, reloaded and continued shooting, he said.

Police and store officials said two employees had been in the back of the store when the shooting erupted. The two men ran into a storeroom and up to the roof without seeing the killers, McCrary said.They  began calling for help, alerting a passer-by who called police, authorities said.

Police suspect that the assailants were familiar with the operations of the store. Often in ''inside jobs, '' victims are killed to prevent identification of the criminals, whom they may recognize, police said.

Seventeen police officers have been assigned to the case, under the direction of McCrary..

Police are seeking two men who are both described as being black, 30-35 years old and 5'8'' to 5'9'' tall. They are armed with at least one .38-caliber pistol and a pistol presumed to have been taken from the security guard.

One of the men is described as having a dark complexion with a scar 1-1 1/2 inches long on his right cheek and a short Afro hair style.

The second man is described as having a lighter complexion with acne scars and a thin build.

The men may have fled in a brown or gold 1977-79 Chevrolet Malibu or a light-colored compact. The car is described as being a four-door with white-wall tires and small hub caps. The body of the car is in good shape, police said.

Police said that area of Natural Bridge was usually busy on a Friday night and that some witnesses on the streets near the store might not have come forward. They asked that anyone who may have seen something call the homicide bureau at 444-5371.

The store is in a high crime area, police said.Authorities cordoned off the store, the adjacent sidewalk and two neighboring parking lots.

Across the street on Natural Bridge, hundreds of people lined the street to watch the investigation in the brightly lit store. The aisles, food stands and checkout lanes were neat and uncluttered, giving no hint that people had just been killed. 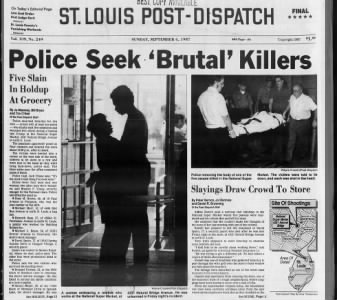 Police identified the dead as:

Rose M. Brown, 49, of 19 Paul Avenue in Ferguson, who was the lead cashier on the shift.

Kenneth Bass, 27, of 4568a St. Ferdinand Avenue in north St. Louis, a janitor who worked for Building Butlers Inc.

Spahn was rushed to Barnes Hospital, where he died, police said. The other four were pronounced dead at the scene.

Police said the two victims who survived the shooting were:

Richard Fortson, 32, of 8514 Dianthus Lane in Jennings, the store's service manager. He was listed in serious but stable condition at a hospital.

Harold Meyer, 30, of 11644 Mimeaux Drive in Spanish Lake, the store's manager. He was listed in critical but stable condition at a hospital.

At the police station downtown, Rose Brown's husband, William Brown, and five other relatives waited several hours before being told early Saturday that she was among the victims. William Brown said his wife had worked as a checkout clerk and office worker at the Natural Bridge store for about six years; she had been employed by National for more than 20 years, he said.

William Brown said that his wife had worked Friday from 3 p.m. to 11 p.m. He said he learned of the shootings when he tried to call the store at 12:30 a.m. because his wife had not come home.

''I'd call and get a busy signal or no answer, so finally I called the operator and she put me through to 911, '' Brown said. ''They told me to come down here. This is where I've been since.''

As he waited for word about his wife, Brown said, ''If she's alive, she's never going back there.''

Police remove the body of one of the five people killed in the National Supermarket on Sept. 4, 1987. The victims were told to lie down, and each was shot in the head. St. Louis Post-Dispatch file photo, Wayne Croslin

Marvin Jennings is led back to the city jail in St. Louis In September 1988 after testimony during his trial for killing five National supermarket employees on Sept. 4, 1987. Jennings was convicted.