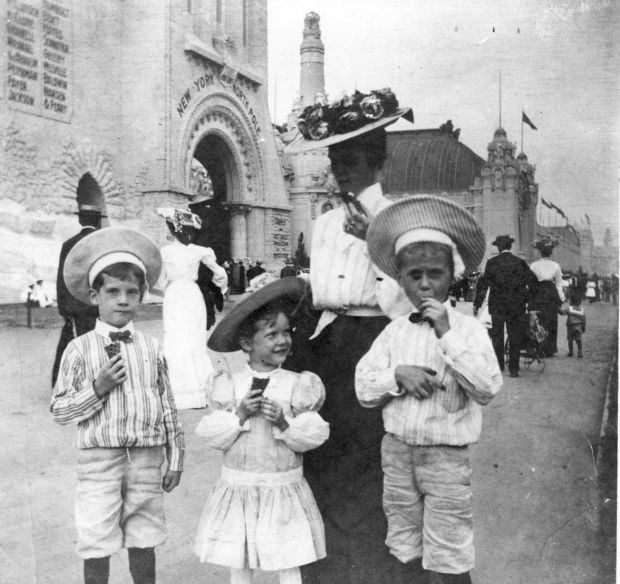 Children and their mother enjoy ice cream cones at the St. Louis World's Fair. The fair certainly helped make ice cream cones popular, but they probably were invented by a New Yorker who obtained a patent in 1903. Image courtesy Missouri History Museum 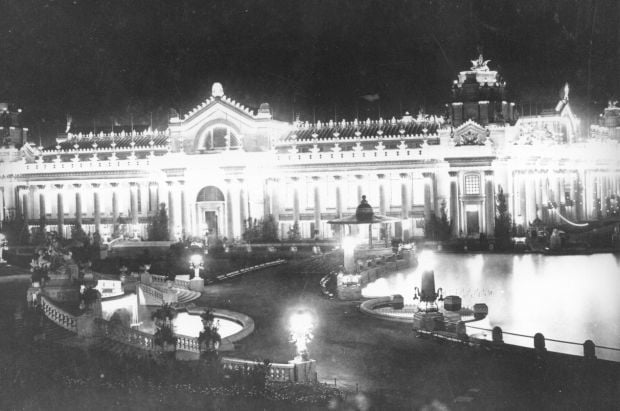 A night view of the Palace of Electricity at the Louisiana Purchase Exposition, or St. Louis World's Fair, in 1904. Many of the buildings were brightly lit. Image courtesy of Missouri History Museum.

The crowds had been filing through the ticket lanes since 8 a.m. Five hours later, an ensemble led by bandleader John Philip Sousa burst with patriotic fanfare.

Far away in the White House, President Theodore Roosevelt threw an electric switch. In Forest Park, water rushed from the cascades and fountains. Nearly 200,000 people were there to cheer. 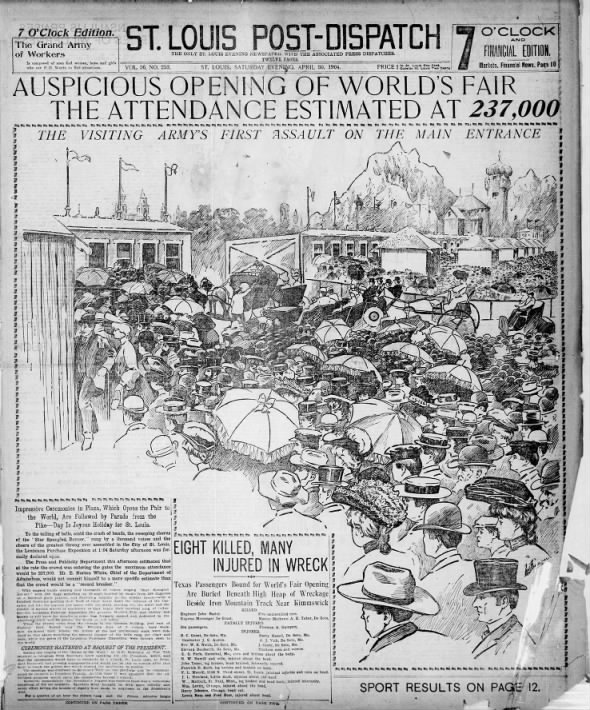 It was a dramatic opening for the Louisiana Purchase Exposition on April 30, 1904, easily the most anticipated day ever in St. Louis. The seven-month run was a smashing success. At least 12 million visitors paid to get in, and 20 million is the often-cited total attendance.

It even made money.

The fairground was spread across 1,272 acres, or nearly two square miles. It covered the western part of Forest Park and extended west into the new campus of Washington University and the future site of Concordia Seminary.

Its center was the sweeping, fan-shaped vista now known as Art Hill. Cascades splashed down the hill into the Grand Basin.

Forty-one states and territories had buildings on the grounds, with Missouri's on top of today's Government Hill. Pennsylvania brought the Liberty Bell.

Aug. 11, 1904: 'Anthropological athletic meet' exposes the abhorrent side of the World's Fair

Some of the popular exhibits speak to racial mores of the times. Today the exhibits would be viewed as insensitive or even abhorrent.

The biggest spread, west of today’s Skinker Boulevard, was that of the Philippines, America’s new colony. Some of the popular exhibits speak to racial mores of the times — fairgoers were fascinated by the huts and habits of the “primitive” Igorrote tribe of the Philippines, the dancing Batwa Pygmies of Africa and living portrayals of “model schools” for Native Americans. Geronimo, the great Apache warrior and captive of the American government, charged a dime for his autograph.

Washington University hosted the 1904 Olympics in July and August. It was the third such competition in modern times and the last in which athletes didn’t officially represent countries.

At night, the fair was ablaze in lights. The midway running along Lindell Boulevard, known as the Ten Million Dollar Pike, was packed with games, rides, concessions and shows of military might. The 264-foot-high Ferris wheel, brought down from Chicago, stood near today’s Skinker and Forsyth boulevards. Each of its 36 cars could hold 60 people.

The fair attracted millions of visitors from around the world. It was a favorite diversion for delegates to the 1904 Democratic National Convention, held July 6-9 in the Exposition and Music Hall downtown (now site of the Central Library). The Tammany men from New York said the midway compared well to Coney Island.

On Nov. 19, a fire gutted the Missouri pavilion. As flames spread, a detachment of Marines dashed into the building and rescued a bell destined for the Navy’s battleship Missouri.

Six days later, President Roosevelt visited with his wife, Edith, and their daughter, Alice. Their carriage was mobbed by well-wishers. “Fine, fine,” Teddy said of the fair.

On closing night Dec. 1, about 100,000 people witnessed a dramatic dousing of all the lights. Vendors had run out of beer an hour before.

The fair's legacy in stone, metal and winter sport

For all the massive buildup for the World's Fair, not much is left but photographs and mementos.

Almost all of the buildings, made of wood and plaster, were demolished as intended. The Palace of Fine Arts, designed to be permanent, became the Art Museum. The zoo bird cage was preserved from the fair.

The open-air World's Fair Pavilion atop Government Hill, often confused as a structure from the fair, wasn't built for another five years. It stands upon the site of the Missouri state pavilion, which burned shortly before the fair ended.

The Jefferson Memorial, now part of the Missouri History Museum, was finished in 1913 on the site of the fair's main entrance at Lindell Boulevard and DeBaliviere Avenue.

The most enduring symbol is the bronze statue of King Louis IX on Art Hill. It was inspired by a popular plaster statue of the same design that stood at the main entrance. It was dedicated with a parade on Oct. 6, 1906.

One other thing remains. To make way for the fair, workers cleared a long slope of trees. Sledders began using the hill on the first snow after the fair. They still do, on what we now call Art Hill.

The ice cream cone and other beloved myths

The ice cream cone was invented at the St. Louis World's Fair, right?

Nope. It is a warmly held local legend, but a New Yorker had taken a patent on the confection in 1903. Many vendors at the fair offered versions of the ice cream cone, and their popularity helped make it famous. Perhaps that's legend enough.

Other myths have it that the fair introduced the hot dog and iced tea. They, too, were popular treats. Just not original ones.

Opening of the World's Fair

Palace of Electricity at World's Fair

Camels at the World's Fair

Re-enacting battles at the World's Fair

The pike at the World's Fair

Ice cream at the World's Fair

20 years ago: Ricky Proehl's catch vaulted the Rams to the Super Bowl 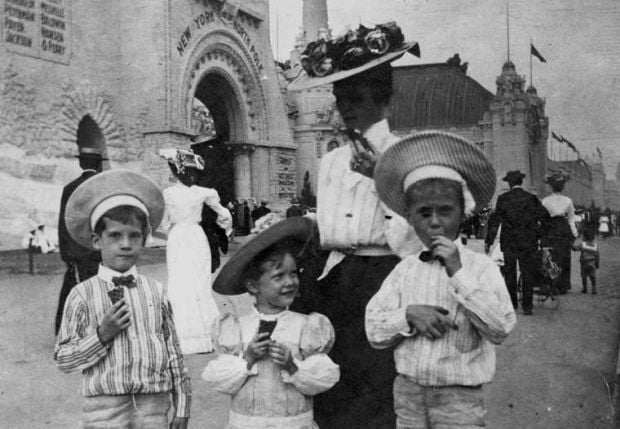 A woman and her children enjoy ice cream cones at the 1904 World's Fair. Photo by Missouri Historical Society.

Children and their mother enjoy ice cream cones at the St. Louis World's Fair. The fair certainly helped make ice cream cones popular, but they probably were invented by a New Yorker who obtained a patent in 1903. Image courtesy Missouri History Museum

A night view of the Palace of Electricity at the Louisiana Purchase Exposition, or St. Louis World's Fair, in 1904. Many of the buildings were brightly lit. Image courtesy of Missouri History Museum.