Subscribe
Read Today's E-Edition
Share This
Best of McClellan: The Important People and the day the presidential debate rolled into town
0 Comments
Share this
Bill McClellan

Bill McClellan was on the scene, and here was his report.

ABOUT AN hour and a half before the presidential debate, August Busch III walked into the Anheuser-Busch hospitality tent next to the Washington University Field House.

A murmur passed through the crowd. ''Who's that?'' asked a Secret Service agent with an audio cord sticking out of his ear.

''That's the important Mr. Busch,'' said a local cop, differentiating the brewery head from the president of the United States.

Maybe the cop was overstating things, but if so, only by a touch. Not only had the important Mr. Busch agreed to underwrite the cost of the debate, but he was also the man with the tickets.

So does Vladimir Noskov, the gonzo journalist from radio station KSD. He is particularly adept at asking outrageous questions. When Marilyn Quayle was in town about a week ago, Noskov confronted her.

''Considering that your husband is Dan Quayle, don't you think there's something to be said for women who opt to be single parents?'' he asked her.

And Sunday evening, there he was at the press tent, desperately trying to get credentials.

''Your name is not on the list,'' the credentials man said.

About that time, St. Louis Police Chief Clarence Harmon walked into the tent.

''The chief will vouch for me,'' said Noskov.

''His name isn't on the list, but if you'll personally vouch for him, it's OK with me,'' said the credentials man.

''Sure,'' said the chief, and Noskov scampered into the field house.

Inside the field house, a fine buffet had been set up for the hundreds of reporters who had been herded into their own room where they could watch the debate on dozens of televisions. Political dignitaries wandered around, offering pre-debate opinions.

''What's the difference between Democrats and Republicans?'' Noskov asked. ''I haven't noticed a difference.''

Cuomo launched into a speech.

Willie Obermoeller, a local electrician of my acquaintance, came in to get some food. He's living proof that these big events really do inject money into the local economy. He's been working on the audio preparations all week.

I must have looked puzzled, because he hiked up his trousers a bit to show me his long underwear.

''I'm working in the debate room,'' he said. ''We've kept it at 55 degrees since Thursday. I guess the candidates want to be sure not to sweat.''

Unlike the reporters, Obermoeller had actually seen the candidates. They'd been out on the podium earlier to check things out. I asked him for his impressions.

He said that Bush and Clinton both seemed relaxed. Clinton had spent the most time primping, checking out different jackets and ties, trying to get just the right look.

''He didn't even bother to check things out,'' said Obermoeller. ''I guess he'll just wing it.''

While I pondered what this meant, I went upstairs to watch the Important People walk past, the ones who had real tickets, who would forever be able to say that they had seen this spectacle live.

Most of the people looked properly Important. I saw Busch and Charles Knight. Congressman Richard Gephardt walked past.

''Neither has more power,'' said Gephardt.

Dan Dierdorf walked past. His presence seemed appropriate. When I had arrived on the campus, I had been reminded of college football. The chill in the air, the sense of an imminent contest, the sound of organized cheering.

Actually, it hadn't been cheering. Libertarians were chanting in protest.

And now the game was about to begin. As I stood in the hallway, barred from the actual debate because of my low-level yellow pass, the organizers suddenly realized they had space left.

''Hey, reporter! You want a blue pass?'' asked some official-looking guy. ''You want to get into the debate?''

I declined, because I had decided to watch from the hospitality tent where television had been set up.

''I'll take it!'' shouted Noskov, and I watched him duck into the hall.

Whether he got to confront any of the candidates, I don't know.

Incidentally, the consensus in the hospitality tent was that Perot won.

Unless you count the important Mr. Busch. This was a good show he brought us.

1900: A great fire wipes out a hive of industry in the St. Louis business district

If a cyclone had dropped from the clouds and scooped up a section visited by the fire on Feb. 4, 1900, the destruction could not have been mor…

Our original take on 'Groundhog Day': Bill Murray as funny as he's ever been

30 years ago, we first spent a day with weatherman Phil Conners - and we did it over and over again.

A Look Back • Fire destroys Missouri Capitol, sparking effort to build new one in St. Louis

Lightning strikes the dome of the Missouri Capitol, igniting a fire whose glow can be seen for 60 miles. The destruction also sparks an ultima… 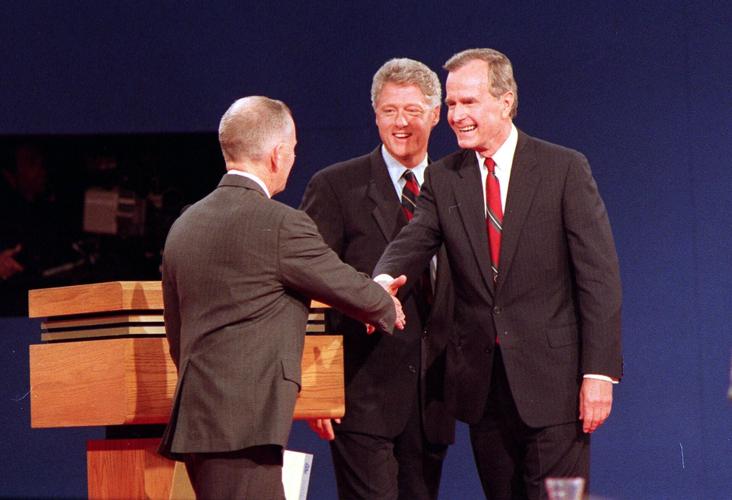 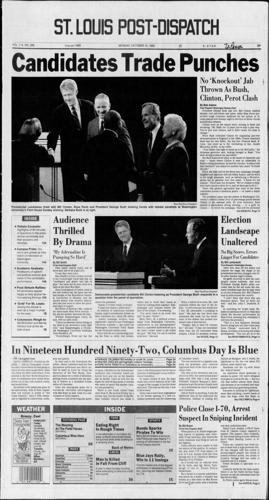 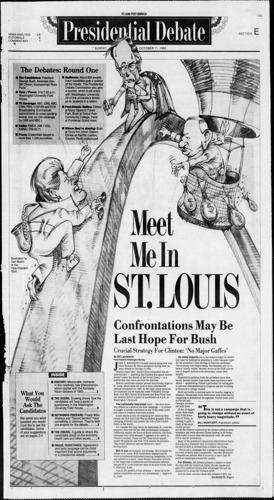