ST. LOUIS • A servant heard a muffled pop from her master's bedroom. She summoned his sons, who broke down the locked door and found William J. Lemp Sr. dead with a gunshot to his right temple.

The .38-caliber revolver was nearby. It was the first of four fatal gunshots in the sad tale of St. Louis' first beer dynasty. 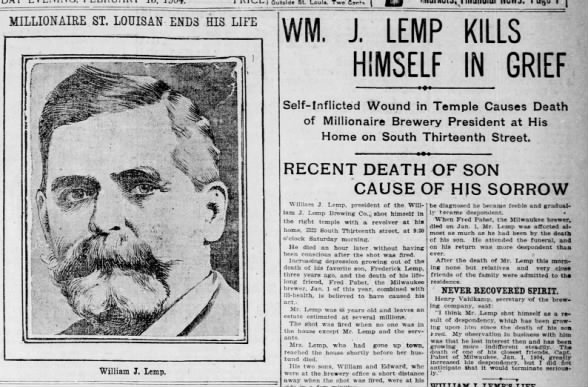 Lemp, 68, shot himself on the morning of Feb. 13, 1904, in his second-floor bedroom of the family mansion at 3322 South 13th Street (now DeMenil Place), next to his brewery covering 13 blocks. Lemp had never gotten over the sudden death in 1901 of his son, Frederick, brewery superintendent, from a heart ailment. His depression deepened. When he didn't emerge from the room that morning, no one took much notice.

His father, John Adam Lemp, introduced lager beer to St. Louis in 1838 with a brewery at 112 South Second Street. William Lemp moved the operation in 1864 to Carondelet (Broadway) and Cherokee streets, a favorite area for brewers because they could store beer in cool limestone caverns.

Among neighboring competitors was Anheuser-Busch Co., which introduced Budweiser in 1876. A-B overtook Lemp in total sales sometime during the 1880s, but Lemp's Falstaff brand outsold Budweiser in St. Louis.

The Lemps were local royalty. In 1897, Lemp Sr.'s daughter, Hilda, married Gustav Pabst of Milwaukee. Two years later, William Lemp Jr. married Lillian Handlan, a railroad-supply heiress known as the "Lavender Lady" because she favored that color for everything, even the harnesses on her horses. Their divorce in 1909 was a local sensation.

William Jr. turned the mansion into company headquarters when he took over. On March 20, 1920, another daughter of Lemp Sr., Elsa Lemp Wright, fatally shot herself in her home at 13 Hortense Place. At the scene, William Jr. said, "This is the Lemp family for you."

The Lemp brewery closed in 1920 with enforcement of Prohibition. In June 1922, William Jr. announced he would sell the property. "I am tired of seeing all the weeds in the courtyards," he said.

With the business gone, the family restored the mansion as a residence. On May 10, 1949, in a room adjoining the one in which William Jr. committed suicide, his brother, Charles A. Lemp, 77, shot himself. He was the only one to leave a note: "In case I am found dead, blame it on no one but me." 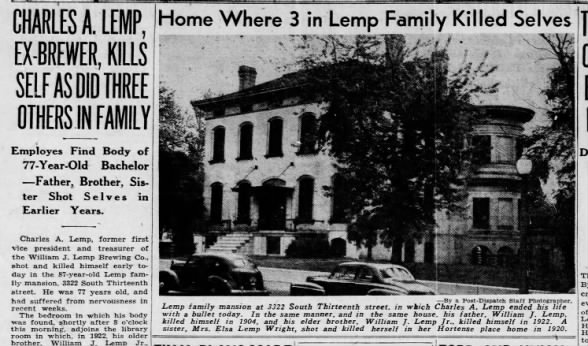 The mansion became a rooming house. Restored as the Lemp Mansion Restaurant & Inn, it is a favorite haunt of ghost enthusiasts.

Editor's note: If you or someone you know exhibits warning signs of suicide, call the U.S. National Suicide Prevention Lifeline at 1-800-273-TALK or visit suicidepreventionlifeline.org.

A look back at the Lemp family

30 years apart to the day: The suicides of two St. Louis beer barons

Touching down at 6:55 p.m., the twister followed a 21-mile path that started near Chesterfield and took a northeast direction through North County

20 years ago: So long to a president who 'embarrassed himself, his family and his country'

In January of 2001, on his final day in office, President Bill Clinton admitted that he gave false testimony in the Paula Jones case. This is the Post-Dispatch editorial at the conclusion of his presidency.

Memories of Mississippi Nights: 14 years ago it turned out the lights for good

21 years ago: Ricky Proehl's catch vaulted the Rams to the Super Bowl

It was a mere 16 years ago that the Post-Dispatch wrote about a new craze at Mizzou, Washington University and St. Louis University.

One search, two boys found: The Missouri Miracle 14 years ago

40 years ago: Mom is out gambling as 11 children die in house fire

11 of Virginia Williams' children died in a house fire in East St. Louis. The children had been left home alone and ranged in age from 10 months to 11 years.

It was a mere 16 years ago that the Post-Dispatch wrote about a new craze at Mizzou, Washington University and St. Louis University.