Keep reading for FREE!
Enjoy more articles by signing up or logging in. No credit card required.
Log in Sign up Subscribe for $3 for 3 months
Please subscribe to keep reading. You can cancel at any time.

July 12, 1966: The Rolling Stones play their first St. Louis show to a half-empty Kiel
0 comments
Share this
Subscribe for $3 for 3 months

July 12, 1966, was a sweltering day in St. Louis that featured not only the Major League All-Star Game, but the first visit of the Rolling Stones to St. Louis. Here is how we reviewed that concert.

When the sun sets on the British Empire, one gathered from the advance publicity, the figures left on the dark, gloomy landscape would be the Rolling Stones.

"Elegantly sinister," reported a columnist for the New York Post. "They sit before you at a press conference like five unfolding switchblades ..."

"Leering," said Newsweek. Vogue took a longer view that was bleakest of all: "The effect is sex that isn't sex. Which is the end of the road."

Perhaps as it affected almost everything else in St. Louis yesterday, the heat may have enervated the impact of the Stones, who sang last night at Kiel Convention Hall. They were neither elegant nor sinister.

If they leered, it was lost in the flashes of the tiny cameras that little girls thrust hopefully over the heads of the persons standing before them; if they suggested sex well, in the peculiar adolescent atmosphere of noise, jostle and a few isolated cases of studied cool, who could have taken it seriously.

Four of the five Stones neither folded nor unfolded like switchblades or anything else. Having assumed a position on stage, they rarely left it except for a few desultory, exploratory steps.

As a name, Rolling Stones seemed an extravagance.

The exception was the leader, Mick Jagger, who was all over the stage, dancing, strutting, jumping, mincing, pounding a tambourine and tossing a bump now and then for good measure.

The Stones, who got together originally in a suburb of London, have been making records for about three years. At least seven of their records have sold more than 1,000,000 copies.

Their appeal has lain largely in that they represent the quintessence of the anti-establishment aspect of pop music what Tom Wolfe describes as "raw, proletarian vigor."

The Beatles, who as Members of the British Empire are now part of the pop establishment, sing "I Wanna Hold Your Hand." The Stones, who speak for the Outs, sing, "Get Off My Cloud" and "I Can't Get No Satisfaction."

The Beatles are safe and cuddly; the Stones are angular, brooding and, as the man from the New York Post noted, somewhat threatening.

The Convention Hall, which seats 10,500 persons, was about half filled last night. The audience was very young: girls in ribbed poor boy sweaters, boys in Madras sports jackets, both sexes in tight pants and boots.

Many waited outside in the 100-degree heat in hope of seeing the Stones arrive. Bedraggled-

looking vendors, who earlier in the day had sold souvenirs at the All-Star baseball game, were now peddling plastic opera glasses and pennants that read "Love the Rolling Stones.

At show time, however, the Stones were nowhere near Kiel. They were resting in their air-conditioned rooms at the Chase-Park Plaza Hotel. Limousines would speed them to the auditorium in time for their act, which took up the second half of the program.

"They usually just drive in, run down to the dressing room, drink a few Cokes, tune up and do the show," Mike Conwell, road trip manager for the program, said. "Then they run out, which is good because it eases congestion.

"We got in from Houston about 4 this morning and the Stones spent the day in their rooms. Also they did some swimming. They play a lot of Monopoly, too. It's very big now the Beatles play Monopoly."

The three groups that preceded the Stones were the Trade Winds, the Standelles and the McCoys, all of whom come from the United States and look and sound more or less alike: Beatle-mopped, a bit round shouldered and loud to a point of incoherency.

The Stones arrived with a police escort just before intermission. Jagger, who was dressed in a white blazer with brown stripes, a blue button-down shirt, white pants, white socks and white loafers, chatted with reporters before the group went on stage.

"St. Louis is a funny town for record sales and promotions," he said. "The ratio of singles to albums they sell a lot more singles here."

When the Stones started to play, the audience surged forward, up to the orchestra pit where the Kiel Auditorium guards linked arms and held the youths back. On stage, Jagger was going through a series of fantastic gyrations. A few persons threw coins.

A young man from the Gateway Theater was standing in the wings. "Marvelous," he said. "Absolutely uninhibited."

Mike Gruber, a member of the Stones' retinue, was backstage, a khaki bush coat thrown cape-style over his shoulders. He held a cigarette by the filter between his teeth. The size of the audience disappointed him.

"The trouble," he was saying, "is the audience. Listen to them."

The Stones sang for 30 minutes, closed with "I Can't Get No Satisfaction" and hurried off stage without an encore. They went immediately to their black limousines, which were parked in the Kiel garage, and, with police cars in front and in back of them, set off again for the Chase.

In the driveway, a group of teen-agers had gathered hurriedly to see them leave.

1981: The Rolling Stones rock the Checkerdome

"He (Jagger) was up and down, kicking and leaping, and on one occasion dashed into the crowd to sing and get close to the fans."

Piranhas in the suburbs! The day Glen Carbon neighborhood had a real fish problem on its hands 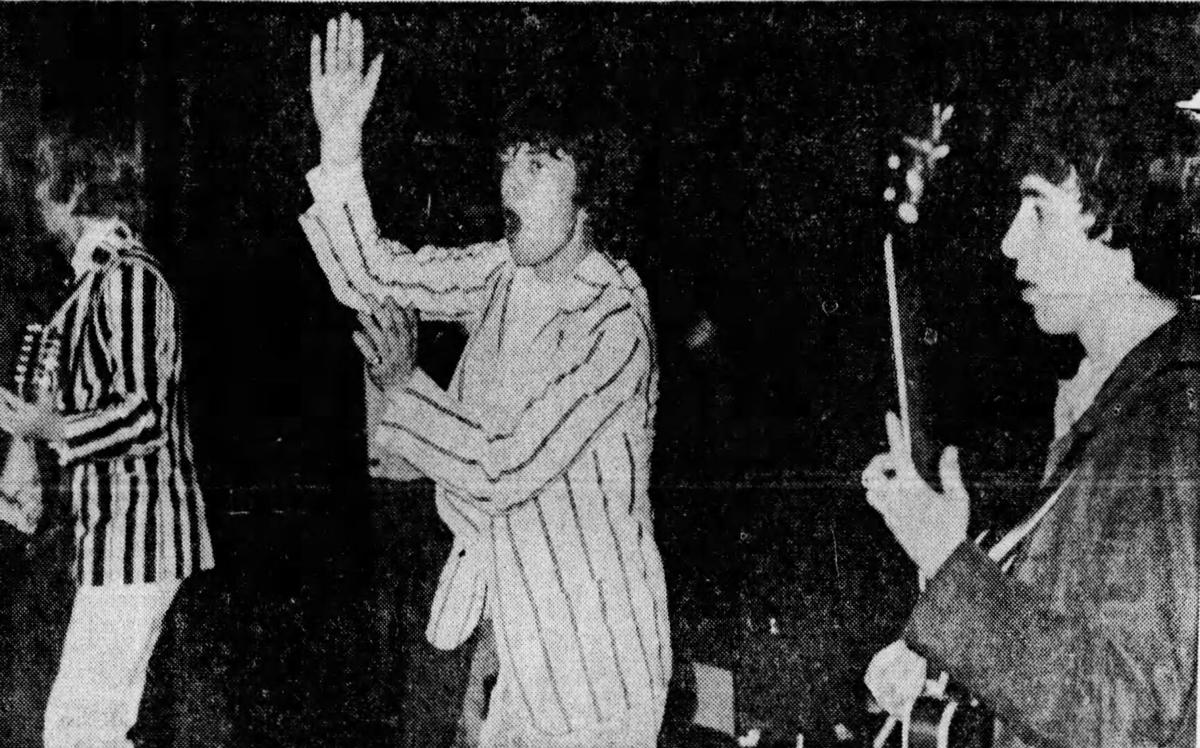 Brian Jones, Mick Jagger and Keith Richards are shown in a more subdued moment from their first concert in St. Louis on July 12, 1966. 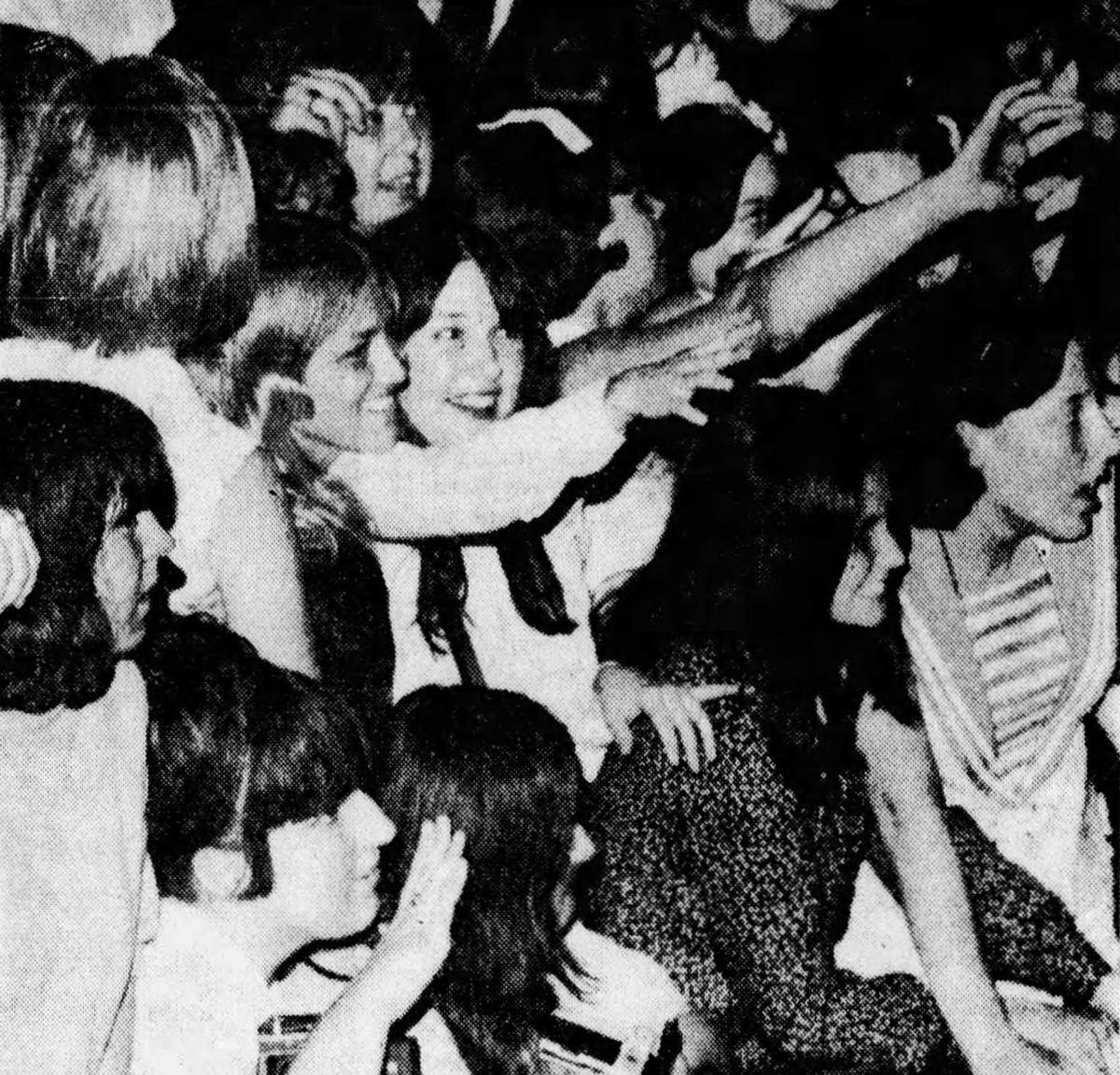 The crowd at the Kiel Convention Hall shrieks for joy at the Rolling Stones first visit to St. Louis on July 12, 1966. Post-Dispatch photo

When the Stones were on stage, boys and girls alike were shrieking. Post-Dispatch photo.

The Rolling Stones first show in St. Louis filled fewer than half the seats in the Kiel Convention Center. Post-Dispatch photo