It was June 21, 1949, a Tuesday, the first day blacks were allowed entry into St. Louis municipal swimming pools that were previously white-only. The decision to integrate the pools resulted in what was considered the most widespread outbreak of racial violence in the city's post-World War II history.

Here is our original coverage of the event.

An order restoring the former policy under which segregation of Negroes and whites was observed at municipal swimming pools was issued late yesterday by Mayor Joseph M. Darst after the first of a series of disturbances occurred at the Fairgrounds Park pool.

Only the day before, Mayor Darst's director of public welfare, John J. O'Toole, had issued a statement saying that Negroes would not be denied swimming - privileges in any of the city pools.

A Negro man and a white youth were stabbed and at least 10 other persons were injured in the series of disturbances that started shortly shortly after Fairgrounds pool opened at 2 o'clock yesterday afternoon.

At Marquette pool, Osage street and Minnesota avenue, which is the only other outdoor municipal pool, no disturbances were reported. reported. 400 Police Restore Order.

Approximately 400 policemen and detectives were called out to restore restore order early last night as crowds of white youths attacked Negroes in Fairgrounds Park and in streets near the park.

As word of the disturbance spread, several thousand persons began to mill through the park area. The crowd was made up largely of curious onlookers, and included men and women with children in their arms.

See the Post-Dispatch front page from that day

The disturbances in large part were created by irresponsible teenagers, teenagers, with a few older persons participating.

The Mayor announced today that the Fairgrounds and Marquette Marquette pools and the indoor Mullanphy pool will be closed for the time being. The city's six other indoor pools Soulard, Cherokee and Sherman for whites and Tandy, Adams and Buder for Negroes Negroes were open as usual.

Mayor Darst said he will hold a conference in a few days with white and Negro civic leaders to discuss the general problem. He is now working on appointment of a new Race Relations Commission to replace the advisory group of 72 white and Negro members organized by his predecessor in office, he added.

He said funds for this are available available from the 1944 bond issue for postwar improvements, which earmarked earmarked $775,000 for swimming pools. He estimated that a pool could be built and equipped for about $200,000, and could be ready for use next summer.

Referring to the statement of policy in which his public welfare director last Monday had ordered discontinuance of segregation at the city pools. Mayor Darst asserted asserted he had not known about OToole's statement before it was made public.

Of the Fairgrounds Park disturbances disturbances the Mayor said: "Last night was a horrible experience and had a bad effect, I am sure, on race relations everywhere. It is regrettable."

"Notable progress has been made in race relations in St. Louis in recent years. It would be extremely extremely regrettable if any interpretation interpretation should be placed upon the recent statement of Director of  Public Welfare John J. O'Toole relative to municipal swimming pools which would have the effect of destroying the good relationship relationship existing among our citizens.

"Mr. O'Toole is on sound legal ground in stating that there is no authority in either state law or city ordinance which would deny any citizen the right to use publicly supported facilities.

"This practice has worked well. St. Louis has become noted for its spirit of fair play, its tolerance and its progress in the field of amicable race relations.

"The division of pool facilities seems fair six for white citizens and three for colored citizens. In the event it is shown, however, that pool facilities for; the colored are inadequate, it will be my purpose purpose to expand and improve them, either using 1944 park bond issue funds or calling for an additional bond issue for this purpose."

The Mayor said his order restoring restoring segregation at the swimming pools also applied to the 37 city playgrounds. In this connection he declared:

"In view of the fact that playgrounds playgrounds are established in certain communities to take care of children children in those neighborhoods, it seems the policy already has been set and they will continue to function for the benefit of neighborhoods neighborhoods in which they are located." located."

From 2009: Witnesses recall that day at the pool

O'Toole's order had called for admission of Negro children to all the playgrounds. The trouble started shortly after the Fairgrounds Park swimming swimming pool opened at 2 p.m.

The pool operates on six one-hour one-hour one-hour shifts, being cleared every hour for a new group or swimmers. Juveniles use the pool from 2 to 5 p.m., and adults are admitted between 7 and 10 p.m.

During the first shift, approximately 35 Negro boys lined up at the entrance and were admitted to the pool with white youths. There were no disturbances in the pool, but groups of white youths, gathering outside the wire fence surrounding the pool, booed the Negro swimmers.

They were shoved around by white youths and their bicycles were smashed before police rescued the two and escorted them out of the park.

In an effort to avoid further trouble, the Negro swimmers leaving leaving the pool at the end of the first shift were instructed to remain in the locker room for a time.

A group of white boys on bicycles bicycles pursued a group of Negroes to Hebert street, two blocks south of Natural Bridge avenue, where some of the Negroes were beaten up. Another group of Negroes carrying bathing suits arrived at the pool entrance, but did not get in line to enter. When they departed,  some white boys tried to follow them, but police intervened and prevented an attack.

Things quieted when the pool closed at 5 o'clock, but more detectives detectives were assigned to the area. By 8 o'clock, a crowd of several thousand persons had gathered along the south side of the park from Grand boulevard to Vandeventer avenue, and Police Police Chief Jeremiah O'Connell, who arrived to take personal charge, ordered this section of Natural Bridge closed to vehicular vehicular traffic.

truck in which several Negroes were riding was halted by a crowd in the 3700 block of Kossuth avenue. The driver was pulled out and was beaten. Police made their way to his side and formed a protective cordon, the injured man sitting in the street in the center of the circle while police awaited reinforcements.

Before a cruising patrol arrived and carried the man away to the hospital, he was stoned by the crowd, and some of the flying bricks and rocks struck police.

Rolland H. Erbar, 20 years old, 2421A North Nineteenth street, was stabbed in the chest near the heart shortly after 7 p.m. He told police he "felt a sting in the left side" as he entered the Fairgrounds Fairgrounds pool locker room, but did not know who had stabbed him. His condition was termed serious by doctors at City Hospital.

The St. Louis Council on Human Relations commissioned an investigation in the weeks after the riot. The report blamed civic leaders and the segregated school system for leaving St. Louis "psychologically unprepared" for the changing economic and social conditions.

In 1950, a federal judge ordered the pools open to all residents. The ruling later would serve as a basis for the Supreme Court decision that found separate educational facilities were inherently unequal (Brown v. Board of Education in 1954).

A look back at the Congressman who made Missouri the show-me state, or so the tale goes

A congressman's quip during a social gathering in Philadelphia gives life to the show-me boast, although others claim first utterance.

May 21, 1966, the last day of streetcar service in St. Louis. It ended an unbroken run of 107 years of public transportation on rails, sundered by family sedans and cul-de-sacs. 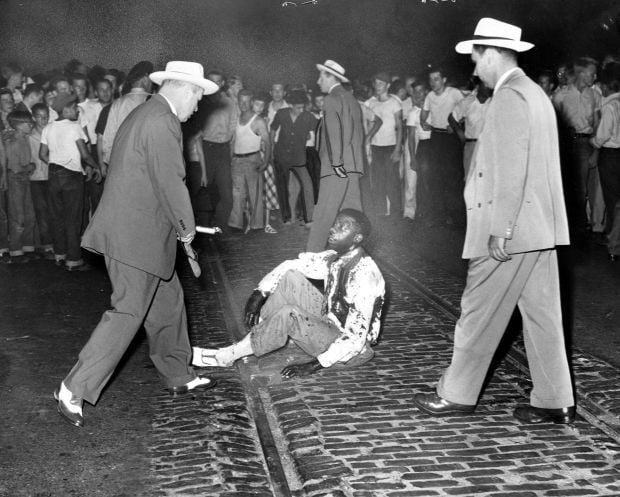 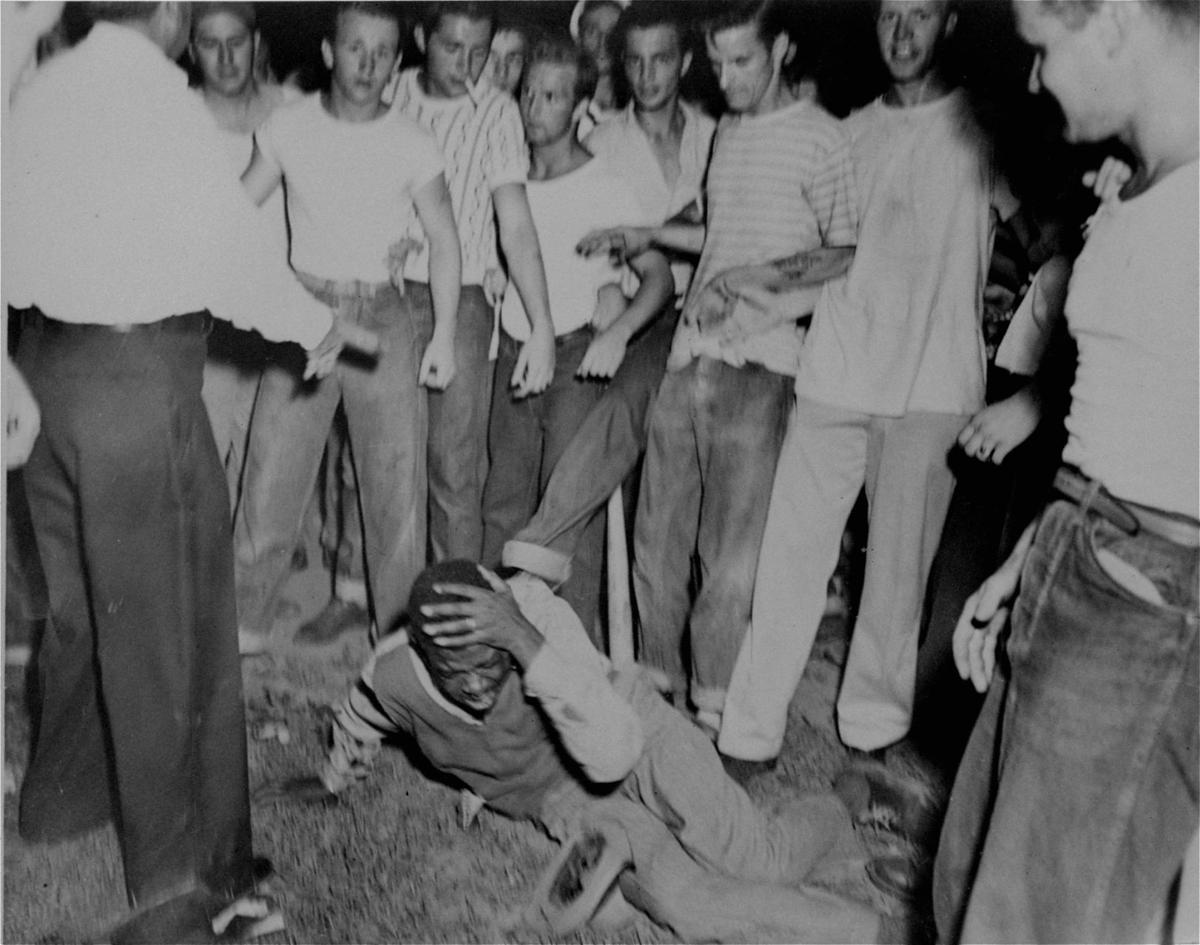 Surrounded by a group of white youths, this unidentified black man grimaces as Police Lt. Nicholas Kube, left, tries to halt an attack on him in St. Louis, Mo., June 21, 1949. Note extended leg, center, of person kicking the man. The incident occurred when blacks and whites fought over rights to a city-owned swimming pool. (AP Photo)
© Copyright 2021 STLtoday.com, 901 N. 10th St. St. Louis, MO | Terms of Use | Privacy Policy
Powered by BLOX Content Management System from TownNews.com.
You don't have any notifications.