On Sept. 14, 1989, the Cardinals drew the smallest crowd in their history of Busch Stadium II. Here's a reprint of our coverage of that game.

Flip page-by-page through historic issues of the Post-Dispatch.

In a game announced only late Wednesday in the aftermath of the five-inning, 0-0 tie with the Pittsburgh Pirates, the Cardinals drew the smallest crowd in the 24 seasons they have inhabited Busch Stadium. Paid attendance was 1,519.

At the start of the game, lost by the Cardinals 4-3, the taste of smoke from a burning Cupples Station warehouse lingered over the fans, who were confined to the lower deck and barred from the right-field bleachers.

''It was like a graveyard with lights,'' Cardinals manager Whitey Herzog said.

Pirates manager Jim Leyland said, ''To be honest with you, it was weird. It was about like a 10 a.m. game in spring training.'' 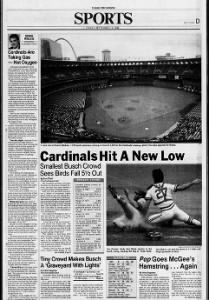 ''I felt like I was back in Gastonia,'' said Van Slyke, who played in that North Carolina city when he was in the Cardinals' organization.

Van Slyke said the empty seats were more distracting than the traditionally full ones.

''Every voice stands out,'' he said. ''I heard some dad disciplining his 8-year-old son.''

Cardinals infielder Tim Jones, who had two hits in place of the resting Ozzie Smith, did Van Slyke's observation one better.

''I heard some dad whack his kid,'' Jones said.

In fact, many of the most enthralling moments of the 2-hour 58-minute game took place in the stands. Because stadium security had corralled fans into sections immediately behind the dugouts, fans aligned themselves in the end seats of each row as a way of gaining the ''pole positions.'' That made it easier to run down foul balls into the empty sections down the first- and third-base lines.

To a large degree, the chasers stayed in their aisles as they sprinted after the balls. Brad Beck, 24, of Alton, said he had trouble wedging into an accessible position.

Van Slyke, Jones and others couldn't help but notice the competition.

''The first time they ran about a mile and a quarter,'' Van Slyke said. ''The second time it was about three-eighths.''

Herzog, who recalled scrambling for baseballs in similar situations at Browns' games, said, ''I got a chuckle out of that.''

Counting those holding rainchecks from Wednesday night's game and others with complimentary tickets, the total in the house was 3,534 Thursday.

The Cards lose their fifth in a row and fall 5 1/2 games behind the Cubs.

Al Santorini strikes out 12 in getting the shutout. Cards (72-79) are 23 games behind Pirates.

Ted Simmons homers and singles and John Denny gets the win. Cards (69-92) are 21 games behind Phillies.

The Indianapolis woman was on the "Rail Blazer," which had been open for less than a month, when she fell to her death.

A Look Back • The day they closed Tony Faust's, the most famous restaurant in St. Louis

Dedicated clientele included the wealthy and powerful and athletes and dandies of all sort.