May 31, 1985: August Busch IV leads cops on a wild chase through the Central West End
0 comments
Share this
{{featured_button_text}}
1 of 2 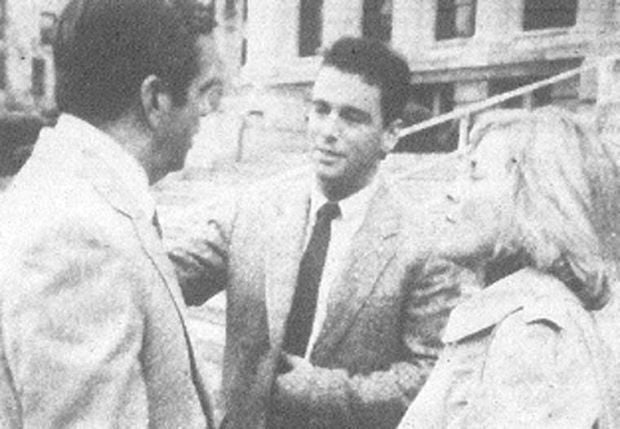 August A. Busch IV, center, is shown with his parents August Busch and Susan Busch in 1986 after his acquittal on assault charges in St. Louis Municipal Court 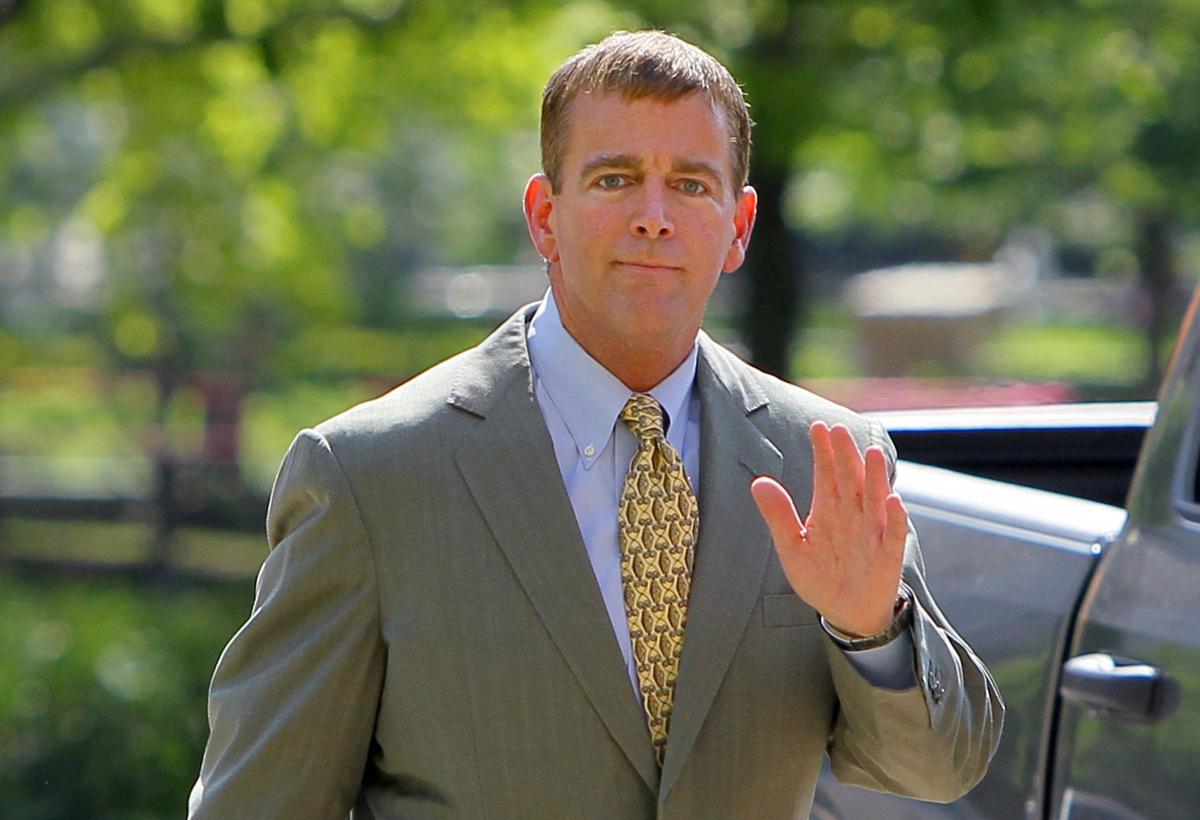 August Busch IV arrives at the courthouse in St. Louis to testify in a civil trial on Tuesday, May 6, 2014. Photo By David Carson, dcarson@post-dispatch.com

By Michael D. Sorkin and Lisha Gayle Of the Post-Dispatch Staff

On May 31, 1985, brewery heir August A. Busch IV was arrested after leading plainclothes drug detectives on a chase through the Central West End. He was acquitted in 1986 on charges he tried to run down two of the detectives in the chase. Here was our original coverage of the chase and arrest.

Four undercover detectives in two unmarked cars chased brewery heir August A. Busch IV through the Central West End early Friday morning. They stopped him by pulling alongside Busch's silver Mercedes and shooting one of the rear tires.

Police officials say that during the 20-minute chase, Busch's car twice almost struck two of the plainclothes detectives who left their cars to approach Busch's sedan. 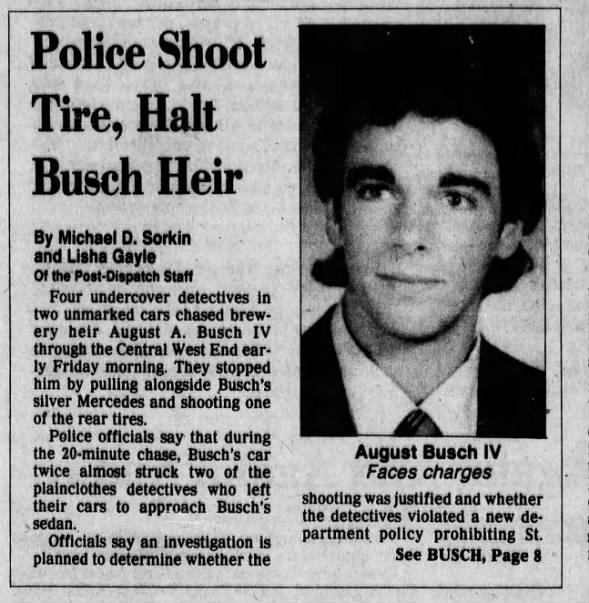 Officials say an investigation is planned to determine whether the shooting was justified and whether the detectives violated a new department policy prohibiting St. Louis police from chasing motorists suspected only of committing traffic violations.

Busch, 20, is the eldest son of August A. Busch III, president and chairman of Anheuser-Busch Cos., Inc. After the car chase, police arrested the younger Busch on suspicion of two counts of assaulting police officers, carrying a concealed weapon and six traffic violations. A statement issued by a spokesman for Busch characterized the undercover detectives, at least one of whom was bearded, as ''apparently impersonating criminal types.''

Busch was released on $8,000 bond less than two hours after his arrest.

High-ranking police officials, including Chief of Detectives James J. Hackett, huddled in a meeting Friday morning to discuss Busch's arrest and the wording of the police report, sources said. Hackett said he did not expect the report to be completed until Monday.

''There's no real demand or hurry for the report, '' Hackett said.

Later, in a statement, police said they had begun chasing Busch about 1:30 a.m. Undercover narcotics Detectives Nicholas Frederiksen and Robert Thomure reported that their unmarked patrol car had nearly been struck from behind by Busch's auto as both cars were entering westbound Highway 40 from Chouteau Avenue.

Busch was returning from a Metro East night spot at the time of the incident, police sources said.

Busch's auto was traveling ''at an extremely high rate of speed behind the police car, '' said Capt. Lawrence Hamilton, commander of the narcotics division.

Frederiksen and Thomure say they chased Busch with a siren on and a red light flashing. He then stopped his car on the side of the highway near the Kingshighway exit, they say. Fredericksen said he had left his unmarked car, approached Busch's sedan and displayed his badge.

According to Hamilton, Frederiksen and Thomure then broadcast a description of Busch's car. The detectives didn't learn Busch's identity until his capture later.

Within minutes, two other undercover narcotics detectives, Junius Ranciville and Dwain M. Wilhite, driving a second unmarked car, saw Busch traveling north on Kingshighway at Maryland Avenue. They chased him with siren and red lights, and Busch stopped, they reported, and Wilhitte then left his unmarked car and approached Busch, displaying his badge.

According to Hamilton, Busch then drove away at a moderate speed and accelerated to between 60 and 70 miles an hour after his auto turned east on Delmar Boulevard.

The car driven by Wilhite and Ranciville then pulled alongside Busch's auto in the 4600 block of Delmar Boulevard, and ''Wilhite shot the left rear tire, which deflated, '' Hamilton said.

Police say they found a .38-caliber Smith & Wesson revolver on the floor of Busch's car behind the driver's seat. One cartridge was in the pistol, and five were found on the floor in the front of the car.

The officers reported that Busch did not resist after he was arrested. Busch told officers, ''I can't help it who I am,'' a police source said.

The source said that after learning Busch's identity, the officers removed the tire they had shot and replaced it with the spare from the trunk of Busch's car.

Hamilton said the tire had been removed only because police wanted to be able to prove conclusively that they had fired only one shot at Busch's tire.

Hamilton wouldn't say what his four undercover detectives were doing when they had encountered Busch. He said all detectives had the option of pursuing speeding violators in unmarked patrol cars.

Hamilton said he was confident the police investigation would show that the detectives had violated no police procedures.

''From what I know now ... I don't see any improprieties on the part of the policemen, '' Hamilton said.

Police guidelines say officers may fire at vehicles ''if the occupant(s) of the vehicle represent a direct and immediate threat to the life or safety of the officer or others.''

A brief statement issued by the public relations firm for Anheuser-Busch said:

''Due to the unusual circumstances of this arrest, which involved unidentified undercover officers, who were apparently impersonating criminal types driving an unmarked car, we are assessing the matter.''

Hamilton said the detectives had turned on a siren in their undercover car and a portable flashing red light before starting the chase.

''I don't care how they were dressed or what kind of car they were driving; if he didn't think they were police officers, he should have driven to the police station and reported them, '' Hamilton said.

Efforts to reach Busch were unsuccessful. When booked at police headquarters, he listed his occupation as ''brewer.'' Busch lives in a one-bedroom condominium in the 4400 block of Lindell Boulevard.

Busch's father, August III, wouldn't elaborate on the statement issued by his public relations firm. ''We can't discuss that right now, '' he said.

''When somebody's got something the size of an auto, and you have to jump out of the way to avoid getting hit, that's considered an assault, '' said Lt. Roy Miller, deputy commander of the narcotics division.

On Friday morning, reporters were barred from examining the record of Busch's arrest at the police lockup. A police captain said he was under orders not to reveal the information, a public record.

The captain wouldn't reveal who issued the order. ''It's someone higher than a captain, '' was his only comment. He later apologized, saying he had misunderstood the order.

Sam Bertolet, chief trial attorney for the St. Louis Circuit Attorney's office, said all of the charges were being taken under advisement until Monday, after the police report is completed.

Bertolet said prosecutors were researching whether the concealed weapons charge could be used for a weapon found on the floor of a car.

The weapons charge is a felony, punishable by five years' imprisonment. The assault charges are misdemeanors, each carrying a maximum sentence of one year in jail apiece.

Busch was cleared last year of manslaughter charges stemming from the death of a girl friend in a one-car crash in Tucson Arizona in 1983. In that case, police found a .44-caliber Magnum pistol inside Busch's black Corvette.

On June 4, 1985, the Post-Dispatch reported that St. Louis' circuit attorney charged Busch with three counts of third-degree assault, a misdemeanor. On April 16, 1986, Busch was found not guilty after a trial in St. Louis Circuit Court. The jury returned the verdict in less than two hours. His defense attorney argued that Busch thought he was being pursued by kidnappers.

A look back • Thousands gather after Charles Lindbergh flies back in his Spirit of St. Louis

Lindbergh, then 25, returned in his Spirit of St. Louis on June 17, 1927, almost a month after his nonstop flight from New York to Paris.

August A. Busch IV, center, is shown with his parents August Busch and Susan Busch in 1986 after his acquittal on assault charges in St. Louis Municipal Court

August Busch IV arrives at the courthouse in St. Louis to testify in a civil trial on Tuesday, May 6, 2014. Photo By David Carson, dcarson@post-dispatch.com 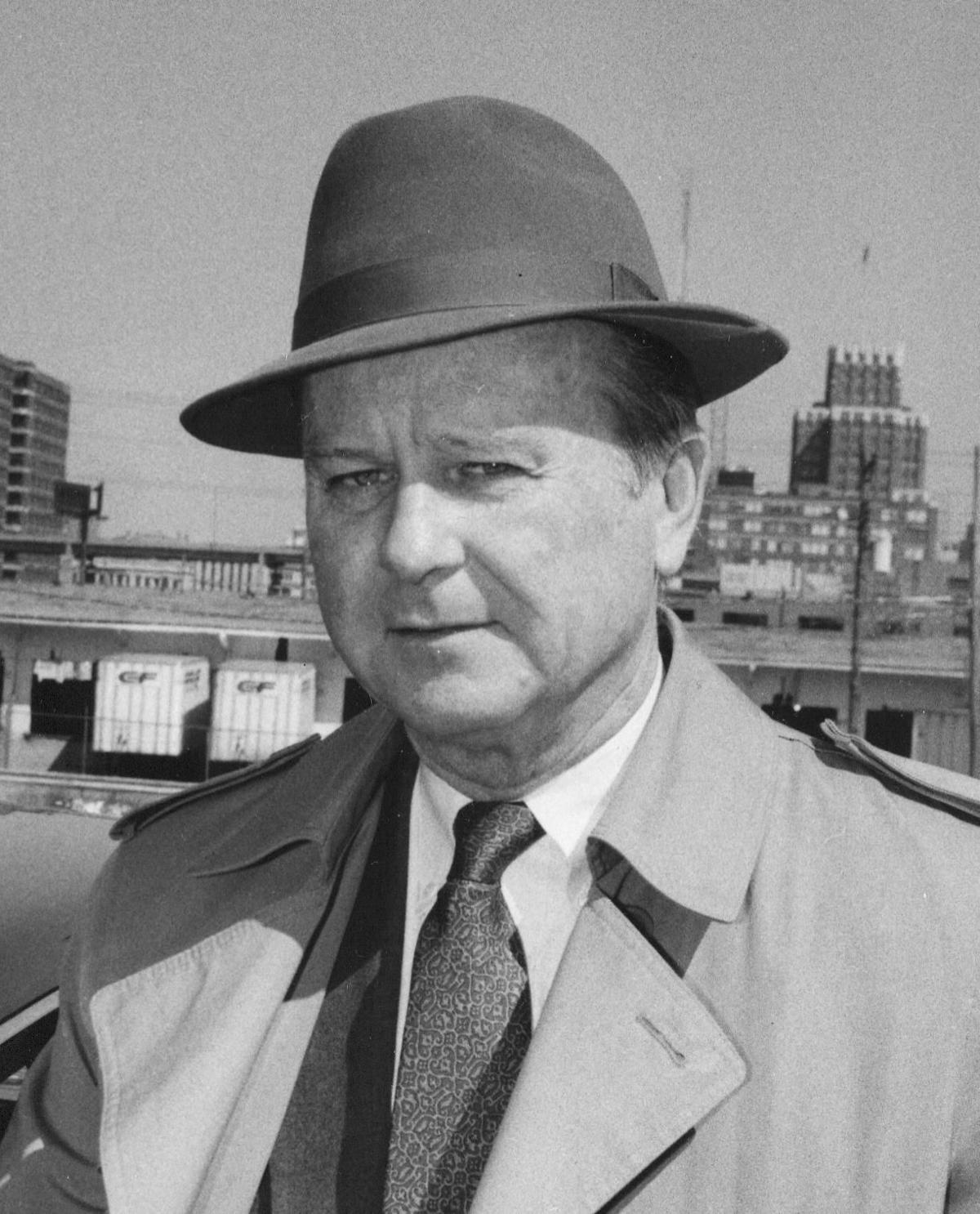