Looking back: Some rarely seen photos from the Forest Park Highlands
0 comments
Share this

The Forest Park Highlands was a popular amusement park at 5600 Oakland Avenue, across from Forest Park, for almost seven decades until a spectacular fire destroyed most of it in July of 1963.

It opened in 1896 as the Highlands Cottage Restaurant, but business didn't pick up until it added a merry-go-round to attract customers. The owners added more rides the next year, transforming the beer garden into an amusement park.

On Jan. 28, 1934, The Forest Park Highlands Amusement Park announced a $50,000 rehabilitation program to replace the "Scenic Railway" with "The Flying Turn."

By the time of the fire on July 19, 1963, the 14-acre park had nine children's rides and 14 major ones, including a roller coaster known as the Comet. On the site now is the St. Louis Community College at Forest Park.

Take a look back at some rarely-seen photos of the Highlands. 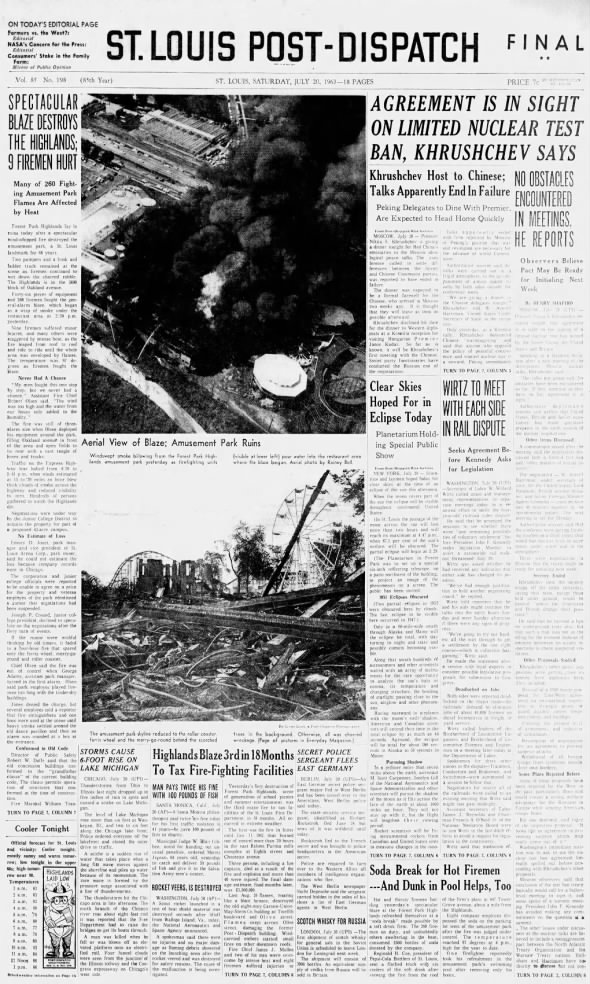 We love the '80s! A look back at the first decade of the VP Fair

The VP Fair, now known as Fair St. Louis, began in 1981 on the riverfront under the Arch. The '80's were very good to the Fair, with attendanc…

You stay classy, St. Louis: Ads from the golden age of TV news

Ron Burgundy wasn't the only news anchor who was kind of a big deal.

On July 11, 1983, Elaine Elizabeth Downs was crowned Miss Universe before a crowd of nearly 10,000 visitors and 11 celebrity judges at Kiel Au…