The St. Louis blizzard of 1982: We didn't see it coming
0 comments
Share this
{{featured_button_text}}
BY TIM O'NEIL St. Louis Post-Dispatch

ST. LOUIS • Heavy rain swelled the creeks on Jan. 30, 1982, then the rain turned to snow. With only 4 inches of snow forecast, the worry was flooding. Lightning illuminated the snowfall as most people went to bed that Saturday night.

They awoke next morning to a winter wonderland unseen here in 70 years. Lambert Field recorded 13.9 inches of snow, but the airport was on the low slope of the storm's worst. 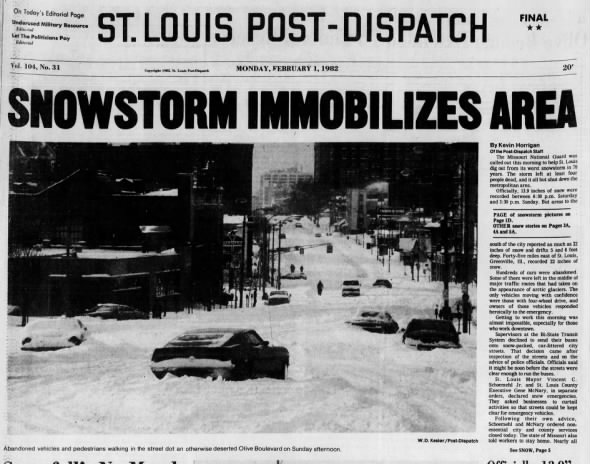 Follow-up National Weather Service reports put the totals for most of the city, southwest St. Louis County and Jefferson County at 18 inches or more. Madison County had 17 inches, St. Clair County 15. The Greenville, Ill., area was buried under 2 feet. Fifty miles to the north and south of the Gateway Arch, accumulations were light.

Hundreds of motorists abandoned vehicles on highways and streets. Buses and heavy trucks got stuck in traffic lanes. Police nabbed a burglar by following his footsteps. At 9 a.m. Sunday, Jan. 31, Edwardsville firefighters David Carnaghi and Capt. Dennis Henson helped to deliver Sharon Miller's 9-pound son in the back of their ambulance, stuck on Interstate 55.

"The baby is fine. Those guys were just great," said Miller, eventually safe and warm in a hospital.

Snowplows worked nearly round the clock, but there was too much snow to push away. It would take most of a week, at heavy cost to public budgets, to clear the main roads.

The action heroes were civilian owners of four-wheel-drive vehicles, who became the locomotion for police departments, medical services and repair crews. They delivered medicine to the sick and milk to babies, and doctors and nurses to hospitals.

10 times the Mississippi River froze over in St. Louis

The river froze over at St. Louis at least 10 times from 1831 to 1938, when completion of the Alton Lock and Dam corralled much of the ice fro…

Jackie Taylor of Ballwin walked to her job at a pizza parlor. She made 30 pizzas that Ballwin firefighters delivered to a nursing home, where none of the staff showed up.

Amtrak and Greyhound stopped running. Lambert cleared its runways, but few passengers could get to their flights. Bi-State canceled most bus routes for two days. Public officials urged workers to stay home - an easy call to honor, given the state of most driveways. The Missouri National Guard cleared downtown's main streets with front-end loaders and dump trucks.

At least 16 people died, most of them stricken while shoveling snow. Most schools didn't even try to reopen until Monday, Feb. 8.