ST. LOUIS • The doughboys formed ranks in favor of "100 percent Americanism" and against the city of Chicago.

The veterans of World War I who created the American Legion first met on American soil in a theater downtown on May 8, 1919. The killing had ended six months before. They adopted a national constitution, promoted employment for veterans and cheered Col. Theodore Roosevelt Jr., a war hero and son of the late former president.

The 1,079 delegates gathered in the Shubert-Jefferson Theater of the Union Electric building, Olive and 12th streets. By happy coincidence, St. Louis also was hosting a raucous welcome home for the 138th Infantry Regiment. The unit had formed here and fought in the Argonne Forest in France in the last weeks of the war. 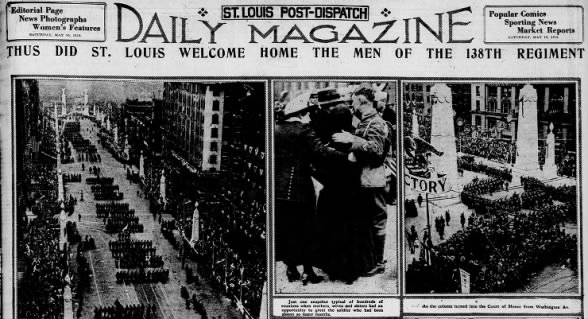 On May 9, the 138th's soldiers marched through cheering mobs and passed in front of the Shubert-Jefferson, which became a convenient reviewing stand for legion delegates who mingled with the crowds.

"What a handsome leader," a woman shouted to Sgt. Ross Koen as he led L Company down 12th (now Tucker Boulevard). Jimmie Dutton broke through the police line and hugged his marching big brother, W.B. Dutton. Choruses of church bells and locomotive whistles added to the racket.

The 138th had paid dearly for the honor — of 3,500 men who signed up, 230 were killed in combat. Accidents and wounds increased the casualty rate to almost 50 percent. The survivors stepped off trains at the Wabash station near Forest Park and marched downtown in formation with rifles, packs and helmets.

They enjoyed the welcome. But Cpl. Tom Boatwright of Herculaneum said, "I want to get back into civilian clothes."

Two months earlier, legion organizers in France had decided to reconvene here. They were inspired by the Grand Army of the Republic, the association of Union soldiers that had been so influential in the decades after the Civil War.

But their first wish was thwarted. Chanting "We want Teddy," delegates tried to draft Roosevelt Jr. for chairman. "This is going to be a short speech," Roosevelt said — and quickly declined.

Delegates then voted to boycott Chicago as long as Mayor William "Big Bill" Thompson was mayor. A neutralist early in the war, Thompson had allowed an anti-war rally in his city.

Army regulations required the 138th to reboard trains for Camp Funston, Kan. (Fort Riley), to be discharged and sent home. The legion held its first convention that November in Minneapolis, returning here for conventions in 1935, 1953 and 2003. The old UE building was demolished in 1976. The Missouri National Guard's 138th Infantry, now based in Kansas City, still has a unit here.

1919 The first meeting of the American Legion

May 21, 1966, the last day of streetcar service in St. Louis. It ended an unbroken run of 107 years of public transportation on rails, sundered by family sedans and cul-de-sacs.

The night the first drive-in theater opened in St. Louis

On May 24, 1940, the first drive-in theater in the St. Louis area opened on what today is the spot of West County Center.

The May 19, 1961, ordinance passed by a wide margin with little debate or dissent. The moment offered barely a hint of the long, difficult effort to achieve simple fairness at city lunch counters.

How a blaze on steamboat sparked an inferno that changed the face of downtown St. Louis.

A Coast Guard inspector's hammer goes right through the thin, corroded hull of the S.S. Admiral. Its owners announced cruises would end that year.

How the growth in St. Louis suburbs exploded after World War II

One of the Civil War's earliest, ugliest scenes took place on what is now St. Louis University

On May 10, 1861, Southern sympathizers mocked German soldiers as "Hessians." A few threw rocks. Somebody fired shots. Union troops opened fire and at least 28 civilians and 7 soldiers were killed.