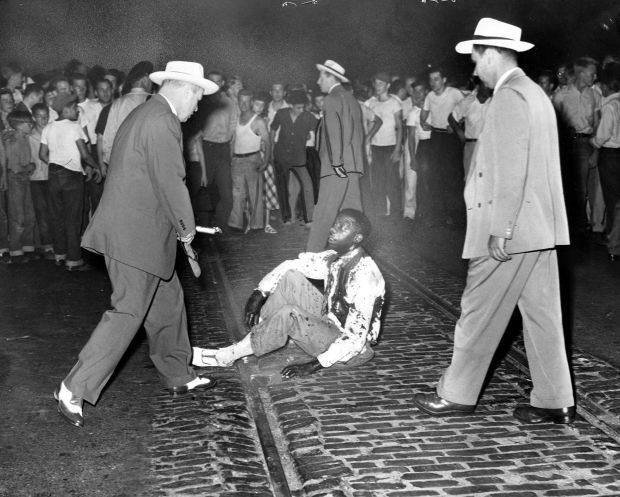 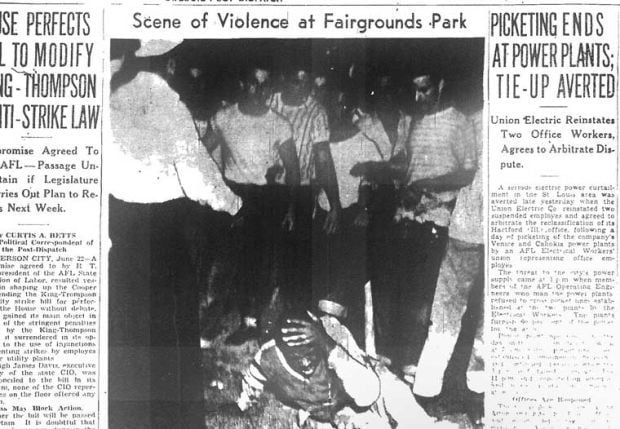 Fairgrounds Park in St. Louis erupted in violence after the swimming pool was integrated on June 21, 1949. Post-Dispatch file.

ST. LOUIS • Robert Gammon had no clue how much everything was about to change. He was barely a teenager 60 years ago Sunday, just another youth trying to cool off at the Fairground Park swimming pool.

Then he remembers the taunts, the bricks, the fights - the fear. There was another moment, too. As he left the pool area, he passed a white woman with a baby carriage. She spit at him.

It was June 21, 1949, a Tuesday, the first day blacks were allowed entry into St. Louis municipal swimming pools that were previously white-only. The decision to integrate the pools resulted in what is considered the most widespread outbreak of racial violence in the city's post-World War II history.

The rampage drew thousands to the park, many brandishing bats, clubs, sticks and knives. Groups of white youths marauded through the park, pummeling unsuspecting victims. It took more than 400 police and nearly 12 hours to restore order.

By then, more than a dozen people were injured; at least eight had been arrested. And St. Louis had received a jolt to its comfortable Jim Crow ways.

"It's a fascinating story that reflects great, huge historic events," said Ken Jolly, a history professor at Saginaw Valley State University in Michigan who has studied the riot. "It localizes it. It played out right here."

Gammon, then 13, never suspected trouble when he heard on the radio that the pool would be open for blacks. He had always wanted to swim in the outdoor pool with the wooden diving platform in the center. By the time he had dried off and headed for home, he had never felt so afraid.

For some who lived in the city at that time, the riot remains a defining moment in their lives. It would take years before Gammon felt he could trust whites again.

"I thought all white people hated us."

St. Louis, like much of the country, was struggling with segregation and the burgeoning civil rights movement in 1949.

Some barriers had fallen. Blacks sat with whites in ballparks, on trolleys, and at the Municipal Auditorium and Municipal Opera.

Most blacks lived in a corridor stretching from the river to Kingshighway. As the city's black population surged after the war, they moved into neighborhoods vacated by middle-class white families who were moving to the suburbs.

The city had maintained a somewhat vague policy of separate parks, community centers and swimming pools. As the demographics changed, many black residents took over parks previously reserved for whites, often creating tension. In 1946, the Ku Klux Klan burned a 10-foot cross in the Buder playground after blacks began using it.

On June 19, 1949, Webster Groves opened a new public pool and denied blacks entry. Reporters asked a St. Louis official whether blacks would be allowed to use city pools scheduled to open two days later. The official said he would "not be a party to an unlawful gentleman's agreement."

Blacks would be admitted to the pools.

The order to eliminate separate facilities was made with little consultation or planning. Within 48 hours, it was the talk of the town.

When the Fairground pool opened, several hundred boys lined up to enter. About 30 to 40 were black, according to reports from the time. Everything at the pool appeared to be fine.

Just beyond the pool was another matter. As many as 200 white youths gathered at the fence and shouted threats and obscenities. Adults soon would join them. When the first swim session ended at 3 p.m., a custodian kept the black swimmers in the dressing room until a police escort could be arranged.

Once the police escort broke up, whites chased Gammon and his friends to St. Louis Avenue before giving up. He said one friend was hit in the head with a thrown brick.

As the day went on, crowds swelled and more fights erupted. An account published in Time magazine described the scene:

"Negro boys were chased and beaten by white gangs. In the gathering dusk, one grown-up rabble-rouser spoke out. 'Want to know how to take care of those niggers?' he shouted. 'Get bricks. Smash their heads, the dirty, filthy "-".'"

J.C. Tobias, who now lives in Florissant, remembered walking from the park's baseball diamonds toward the pool with a half-dozen friends. They never made it. A mob chased the terrified teens, who sprinted to a streetcar to escape.

"When you're a kid, you don't think much about it," said Tobias, now 74. "As you age, you realize it didn't make much sense. We were just up there to swim."

By dark, the crowd had grown to 5,000, including many who were on their way to a Cardinals game at nearby Sportsman's Park. Some circled the area in trucks. Women, some with young children, were evident in the crowds. Violence spilled into surrounding neighborhoods.

Harold Wilson, 76, remembers how quickly news of the trouble ricocheted around his neighborhood just north of downtown that day. At least 15 people were injured, including two with stab wounds.

Wilson recalled how fights involving whites and blacks broke out in other parts of the city that day, and for a few days that followed.

"Where we lived, the white folks had to come through to get downtown," Wilson said. "We'd stand out there throwing bricks at the streetcars."

The newly formed St. Louis Council on Human Relations commissioned an investigation in the weeks after the riot. The report blamed civic leaders and the segregated school system for leaving St. Louis "psychologically unprepared" for the changing economic and social conditions.

In 1950, a federal judge ordered the pools open to all residents. The ruling later would serve as a basis for the Supreme Court decision that found separate educational facilities were inherently unequal (Brown v. Board of Education in 1954).

Meanwhile, many whites boycotted the Fairground pool, and attendance dipped. The landmark pool was closed in 1956.

Some scholars said the riot dramatized institutional racism and inequality, and focused public attention on the need for reform.

The incident provided valuable lessons that allowed St. Louis to escape the violent racial unrest that plagued many other American cities in the decades that followed, Jolly said. "It changed the environment."

The riot also fueled the city's nascent civil rights movement and galvanized a black community that some say had been slow to confront racial disparity.

"That was really the first trigger," Wilson said. "As a result of that, changes were made and continue to be made."

Marvin Rich fought for integration of Washington University while a student there in the late 1940s and took part in efforts to integrate the city's lunch counters and pools. Rich believed in nonviolent protest and remembers being terrified by the pool riot. Still, he took satisfaction in the ultimate outcome.

"Every victory was important. Each change made it easier to do the next one," said Rich, who later went on to become community relations director for the Congress on Racial Equality, a leading civil rights organization.

Recently, Robert Gammon, who now lives in University City, returned to Fairground Park. He leaned against the fence surrounding a pool built near where the original one was. His views on race have changed over the years. He no longer thinks all whites hate him. Some he considers friends.

"I wish it never happened," he said gazing through the chain link. "We're all human."

Gammon thinks things are a lot better now. But there's still a way to go. In the pool, a dozen people splashed in the water. All of them were black.

The CDC on Thursday will ease indoor mask-wearing guidance for fully vaccinated people, allowing them to safely stop wearing masks inside in many instances.

Gunman kills 6, then self, at Colorado birthday party

A man opened fire at a birthday party in Colorado, killing six people before killing himself.

After a recommendation to disband UMSL's Physics Department, the undergraduate program earned a reprieve.

Officials: Turkey hunter who shot a jogger in St. Charles County may have violated regulation

Hunter told a game warden he fired at a turkey, but some of the pellets hit the man on the trail about 50 to 60 yards away. The hunter may have violated regulations, the report says.

Fairgrounds Park in St. Louis erupted in violence after the swimming pool was integrated on June 21, 1949. Post-Dispatch file.