ST. LOUIS • In the years after World War II, civic leaders believed in solving big problems with sweeping projects. That sort of thinking, after all, had won the war.

They regarded old, decaying neighborhoods — slums — to be the city's biggest postwar challenge. Their answer was to fire up the bulldozers.

On Aug. 7, 1954, Mayor Raymond R. Tucker announced plans to demolish commercial buildings and 5,600 dwelling units across 465 acres of the Mill Creek Valley, running west from Union Station to St. Louis University. For three more days, front-page headlines spread praise all around for Tucker's bold vision. It would become the city's biggest urban-renewal project and, for a time, the largest in the nation. 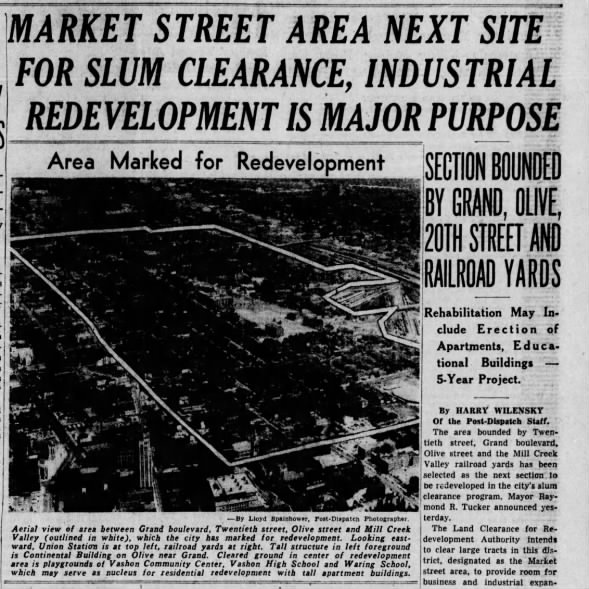 The Mill Creek area dates to 1765, when Joseph Miguel Taillon built his stone grist mill along a creek that ran from present-day Vandeventer Avenue to the Mississippi River. A man-made lake called Chouteau's Pond was a local attraction until pollution and cholera epidemics led to its draining in 1852. Railroad yards and smoky factories moved in, although some of the neighborhoods remained fashionable into the 20th century.

By World War II, Mill Creek's tenements and faded town houses were home to nearly 20,000 people, many of them poor blacks who had migrated north from the cotton fields. More than half the dwellings lacked running water, and 80 percent didn't have interior bathrooms.

Tucker proposed knocking over nearly everything and starting over. In 1955, city voters overwhelmingly approved a $10 million bond issue for demolition, on the promise that the federal government would reimburse most of it. The local NAACP endorsed the idea. Work began on Feb. 16, 1959, at 3518 Laclede Avenue, where a headache ball smashed a house that dated to the 1870s.

The bulldozers swiftly transformed the city's "No. 1 Eyesore" into an area derided as "Hiroshima Flats." Among the few buildings spared was the old Vashon High School, now part of Harris-Stowe State University. When work began in 1961 on University Heights Village apartments, only 20 original families still called Mill Creek home.

The LaClede Town apartments opened in 1964 and became a bohemian village of sorts, but fell into another round of decay within two decades. They were demolished to much less fanfare in 1995.

A history of Mill Creek Valley

The verve and versatility of radio legend Jack Carney. A look back at a St. Louis icon

With the first news bulletins, frantic people grabbing for telephones overwhelmed the circuits. They gathered around office radios and jammed appliance stores to follow the jumbled live TV news reports.

A Look Back • The path to women's suffrage became a rocky road in St. Louis

At group's third annual convention on Nov. 21, 1872, an activist tried to register downtown to vote but she was rebuffed.

Do you remember the South Twin Drive-In? A look back at a St. Louis icon

On Nov. 19, 1954, the South Twin Drive In Theater, the first twin-screen drive-in theater in St. Louis opened at Buckley and Lemay Ferry.

50 years ago: The bells at St. Ambrose rang as The Hill celebrated a major victory

On Nov. 18, 1971, The Hill neighborhood celebrated a state decision to build an overpass over Highway 44 that linked sections that had been divided by the highway's construction.

Gaslight Square burned brightly in the 1960s. What went wrong?

On Nov. 1, 1965, police declared Gaslight Square one of the safest sections of the city, but the public wasn't buying it.

'This place has class.' 26 years ago, St. Louis celebrated the opening of the Trans World Dome

Looking back: The day Harry Caray was nearly killed while trying to cross Kingshighway