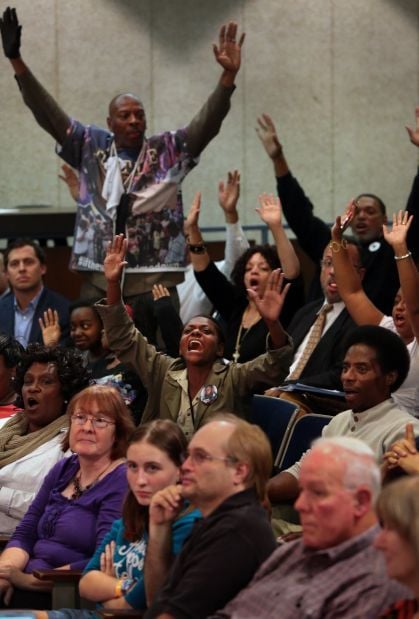 Ferguson protesters voice concerns at a meeting of the St. Louis County Council on Tuesday, Sept. 16, 2014. Others attending Tuesday's meeting spoke on the zoning of the subdivision of Suson Hills. Photo by Robert Cohen, rcohen@post-dispatch.com 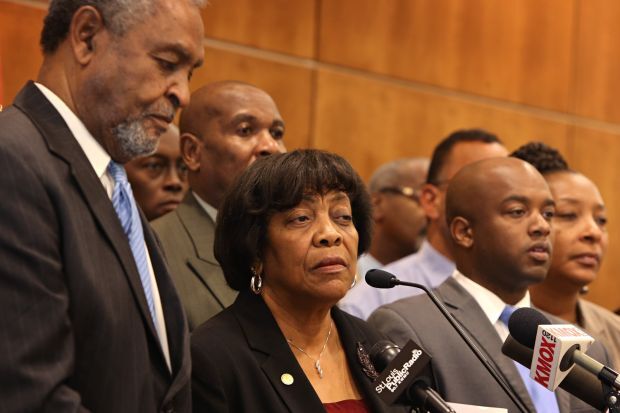 BERKELEY   •   A newly-formed coalition of African-American Democrats announced Wednesday they will not back any candidate that has exhibited “disrespect” for the black community on issues such as education, jobs and racial profiling.

Erby hedged when asked if the coalition would instead stand behind Republican state Rep. Rick Stream or put forth the name of a write-in candidate in November.

“We are exploring our options,” she told a Wednesday morning press conference at Berkeley City Hall.

Berkeley Mayor Theodore Hoskins was not as circumspect.

“Steve Stenger does not have the best interests of our community,” he said.

Flanked by 35 mayors, council members representing several North County municipalities and state representatives, Erby emphasized that the coalition does not plan to “single out a specific” public official in the November election and beyond.

In a prepared statement left mostly unread publicly, Erby said, “We are all serving notice that we are not going to support candidates just because they have an insignia of a donkey behind their name.”

Erby said after the news conference that the momentum for forming the coalition began when Missouri Gov. Jay Nixon and other state officials ignored offers of input from county African-American leaders during discussions on how to resolve transfer issues and other problems facing the Normandy School District.

"We've been discussing the lack of respect for quite awhile now," the councilwoman said.

The protests following the Aug. 9 shooting of Michael Brown by Ferguson Police Officer Darren Wilson, she added, escalated the call for African-American Democrats to take an independent stance.

Barely 12 hours before Wednesday's announcement, up to 200 demonstrators disrupted a County Council meeting with calls for the arrest of Wilson, the removal of County Prosecutor Robert McCulloch from the Brown case and other calls for action.

"I support them," Erby said Wednesday of the demonstrators, reiterating a point she made at the council meeting. "And I support their right to come out and speak out."

This is a developing story please check back to stltoday.com for updates.

Nixon creates 'Office of Community Engagement' in wake of Ferguson

Will address issues in Missouri low-income and minority communities.

More than 100 new voters have registered in the community since Michael Brown's shooting.

Arrests for unlawful assembly and assault as police successfully block protesters from I-70 exit and entrance ramps.

Ferguson quiet, Patricia Bynes prepares for the challenge ahead

A vow to be part of the change growing out of a "defining civil rights moment."

A $1 million allocation for residents, funds also on way to assist businesses.

Ferguson protesters voice concerns at a meeting of the St. Louis County Council on Tuesday, Sept. 16, 2014. Others attending Tuesday's meeting spoke on the zoning of the subdivision of Suson Hills. Photo by Robert Cohen, rcohen@post-dispatch.com