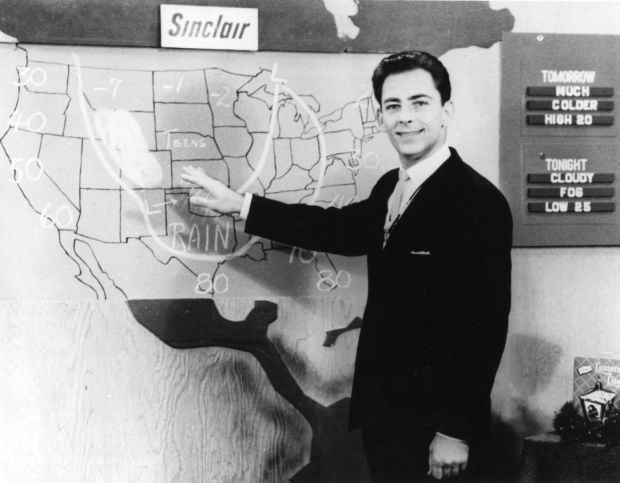 Undated photo of Howard DeMere posing in front of the KSD weather map. 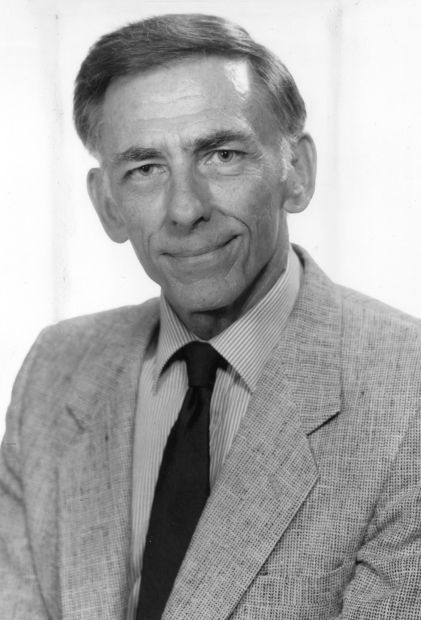 He is remembered for his signature sign-off: “That’s all from here, Howard DeMere.”

When he started in 1949, he was the only TV weatherman in St. Louis. He held that distinction for several years while Channel 5 (now KSDK-TV) was the city’s first and only TV station.

He was not St. Louis’ first TV weatherman. That was Jack Garrison, who did a brief stint on the air at the station before taking a sales job, according to a station history.

For nearly 32 years, Mr. DeMere remained a familiar face and voice as a television weatherman and news reporter for Channel 5, then known as KSD, and KSD radio.

William Howard DeMere died at his home in University City after a heart attack, said his wife, Nancy DeMere.

His earliest TV broadcasts included reports from Korea, where he was serving as a lieutenant in the Army during the Korean War.

On KSD radio, Mr. DeMere played records and did the weather during his first 19 years.

He was known for a pair of high-class evening radio programs, “Metronome” and “Mem’ries ’til Midnight,” featuring old time dance bands and singers.

He also did the radio news, which he said at the time was targeted primarily at women in the 25- to 34-year-old age group. The station hired a consultant who concluded that listeners didn’t want a lot of news.

Mr. DeMere said the survey showed there was little interest in foreign news: “People don’t care what’s happening in the Middle East unless it can be translated into what it will mean to the cost of a gallon of gasoline,” he told the Post-Dispatch in 1977.

On TV, he was a weatherman before computers and radar. He started out doing the weather on a simple, wooden set. He used a felt-tip pen and plexiglass to illustrate his forecasts.

Toward the end of his career, he worked to overcome the soft image with which his on-camera weather reports had saddled him.

“He did so successfully,” Post-Dispatch columnist Eric Mink wrote in 1981, “and, in time, became respected as an able, experienced local reporter.”

Mr. DeMere grew up in Wichita Falls, Texas, during the Great Depression. He was a shy boy, he later told an interviewer. His mother thought he should know how to speak well and got him to enroll in speech and drama classes.

Radio was the dominant technology at the time, and a cousin with a radio station gave him a job during high school. In World War II, Mr. DeMere served in the Navy, before returning to attend the University of Oklahoma.

He was offered a radio job in Oklahoma City, and moved there with his first wife. During a 1949 trip to interview with a station in Chicago, he stopped in St. Louis. That’s when KSD radio and TV offered him a job.

St. Louis’ first TV station had been on the air for only a year and a half. The station didn’t sign on the air until 3 p.m. and was dark on Tuesdays and Sundays.

“I was an unwitting pioneer, and we used very rough and crude equipment and methods to get on the air,” Mr. DeMere recalled in an interview with The Patch. He became the anchorman for what would become Channel 5.

Competition increased as other stations signed on the air during the 1950s.

Each anchor had his or her own sign-off. Some of the most famous: “Good night, and good luck,” (Edward R. Murrow). “That’s the story ... for Timex. It takes a licking and keeps on ticking” (John Cameron Swayze).

Mr. DeMere came up with, “That’s all from here....” He said he kept the slogan even though the stagehands kidded him relentlessly.

Mr. DeMere was divorced when he met Nancy Lee in 1972. He was a pilot with a single-engine plane and, for their first date, took her flying over St. Louis at night. They married in 1974.

Mr. DeMere resigned from TV and radio in 1981. He was unhappy with KSD radio’s switch from all-news to country music and his subsequent reassignment from news reporter to weather reporter.

He became chief of the public affairs office for two Army commands here.

In 1991, he suffered a heart attack. He had been an avid cyclist who thought he was in good shape, a former colleague said.

In recent years, he organized reunions of KSD employees at Miss Sheri’s Cafeteria on Manchester Road.

Survivors, in addition to his wife, include a daughter, Marsha Gebhardt of Ferguson; a son, Jeffrey DeMere of North County; six grandchildren; and four great-grandchildren.

Editor's note: This story was updated to correct the spelling of Dianne White's first name.

Undated photo of Howard DeMere posing in front of the KSD weather map.