Become a Member
Read Today's E-edition
Share This
McClellan: A tale of pancakes and mysteries from afar
0 comments
Share this
1 of 2 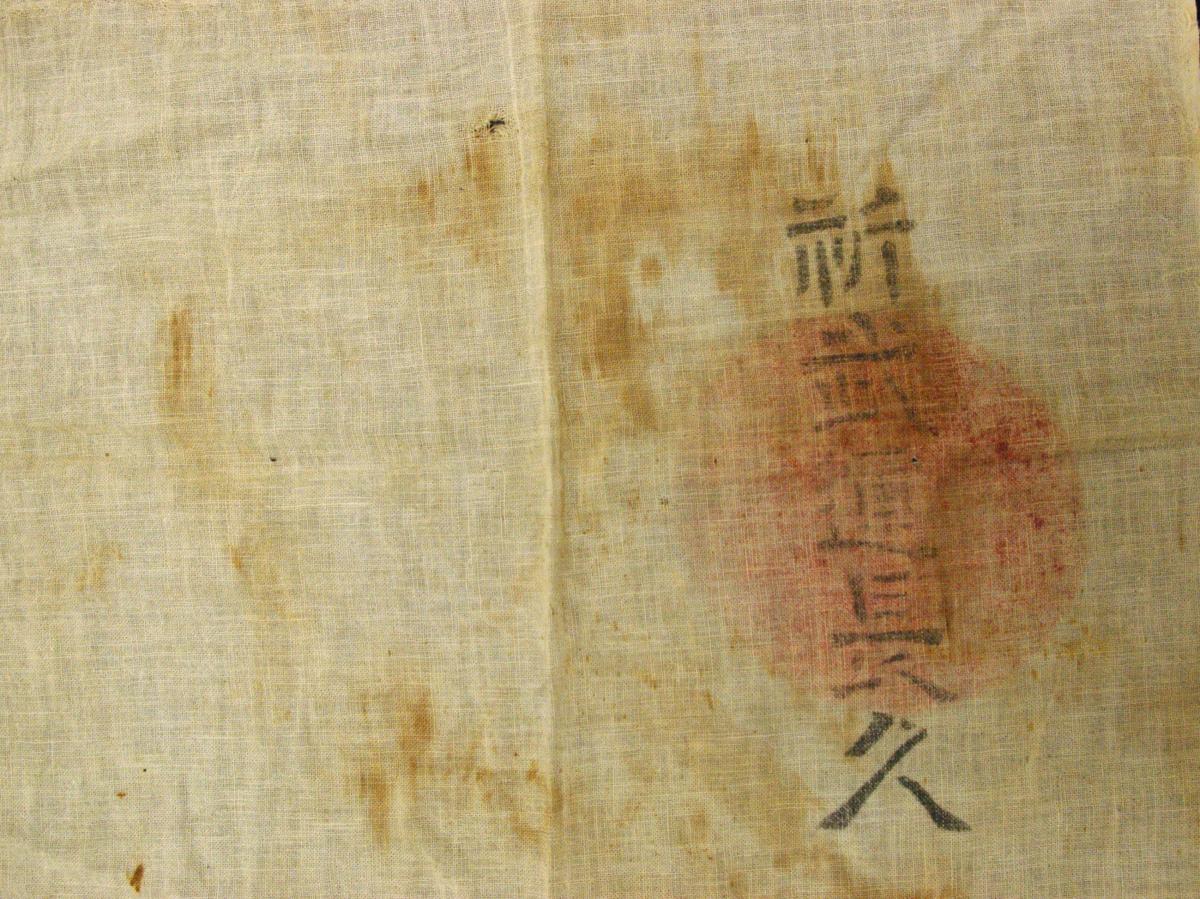 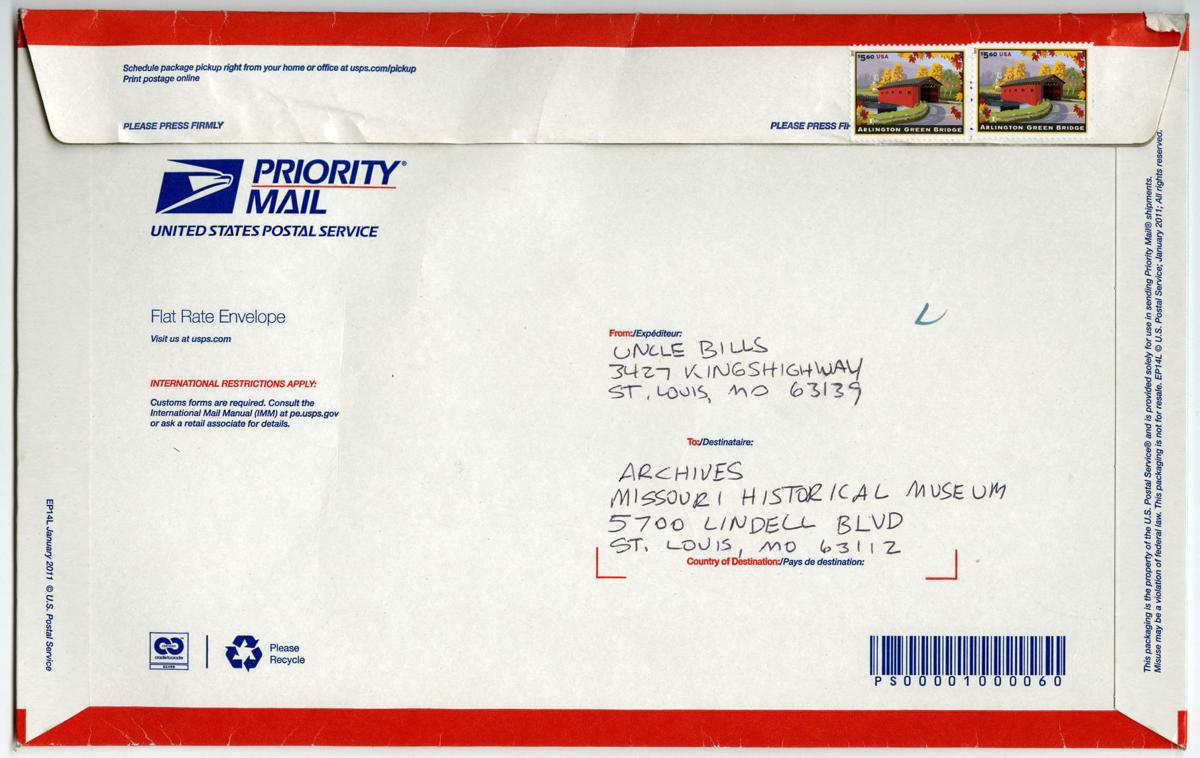 This was the packaging in which the Japanese cloth arrived at the museum. (Photo courtesy of Missouri History Museum)

One day last fall, an envelope arrived at the Missouri History Museum. It was addressed to Archives, and so it ended up on the desk of Molly Kodner, the museum’s head archivist.

The museum no longer accepts unsolicited packages, but you don’t make a career at a history museum if you don’t possess a certain innate curiosity. Kodner looked at the return address — Uncle Bill’s Pancake House on South Kingshighway — and opened the envelope. She expected to find photographs or old menus — people send a lot of old menus to the museum — but instead there was a soiled piece of cloth.

No. Something more intriguing.

There was calligraphy — five characters. Also, an image that seemed to be the Rising Sun of Imperial Japan. Finally, dark stains, perhaps blood.

There was no note with the cloth.

Kodner called Chris Gordon, director of library and collections. He looked at it and called Patrick Allie, the military curator. They both thought the cloth was interesting, but it was no use to the museum without a backstory. And what, exactly, was it?

Kodner tried to find out. She called Uncle Bill’s Pancake House. No leads there. She put a story and photo on the museum’s website. “Have you seen this handkerchief?” She wrote that the museum could not use a piece without knowing something of its background. What was its provenance?

“I do not want to dispose of this handkerchief because I know it has a story,” she wrote.

Nothing. She put a link to her blog on “STL yesterday.” She started getting emails. Nobody seemed to know, but people were making educated guesses. Probably a World War II item. (That had been the museum’s guess, too.) Maybe a prayer flag. Nope. Too small.

Then somebody forwarded her story and photo to a man in Japan, Tadashi Tsukamoto.

It appears to be a belly band, Tsukamoto wrote. He explained that the history of these articles dates back almost 1,000 years, to a time when Japanese warriors wore armor as protection from swords and arrows. When weaponry outpaced armor, cloth belly bands — called haramaki — became good luck charms, talismans.

When a young man was drafted into the Army during World War II, his family would often present him with such a belly band. Traditionally, the family would put the recipient’s name on the cloth. Sometime they would try to get 1,000 people to each contribute a stitch to the final product. In this instance, there was no name and no evidence of stitches.

The battle fortune did not continue long enough, Tsukamoto suggested. The man was killed and part of the belly band was lost or torn away. Without the name, there is no way to make a search for his family, Tsukamoto wrote.

“If I am allowed to make my personal suggestion, I would say that it would be desirable to burn the cotton cloth armor in a hope that the resulting smoke would be able to meet the man who wore it,” he wrote.

Kodner emailed Tsukamoto. Should there be a particular ceremony for the burning? She wondered if the Japanese Garden at the Missouri Botanical Garden would be an appropriate site. “If ceremony is not the best option, I’m wondering if it would be best to return the cloth to someone in Japan,” Kodner wrote.

“I am extremely grateful for your respect to the cotton cloth,” Tsukamoto responded. He suggested the most appropriate course of action would be to send the cloth to him and he would take it to the Yasukuni Shrine, which he described as a rough equivalent of Arlington Cemetery. It would burned there in a Shinto ceremony called “Otakiage.”

“At this opportunity, I send my sincere appreciation for your extremely thoughtful handling of the Japanese cloth. I am pleased to have had the opportunity of being involved in this heart-warming matter,” he concluded.

And so the story of the cloth ends in good will and smoke. The beginning, where the cloth came from and who wore it, we’ll never know. What about the middle? Who brought it home from the Pacific and who sent it to the History Museum?

The U.S. Army fought in the Pacific and, more famously, so did the Marine Corps. Somewhere in the region, perhaps in south St. Louis, is an old veteran who likes pancakes. He knows about the middle.

From 1961 to 2013, Guido Weiss was the preeminent mathematician at Washington University.

This was the packaging in which the Japanese cloth arrived at the museum. (Photo courtesy of Missouri History Museum)