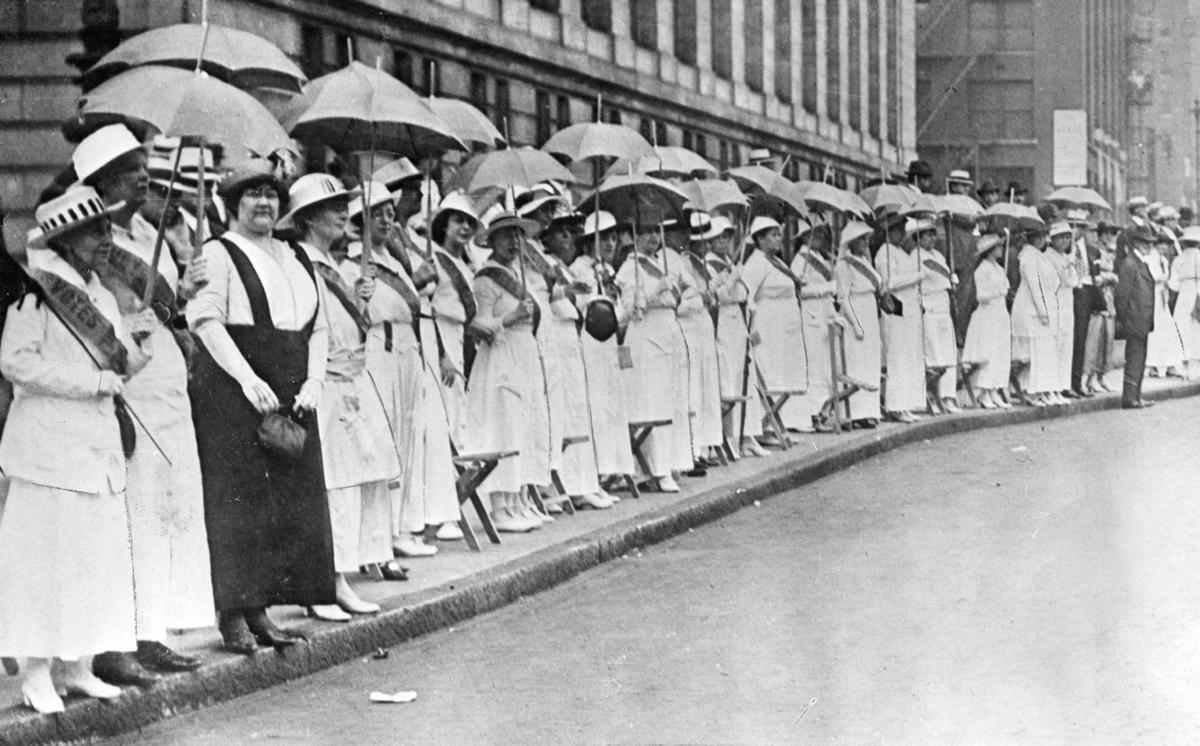 Women take part in the Golden Lane, a silent demonstration along Locust Street on June 14, 1916, the opening day of the Democratic National Convention in St. Louis. More than 2,000 women dressed in white and holding yellow parasols stood along Locust as delegates passed by on their way to the convention. 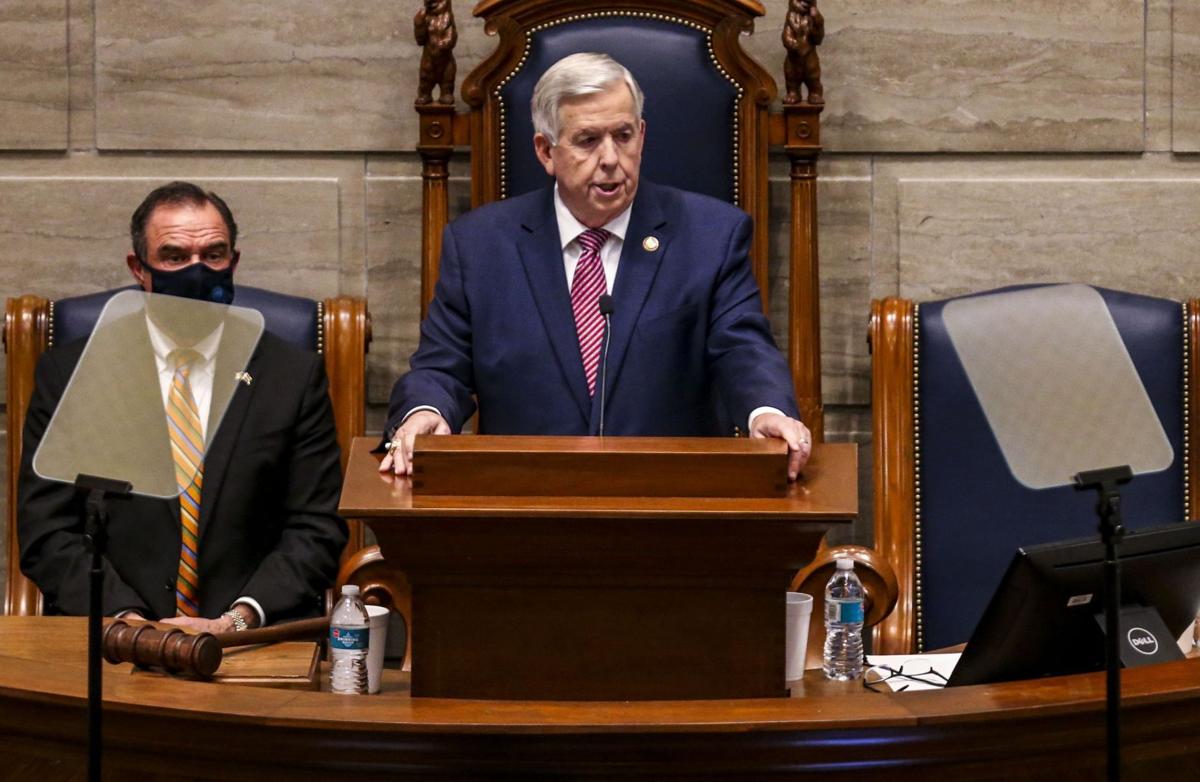 Gov. Mike Parson has never been accused of being a fancy talker. He’s a plain-speaker. He just lays things out there.

So I was quite surprised at the rhetorical flourish he gave us during his recent State of the State speech. The governor reminded us that Missouri has been through tough times before, and we have always come out not much worse than when we went in. A little worse maybe, but not enough to worry about. His point was, COVID-19 is not the first bad hand we’ve been dealt.

Before there was COVID, there was the Civil War, the Great Depression, women’s suffrage …

Here is the way the governor put it: “Missouri has seen some difficult days in the past 200 years, from the Civil War and the Great Depression, women’s suffrage and civil rights, to the COVID-19 crisis and countless other hardships.”

In fairness to the governor, somebody else must have written this, and I am convinced that whoever she is, she meant well. She did not mean to be comparing women’s suffrage and civil rights to the Great Depression and a pandemic. Her intention, surely, was to pay homage to the women — and the people of color — who have fought for their rights. She just did so a little awkwardly.

Plus, it was jarring to hear the words “women’s suffrage” come out of the governor’s mouth. He does not seem like a fellow who spends much time thinking about the suffragettes. Maybe if you asked him to name three historical figures he’d like to have dinner with, Susan Anthony would be at the top of his list. It just seems unlikely.

Still, his rhetorical flourish made me wonder. Just how bad did we have it in Missouri during the fight for women’s suffrage?

Was it just a matter of women walking around with signs? Or did they riot?

Surprisingly enough, the fight wasn’t so heated in Missouri. We were — get this — considered a rather progressive state. When Congress passed the 19th Amendment in 1919, Missouri was the 11th state to ratify it. The vote in the Missouri House was 125 to 4, and in the Senate, 29 to 3.

At the time of the governor’s speech, I happened to be reading a book about the struggle to ratify the 19th Amendment — “The Woman’s Hour” by Elaine Weiss. Missouri didn’t rate so much as a mention. It was mostly about the big fight in Tennessee.

According to Weiss, the suffrage movement had just about run out of steam in the summer of 1920, and Tennessee represented the movement’s best hope for the elusive 36th state. At that time, we had 48 states and the Suffs — as they were called — needed 36 states to hit the three-fourths requirement for ratification of a constitutional amendment.

Now, if the Tennessee governor wanted to talk about the Civil War, the Great Depression and women’s suffrage, he’d have some standing. It was a vicious battle, the kind I would suspect we’d have now in Jefferson City if women’s suffrage were to come up today. The Antis — as they’re called — were conservatives, mostly rural, who believed they were fighting to retain their way of life against the godless elites.

The Southern Women’s Rejection League was a powerful force. My favorite Anti group was Women Voters Against Suffrage.

Yes, that’s right. These were women voters who promised to vote against men who favored women voting. It turns out that even before the ratification of the 19th Amendment, some states allowed women to vote. For instance, the progressive men in the Missouri Legislature had agreed in 1919 to allow women to vote, but only in presidential elections. Local concerns would remain the domain of men.

Missouri gave the ladies half a loaf, so to speak, until the 19th Amendment was ratified.

We are not that state anymore. In fact, I’m quite sure that a solid majority of the Missourians who heard the governor’s recent speech did not think — like I did— that it was an awkwardly worded tribute to the Suffs. In most of Missourah, they heard the speech and thought: The governor is doing it again. He’s putting truth to power. First, the wrong team wins the Civil War, and then women get the vote. We have known some rough times.

I am not sure when Missouri changed, but we certainly had changed by the time Congress passed the Equal Rights Amendment in 1972. I was living in Arizona at the time and, although I was not following politics closely, I heard of the work of Phyllis Schlafly.

She led the national fight against ratification of the ERA.

She had a thing called the “Loaves Project.” Women opposing the ERA baked bread and gave these loaves to legislators to illustrate the traditional role of women and let those legislators see what they would be missing if they ratified the ERA.

That one resonated with me because, oddly enough, I was into baking bread in those days. Pumpernickel. It was a hippie thing to do.

Years later, I got to know Schlafly a little bit. She was a guest on Donnybrook, a panel show on Channel 9. I was, and still am, a regular panelist. One night, we were talking, arguing, about politics and I said something, and she looked at me, and said, “You don’t understand this, do you?” And I realized, I did not.

That is always a good thing to realize. It is liberating. We do not have to understand everything.

Maybe that is why I enjoy listening to the governor. He’s a plain speaker, but I hardly ever know what he’s really saying. I still like to think he was paying tribute to the Suffs.

McClellan: A valentine to a legacy

McClellan: Petty feuds are ill-suited for a pandemic

McClellan: A valentine to a legacy

Emily Hernandez of Sullivan says trusted friends of the family invited her to go with them to Washington, D.C.

McClellan: Petty feuds are ill-suited for a pandemic

A courthouse is inherently a place of conflict, and there is always tension between the judges and the prosecutor. It’s like two prison gangs — who controls the yard?

Women take part in the Golden Lane, a silent demonstration along Locust Street on June 14, 1916, the opening day of the Democratic National Convention in St. Louis. More than 2,000 women dressed in white and holding yellow parasols stood along Locust as delegates passed by on their way to the convention.