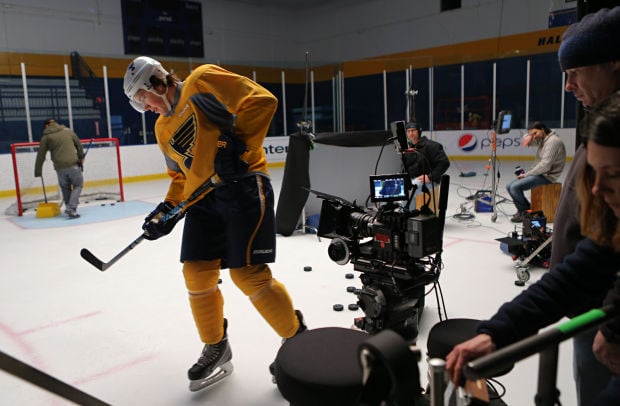 Blues right winger T.J. Oshie skates to his mark to begin filming of a national commercial starring him for Enterprise Rent-A-Car at the Ice Zone in Hazelwood on Wednesday, March 12, 2014. Since the Olympics Oshie's public profile has been on the rise. Photo By David Carson, dcarson@post-dispatch.com 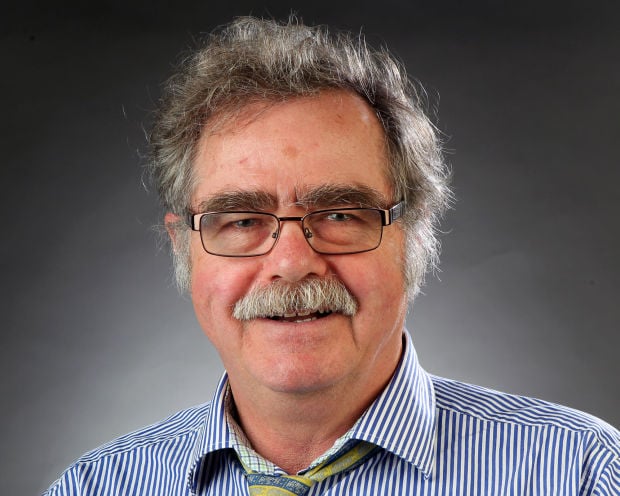 In the wake of the hockey team’s latest untimely demise in the playoffs, many St. Louisans are comparing the Blues to the Chicago Cubs. That’s becoming an apt comparison. I should know. I’m a fan of both teams.

As somebody with more than a little experience with unhappy endings, I think a Cubs fan can offer some advice to Blues fans.

First, you have to look for the positive.

Yes, the Blues lost the series to the Chicago Blackhawks, but which team had the coolest commercial? That would be the Blues. I’m talking about the Enterprise commercial in which forward T.J. Oshie played himself and goalie Ryan Miller played a young man from Enterprise who was delivering a car to Oshie. “Do you have a minute?” Oshie said, and when Miller said he did, Oshie asked him to stand in front of the net. Then Oshie fired a few pucks into the net and Miller watched them go in. It was realistic.

Actually, the guy was an actor. He didn’t have one of Miller’s key mannerisms. Whenever a puck gets by Miller, he looks up at the scoreboard and then shakes his head. You can almost read his mind: “Dang! That one almost hit me.”

Those pucks are coming in at 100 mph. It’s hard to get out of the way.

This reminds me of a second bit of advice. Embrace the Blame Game.

Too many Blues fans try to be analytical. “You can’t blame the goalie. It’s a team game. The real problem was the inability to finish on the power play. The defense has to clear the puck more efficiently. Blah, blah, blah.”

You don’t have to be right. You don’t even have to believe it yourself. Do you think Cubs fans really thought the Cubs lost the sixth game of the 2003 National League Championship Series because Steve Bartman tried to catch a foul ball? At the time, the Cubs were ahead 3-0 in the top of the eighth inning. There was one out and one runner on. Moises Alou went to the wall and tried to reach in and catch the ball but couldn’t get it. It is possible, but not likely, that he could have made the catch if Bartman had not reached for the ball himself.

So instead of a possible out, it was a strike. Big deal. The Cubs were still ahead 3-0.

Things fell apart. A walk, an error, a hit. Another hit.

But why dissect these things? It was easier to blame Bartman.

Just as it’s easy now to blame Miller. He was supposed to be a difference-maker when the team traded for him late in the season. He was a disappointment. He was awful in the playoffs. He set the tone by letting in three of the first seven shots against him. I love the way my colleague Joe Strauss expressed it: “The Blues thought they ordered Dom Perignon. ... They instead opened a crate of Miller Lite.”

See how easy it is?

I am not suggesting you ever blame a favorite player. I remember when Leon Durham let a ball go between his legs in a playoff game against San Diego. Cubs fans did not blame him. I forget whom we blamed. Probably an umpire.

Once you’ve got the Blame Game down, you can put this year behind you and start thinking of next season. You always need a phenom down on the farm.

I remember Ty Griffin. He was a can’t-miss prospect for the Cubs. He was a college star and then a star for the U.S. gold medal baseball team in the 1988 Olympics. Actually, he was first a star in the Little League World Series. He outshined two of his Little League teammates, Gary Sheffield and Derek Bell. The Cubs drafted him in the first round of the 1988 draft.

He never made it to the majors, but he played for the Thunder Bay Whiskey Jacks and the Grand Fork Varmints. Those are two jerseys to die for.

Whom do the Blues have like that? Because of Griffin, I am partial to the name Ty. So I am keeping my eye on Ty Rattie. He’s with the Blues’ American Hockey League affiliate. And, of course, there’s Jake Allen. He’s a goalie on the same team. He played well for the Blues last season, and he’s done well this season in the AHL. Next year, he’ll help replace Miller. That’s can’t-miss stuff.

I’m already excited for next year. I am firmly convinced the Blues will challenge for the Stanley Cup. The Cubs will be better, too. They have some phenoms coming up. Really.

But general manager doesn't seem to be turned off by Ryan Miller’s mediocre postseason.

Players don't disagree with Hitchcock's assessment that they lacked a 'killer instinct.'

St. Louis Blues' T.J. Oshie acted in a commercial for Enterprise Rent-A-Car on Wednesday, Mar. 12, 2014 at the Ice Zone in Hazelwood.

Blues right winger T.J. Oshie skates to his mark to begin filming of a national commercial starring him for Enterprise Rent-A-Car at the Ice Zone in Hazelwood on Wednesday, March 12, 2014. Since the Olympics Oshie's public profile has been on the rise. Photo By David Carson, dcarson@post-dispatch.com