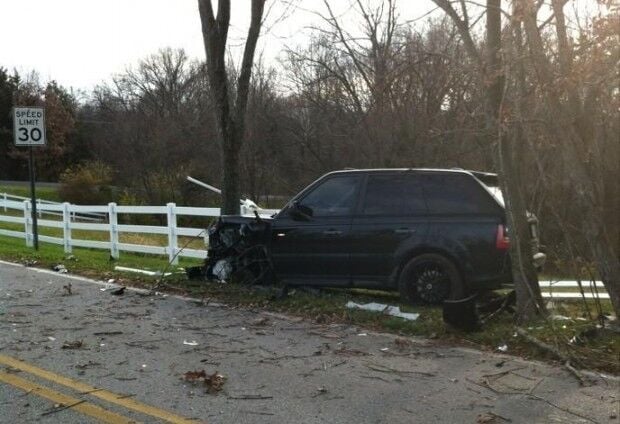 Cardinals player David Freese's Range Rover struck a tree in Wildwood on Thursday, Nov. 22, 2012, after he  swerved to avoid a deer, according to police. Photo via Twitter user @tullman24 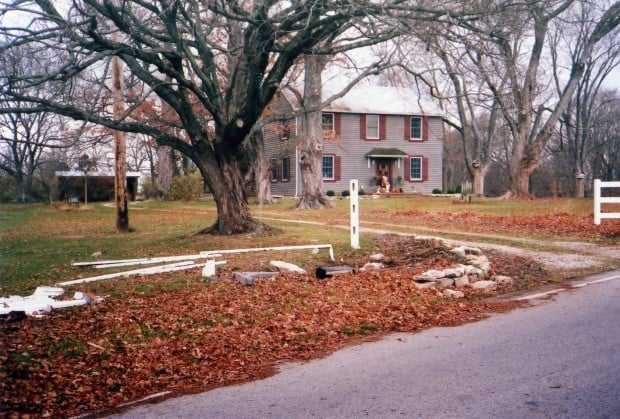 A view from Wild Horse Creek Road shows where David Freese drove his Range Rover through Charlie Duff's fence at his home in Wildwood on Thursday, Nov. 22, 2012. Photo courtesy of Charlie Duff 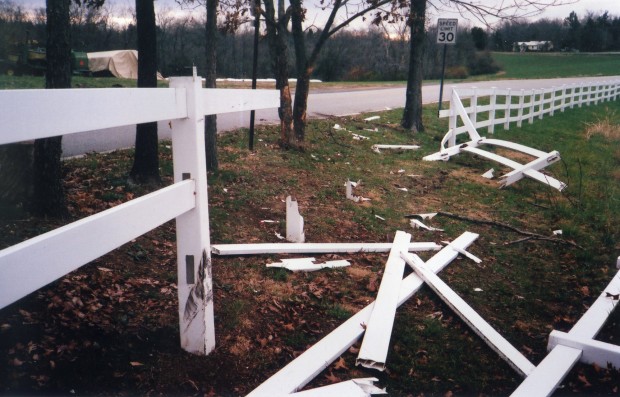 After traveling more than 300 feet through a field, David Freese smashed through a second section of the fence and hit two trees before coming to rest in front of a third tree. Photo courtesy of Charlie Duff

Charlie Duff was one of many readers unhappy with last Saturday’s story about World Series hero David Freese swerving to avoid a deer and hitting a tree in with his SUV on Thanksgiving afternoon.

But while most of the readers were unhappy with the story’s references to Freese’s past, which includes a history of drinking and driving, Duff was unhappy for a different reason. He doesn’t think there was a deer.

“That story makes no sense,” he told me.

The tree that Freese hit is on Duff’s property.

Perhaps you saw the photo of the SUV against the tree, and figured that Freese had turned abruptly and struck the tree.

The accident was a little more complicated. Freese was heading south on Wild Horse Creek Road in the far west suburb of Wildwood. It’s a winding road and the maximum speed limit is 30 mph.

Tire tracks show that the SUV left the road approximately 50 feet east of Duff’s mailbox. The vehicle smashed through the mailbox, crossed the driveway, jumped a small stone decorative wall, crashed through a fence and then proceeded into a field. It continued about 300 feet through the field, then veered back toward the road. It crashed back through the fence and hit two trees — exposing the roots of one of them — before coming to its final resting place against the third tree.

A woman from a passing car called 911, and the dispatcher notified the St. Louis County police’s Wildwood precinct of a “1050-J2,” which is an accident with possible injuries. The possibility of injuries mandates that more than one officer respond. In this instance, an officer and a supervisor responded. No tickets were issued.

Duff was not home, but a cyclist who witnessed the accident left a note on his door. Also, a neighbor from across the street heard the accident and rushed to the scene.

I spoke with both of them. The good news for Freese and his many fans is that both say they saw no sign of impairment. In that regard, they obviously agreed with the county police officers.

On the other hand, they were skeptical about the deer story.

The cyclist, Dave Fleming, was just turning onto Wild Horse Creek Road from Rieger Road. He said he had a view of the area at which Freese left the road. He said he saw no deer.

The neighbor, Jim Mathis, said he was working behind his shed when he heard the SUV crashing through the stone wall and the fence. He said he thought two cars had collided and he ran to the road. He then ran down toward the SUV.

By that time, Fleming had reached the SUV to provide help. He said he looked at the driver, and said, “I think I know you.” He said the driver responded, “You probably do.”

When Mathis reached the SUV, Freese was out of the car and seemed perfectly fine.

“I asked him what happened, and he said, ‘I don’t know.’ He didn’t say anything about a deer,” Mathis said.

By the way, Fleming and Mathis agree there are plenty of deer in the area. Fleming said he saw a large buck on Rieger Road earlier that afternoon. Mathis said he has hit more deer than he can remember. Fleming said he didn’t want to speculate about what happened, but Mathis had a theory.

“I think he was asleep,” Mathis said. He explained that there were no signs of braking in the tire tracks. “It’s like he had no reaction at all. If you’re a star athlete, you have the reflexes of a cat, don’t you?”

That’s an interesting theory. The night before the accident, Freese was at Guns ‘N Hoses, the boxing event that pits cops against firefighters and benefits BackStoppers. So maybe he was tired.

Duff, meanwile, is convinced Freese was speeding. Duff is 76 and retired, and he is tired of people speeding up and down Wild Horse Creek Road.

Randy Vaughn with the county police told me that it’s often difficult to determine exact speed and issue a ticket in a one-car accident. I called the agency that represents Freese, and they didn’t have a comment.

The sportswriters tell me that Freese is one of the good guys. He’s generous with his time and accessible to the fans. There are probably plenty of people who would be thrilled to have Freese drop in unexpectedly, but Duff is not one of them.

He is definitely not buying the deer story.

Sports talk-show co-host and former Cardinals outfielder is dealing with brain cancer but vows: 'I'm not going to let this beat me.'

Leave it to Bill McClellan, an admitted Cubs fan, to dig up dirt on a Cardinals player ("David Freese’s Thanksgiving deer story finds a doubte…

Some personal information has been redacted from this report by the St. Louis Post-Dispatch.

Cardinals player David Freese's Range Rover struck a tree in Wildwood on Thursday, Nov. 22, 2012, after he  swerved to avoid a deer, according to police. Photo via Twitter user @tullman24

A view from Wild Horse Creek Road shows where David Freese drove his Range Rover through Charlie Duff's fence at his home in Wildwood on Thursday, Nov. 22, 2012. Photo courtesy of Charlie Duff

After traveling more than 300 feet through a field, David Freese smashed through a second section of the fence and hit two trees before coming to rest in front of a third tree. Photo courtesy of Charlie Duff