We see this error a lot, and you might chalk it up to the good ol' PC.

When you shorten 2012 to just '12, use an apostrophe. That versatile punctuation mark (a robust one being correctly used is pictured at left) fills in for the missing numbers, just like it fills in for missing letters in a contraction. Use it for decades, too! It can do it all, and here's an example: Don't forget that the '80s was the height of fashion and music.

On the other hand, a single opening quotation mark is limited in its abilities. It looks like an apostrophe turned upside down and flipped, or kind of like a tadpole being held by its slimy tail. Use it to introduce quoted material within a quote. Example: "I love it when the Bee Gees sing 'How Can You Mend a Broken Heart.' " Or:"I told those kids, 'Get off my lawn,' but they just laughed."

The problem with a lot of software is the dreaded "smart quotes." When you type a phrase such as "the '80s," you automatically get an opening quotation mark in front of that 8, not the correct apostrophe. Here at the P-D, you hit alt+shift+right bracket or hunt through a panel of special characters to get an apostrophe before the 8.

One downside to web pages is that many, such as ours, don't show the difference between an apostrophe and quotation mark. It displays as just a straight up-and-down mark. But it matters in the newspaper, or when you make a giant sign.

Click any year to explore the Cardinals' World Series that season.

Ring photos (except 2011) from the collection of Jerry P. McNeal, taken by Rudie Ershen. 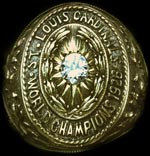 The Cardinals defeat the Yankees four games to three to claim their first World Series. Grover Cleveland Alexander wins the second and sixth games, then comes on to save the seventh. 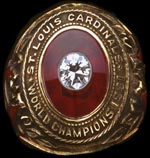 Pepper Martin, the Wild Horse of the Osage, paces the Cards by stealing five bases, collecting 12 hits and batting .500 as the Cards down the Philadelphia Athletics four games to two.

The "Gas House Gang" wins the National League pennant on the final day of the season, then defeats Detroit in a seven-game World Series. Dizzy and Paul Dean each win two games. 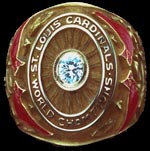 After losing the first game of the Series to the Yankees, the Cards storm back to win four straight. Third baseman Whitey Kurowski hits a two-run, ninth-inning homer in the clincher.

In a pitching-dominated, all-St. Louis World Series, the Cards down the Browns four games to two. The teams combine to strike out a six-game Series' record 92 batters. 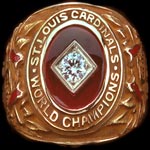 Enos Slaughter's "mad dash" from first to home on a double to left-center by Harry Walker is the winning run in a Game 7 win over the Red Sox. 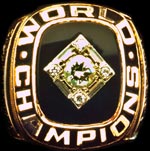 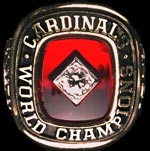 The "Whitey-ball" Cardinals rally from a 3-2 deficit to beat the Brewers in seven games, bringing a World Series championship back to St. Louis for the first time in 15 years. 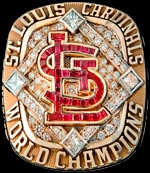 With a playoff berth not secured until the regular season's final day, the Cardinals storm through the postseason and beat Detroit four games to one to capture their 10th World Series. 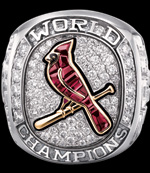 The Cardinals overcome a 10½-game deficit in the final month to win the Wild Card on the season's final day. That success carries over to the postseason, which ends with a Game 7 World Series' win over Texas.

Frank Reust is letters editor for the St. Louis Post-Dispatch.