Fans of KMOV (Channel 4) reporter Ashli Lincoln have this week to enjoy her work, for next week she will ankle our local station and return home to Atlanta.

With a joyous heart, I’m excited to announce that this Full-Circle “Moment” has finally manifested itself.

One week from today, I’m coming HOME to serve YOU Atlanta Georgia! As the New Investigative Journalist at WSB-TV! #dreamjob pic.twitter.com/a7m24mlky2

"With a joyous heart, I am excited to announce … (that) one week from today, I'm coming HOME to serve you Atlanta Georgia! …"

Lincoln came to KMOV in 2018 after reporting stints in Georgia and Oklahoma.

And speaking of Lincoln and social media, the reporter actually became the star of a GIF in 2019.

It started with Lincoln trying to finish a live weather update outside the Enterprise Center when an intruder crashed the scene. Lincoln dispatched him with a sweep of her arm and without missing a beat.

Then another Twitter user turned it into an animated GIF. It now is in Giphy, a database of short looping GIFs that allows people to forever use Lincoln's cool dispatch of the crasher. (Remember: #BOYBYE)

Lincoln's reaction on Twitter to the whole social media storm at the time?

"Lawd the internet has officially turned me into a GIF." 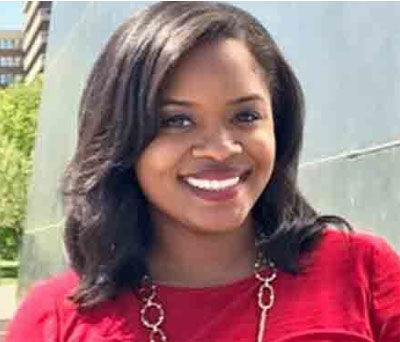