A state appeals court judge earlier this week affirmed a ruling that Mark Kummer had not lived in St. Louis long enough to be included on the ballot of a special election Sept. 13.

That means the race for president of the Board of Aldermen will feature just two candidates: aldermen Jack Coatar and Megan Ellyia Green.

With just two candidates on this special, nonpartisan ballot, both candidates will move forward to the Nov. 8 election. The winner will replace acting Aldermanic President Joe Vollmer. Vollmer stepped in after Lewis Reed, under a federal indictment for corruption, resigned in June.

Sure, it can be argued that simple either/or choices between two candidates best serve the purpose of good government.

But it sure was a hard blow to past practices.

And that’s why Kummer’s fight to get on the ballot started tongues wagging about what forces placed Kummer into the race to take votes from Coatar.

This is by no means unheard of in this town. As political scientist Lana Stein wrote in her 2002 book, “St. Louis Politics: The Triumph of Tradition,” our fair burg has had a “long tradition of candidates filing for the sole purpose of drawing votes from a front-runner.”

At this point, some may ask why not Kummer siphoning votes away from Green?

Well, as the scuttlebutt circuit of local politics quickly pointed out, Kummer and Coatar are both white males. This would not have been the first, nor will it be the last, time a spoiler candidate was being used to split a vote along racial or gender lines.

And the possibility of Kummer being a spoiler was not completely lost on Coatar. Don’t forget that it was he, and not Green, who filed suit to get Kummer off the ballot.

But the theory that Kummer was in the race to spoil things for Coatar had more going for it than just race and gender.

Let’s take a look at this from a strict grassy-knoll point of view: “Jack/Mark; Coatar/Kummer.”

Both men have four-letter first names ending in “k” and two-syllable last names that begin and end with the same phonetic sounds.

Granted, I know this all sounds silly to those who make healthy mental choices and avoid deep dives into politics.

But then again, those folks probably don’t know about Clara Jo Roddy and the St. Louis “name game.”

For this balloting blast from the past, let’s turn our conspiracy clocks back to 1982.

Challenging him for the post was then-newcomer, Freeman R. Bosley Jr., who would in 1993 become the city’s first Black mayor.

Any handicapper calling this race 40 years ago would have been smart to pick Roddy. He had been circuit clerk for 14 years and an alderman for 15 years before that. Moreover, he was a force in the city’s Democratic Central Committee and controlled as many patronage jobs as any other St. Louis politician.

But then along came Clara Jo.

Unknown to virtually everybody at the time, she first filed for the office as “C. ‘Jo’ Roddy,” quite the mirror of the incumbent’s listing as Joseph “Joe” Roddy.

To make the maneuver all the more suspicious, Clara Roddy did not make any public appearances and refused to be interviewed by the press.

Attorneys for the incumbent Roddy did manage to get the courts to require her to be listed as “Clara J. Roddy,” but the confusion had already been created.

When the final votes were tallied, Clara J. Roddy managed to get 2,245 votes — and Bosley beat Joe Roddy by less than 1,000 votes.

And because the spoiler candidate has been such a tradition in St. Louis politics, no one from the incumbent Roddy camp even complained very much.

As Bill McClellan wrote a few years later about politics in St. Louis: “When the system is really clicking, the ballot looks like a phone book.”

But Kummer himself did the most to kill the conspiracy angle in this recent race. After he was booted from the ballot, he endorsed Coatar for aldermanic president. 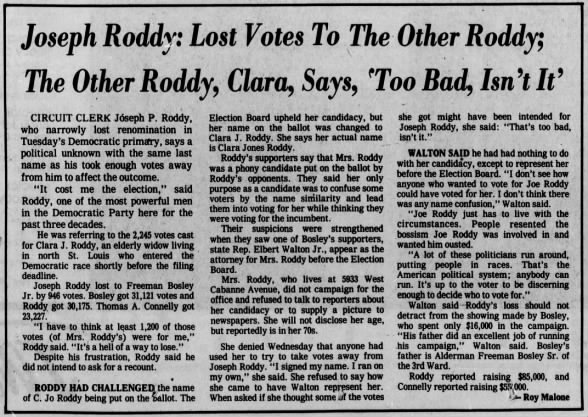