Nature fans, rejoice: STL’s “Blue Rhino” has been returned to the wild — thanks to the backing of a benevolent barkeep.

Edwards bought the statue in 2018, for $700, when the golf course closed and items were auctioned off to make way for a housing development along Heege Road in south St. Louis County.

“So I was there to buy some stuff for a mini-golf course I’m planning,” which now is being built across from his Moonrise Hotel, Edwards said Monday.

“And when I bought it, the owners of the new course came up to me and asked that if they ever managed to reopen Tower Tee, would I be willing to sell it back to them,” he said.

Edwards promised he would and then housed the rhino at his tavern, Blueberry Hill, for more than three years. It had ample company, as Edwards’ landmark Loop bar is known for its collections of television show and other pop-culture items.

And then on Friday, Edwards proved good on his word.

He loaded the goofy gargantuan gewgaw into his 1964 Chevy Impala convertible, motored over to the new course, which opened earlier this year, and presented it to co-owner Mike Shamia.

“They bought it back for what I paid for it,” Edwards said.

Although smaller than the original, the new course at 6727 Heege Road is located roughly in the same area as the old course.

“I really admire (the new owners’) idealism in bringing Tower Tee back, especially because of what that site meant to South County,” Edwards said.

“And I’m happy that the rhino is back to being free-range and out in the open air.”

Joe Edwards poses with Tower Tee golf course's "Blue Rhino." Edwards has returned the statue, which he bought in 2018 for $700, to the course. 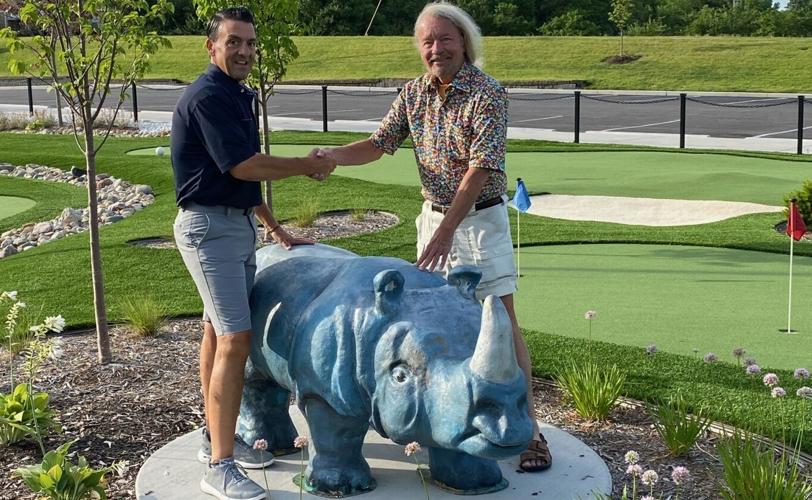 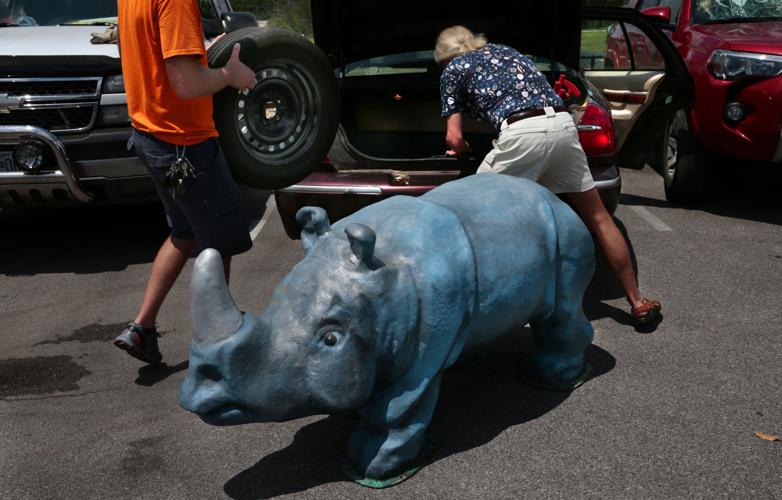 Joe Edwards of the Delmar Loop fame, tries to clear room in his car's trunk for a fiberglass rhinoceros after buying him for $700 at auction from the Tower Tee miniature golf course on Monday, July 9, 2018. Photo by Robert Cohen, rcohen@post-dispatch.com