Portland Place, where couple pointed guns at protesters, has long been home to wealthy St. Louisans
0 comments
Share this
{{featured_button_text}}
1 of 2 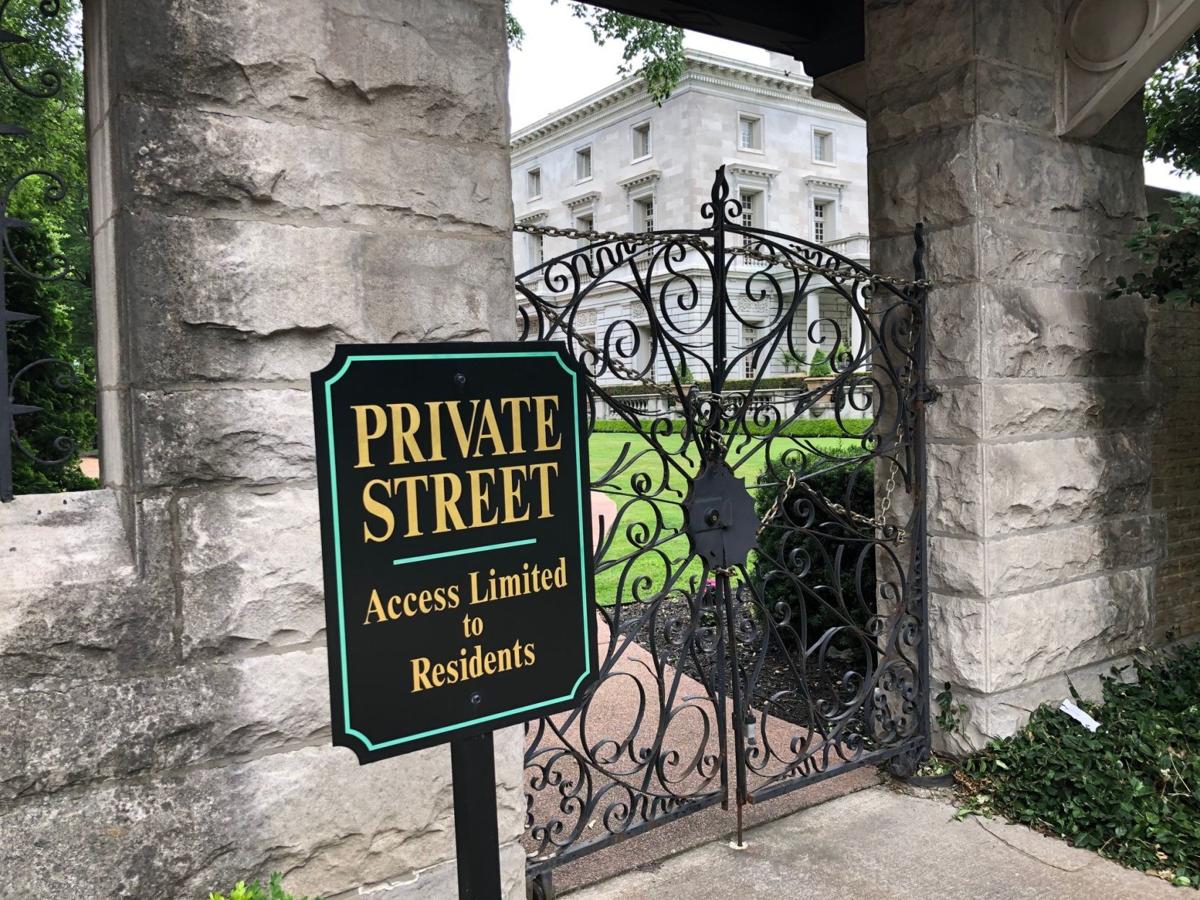 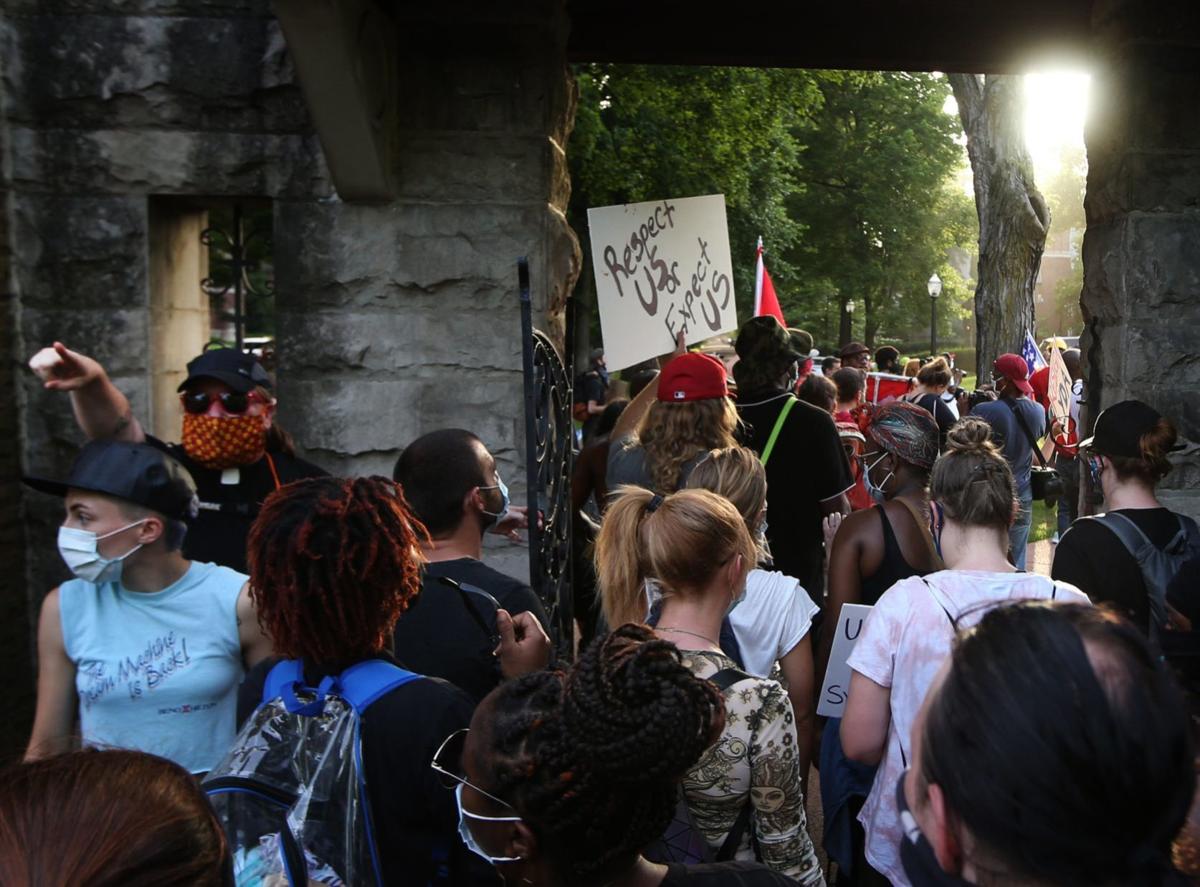 A protester directs the crowd to stop filing through a pedestrian gate leading to Portland Place after the first group who walked through encountered a couple pointing guns on Sunday, June 28, 2020, in the Central West End neighborhood of St. Louis. The protesters called for Mayor Lyda Krewson's resignation for releasing the names and addresses of residents who suggested defunding the police department. Photo by Laurie Skrivan, lskrivan@post-dispatch.com

The protesters, on their way to the home of Mayor Lyda Krewson, cut through Portland to get to the mayor’s nearby Lake Avenue address.

Portland homeowners Mark T. and Patricia N. McCloskey, have been seen on video around the world, telling protesters that they were trespassing on private property and had to leave.

St. Louis City Counselor Julian K. Bush affirmed that Portland, as well as several other streets in the West End, are indeed private.

“The city has no right-of-way onto those streets,” he said.

Bush said homeowners are within their rights to exclude people from either driving their cars or walking through those areas.

While Portland Place — and Westmoreland Place, Portland’s twin one block to the south — may be the most storied private streets in the area, they were by no means the first.

Historians note that the advent of private streets in St. Louis began before the Civil War.

In 1851, Lucas Place was created near downtown and is commemorated by the lone remaining structure from that development, the Campbell House Museum at 1508 Locust Street.

After the Civil War ended, other private developments cropped up, such as Benton Place near Lafayette Square; and Vandeventer Place, where the John Cochran Veterans Hospital now stands north of downtown.

Both of those places were laid out by surveyor Julius Pitzman, who championed the idea to develop residences along parklike streets that would be maintained by the residents, where traffic could be restricted.

And in the days before zoning regulations, the types of structures built in the private places could be controlled, said NiNi Harris, a local historian and author.

“The city was growing so fast; the population almost doubled between 1860 and 1870,” she said.

By the late 1870s, many of the city’s most influential residents were living in the mansions on Vandeventer and Benton places.

With the rapid population growth, wealthier St. Louisans found their residential neighborhoods being surrounded by commercial and industrial businesses, “so they created these private places,” Harris said.

By the late 1880s, the city was expanding farther west and plans had been announced to hold a World’s Fair on the grounds of the new Forest Park. This led Pitzman to create new private places, just north of Lindell Boulevard and the park.

Portland and Westmoreland places were laid out in 1888, and the first homes opened in 1890. The streets are now listed on the National Register of Historic Places.

In his book “Westmoreland and Portland Places,” published in 1988 to celebrate the centennial of the two streets, Julius Hunter, former KMOV-TV (Channel 4) anchorman, said the city’s power structure was so centered on these two streets that they were uniquely self-sufficient.

Every element required to purchase and equip a new residence — from a bank loan to bricks, stone and glass to electricity, gas and appliances — could be obtained from a company headed by a neighbor, Hunter wrote.

Some of St. Louis’ most heralded family names have lived on one of the two streets. One of the more famous houses on Portland is the Faust House, built by August A. Busch Sr. as a wedding gift to his daughter and her new husband, restaurateur Tony Faust.

Also, some of the top architects built the homes that eventually ended up on Pitzman’s plots, including Theodore Link, best known for designing St. Louis Union Station.

Link designed two homes on Portland and also the gates on both Portland and Westmoreland places, according to the Landmarks Association of St. Louis.

Harris said the concept of private places moved into St. Louis County in the early 1900s, with gated developments being established in a number of municipalities, including Clayton, Ladue, Richmond Heights and University City.

Watch now: About that broken gate at Portland Place

Reporter Jeremy Kohler takes a walk and takes a closer look at the gate.

A protester directs the crowd to stop filing through a pedestrian gate leading to Portland Place after the first group who walked through encountered a couple pointing guns on Sunday, June 28, 2020, in the Central West End neighborhood of St. Louis. The protesters called for Mayor Lyda Krewson's resignation for releasing the names and addresses of residents who suggested defunding the police department. Photo by Laurie Skrivan, lskrivan@post-dispatch.com