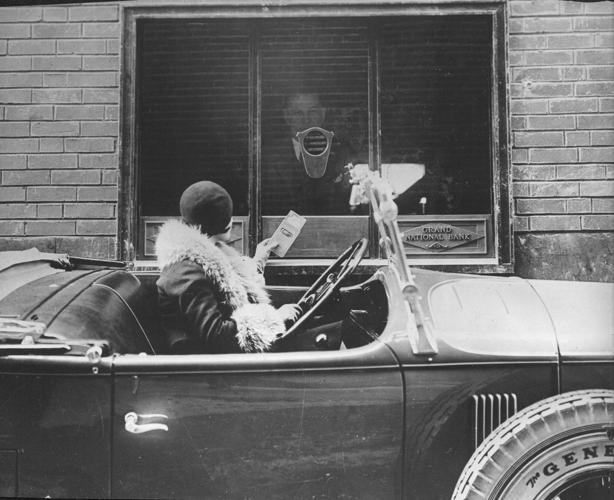 The drive-thru window in June 1930 at the Grand National Bank, at the rear of the Continental Life Building at Grand Boulevard and Olive Street in Midtown St. Louis. It is believed to be the first drive-thru service in the U.S. 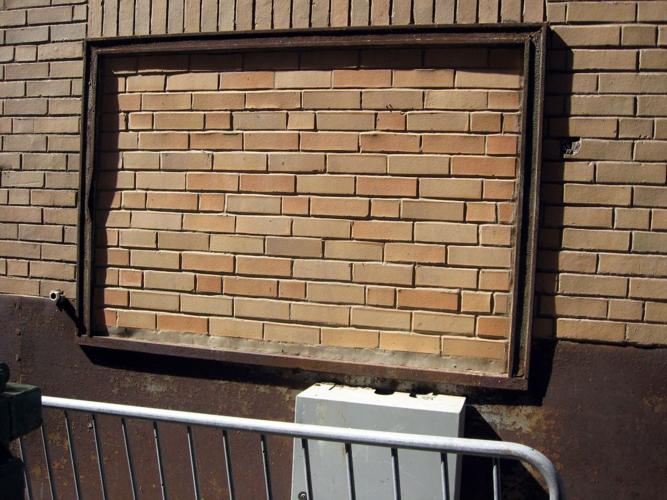 Could this — in the alley just north of the Continental Building in midtown St. Louis — be the last remains of the first drive-thru window in the U.S.? 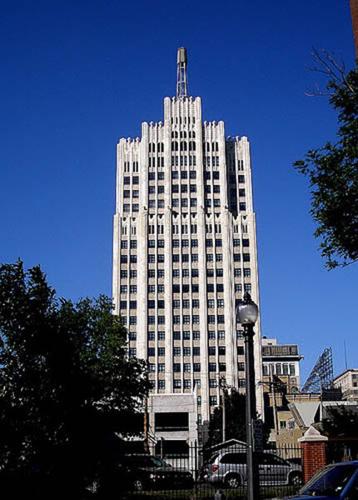 The Grand Center area of midtown St. Louis has been famous over the years as an entertainment district, our “Great White Way.”

In 1930, no fewer than seven theaters graced the five-block strip of Grand Boulevard between Olive Street and Delmar Boulevard.

Adding color to the district were several nightclubs, Garavelli’s late-night restaurant and the pool shark-infested Arrata’s billiards hall. Indeed, the intersection of Grand & Olive was the nexus of nightlife.

So it might be hard to imagine that the most important contribution possibly to come out of that glare can still be found down a dark alley:

From most indications, including a story in Popular Mechanics in 1930 (“Autoists do banking from their cars”), the first use of drive-thru service to help customers transact business was in an alley that still exists in the rear (north) of the Continental Building. What appears to be the bricked-up site of the old Grand National bank drive-up window is still visible in the alley.

As the story goes, the drive-thru was the brainchild of Edmund M. Mays, an up-and-coming businessman from Arkansas who was looking to achieve tycoon status in St. Louis.

Mays had big ideas back in the late 1920s, as could a man who had gained ownership of both the Continental Life Insurance Co. and the Grand National Bank.

In the book “The Queen of Lace: Story of the Continental Life Building,” Mays was described as “neither compromising nor pragmatic.” It goes on to say he desired a headquarters to “consolidate his holdings and create the Mays image of empire.”

So Mays hired famed architect William B. Ittner, who designed the Continental Life Building in the emerging Art Deco style. The 22-story landmark opened in June 1930.

According to Built St. Louis, an architecture preservation website, the bank occupied the main floor and mezzanine. The website notes that the drive-thru was a trumpeted feature.

An article in Union Electric magazine said that “... an electrical push button will be provided in the alley in the rear of the bank. The hurrying business man or the late matinee attendant may drive up to the rear of the bank, press the electric button, which raises a steel curtain and be face to face with a bank teller ... (so) that the busy customer may transact his business without parking or leaving his machine ...”

The bank, and Mays empire, did not fare well through the Great Depression. It closed its doors in 1933, taking with it what may have been the first-ever drive-thru service.

One of the seven theaters, the Grand Central, closed before the bank. Of the six others, the Fox, St. Louis (Powell Hall) and Sun (Lyn, World and Liberty) are still standing. Loew’s Mid City (Princess, Rialto and Shubert) was open into the 1970s, while the Empress and Missouri theaters closed their doors in the 1950s.

Joe Holleman takes a look at what makes us St. Louis.

The drive-thru window in June 1930 at the Grand National Bank, at the rear of the Continental Life Building at Grand Boulevard and Olive Street in Midtown St. Louis. It is believed to be the first drive-thru service in the U.S.

Could this — in the alley just north of the Continental Building in midtown St. Louis — be the last remains of the first drive-thru window in the U.S.?