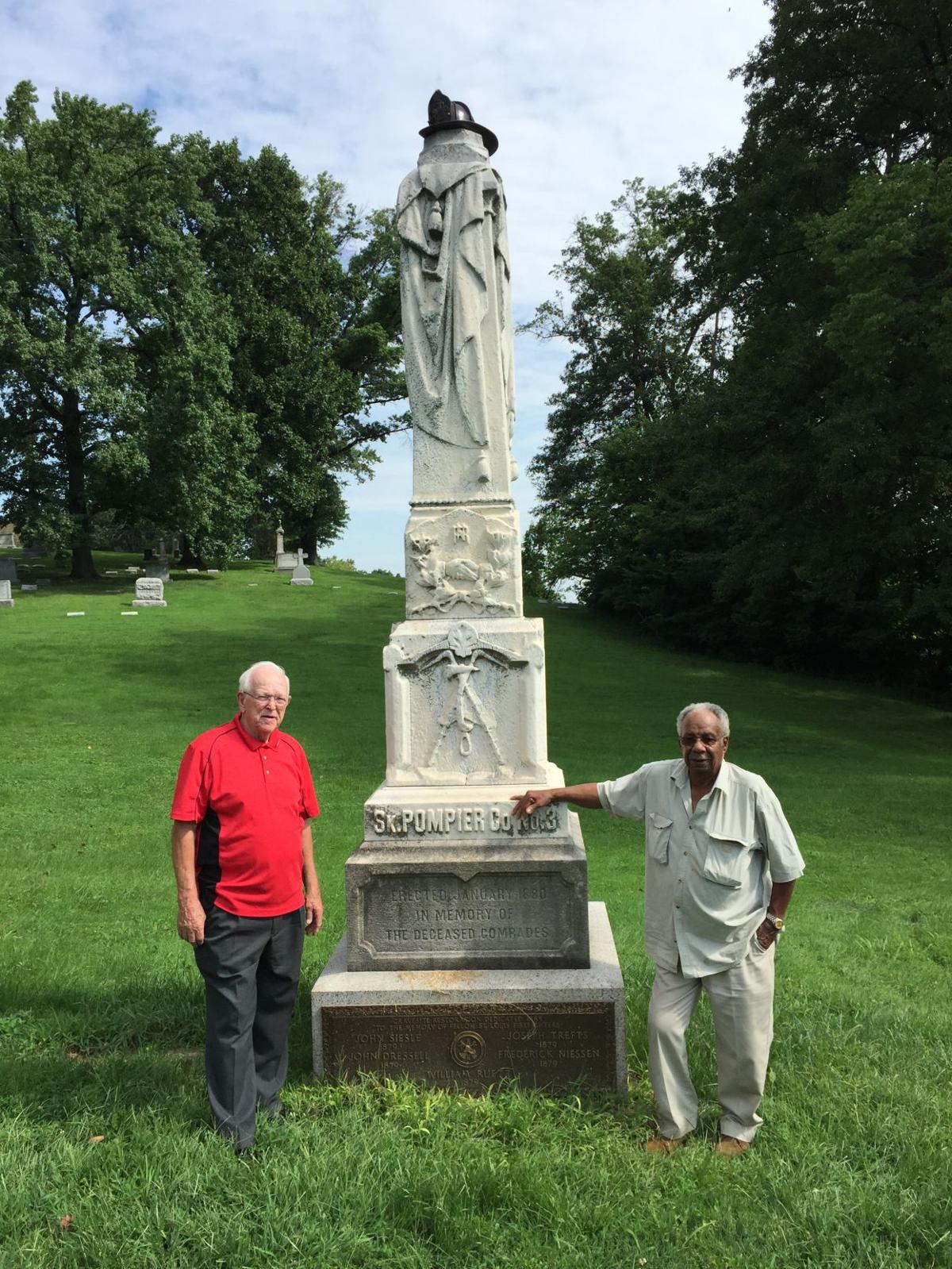 Andy Tracy (left) and Stanley Newsome, both former St. Louis firefighters, stand next to the Fireman's Fund monument at Bellefontaine Cemetery during  a trial fitting of a new helmet on top. No date has been set for the official reattachment. Courtesy of Tim Ogle 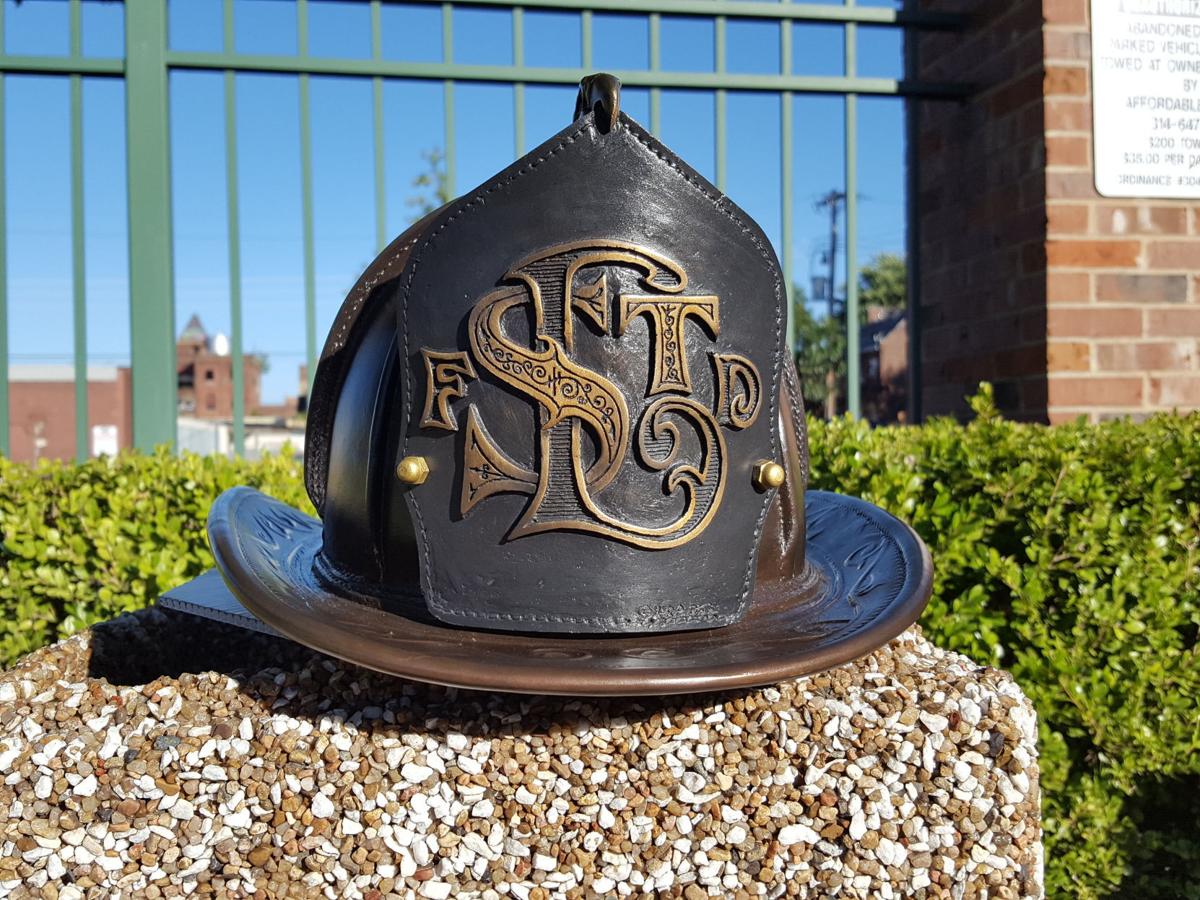 The bronze helmet by sculptor Robert Daus that soon will be fitted to a Fireman's Fund monument at Bellefontaine Cemetery. Photo by Joe Holleman of the Post-Dispatch 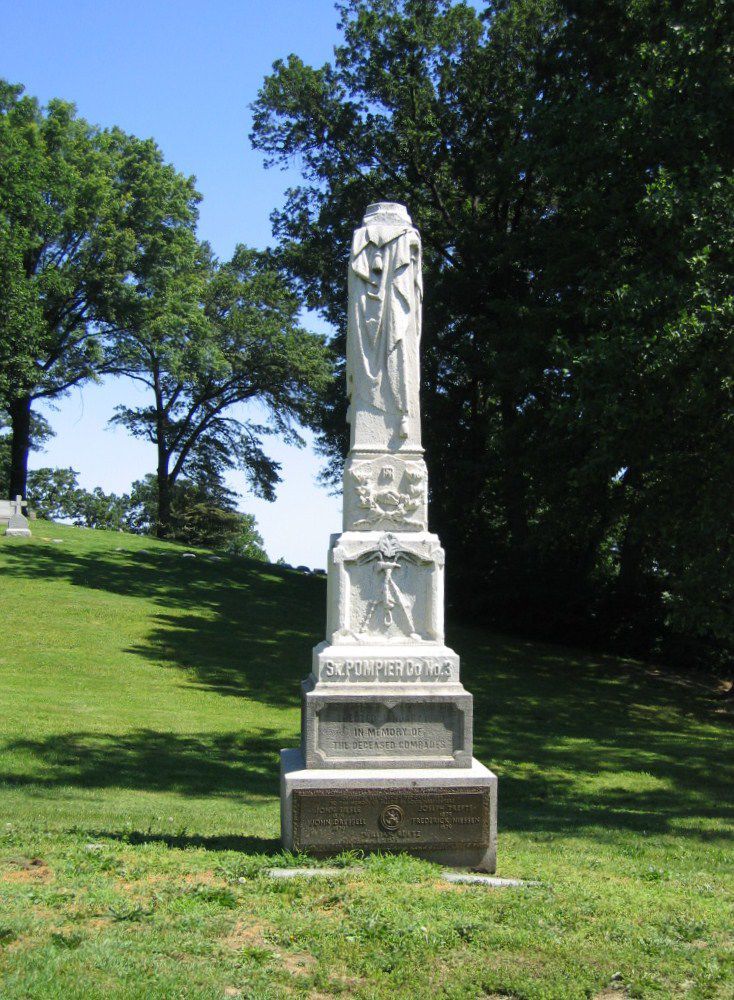 Putting a hat on tends to add style, and it will certainly help a firefighters’ monument at Bellefontaine Cemetery that has gone bareheaded for a century or so.

And two former St. Louis firefighters — an unlikely pair of similar men who slowly became fast friends — are part of a small group set on placing a lid back on the pillar.

The monument stands on lot No. 1922, an elliptical plot roughly 95 feet by 100 feet in the northeast quadrant of the cemetery, a prominent location when the main entrance was off North Broadway Avenue.

One of the burials is John W. Bame, the fourth chief engineer of the St. Louis fire department, from 1867 to 1869. “He’s pretty much dead-center in the lot,” Fuller noted.

Fuller explained that in the early decades of the department, the position of fire chief was actually known as “chief engineer.” He also added that the first three St. Louis chiefs are buried elsewhere at Bellefontaine.

The plot does not belong to the fire department, but to the St. Louis Firemen’s Fund Association, a benevolent society that pays small benefits to disabled and retired firefighters and maintains the plot.

The 15-foot marble monument, as best as can be determined, was erected in the early 1870s. The helmet disappeared around 1915, and “was removed, destroyed, saved, no one really knows,” Fuller said.

“But anyone who looks at it can see that it looks incomplete,” he said.

And that’s where the retired guys come in.

“We’ve been talking about this for years,” retired firefighter Andy Tracy said. “It just doesn’t look right without it.”

Another player in the helmet push is former deputy chief Stanley Newsome, who already has reserved his burial plot on the fund’s lot. He also admits that his and Tracy’s efforts were mostly verbal until retired firefighter Tim Ogle came along.

Both said Ogle pushed the project and helped get local sculptor and former firefighter Robert Daus to produce a replacement — a solid brass helmet weighing a good 50 pounds and taking a firm two-handed grip to carry.

Ogle said the group already has had a dry-fitting of the helmet (it fits) and Fuller has said the attachment method (epoxy) is not complicated or time-consuming.

All that awaits now, Tracy said, is coordinating a time for a ceremony with the fire department.

Ogle also noted that one of the pleasures of working on the project has been spending time with Newsome and Tracy, who have grown to become close friends.

That’s something Newsome, as reserved as Tracy is garrulous, admits would not have happened when they were younger.

“My guess is if we’d have known each other in the early days, we’d have probably fought,” Newsome said with a chuckle.

Both men are 78 years old, grew up on the city’s north side, started with the fire department in 1962, and retired in 2000 after 38 years of service — all facts that were agreed upon with minimal quibbling and correcting.

Tracy once was head of the city firefighters’ union Local 73, and Newsome is one of the founders of the Firefighters Institute for Racial Equality.

During contentious times in the 1960s and 1970s, black firefighters left the union and used FIRE as their main support group.

“But we first worked together back in ’68 and ’69, our organizations did, when we were looking to get pay parity with city police,” Tracy said.

The two men grew apart after that — “some kind of falling out, not sure why,” Tracy said — and Newsome climbed the administrative ladder to deputy chief and Tracy remained in the rank-and-file.

“But now,” Ogle said, “they’re like Jack Nicholson and Morgan Freeman in ‘The Bucket List.’ They do everything together.”

And “everything” includes offering critiques of the server responsible for dishing out the soup at Hodak’s, where they meet to eat every Tuesday.

“They spooned it right,” Tracy said, digging into his bowl of bean soup.

“From the bottom,” Newsome nodded, “to get the good stuff.”

Helmet was missing for a century from Bellefontaine Cemetery

Andy Tracy (left) and Stanley Newsome, both former St. Louis firefighters, stand next to the Fireman's Fund monument at Bellefontaine Cemetery during  a trial fitting of a new helmet on top. No date has been set for the official reattachment. Courtesy of Tim Ogle

The bronze helmet by sculptor Robert Daus that soon will be fitted to a Fireman's Fund monument at Bellefontaine Cemetery. Photo by Joe Holleman of the Post-Dispatch