Nate Marschalk and Elizabeth Valerio are vacationing in an exotic locale. The weather is lovely, the people are friendly and the hotel is boutique-cute.

And they can’t wait to get the hell out of there.

The St. Louis couple is just one of more than 1,300 U.S. citizens trapped in Peru by a 15-day quarantine imposed by the Peruvian government to combat the COVID-19 outbreak.

“It’s like being held in a very well-appointed prison,” Marschalk said Thursday from the Aranwa Hotel in Cusco.

“This whole situation doesn’t seem real,” Valerio said. “It’s so strange that I wake up every morning and have to remind myself this is really happening.”

Most of all they miss their 2-year-old daughter, Josephine, who is splitting time with her grandparents: John and Debbie Marschalk, and Tony and Ann Valerio.

“She’s having a blast with them and we FaceTime with her three, four times a day,” Valerio said. “We knew we’d be away from her for a week, but this … ?”

“This” began in November when Valerio, principal at KIPP Triumph Academy, and Marschalk, a training specialist for Edward Jones, bought a vacation package during Black Friday sales.

They arrived in Lima, Peru, on March 13 — the start of what was to be a weeklong trip to see Machu Picchu and other ancient Incan sites.

They immediately headed to Cusco, the main city for Incan-site tourists. They stayed until Sunday and then set off for Aguas Calientes, a town close to Machu Picchu.

They arrived Sunday night, just in time to hear that the Peruvian government was declaring a state of emergency.

“Then Monday morning, they said Machu Picchu was closed and everyone had to go to the train station and leave,” Valerio said.

So they returned to Cusco, by train and bus, for what originally was going to be a two-night stay at Hotel Aranwa.

“It’s really nice, it was our splurge on the trip,” Valerio said. “But now we’re here until this is over, and we really can’t afford that.”

Their days in Peru are understandably predictable, with one highlight being breakfast.

“Breakfast is included with our room, so basically we stuff ourselves,” Marschalk said.

But even a nice hotel becomes claustrophobic when you know you can’t leave.

“The only trip we’re allowed to make is to a small grocery store down the street,” Valerio said. “We look forward to that, walking down there and taking the long way every time, just walk up and down a side street to get some exercise.”

Peruvian police have a heavy presence in the area, strictly enforcing the limits on people moving.

“Don’t get me wrong, they’re very polite. But if you leave the hotel, you better have your passport and you have to stay inside a certain area,” she said.

After breakfast, they spend time either in their room or in the hotel’s courtyard chatting with a Michigan couple. Temperatures are in the 50s with sunshine. “The weather’s quite nice,” Marschalk said.

Another time-killing exercise has been to write emails to family and friends, and elected officials.

“We heard back from Josh Hawley’s office. Not sure there’s anything they can really do for us, but it was nice to hear from them,” she said.

Good thing they decided to take their laptops.

“We were thinking of leaving them at home,” she said. “But we decided to take them for the long flights, and now we’re so glad we did.”

The laptops gave them access to a spreadsheet, posted on social media by a U.S. tourist elsewhere in Peru, which shows there are about 1,350 Americans now quarantined in Peru, Valerio said.

They also spend a lot of time trying to arrange a flight home.

“The quarantine expires on March 31, and we managed (a few days ago) to get a flight out on April 1,” she said. “But now we just found out it’s been canceled.”

But they know it could be worse, as with a German couple they met.

“They’re hikers,” Marschalk said, “and they’re spending the quarantine in a hostel — with 24 other people.” 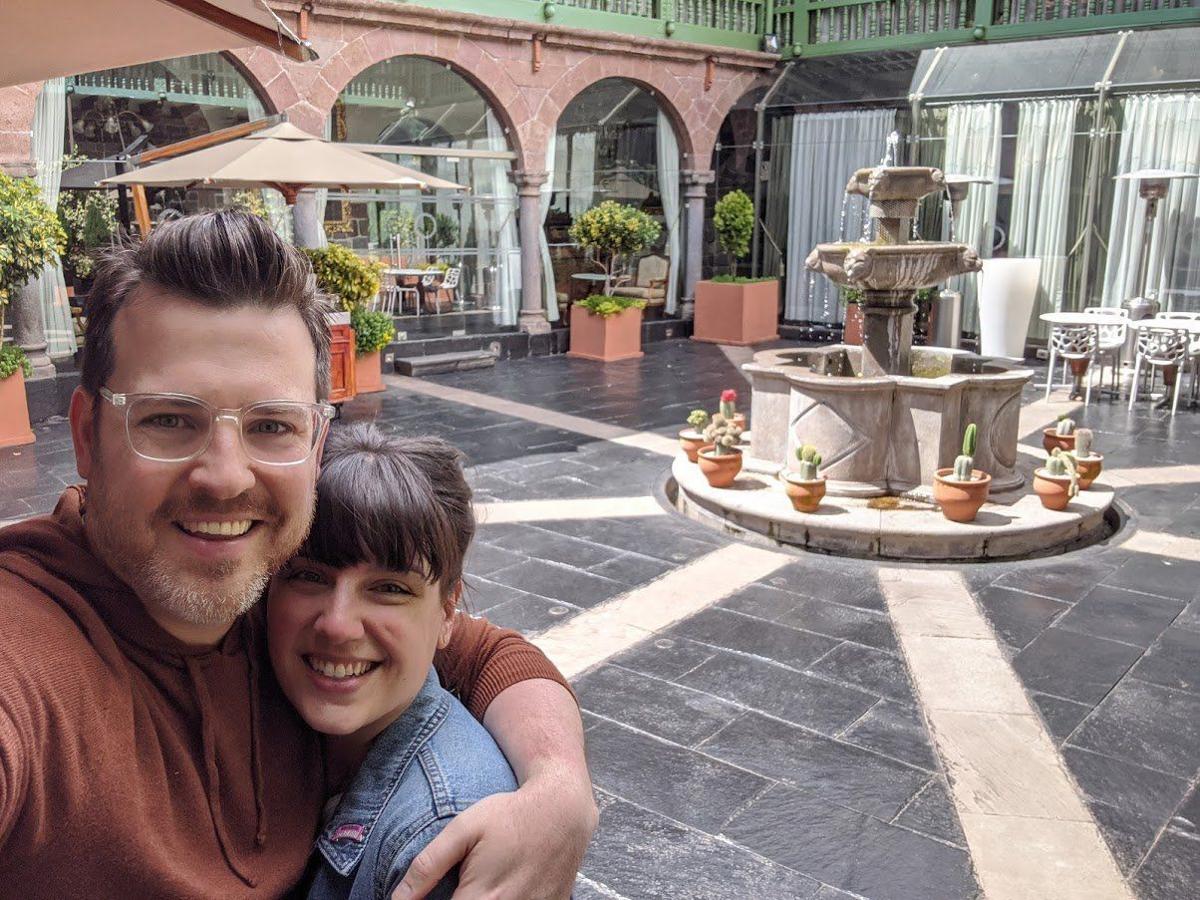 Nate Marschalk and Elizabeth Valerio, quarantined at their hotel in Cusco, Peru. (Photo by Nathaniel Marschalk) 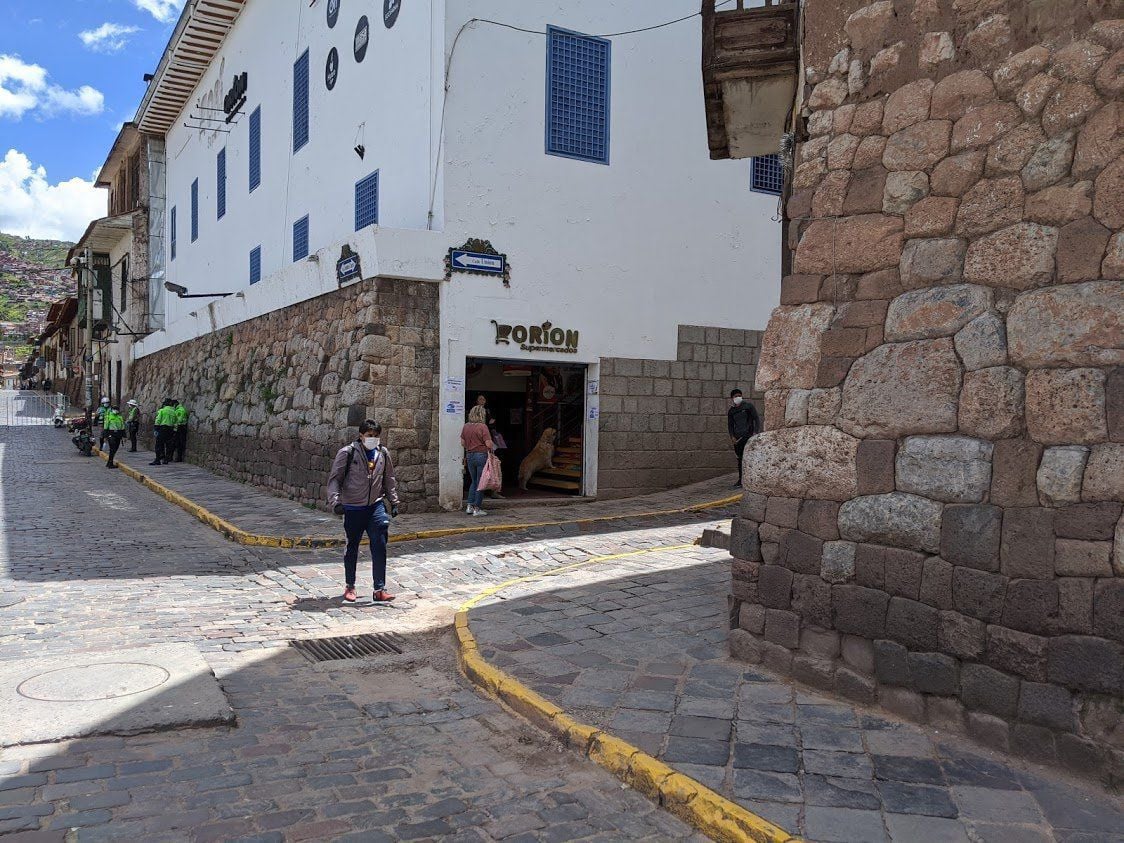 The street leading to the Cusco, Peru, market, the only trip Nate Marschalk and Elizabeth Valerio are allowed to make while under quarantine in Cusco. (Photo by Nathaniel Marschalk) 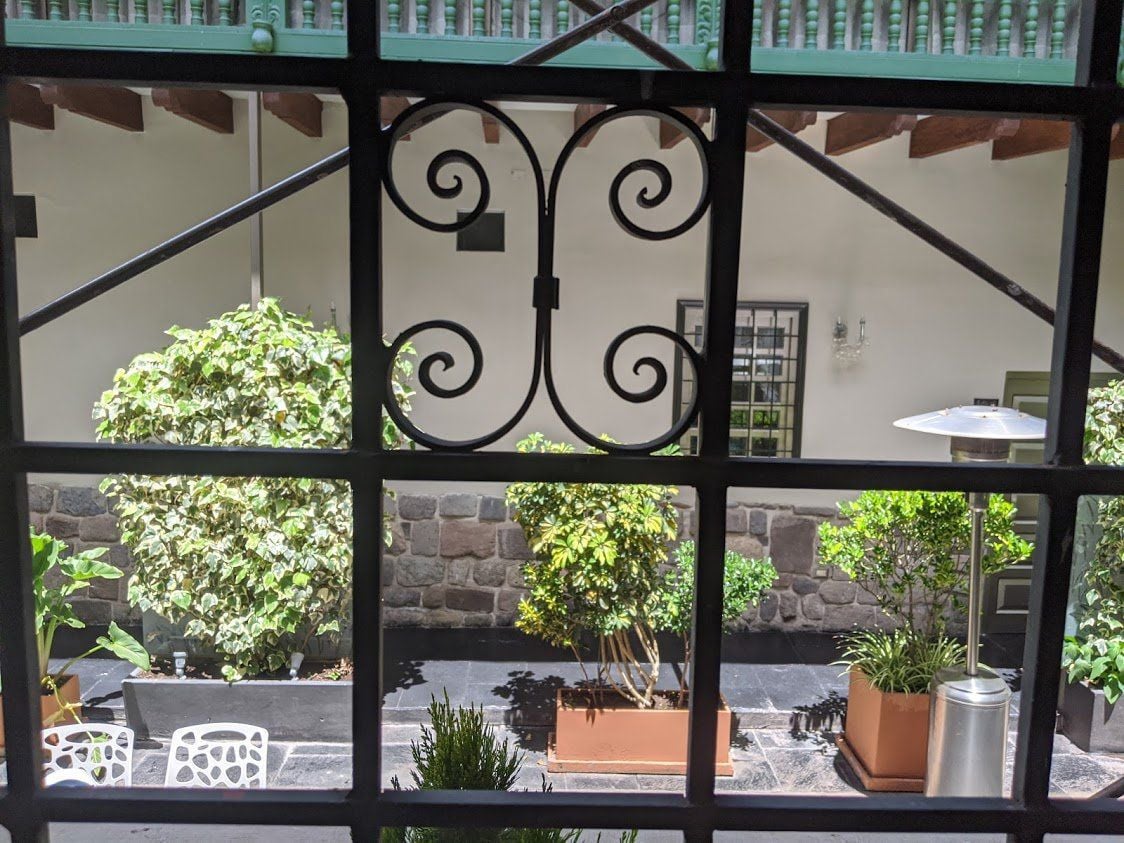 The view from the hotel room where Nate Marschalk and Elizabeth Valerio are quarantined in Cusco, Peru. (Photo by Nathaniel Marschalk) 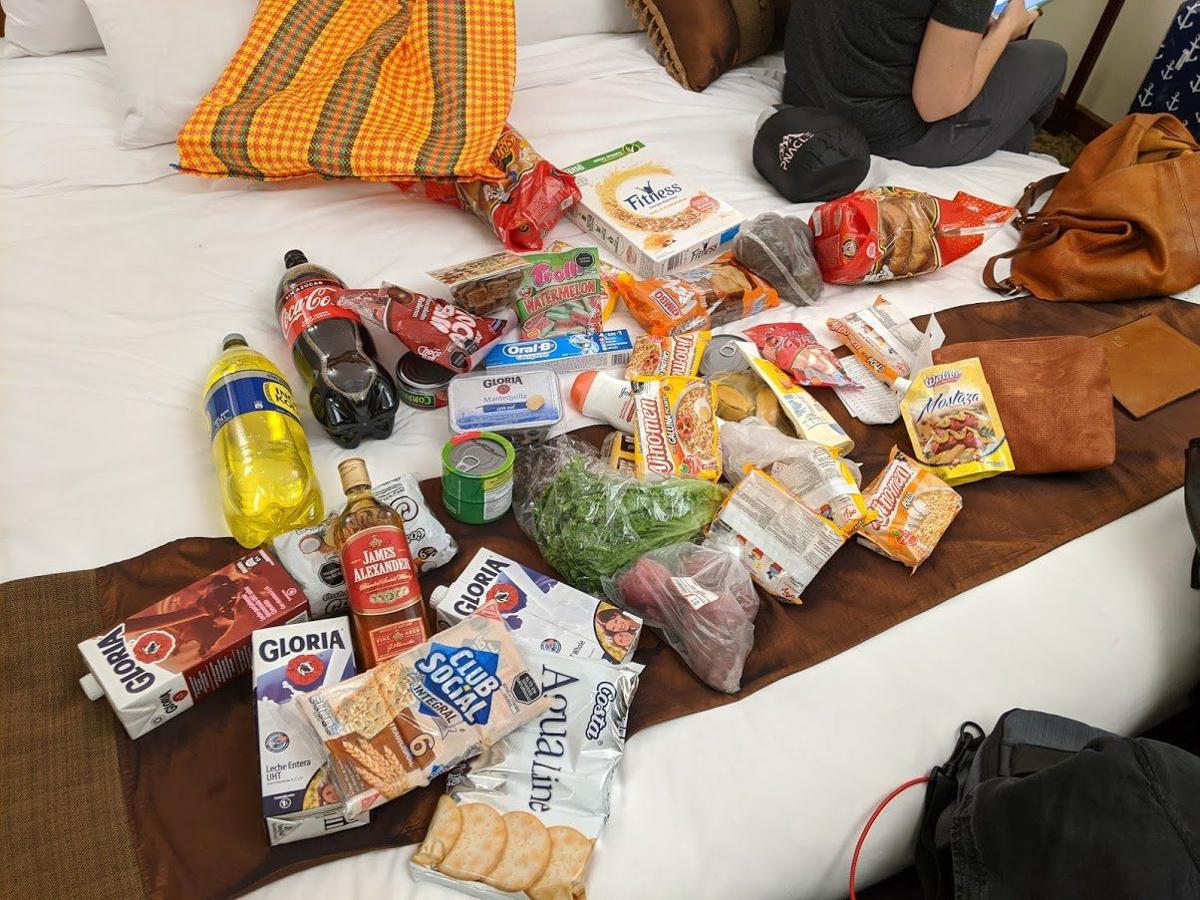 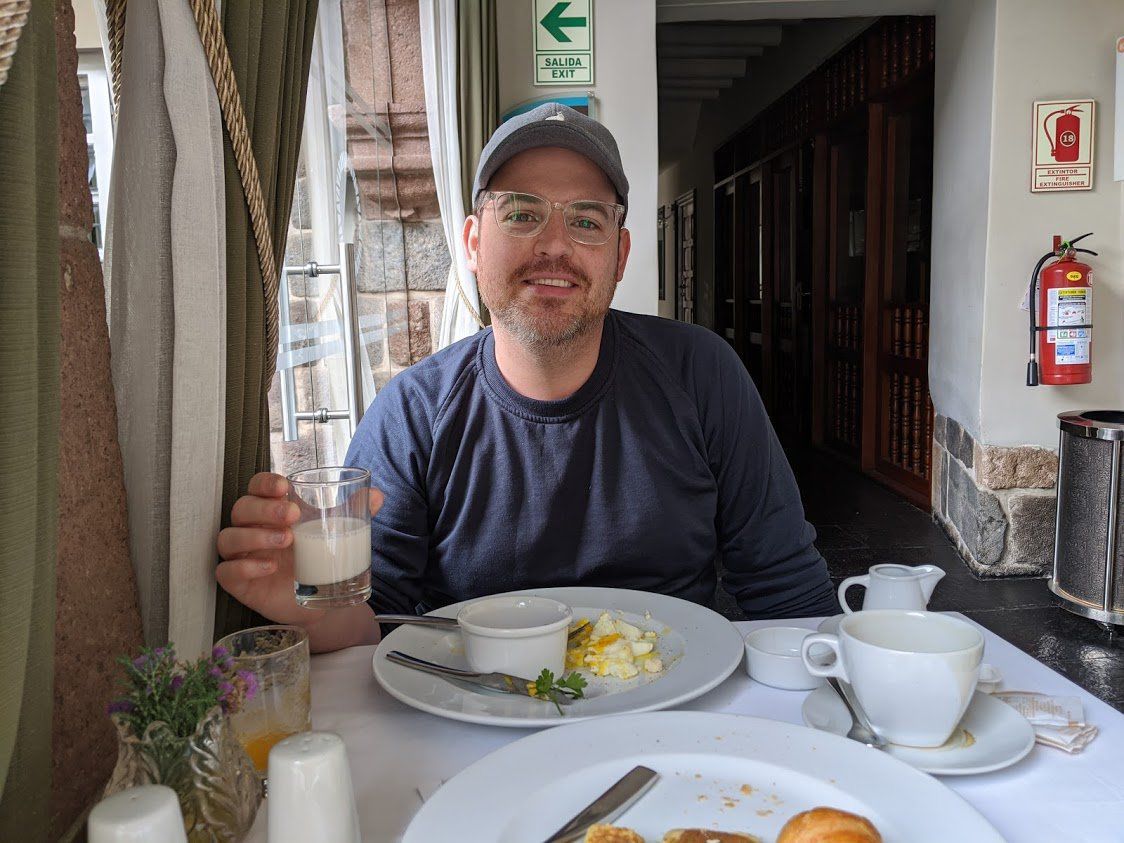 Nate Marschalk, under quarantine at a hotel in Peru. (Photo by Elizabeth Valerio) 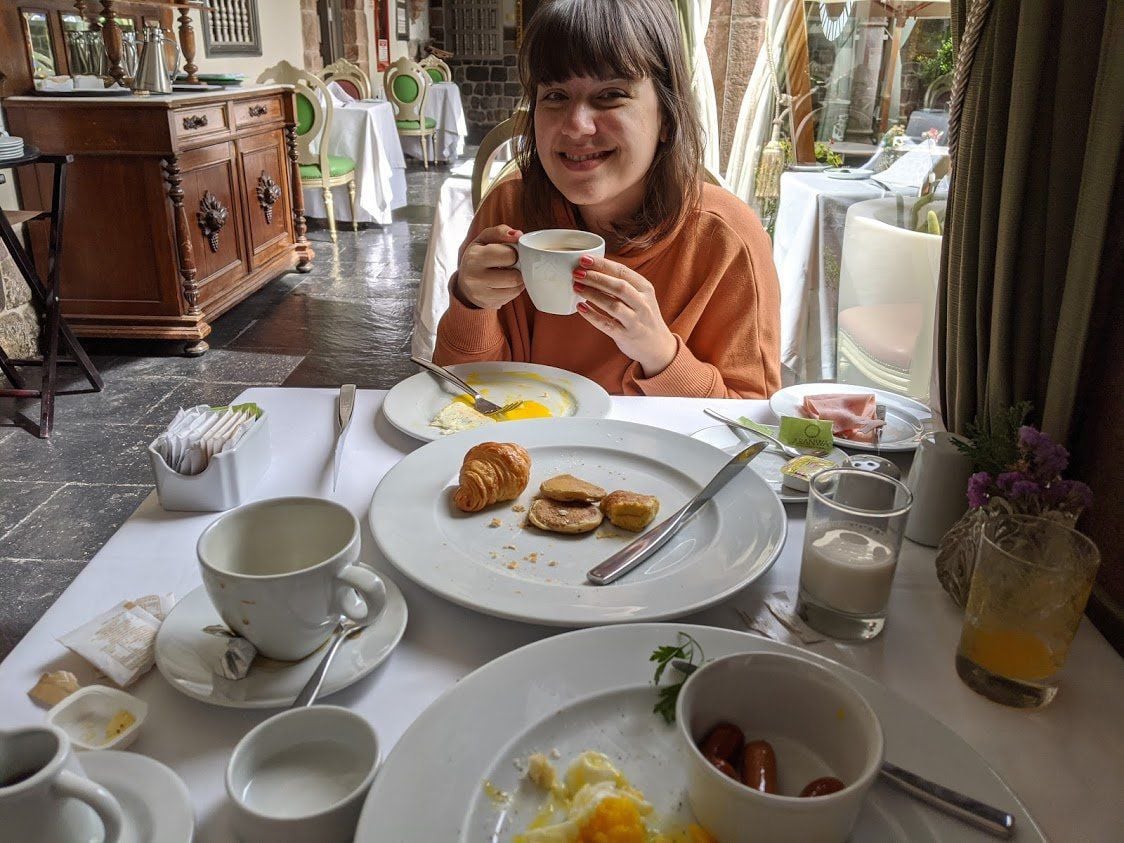 Elizabeth "Liz" Valerio, under quarantine at a hotel in Peru. (Photo by Nate Marschalk)