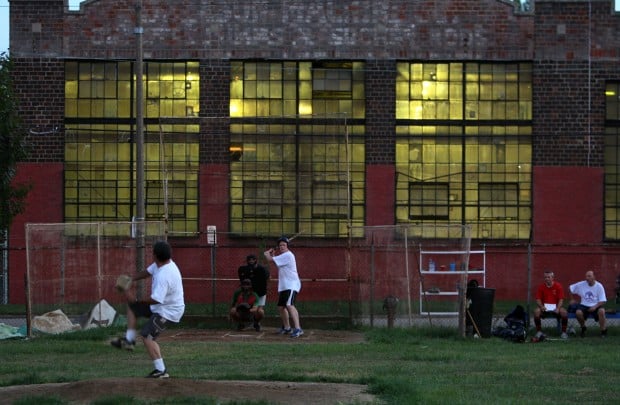 August 11, 2010 - As the evening light fades, lights in a factory behind the field come on as Ray Arras pitches to Jared Haman Wednesday at the Gateway Corkball Club in St. Louis. J.B. Forbes jforbes@post-dispatch.com 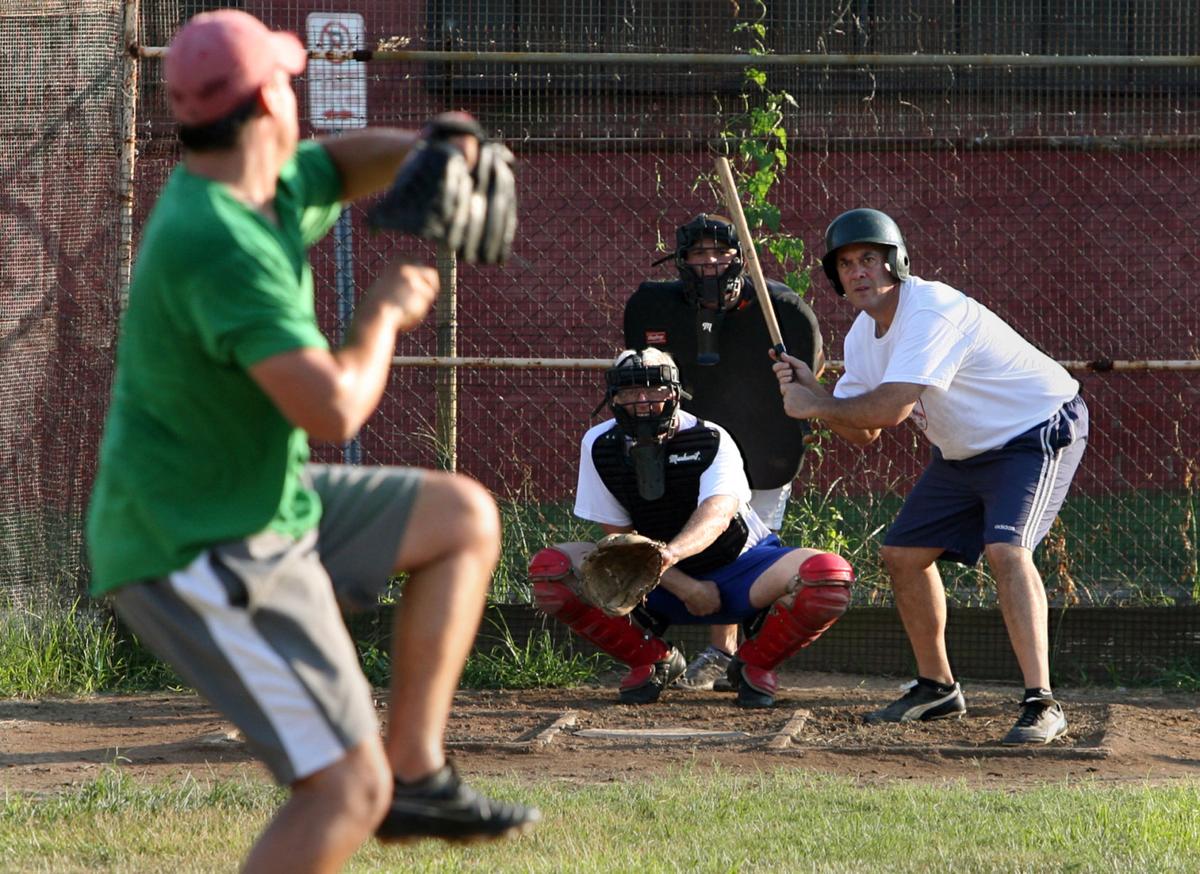 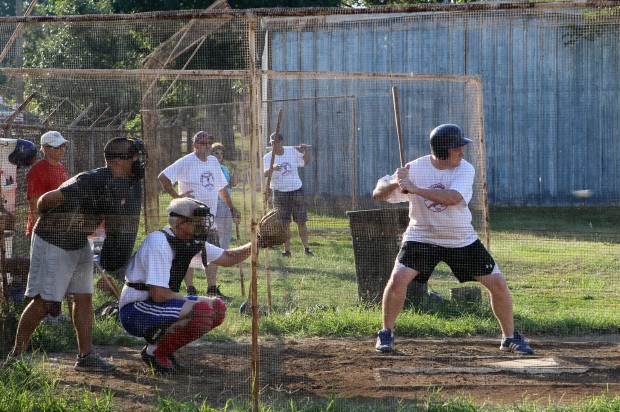 August 11, 2010 - The field is nothing like Busch Stadium, but players continue to come to play the game Wednesday at the Gateway Corkball Club in St. Louis. J.B. Forbes | jforbes@post-dispatch.com 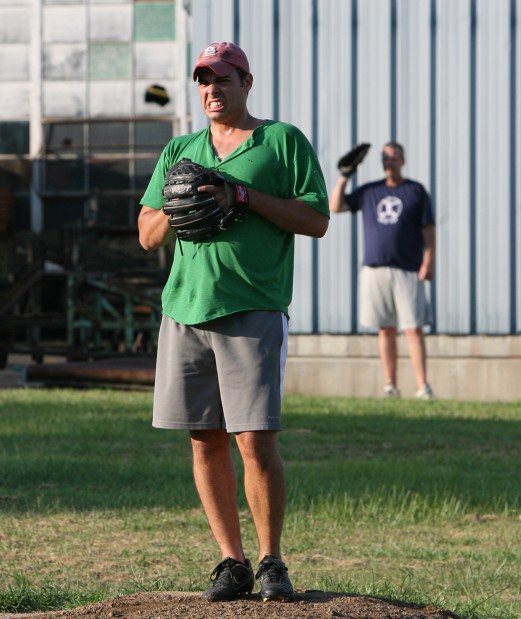 August 11, 2010 - Tony Minor glares in at the batter before pitching Wednesday at the Gateway Corkball Club in St. Louis. Behind him playing outfield is Jeff Krug. J.B. Forbes | jforbes@post-dispatch.com 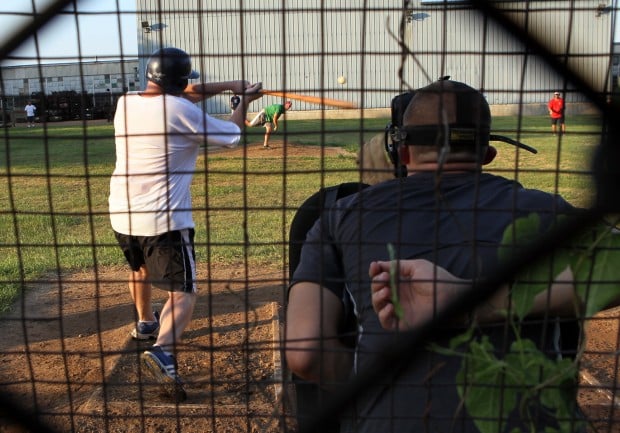 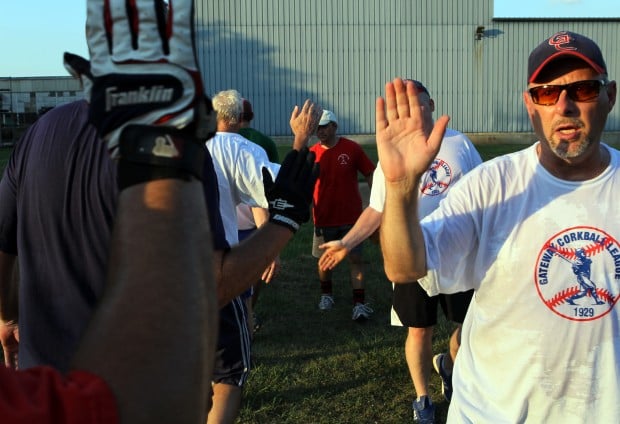 Some of the ballplayers who gathered on the grassy lot behind the metal products factory were barely past their teens; others were past their prime, but it didn't matter — they came to share in the competition and camaraderie.

The game is corkball, which locals say was invented here around 1900 by a group of brewery workers looking for something to do on their break. A beer barrel stopper carved into a ball and a broken-off broom handle were the first equipment in a game that has all the allure of baseball without base running or the need for nine players.

The game became so popular that leagues sprouted up at taverns, where cages were erected, but eventually, most of the play moved to county parks. Only about five local clubs exist today.

The competition last Wednesday was at the oldest of these, Gateway Corkball Club at the corner of Walsh Street and Ulena Avenue in south St. Louis. The three fields share an outfield wall rivaling the one at Fenway Park. Hitting the ball over the 30-foot-high Blue Monster is a home run; hitting the wall a double.

On this muggy August night, dozens of dragonflies hovered over the fields, their up-and-down flight mimicking the movement of the knuckleballs crossing home plate.

Blaine DeCambaliza, 42, of south St. Louis, was waiting his turn at bat. He grew up in Minnesota, where a puck and a different kind of stick is the preferred sport, but after his first season of corkball, he's found a new passion.

"The first time I saw this place I couldn't believe more people didn't know about it," he said. "It's a Field of Dreams in the city."

In corkball, players try to hit a ball that's two inches in diameter with a bat that's only 1 1/2 inches wide. Pitchers throw a whole arsenal — including spitballs — at batters who get just one swinging strike if the catcher holds onto the ball. A foul ball is an out, and five balls are a walk.

Tony Minor, 30, of St. Louis, has six relatives playing in the club, so corkball is a way to stay connected to family and good competition.

"To play in a league that still keeps the stats is just kind of fun," he said. "It takes you back to those days when you were growing up, and it did matter if you had a good night or not."

Wayne Cupp, 75, is the oldest playing member of Gateway's club, and his batting average of .428, illustrates that even older players are no easy outs.

"I just look for a fastball," he said. "I refuse to swing at a curve unless I get a strike on me."

Marty Kirner, 48, of St. Louis, is a member of his club's "All-Century Team," and he spent much of the doubleheader trying to instruct and rally his teammates.

"Watch this pitcher's speed. If you don't square it up, you're going to foul it off," he said.

Like any other contest, the play can get pretty heated, but things rarely get out of hand at Gateway because no drinking is allowed on the field, and anyone who throws a punch at another member is shown the door. On this night, the chatter was all good-natured.

Players razzed Tim Goedeker about his batting slump and his bats, one named Mr. .888 (to reflect his batting average for part of a season) and the other Mr. OBP (to tout his on-base percentage).

"I guess we'll let Tim make all the outs this inning too," chirped Kirner.

Goedeker said when you're having a year like he is, you better be coming for more than just your batting average. Clearly many of the men were.

After the game, the men retreated to their clubhouse, a no-frills place where players could rehash the game over a bottle of beer. The walls are lined with stats dating back to the club's founding in 1929. They highlight Gateway legends like Tom Niemeyer, who threw seven no-hitters in a row.

Many of the members are second- or third-generation corkballers, who grew up watching their dads play and earned soda money by shagging foul balls.

Joe "Pepe" Greco, 41, of south St. Louis, has fond memories of Christmas parties at the clubhouse and picnics that featured barbecue, games and a swimming pool.

"That was almost better than a week-long vacation," he said.

At the end of every year, the club has an awards banquet that honors not only the top players, but those who made the goofiest plays, like Mike Goedeker, 47, of Sunset Hills, who got hit by a pitch to win a game against his cousin and his nephew.

"I got a booby prize for that because there was a big uproar," he said. "They gave me a plaque and poem that told the story of how it upset my cousin Bobby."

When players retire from corkball, they become social members and still come up to the clubhouse to play cards or watch sports on TV.

Gateway is hoping for a youth movement to beef up its membership, which now stands around 90, to keep the St. Louis classic going.

He said the Jefferson Barracks tournament a week or so ago, which used to have dozens of teams, was down to seven.

"It would be nice to get the game revitalized a little bit," Goedeker said.

Digest: Soccer player Eriksen 'was gone' before being revived

Cornerback Allie Green IV is headed to the Tigers.

Weekend sports on the air

The woman was shot and paralyzed below the waist, and her best friend was killed, in a shooting at Applebee’s in St. John.

August 11, 2010 - As the evening light fades, lights in a factory behind the field come on as Ray Arras pitches to Jared Haman Wednesday at the Gateway Corkball Club in St. Louis. J.B. Forbes jforbes@post-dispatch.com

August 11, 2010 - The field is nothing like Busch Stadium, but players continue to come to play the game Wednesday at the Gateway Corkball Club in St. Louis. J.B. Forbes | jforbes@post-dispatch.com

August 11, 2010 - Tony Minor glares in at the batter before pitching Wednesday at the Gateway Corkball Club in St. Louis. Behind him playing outfield is Jeff Krug. J.B. Forbes | jforbes@post-dispatch.com

August 11, 2010 - Tim Goedeker, right, and the rest of the two teams congratulate each other at the end of the first game Wednesday at the Gateway Corkball Club in St. Louis. J.B. Forbes | jforbes@post-dispatch.com
© Copyright 2021 STLtoday.com, 901 N. 10th St. St. Louis, MO | Terms of Use | Privacy Policy
Powered by BLOX Content Management System from TownNews.com.
You don't have any notifications.