For me, one image will forever define police Chief Jon Belmar’s career.

The chief, who announced this week he is retiring in April from the St. Louis County Police Department, is not even in the picture.

It’s from inside the MetroLink security station at the North Hanley transit stop sometime in 2015. In the still-frame photo taken from a security video, a county police officer stands on a chair and tapes an envelope over the camera. The photo — and several others liked it — showed a pattern of county police officers assigned to MetroLink sleeping in offices during a time when crime was on the rise in the transit system, and covering their tracks while they were doing it.

The resulting controversy led to calls for Belmar to resign. The police department, St. Louis County Council and Legislature all said they’d investigate, but none really did.

In fact, later that year, Belmar gave the offending officers a commendation.

It was peak Belmar.

Nothing to see here, he said.

The political power brokers in St. Louis County swept the MetroLink shenanigans under the rug.

Belmar was their guy. He was a white, barrel-chested tough guy who rose up through the ranks of the tactical squads, who oversaw much of the military-style presence in Ferguson after the shooting death of Michael Brown on Aug. 9, 2014. Never mind the actual crime stats on MetroLink; if Belmar said it was safe, that was good enough for the leaders of St. Louis County.

But those leaders are gone now, and so, soon, will be Belmar.

Steve Stenger, the county executive who wanted Belmar to run MetroLink security even after his officers were found sleeping in offices, is in federal prison.

Bob McCulloch, the prosecuting attorney who had sidelined the MetroLink police officers by threatening them with prosecution, was defeated in his next election.

The officers in those photos — the ones who put tape over a security camera to hide their actions — got a commendation issued by the police board, after Belmar told them they were responsible for record arrests and seizures of guns and drugs.

When I asked for the documentation behind the commendation, Belmar blocked it, saying it would cost $5,000 to obtain the records behind the statistics he had supposedly already gathered.

Meanwhile, the public officials who helped bring the situation to light were forced out, as Metro public safety chief Richard Zott was, or left frustrated with the status quo, as former Bi-State CEO John Nations was, because they didn’t play by St. Louis County rules.

When women, and African American officers, and gay officers accused him or others in the department of discrimination, he waved it off, supported by a compliant police board.

Even when his own investigations validated discrimination, as in the case of a black training officer named Nikki Brown, he did nothing.

“I hope you will accept my sincere apology for any aggravation caused by his actions,” Belmar wrote to Brown, referencing the white colleague who had spoken in racially offensive language around her. “Steps have been taken,” he wrote her, to make sure the behavior doesn’t happen again.

It took a St. Louis County jury, in the discrimination lawsuit filed by gay police Sgt. Keith Wildhaber, to finally hold Belmar accountable. The members of that jury saw Belmar as a bully. They saw officers lie on the stand, and they would have none of it.

“We wanted to send a message,” the jury foreman told reporters after that verdict, which has now been dropped to $10 million in an out-of-court settlement. “If you discriminate you are going to pay a big price. … You can’t defend the indefensible.”

Even on his way out, though, Belmar is getting the kid-glove treatment by county leaders.

New County Executive Sam Page, in a written statement, seemed to both take credit for pushing Belmar out the door, and also suggest that it was just the natural end to a long and successful career.

“Belmar shared with me a year ago that he was considering retiring in 2020 so this is the natural course of his plans. His career is long and accomplished, and I appreciate the work he has done,” Page said.

On one hand, kicking a guy while he’s down isn’t Page’s style.

Still, like Stenger before him, when it comes to Belmar, Page seems more concerned with political optics than truth.

Meanwhile, MetroLink still has unresolved safety problems. The entities that were supposed to work together are struggling to figure out who is in charge. Wildhaber got his white shirt — he is a lieutenant now — but Belmar put him in charge of a new diversity unit with no input from the black police officers who have been the subject of numerous complaints of discrimination under his unaccountable reign.

It is as though the tape is still covering the camera, obscuring Belmar’s greatest hits.

Metro columnist Tony Messenger looks into allegations about the county officers who police the system.

Metro records show county police officers covering cameras and loitering in office when they should be patrolling platform and trains.

McGuire wrote that the camera, which is monitored by the Bi-State Development Agency, "is clearly an invasion of privacy."

Messenger: Where are the St. Louis County cops on MetroLink? 'They are hiding somewhere.'

Customers complain that they don't often see county cops on MetroLink platforms. The evidence may just back them up.

John Nations and Steve Stenger at a standstill over whether county police have to answer taxpayers.

Messenger: Caught on camera. What's next in MetroLink safety saga?

On his regular Tuesday appearance on the McGraw Milhaven show on KTRS, Post-Dispatch metro columnist Tony Messenger discusses his series on sa…

Messenger: History repeats itself as timing of campaign donation to St. Louis county executive is questioned

Check from Thompson Coburn came as law firm was negotiating a settlement with former county employee.

Messenger: With verdict of close to $20 million, Belmar’s term as chief forever tarnished

Police officer had filed complaint about harassment at police academy. 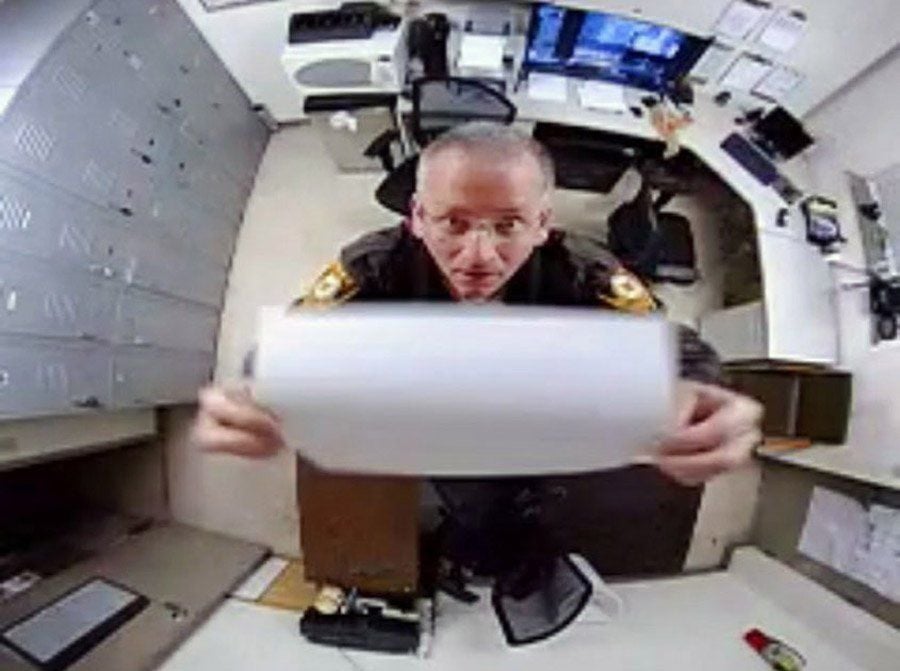 In a still frame grab from surveillance video, an unidentified St. Louis County Police officer appears to be placing a sheet of paper in front of a security camera at the North Hanley security office at the MetroLink station. Metro records obtained by the Post-Dispatch indicate there have been 8 such incidents. Photo via Metro Department of Public Safety 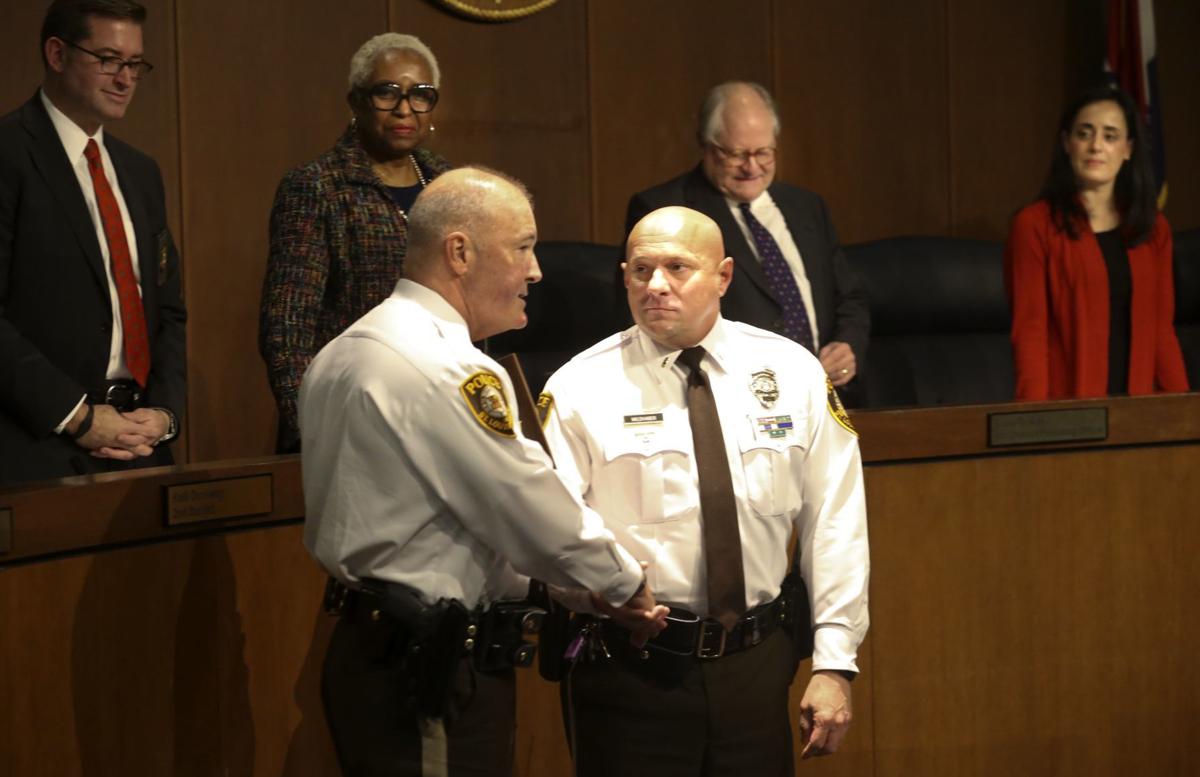 St. Louis County Police Chief Jon Belmar presents a plaque to recently promoted Lt. Keith Wildhaber on Thursday, Dec. 19, 2019, during the first public meeting of the newly appointed St. Louis County Police Department Board of Police Commissioners in the St. Louis County Council Chambers in Clayton. Wildhaber won a nearly $20 million verdict against the county in a discrimination case after being passed up 23 times for promotion. Photo by Laurie Skrivan, lskrivan@post-dispatch.com