Every day in Missouri, in a courtroom in one of the state’s 114 counties, the state’s judicial system faces an impossible task.

A defendant comes before a judge charged with a felony. That defendant has proven that he doesn’t have money for an attorney. The local public defender’s office — overburdened with too many cases — asks the judge to put the person on a waiting list. If he’s lucky, he doesn’t go to jail.

But some of them do. And they sit there for days, weeks, even a year or longer, until the broken system finds time to pay lip service to their civil rights:

The right to an attorney.

The right to a speedy trial.

The right to not be discriminated against because they’re poor.

Every day in Missouri, those rights are violated. And everybody knows it. The judges. The public defenders. The prosecutors. Even the state lawmakers who refuse to fund the system.

On Thursday, the latest salvo was fired in a nearly two-decade-long battle. The ACLU of Missouri and the MacArthur Justice Center filed a class-action lawsuit in Cole County Circuit Court. The suit is on behalf of more than 4,600 criminal defendants in Missouri who are being denied the right to a public defender because they sit on a waiting list, the result of the system being woefully underfunded. 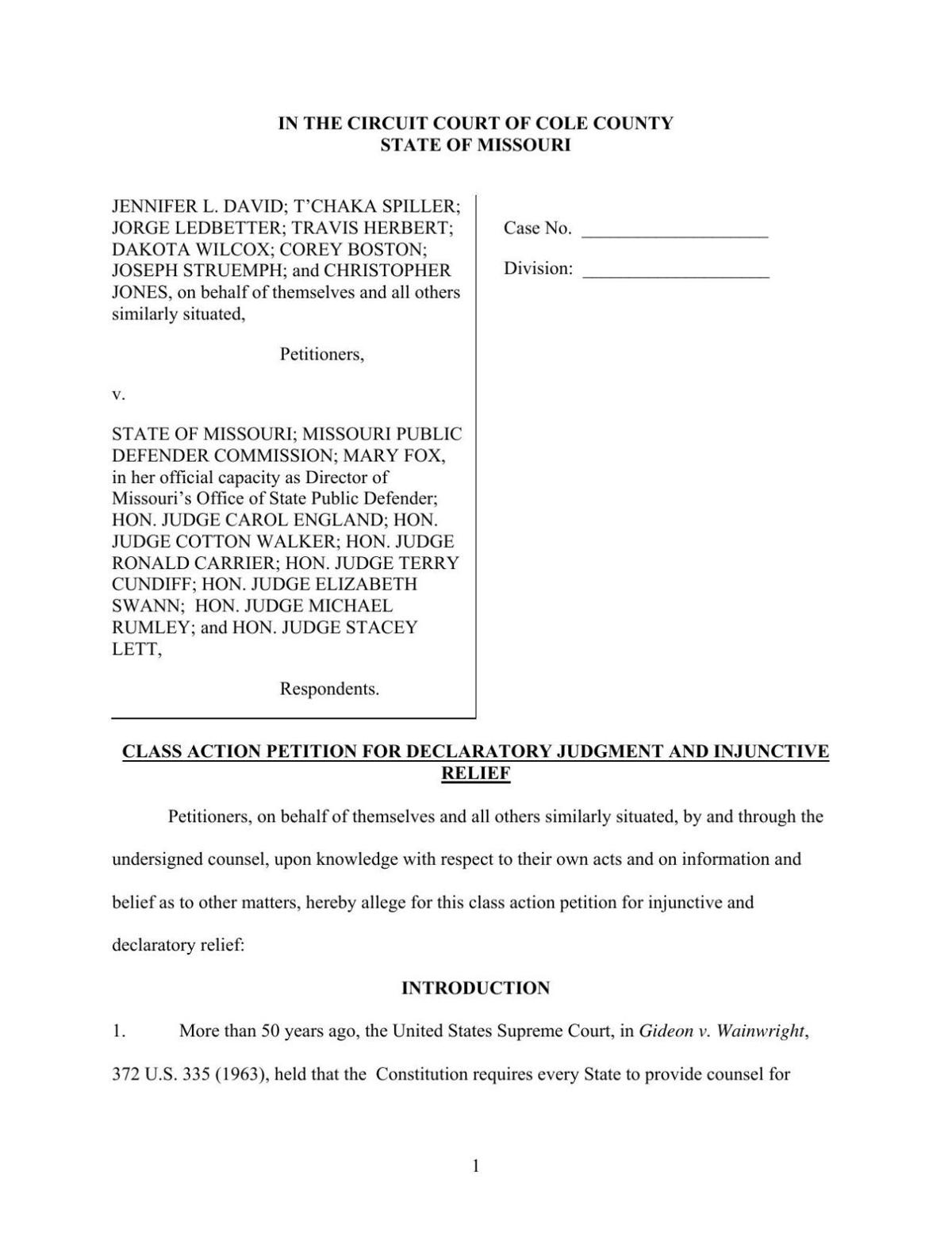 This, the lawsuit says, is an “urgent constitutional crisis” that is “only worsening,” and now it will play out in two public buildings just a few blocks from each other on High Street in Missouri’s capital city.

The lawsuit follows the failure of the state to reach a settlement in mediation over a separate and ongoing federal lawsuit regarding Missouri’s inability to provide adequate defense for indigent defendants. When the public defender’s office agreed as part of the settlement to get rid of its waiting lists and limit the amount of hours worked by public defenders, Attorney General Eric Schmitt intervened, and last month, U.S. District Judge Nanette Laughrey, while recognizing the very serious crisis, scuttled the settlement.

Mary Fox, the head of the state’s public defender system, is a defendant in the new lawsuit, but she’s spending much of her time these days in the Capitol, seeking at least a $3 million boost in funding to meet her office’s most basic constitutional requirements.

“It is a problem for not only those who qualify for services, but for the courts,” she told lawmakers earlier this month.

Multiple independent evaluations of Missouri’s public defender system have determined it is among the worst funded in the nation. Last year, a national report by the Brennan Center for Justice called for national reforms that included properly funding public defender’s offices. The report focused significantly on the problems in Missouri.

Now, the new lawsuit once again asks a judge to force the state to deal with its constitutional crisis. Either provide indigent defendants public defenders, or drop their criminal cases, attorneys for the ACLU and MacArthur Center argue. There is no middle ground.

Take Jennifer L. David of Callaway County, one of the plaintiffs in the lawsuit. She’s one of the lucky ones, having been allowed to use her credit card to post a surety bond. For eight months, she’s waited for a public defender as her second-degree assault case has been delayed. Meanwhile, she can’t work. “Because of the pending charge against her, she is unable to find employment as a nurse and has had at least three job offers retracted because of the pending charge,” the lawsuit alleges.

Then there’s Jorge Ledbetter, who is stuck in St. Charles County Jail on a robbery charge. He can’t get a hearing to try to get his bond reduced without access to a public defender. And, the lawsuit says, “he was told that if he paid his bond to get out of jail he would no longer be eligible” for a public defender. So he sits in jail, awaiting some semblance of justice.

“The (waiting list) gimmick does not hide what is happening here,” says ACLU legal director Tony Rothert. “Missourians who have been convicted of no crime are warehoused in jails with no legal representation simply because they are poor.”

Messenger: Overburdened public defenders in St. Louis County seek relief. This time they may get it

Prosecutor withdraws opposition to wait list. Judges on board.

Brennan Center for Justice calls for more parity in funding between public defenders and prosecutors.

Messenger: Two-tiered justice is the norm in Missouri, but times, they are a changin'

From bail to probation, Missouri's criminal justice system is under attack for civil rights violations.