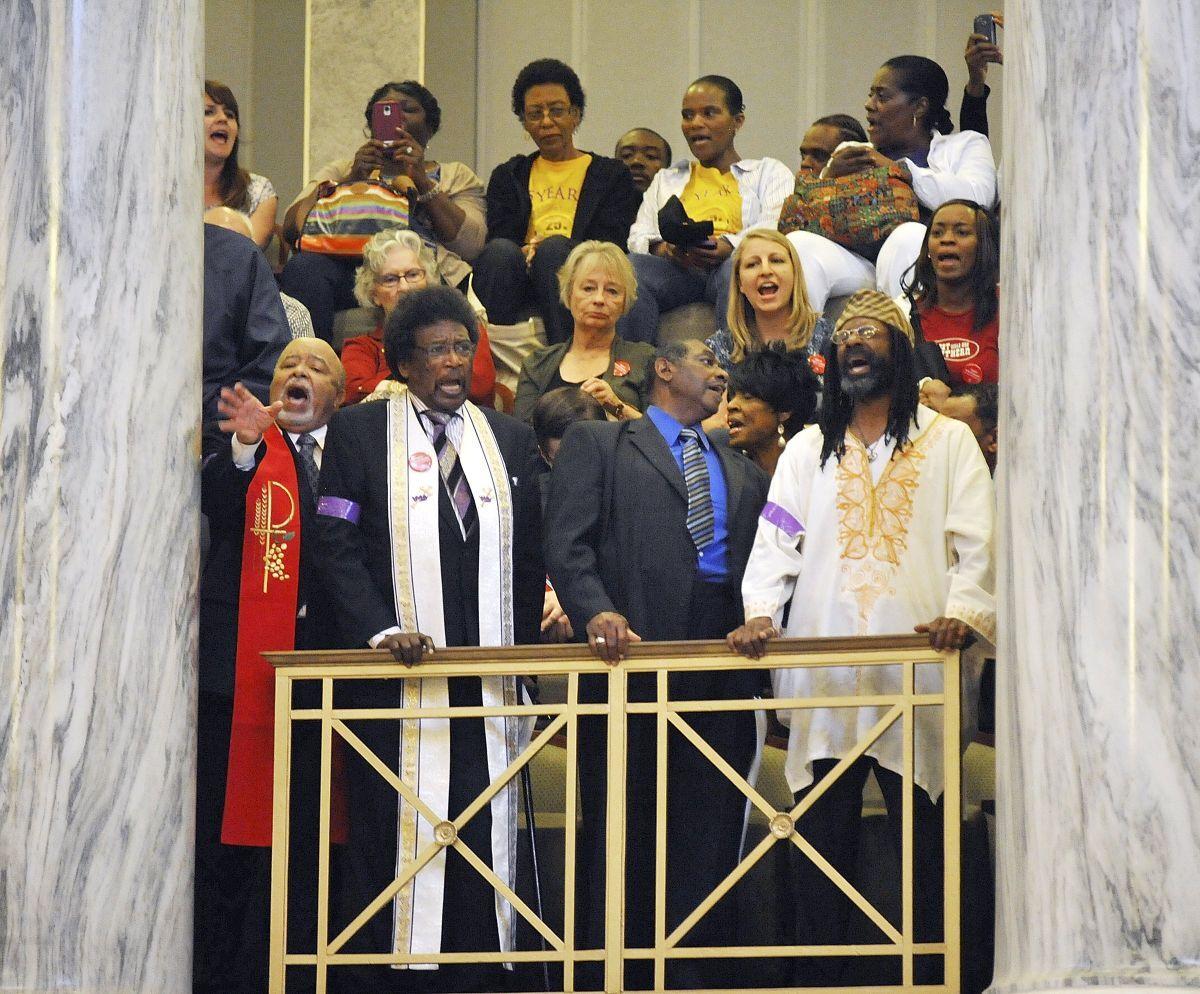 Chanting for the Missouri Senate to approve Medicaid expansion, clergy members and faith leaders gather supporters at the Capitol in 2014. Protesters were cooperative and peaceful, but 23 were arrested after shutting down Senate debate for about an hour. (AP Photo/The Jefferson City News-Tribune, Julie Smith) 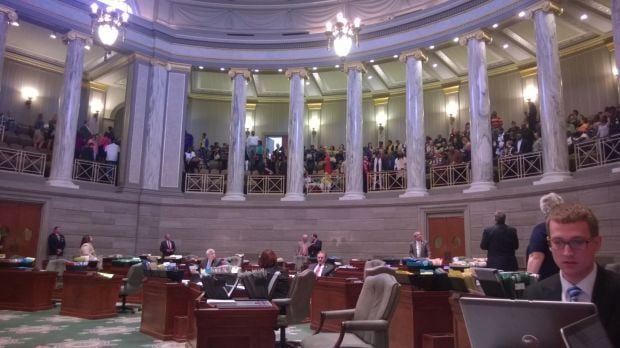 Protesters force closure of the Missouri Senate on Tuesday.

Rod Chapel was almost too angry to talk.

It was last Wednesday night, as rioters seeking to overturn the presidential election results and keep their authoritarian leader, President Donald Trump, in power had stormed the U.S. Capitol, disrupting a joint session of Congress.

There was violence and mayhem. In the end, five people would end up dead, including a police officer.

Chapel, the president of the Missouri NAACP, was devastated over the attack on American democracy. As a Black man, he was viewing the two distinct Americas that people who look like Chapel have been railing about for years.

“Civil disobedience can get you arrested and prosecuted — depending on who you are,” Chapel told me. “If you’re Black, you get arrested and feel the weight of prosecution. If you’re Caucasian, however, dressing in camo, being armed, breaking into the Capitol, and assaulting police officers is allowed with little recourse. It’s not the act of disobedience; it’s the color of the skin of the participant.”

I wanted to talk to Chapel because as I was watching the brutal attack on American democracy, with some Capitol Police officers taking selfies with the rioters and few visible arrests, I thought back to the “Medicaid 23.”

On May 6, 2014, three months before Ferguson became a trending hashtag on social media, 24 pastors in Missouri, nearly all of them Black, were legally in the visitors’ gallery overlooking debate in the Missouri Senate in Jefferson City. They sang. They prayed. They chanted. The pastors were encouraging senators to provide health care to poor people, many of them in the church flocks of the men and women of the cloth who sought help from their almighty God in their quest.

“Do justice!” they demanded. The Senate gaveled out of session. The pastors were arrested and taken to jail. They were prosecuted and taken to trial. The trial of one pastor was moved, and hence, the rest became known as the Medicaid 23.

Chapel was one of their lawyers, along with state Rep. Jay Barnes, a Republican from the state’s capital city. Race was a central component of the trial, as Chapel and Barnes asked jurors if they thought they would be there, in court more than two years later, if the protesting pastors had been white.

Chapel knows the answer to the question, and so does a country that has now seen in a matter of months two completely different approaches to preparing for protests in the nation’s capital. After a police officer in May killed George Floyd in Minneapolis by kneeling on his neck, the death recorded on dramatic video, the nation hit the streets in protest, led by Black Lives Matter leaders. One dramatic photo before a June march in Washington tells a story, with dozens of heavily armed federal officials standing guard at the Lincoln Memorial before the march and rally even began.

Capitol Police initially declined requests for federal help to prepare for the pro-Trump rally and march. Participants fully advertised their plan ahead of time, even showing up with T-shirts emblazoned with the words “Civil War” printed above the date of the planned rally. They bragged about intended violence even before Trump egged them on, told them to be “wild” and sent them marching toward the Capitol.

Since then, as Black civil rights leaders have pointed out the dichotomy we all could see with our own eyes, there have been increased attempts to identify the participants in the violence and make arrests. The chief of the Capitol Police has stepped down. There will be federal investigations into the debacle.

One of the people involved in any hearings will be U.S. Rep. Cori Bush, the first Black woman from St. Louis ever sent to the House. She knows firsthand how Black people get treated at a protest.

“Had it been people who look like me,” she told MSNBC that night while she was still in a secure location amid the rioting, “we wouldn’t have made it up those steps.”

On Monday, Bush filed a resolution seeking to hold accountable any members of Congress who are found to have helped stoke the violence at the Capitol.

The entire event has become an inflection point for a Republican Party now trying too late to disentangle itself from Trump. But Chapel hopes, that like Floyd’s killing, like Ferguson, like the Medicaid 23 trial, this shameful moment in American history will become another inflection point on understanding our nation’s deep racial divide, and the reality that Black people still live under a different set of rules when it comes to policing.

“The inequality is plain,” Chapel says. “It’s our country’s original sin on display for all to see.”

Mark Richardson set himself up as the defender of the law in Missouri's capital city. But he's selective about how to apply it.

Messenger: NAACP president sends message to Missouri Legislature -- He will not be silenced.

Rod Chapel was silenced during a House hearing, but he'll continue to advocate against discrimination.

Messenger: Medicaid 23 trial will resonate in next legislative session

Messenger: Case is over for 'Medicaid 23' protesters, but their cause continues

Preachers and clergy from around Missouri advocated that the state Legislature expand Medicaid to thousands of poor people who need it.

Law-and-order Schaefer is star witness for defense in Medicaid 23 trial.

Chanting for the Missouri Senate to approve Medicaid expansion, clergy members and faith leaders gather supporters at the Capitol in 2014. Protesters were cooperative and peaceful, but 23 were arrested after shutting down Senate debate for about an hour. (AP Photo/The Jefferson City News-Tribune, Julie Smith)

Protesters force closure of the Missouri Senate on Tuesday.