Charlie Weiss called Josh Kezer moments after he got the news.

A judge appointed by the Missouri Supreme Court as a special master had issued a 222-page report exonerating Donald “Doc” Nash of the 1982 murder of his former girlfriend, Judy Spencer, outside Salem, Missouri.

Kezer had one question for his attorney, the man who had helped free him in 2009 of his own wrongful conviction.

“Is this as strong as the ruling in my case?” Kezer asked Weiss, a partner at the downtown St. Louis law firm Bryan Cave Leighton Paisner.

Yes, said Weiss, about the report issued by Judge Richard J. Zerr of St. Charles County. Nash, who is 78, should soon be walking out of state prison in Bonne Terre a free man.

I was there the cold February day when Kezer practically ran out of the Jefferson City Correctional Center and breathed air as a free and vindicated man for the first time in 16 years. One of Kezer’s first thoughts wasn’t about himself or the corrupted judicial process that led to his wrongful conviction, but of other innocent men like him stuck behind bars for crimes they didn’t commit.

There are others, Kezer said that day.

Indeed, there are. Since Kezer walked free, Weiss and his legal team, including Stephen Snodgrass and Jonathan Potts, have freed two other men: George Allen and David Robinson. Nash, if he survives until the Missouri Supreme Court accepts the special master’s damning report and sets him free, will make three.

Nash is 78. He has lung disease and a bad heart. There is a COVID-19 outbreak at his prison.

On Tuesday, his attorneys filed an emergency motion with the court, asking for an expedited release.

“He’s innocent,” says Potts. “He’s stuck in prison for a crime he didn’t commit. We’re afraid he might just not wake up one day.”

Nash has been in prison since his conviction in 2009 of Spencer’s brutal murder. He was arrested 26 years after her death after the Missouri Highway Patrol did some testing and found his DNA under her fingernails.

Prosecutors in Dent County came up with a novel and untested theory: That because she had washed her hair since the last time the two lovers had been together, there was no way for her to still have his DNA under her fingernails.

There was no other evidence tying Nash to the crime. He didn’t own a shotgun, and she died of a shotgun blast. His fingerprints weren’t found on her abandoned car, but two other men’s were, including one who was a sex offender who later killed himself. Nash passed a gun residue test. He always maintained his innocence.

The case, Zerr wrote, is a “miscarriage” of justice based primarily on debunked “junk science.” Zerr finds that Nash meets the “actual innocence” standard that allows a court to examine new evidence, gathered long after the trial, including the testimony from the key prosecution witness, a state crime lab employee, recanting her “hair washing” testimony at trial. 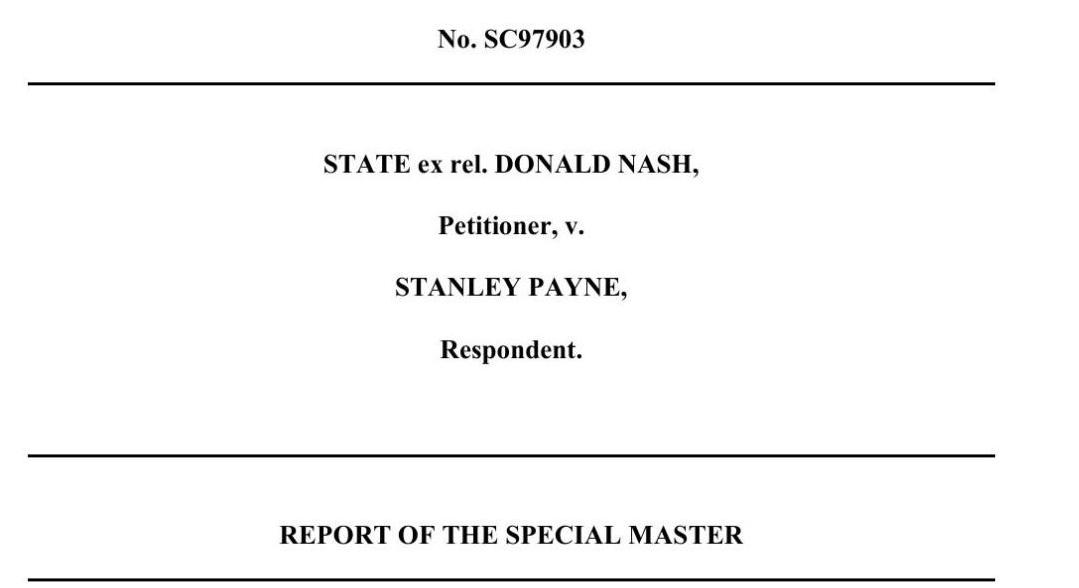 It’s likely this case wouldn’t have made it back to the Missouri Supreme Court without Kezer’s efforts. After Kezer was released, Nash’s daughter sent Kezer an email. They started talking about the case, and Kezer called Weiss and asked him to take a look at it.

Indeed, the legal team recognized the manifest injustice that had been done and filed the writ for habeas corpus that led to the special master’s findings.

“When I see a man like Doc, I see myself,” says Kezer, who lives in Columbia. “It’s one of those cases that really moves your heart.”

For now, Nash is still behind bars, awaiting freedom after a judge said he should be added to the growing list of Missouri men convicted by a system that sometimes elevates convictions over the pursuit of truth and justice.

Messenger: Lawyer who has freed the wrongfully convicted wants Missouri counties to stop charging for jail

Messenger: Free at last, David Robinson runs into the arms of the woman he loves

In office of lawyers who freed him, former inmate gets married a month after he obtained his freedom.

On a bitterly cold February day in 2009, Joshua Kezer stood outside the Jefferson City Correctional Center and sucked in his first breath of f…