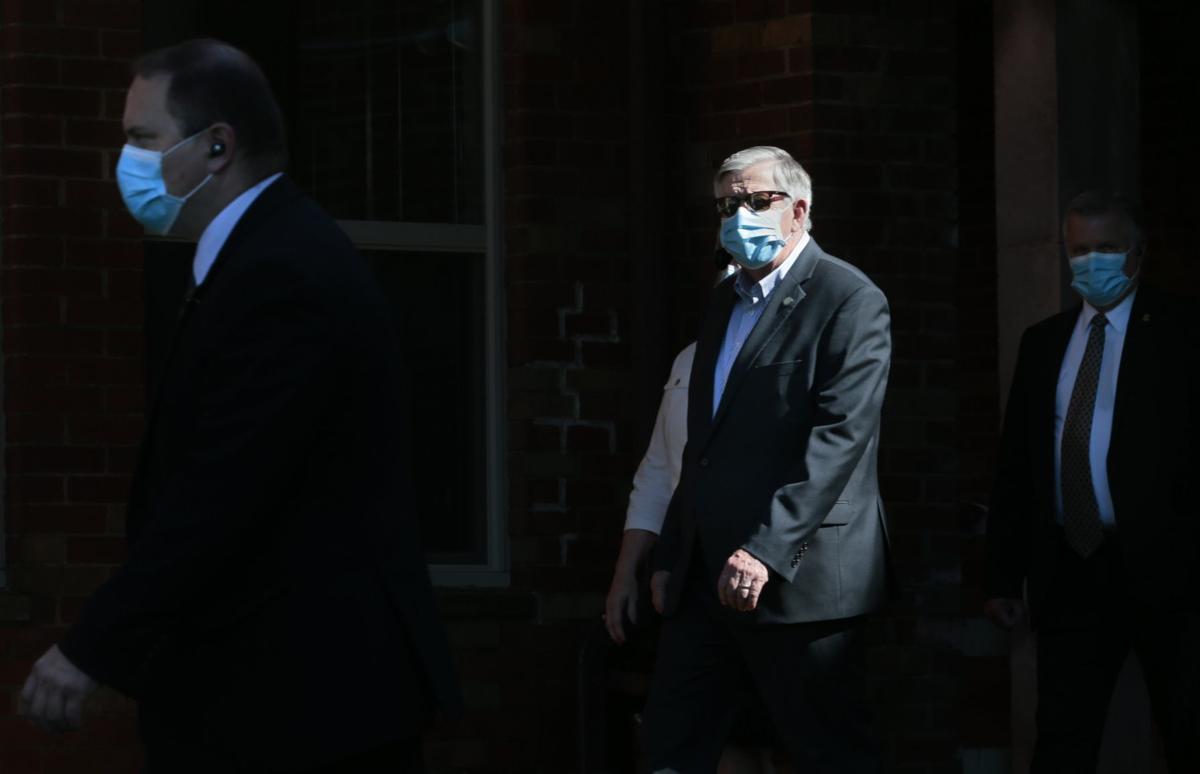 Missouri Gov. Mike Parson arrives at a mask giveaway for area churches at Mt. Beulah Missionary Baptist in Pagedale on Friday, May 29, 2020. The masks, donated by state, county and city leaders, were distributed by members of the St. Louis Metropolitan Clergy Coalition and the 24:1 Clergy Coalition. Photo by Robert Cohen, rcohen@post-dispatch.com 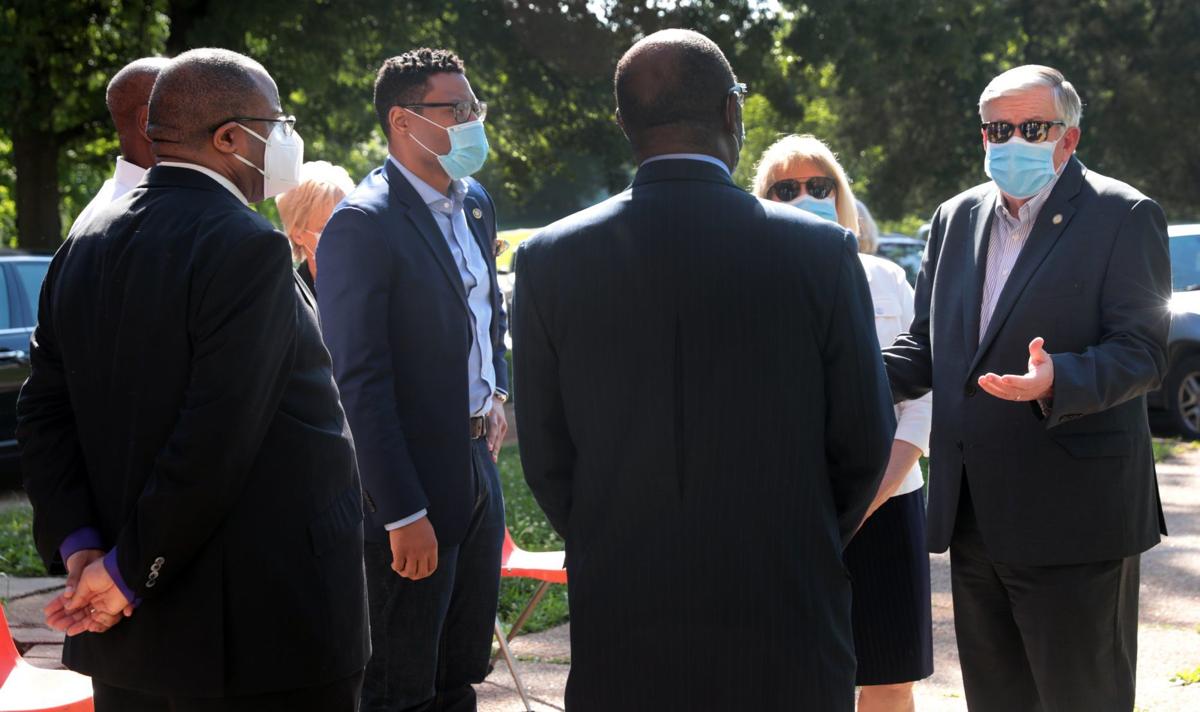 Missouri Gov. Mike Parson, right, speaks with members of the St. Louis Metropolitan Clergy Coalition and the 24:1 Clergy Coalition as he attends a mask giveaway for area churches at Mt. Beulah Missionary Baptist in Pagedale on Friday, May 29, 2020. The masks were donated by state, county and city leaders. Photo by Robert Cohen, rcohen@post-dispatch.com

Well, it wasn’t to me, personally, but the media, in general.

It came Tuesday during one of his daily coronavirus pandemic updates. Parson, a Republican, was asked by a television reporter whether he felt “any personal responsibility for the people who have been infected and don’t recover after you chose to reopen the state?”

It was a good question, the same sort of question that’s been asked to governors, and mayors and county executives and, most famously, President Donald Trump, as deaths from COVID-19 in the U.S. have passed 120,000 — far more than any country in the world.

Here was Trump’s answer when he was asked a version of that question in March about the country’s failure to ramp up early testing:

“I don’t take any responsibility at all.”

When reporters asked follow-up questions, he blamed one of them, Yamiche Alcindor from PBS, for asking a “nasty question.”

Parson, apparently, got the Trumpian memo. Here was his answer the other day:

“I don’t even know where you come up with that question of personal responsibility as governor of the state of Missouri when you’re talking about a virus. That’s no different than the flu virus or do I feel guilty because we have car accidents and people die every day. No, I don’t feel guilty about that,” Parson said. “I don’t know that any one person’s responsible for that no more than anyone else standing out here in this hallway. I can say the same thing for the media. Maybe you don’t do a good enough job really telling people the facts. Do you feel responsible for that?”

The answer is yes.

I can’t speak for other members of the media, only myself, but, yes, every single day, I feel responsible as a human and as a journalist for the deaths that surround us.

Since March, I’ve written more than a dozen coronavirus columns, and every time I write a new one during this unprecedented time, I ask myself: Did I do enough?

Apparently not. My first coronavirus column was about the ridiculousness and danger of comparing COVID-19 to the flu, something Parson is still doing.

One of the columns I wrote was about balancing the hope and fear between taking first steps to reopen the economy after months of isolation, to slowly return to whatever the new normal is. This weekend, my son’s baseball team is playing tournaments in Jefferson and Franklin counties, and every time I step around somebody to try to get to my socially distanced chair, I will ask myself: Am I doing the right thing? For my son? For my family? For the elderly couple on the other side of the ballfield rooting for their grandson?

I don’t know the answer. But I know that we in the media take our personal responsibility seriously. Sometimes, we make mistakes. Last month, in fact, I made three mistakes in one column, each one corrected in the newspaper as the details became clear. Those of us in the press, the folks Trump refers to as the “enemy of the people” and as “fake news” cringe every time we make a mistake. But we make them, and we correct them, because personal responsibility demands it.

I suspect most Americans feel similarly about their personal and professional responsibilities.

The day Parson was asked that question, the Joplin area, not far from where Parson grew up (Wheatland) and where he now lives and farms (Bolivar), was statistically the nation’s No. 1 hotspot for growth of coronavirus cases. There are bigger hot spots by population in Florida, Texas, Arizona and California. The country bent the curve, but not enough, and now cases are rising again, even before an expected second wave come fall.

The kind of life Parson has lived, as a farmer and sheriff, as a veteran and family man, suggests he has the sort of empathy and sense of personal responsibility that would prepare him to hit the answer to that softball of a question out of the park.

Instead he chose to channel his inner Trump and blame the media.

Fine, governor. I’ll take your challenge. As Missouri approaches 1,000 deaths, I go to work each day praying that I find the words to save just one life. To persuade one neighbor to wear a mask. To persuade one skeptic to take the spread of COVID-19 seriously. To persuade one governor to let one dying 78-year-old innocent man out of prison. And if I don’t?

Messenger: Let's not turn schools into the latest partisan wedge in the Age of COVID-19

Everybody wants schools to open in the fall, but there are serious questions as to whether it can be done safely.

Messenger: From D.C. to St. Louis, going after Fauci or Garza does nothing to flatten the curve

For some, COVID-19 is just another excuse to play partisan politics.

Messenger: Death of Missouri 13-year-old is tragic reminder that ‘COVID-19 is real’

Messenger: COVID-19 brings a death sentence to Missouri prisons, and Parson looks the other way

Missouri is one of the few states in the nation that has not attempted to reduce its prison population to slow the spread of COVID-19.

Department of Corrections employee said she was disciplined for quarantining during coronavirus pandemic.

Messenger: Another innocent man in Missouri nears freedom, if COVID-19 doesn't get in the way

Special master report says evidence is clear that Donald 'Doc' Nash should never have been convicted of murder.

Messenger: Missouri’s long Race to the Bottom is over. It’s a dubious victory.

The Show-Me State ranks first in all the worst categories.

Messenger: Lake of the Ozarks becomes a political litmus test for America

Nearly a decade ago, there was another public health scare at the Missouri tourist hotspot, and the politicians were on opposite sides.

Messenger: Like sports, post-coronavirus future balances on sharp edge between hope and fear

Conflicting stay-at-home orders are a sign of the politically divided times.

Messenger: Distance adds to sense of loss while mourning a loved one amid coronavirus pandemic

For hair stylists and other self-employed workers, getting unemployment proves a challenge in Missouri.

Messenger: Landmark health study taught us that ZIP code is destiny in St. Louis. It's never been more true.

Coronavirus pandemic highlights disparities between black and white and the result is too many avoidable deaths.

Missouri Gov. Mike Parson arrives at a mask giveaway for area churches at Mt. Beulah Missionary Baptist in Pagedale on Friday, May 29, 2020. The masks, donated by state, county and city leaders, were distributed by members of the St. Louis Metropolitan Clergy Coalition and the 24:1 Clergy Coalition. Photo by Robert Cohen, rcohen@post-dispatch.com

Missouri Gov. Mike Parson, right, speaks with members of the St. Louis Metropolitan Clergy Coalition and the 24:1 Clergy Coalition as he attends a mask giveaway for area churches at Mt. Beulah Missionary Baptist in Pagedale on Friday, May 29, 2020. The masks were donated by state, county and city leaders. Photo by Robert Cohen, rcohen@post-dispatch.com