It was the summer of 2015, and Fred Wellman was lost, politically speaking.

A lifelong Republican, West Point graduate and 22-year veteran of the Army, Wellman was distraught over the rise of Donald Trump, and he cut ties with the GOP after Trump famously trashed the reputation of former U.S. Sen. John McCain, who had been a prisoner of war in the Vietnam War.

“It wasn’t so much his saying that but the way it was accepted so easily by his supporters and my fellow veterans,” Wellman says. “That should, and would have been, the end of any political campaign in U.S. history, and instead it was just brushed off and even supported. I knew I had no place in that party anymore.”

A public relations professional, Wellman ended up being the executive director of The Lincoln Project for a time, the political organization started by former Republican operatives who sought to defeat Trump at the polls in 2020. Last year, Wellman moved back to his native St. Louis — he graduated from Kirkwood High School in 1983 — seeking purpose as he transitioned to a new stage in his life.

Jan. 6, 2021, provided the fuel for a new project. The insurrection, an attempted coup by Trump and his supporters, seeking to overturn the election he lost to President Joe Biden, marked the sort of scary turn to authoritarianism that so many people like Wellman feared during Trump’s first run for office.

Now a year later, Wellman and co-founder Cyrus Shick introduced the world last week to The Beer Hall Project, a new super PAC with a goal of battling those in the Trump orbit who are trying to erase the devastation of what Jan. 6 really was: an attack on American democracy.

“The erasure and rewriting of what happened that day is painfully obvious to most Americans, but for so many it is being framed as simply a ‘mass trespassing’ or demonstration that got out of hand. Even as evidence mounts it was planned well ahead of time and coordinated to disrupt the Electoral College certification,” Wellman says. “We want to truly dive into how to break through these bubbles. We don’t pretend we will find those answers ourselves and want to work with anyone who is asking those questions, highlight their work with our platforms, and spread the information to those that can use it. We have to figure this out before we lose our republic.”

The Beer Project’s first video, narrated by actor Ed Norton, whom Wellman met on the social platform Twitter, compares the Jan. 6 insurrection with another time in history: Adolf Hitler’s “Beer Hall Putsch” in 1923, a failed coup by Hitler and his fellow Nazis that, because of Germany’s weak response to it — Hitler served just nine months in prison — became fuel for the eventual takeover of the country.

“There is a familiar rhythm to what happened there, and then,” Norton says on the video, titled “Parallels,” “and what is happening here and now. First, they try brute force ... then they co-opt the process. ... Right now, the Republican Party is restricting voting rights across the country and installing followers in all levels of the election process so they can do in 2024 what they failed to do in 2020 — steal the election.”

Wellman and Shick, a former campaign staffer for ex-U.S. Sen. Claire McCaskill and former Colorado Gov. John Hickenlooper, both Democrats, plan for The Beer Hall Project to elevate truthful discussion about what happened Jan. 6. They have chosen as a key target for their organization U.S. Sen. Josh Hawley, the Missouri Republican whose objection to the election results helped fuel the insurrection. A silhouette of the infamous photo of Hawley raising his fist to cheer on the insurrectionists is the organization’s logo.

“We have a lot of problems that we’re facing in this country, and my patriotism teaches me that we can solve them all. But what’s standing in our way is the cancer of nihilism, cynicism, and disinformation,” Shick says.

It’s an ambitious goal — battling the disinformation put out by copious Trumpian propagandists — but one that is necessary if American democracy is to be saved, Wellman says: “If you can’t see the incredibly critical moment we face, its only because you aren’t paying attention. Cyrus and I aren’t famous or important, but we wanted to do something more than complaining to our friends. We all have to do our part. Democracy can die here. It’s happened before, elsewhere.”

For the record, I’m one of those friends Wellman complains to. We met when he moved back to St. Louis. One of his biggest concerns is the effect of the insurrection on people in the military and veterans like him, who have a long and distinguished history in America of serving the country’s commander in chief with distinction, regardless of political party.

Trump changed that, not just when he trashed a veteran like McCain but when he went after the career of soldiers like Lt. Col. Alexander Vindman, whose wife, Rachel, is a supporter of The Beer Hall Project.

“So many Americans are carrying on thinking its politics as normal and completely unaware of the far right’s efforts to attack our democracy,” Vindman says. “The historic example is right there to see. They just need to see it.”

Congress’ failure to pass voting protections could have lasting damage.

One year later, in many ways, the situation that led to the Jan. 6 attempts to invalidate the election have become worse.

Messenger: To rebuild trust in America, remember the Golden Rule

As police testify about the horrific events of Jan. 6, Republicans look away. 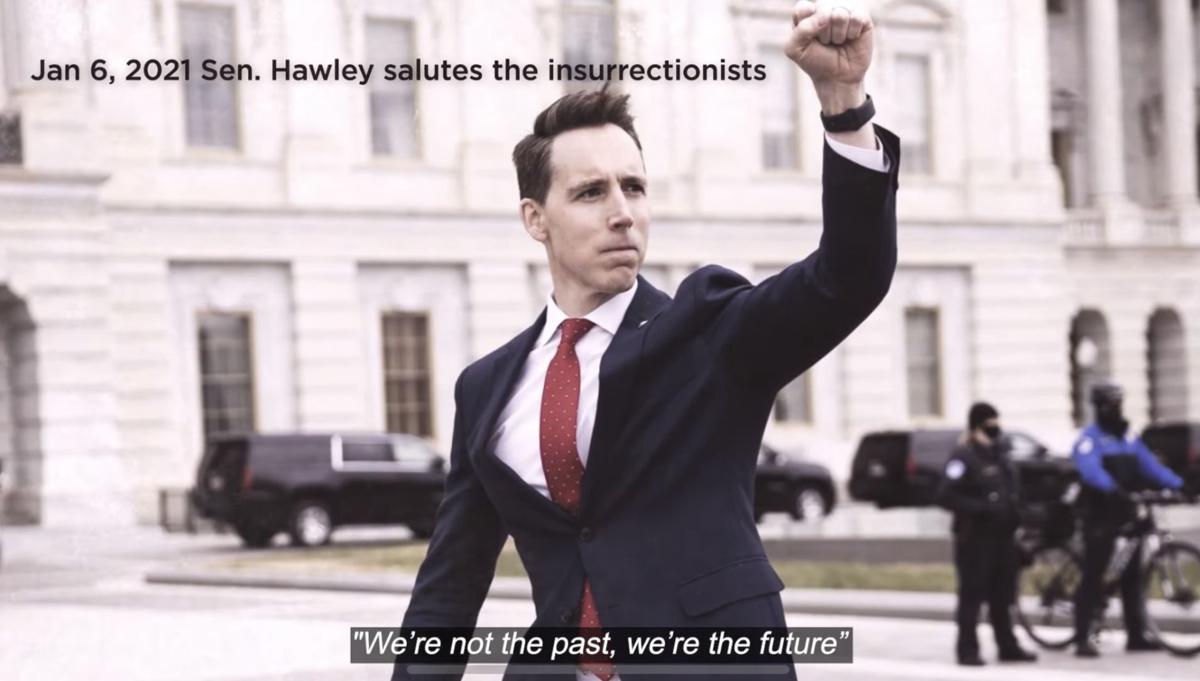 A screen shot from The Beer Hall Project video "Parallels" shows U.S. Sen. Josh Hawley with his fist raised toward insurrectionists on Jan. 6. The video is narrated by actor Ed Norton. 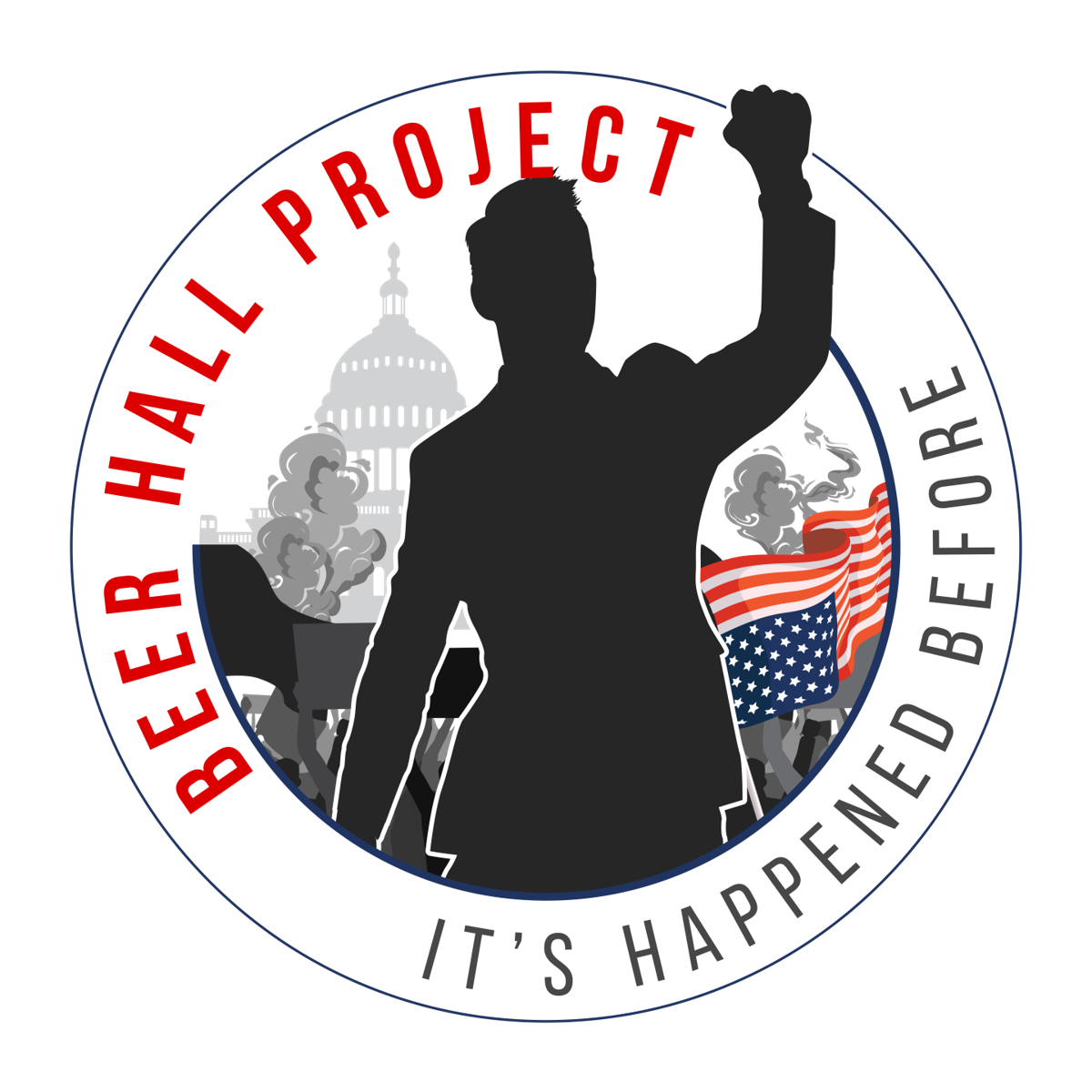