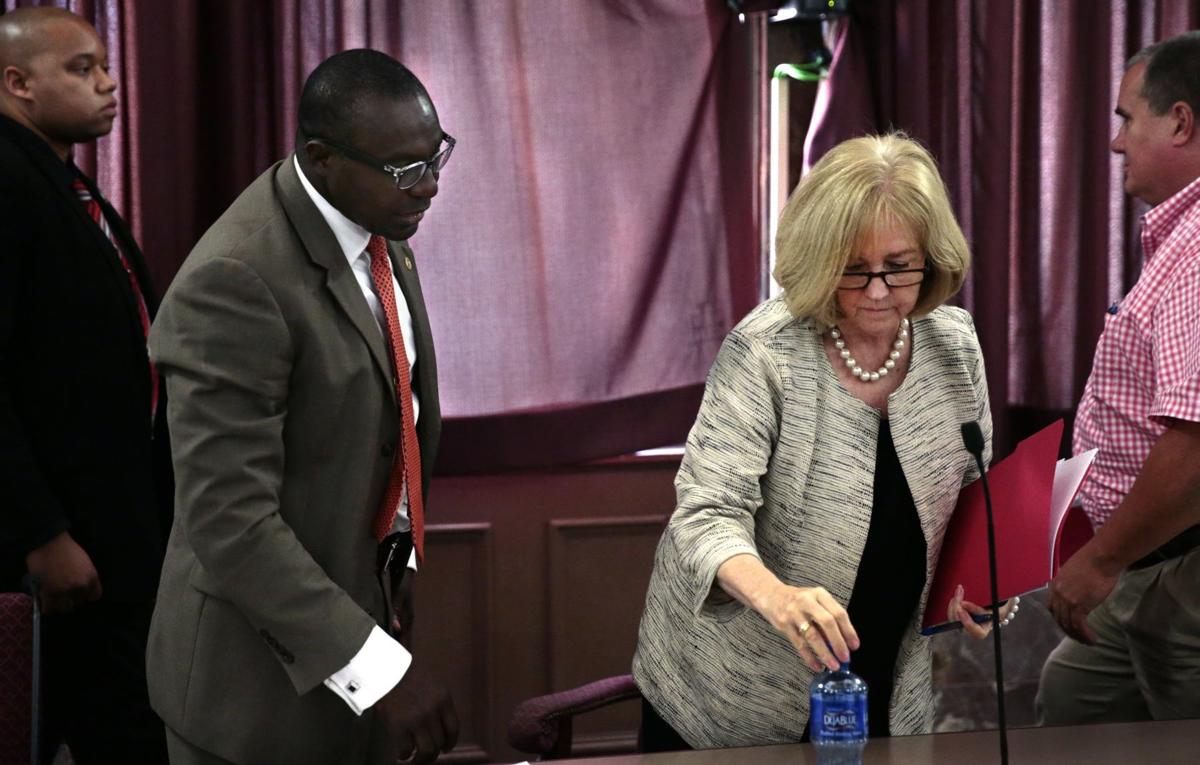 St. Louis Mayor Lyda Krewson declines to visit with Board of Aldermen President Lewis Reed after the board approved a one-year trial for police body cameras on Wednesday, Sept. 20, 2017. The board will also solicit bids for a long-term contract for the cameras. Photo by Robert Cohen, rcohen@post-dispatch.com 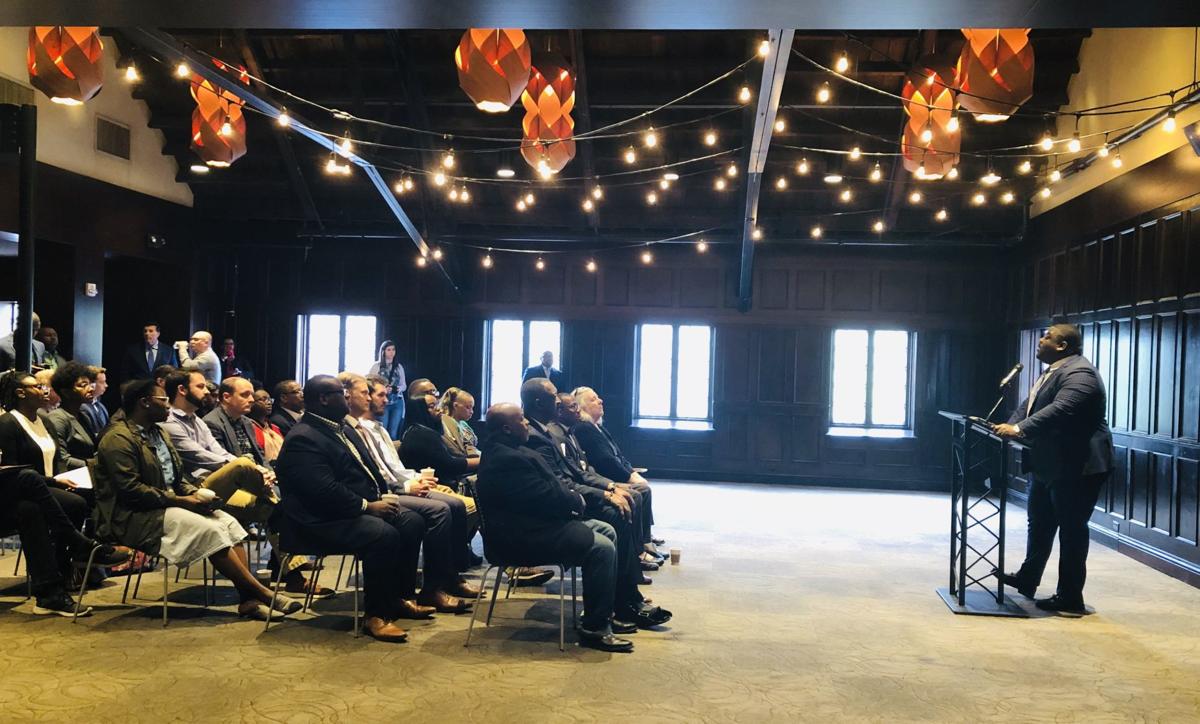 John Gaskin III, president of the St. Louis County NAACP, endorses Better Together in a speech April 18, 2019, at the Cheshire Inn. Gaskin did not disclose before the speech that he is working for Unite STL, the campaign seeking to win statewide approval for the Better Together merger plan. Photo by Jeremy Kohler, jkohler@post-dispatch.com

Meetings of the Board of Estimate and Apportionment in St. Louis are normally staid affairs.

In the antiquated government structure that often leaves St. Louis bogged down in political drama, this is the board where the rubber hits the road.

Agenda Item No. 6 was a typical proposal. With interest rates low, the comptroller’s office sought to refinance about $240 million in debt. The proposal would save taxpayers about $35 million.

Reed made the motion to approve the refinancing. It passed unanimously.

Such refinancings have helped increase the credit ratings of St. Louis Lambert International Airport to its highest levels in years, all at “A-” or better.

Two years later, Reed is no longer in the mood to help the taxpayers of St. Louis save money.

Last week, Green sought approval for the latest debt refinancing at the airport. This one would save taxpayers about $21 million. Reed and Krewson stood in the way, delaying the refinancing until at least April 29, with Reed offering this fascinating justification:

“It would be insulting to our citizens to force an unnecessary vote on a 100-plus page board bill without proper review,” Reed said.

For her part, Krewson demurred: “I personally am not trying to stop this,” she said, even though that’s precisely what she did, for now.

So what happened in the past two years?

By January 2018, Krewson had sold the city’s soul to Sinquefield, the retired billionaire investor and political meddler who is single-handedly financing the effort to try to privatize the city’s airport operations. For the airport profiteers to get their way, it helps their narrative to be able to tell tales of woe about the conditions of Lambert. Never mind the consistently increasing passenger traffic, decreasing costs, debt reduction and credit rating hikes.

For Sinquefield’s Grow Missouri, the nonprofit running the privatization scheme, this is old hat.

In 2014 the organization actually tried to hire local reporters to secretly write articles “on the side” for the operation.

The reporters didn’t bite. But the politicians are feeding at the trough.

“They are attempting to make the operations of the airport look less than professional, less than capable, so a privatization in their eyes would make more sense,” Green told the Post-Dispatch’s Mark Schlinkmann after the E&A meeting. “It is unconscionable.”

Reed, of course, says that’s “insulting.” He just wants to study the issue.

Perhaps he forgot he’s already on the airport commission.

That body received a detailed report on the proposed refinancing in October. Reed missed the meeting.

Maybe he was busy counting the more than $35,000 in dark money spent on his behalf that came from a new nonprofit called the Joseph Wingate Folk Society. The money flowed from that nonprofit to a political action committee run by Kathryn Jane Drennan called VOTE-STL. Once Reed won re-election, VOTE-STL folded up shop. Now Drennan is running a new committee, called Lyda PAC, dedicated to helping Krewson.

And so it is with politics in St. Louis these days.

Just don’t accuse them of being bought off.

That’s “insulting,” says Nancy Rice. The former campaign manager for Krewson is also the executive director of the Sinquefield-funded Better Together nonprofit that is pushing a city-county merger at the same time many of the same players are seeking airport privatization.

On Thursday, St. Louis County NAACP president John Gaskin endorsed the Better Together merger proposal. But that was before he admitted to reporters that he had just taken a consulting job for the organization, or its political campaign arm. Or, well, maybe it was the Joseph Wingate Folk Society or some other dark-money arm of the effort. Rice said it would be a mistake to connect the two dots.

Leave it to the inimitable Gentry Trotter to best describe what this transaction resembles. After the Gaskin story broke, the media maven took to Twitter and called the county branch of the NAACP a “political prostitution ring.”

As an “historian” @tonymess the County can’t split into 2 NAACP units. The current branch has a charter for the entire StL County. I’m sure mom’s ashes are smoldering. She was the Region IV Director. After she retired the County branch become a “political” prostitution ring.

The tweet recalls the old joke often attributed to George Bernard Shaw: “We’ve established what you are. Now we’re just haggling over price.”

Gaskin says he doesn’t know what his new salary is.

Aim high, I say. There seems to be plenty of money to go around.

Messenger: Stephen Moore thinks the Midwest is an armpit. Do his Better Together pals agree?

It’s hard to not see Moore's influence in Better Together and airport privatization plans pushed by his friends Rex Sinquefield and Travis Brown.

Messenger: An obituary for Better Together, smothered by the shadow of Steve Stenger

Messenger: Funder of airport privatization effort is making money on both sides of the deal

Messenger: Top adviser on airport privatization faces questions for his work with the NRA

Andrew J. McKenna is a dark-money fundraiser for anti-labor and pro-gun groups. So what is he doing advising Mayor Lyda Krewson?

Travis Brown faces scrutiny in lawsuit filed by business partner that accuses him of "looting" their jointly owned company.

Messenger: The case of the mysterious radio caller adds intrigue to airport privatization in St. Louis

Consultant accused of calling into local radio show and using a different name.

Messenger: As St. Louis heads down runway of airport privatization, a consultant upgrades to first class

Attorney for one consultant joins team with separate consultant in line for a big windfall.

Messenger: Dark money enters Board of Aldermen president's race, and it bets big-time on Lewis Reed

Messenger: Lewis Reed's struggles with the truth bigger than his tax bill

In race for the president of the Board of Aldermen, truth matters.

In lawsuit, partner of Travis Brown accuses him of using company assets as his "personal toys."

Road toward airport privatization is bumpy. Will the mayor turn around?

St. Louis Mayor Lyda Krewson declines to visit with Board of Aldermen President Lewis Reed after the board approved a one-year trial for police body cameras on Wednesday, Sept. 20, 2017. The board will also solicit bids for a long-term contract for the cameras. Photo by Robert Cohen, rcohen@post-dispatch.com

John Gaskin III, president of the St. Louis County NAACP, endorses Better Together in a speech April 18, 2019, at the Cheshire Inn. Gaskin did not disclose before the speech that he is working for Unite STL, the campaign seeking to win statewide approval for the Better Together merger plan. Photo by Jeremy Kohler, jkohler@post-dispatch.com