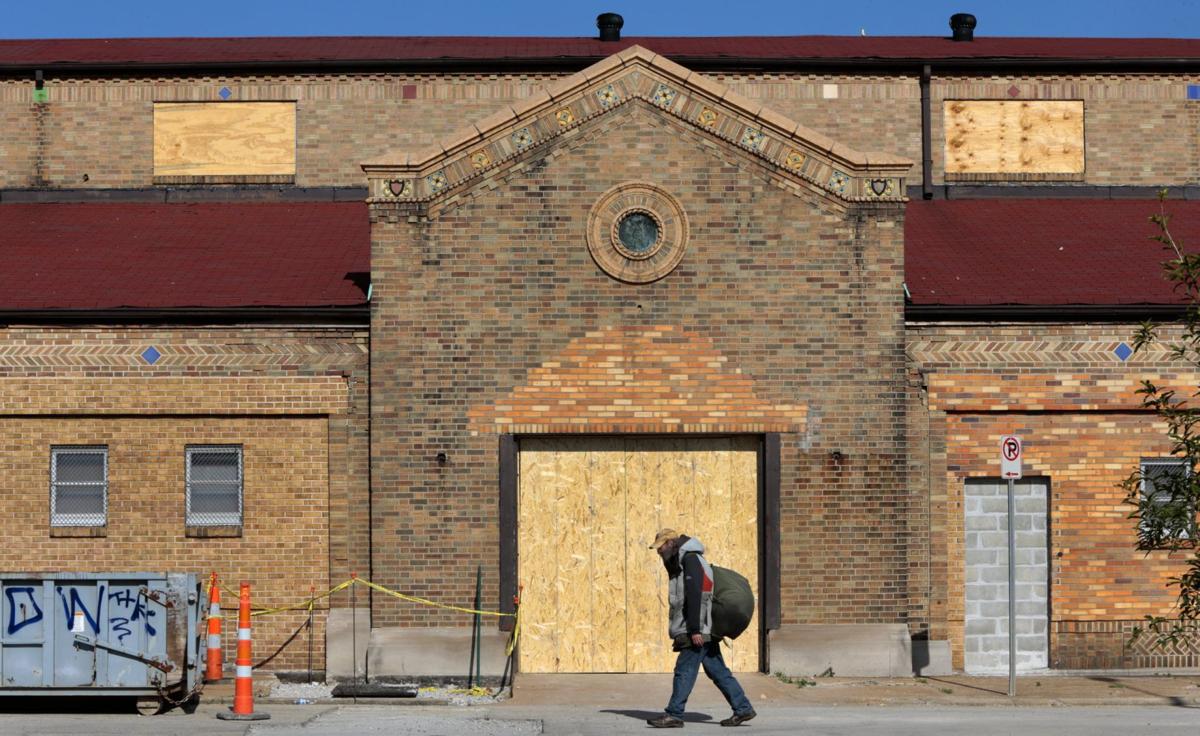 A steady stream of men make their way up North 13th Street past the Biddle House, an old market building being converted to a homeless shelter at North Tucker Boulevard and Biddle Street on Wednesday, June 15, 2016. Photo by Robert Cohen, rcohen@post-dispatch.com 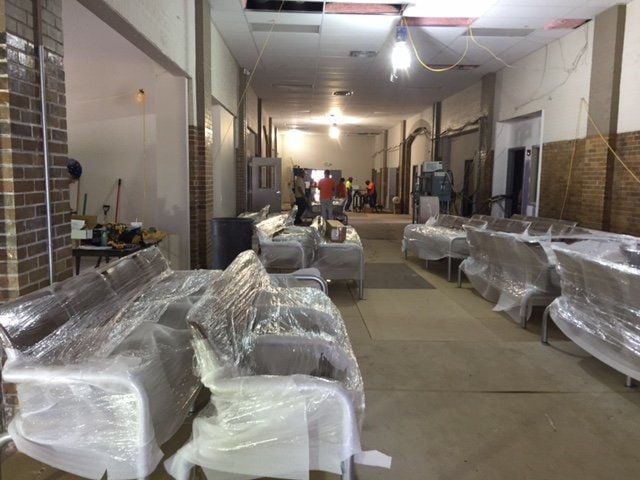 The central corridor of Biddle House will look much like a bus station, with rows of chairs in the main space, surrounded by offices, meeting rooms, dormitories and a lunch room. Photo by Tony Messenger. 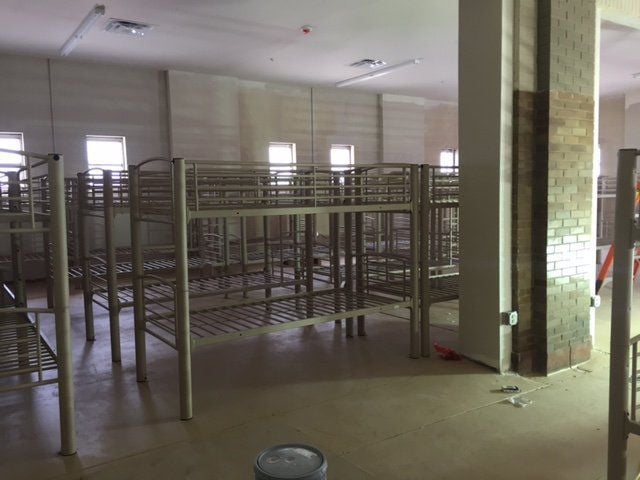 Ask Eddie Roth how the city of St. Louis is going to succeed in taking over from controversial televangelist Larry Rice in providing overnight shelter to the homeless in downtown St. Louis, and Roth offers a pithy bit of circular logic.

Roth’s point is that if the city’s new Biddle House fulfills its promise as a one-stop shelter that quickly connects the homeless to services and housing, then the longstanding loitering and crime problems connected to Rice’s shelter downtown near Washington Avenue will simply go away.

It’s a hopeful thought from my former editorial page colleague, who as a writer and a person leans toward optimism every chance he gets.

Unfortunately, a series of summer stumbles has the city’s dream of being better than Larry Rice seem at times out of reach.

There was Police Chief Sam Dotson’s announced crackdown on panhandlers after a series of high-profile crimes, most of which had nothing to do with the homeless. Dotson brought a PR nightmare upon himself when he tweeted about the city’s new crime app’s leading to a panhandling arrest. Turns out it was a trespassing case, but the damage was done.

Then Alderman Jack Coatar filed a poorly worded bill that, if passed, would criminalize the very act of feeding the homeless, or in certain circumstances, even handing them a bottle of water on a public sidewalk. Rice, as he is wont to do, held a news conference denouncing the proposal. The bill awaits debate.

The city’s changing plans and pressure from downtown neighbors led to the early closure of The Bridge, the nonprofit that had been providing downtown meals and daytime shelter to the homeless. It closed a month before Biddle House was scheduled to open to replace it.

After months of rushing to get the city’s new full-time day and overnight shelter opened on North Tucker Boulevard, Lewis Reed, the president of the Board of Aldermen, decided at the 11th hour to stand in the way.

At the meeting of the three-member Board of Estimate and Apportionment, Reed suddenly voiced his opposition to awarding the final contracts to two area nonprofits to run the Biddle House, scheduled to open Aug. 1. Reed had already supported the Biddle House project in at least three different votes going back to January.

But that was before Mayor Francis Slay announced he wouldn’t seek a fifth term and Reed made it clear he wanted the job. It was before Reed received $5,000 in campaign donations in June from the Stone, Leyton & Gershman law firm. That’s the firm where attorney Daryl Piggee works. Piggee is representing the Carr Square Tenants Association, which represents a neighborhood of mostly African-Americans just west of Biddle House, some of whom are opposed to the homeless shelter locating there.

So when the final vote to approve the Biddle House shelter came to pass, Reed gave a speech about how he’d be a better mayor than Slay, and then he voted no.

Slay got in a verbal tit-for-tat with Reed, and blamed the delay on everybody’s favorite punching bag these days, NorthSide Regeneration developer Paul McKee.

This is no way to do “better than Larry Rice.”

The entire episode reminded me of the title of a ’70s comedy album by Steve Martin: “Let’s Get Small.”

In a city that has big dreams, its elected leaders are often small. It is an internecine problem prevalent in St. Louis politics and it gets in the way of progress over and over again.

Reed said he was just speaking up for constituents who convinced him their voices hadn’t been heard. He said that he regretted his previous votes in favor of Biddle House and that the campaign donation had nothing to do with his decision-making.

“Why the hell would a $5,000 donation from Steve Stone make a difference to me?” Reed told me.

Whatever Reed’s motivations, on Friday, cooler heads prevailed — or at least one of them did — and the E&A board approved the Biddle House contracts, lest it find itself in default of the loans from the Missouri Housing Development Commission it had already voted to accept. Green voted with Slay; Reed was the lone no vote.

On Monday, I toured the Biddle House, which a week from now is supposed to have its 96 beds for men open, and a full lunch room and other services ready to get the homeless connected to housing quickly.

The beds and chairs have been delivered. The outdoor fencing to provide privacy (to the homeless, or neighbors, or both) is up. The facility is taking shape. It looks at first glance like it will be the clean, modern facility Roth is promising.

Providing services to the homeless is a difficult task in the best of circumstances. On Aug. 2, Biddle House will (probably) open a new chapter in how St. Louis treats its homeless population, with the city more invested than it’s ever been.

The program is simple: From May to August every Tuesday morning, a group of volunteers play softball for a couple of hours with homeless men and women.

President of Board of Aldermen says his votes weren't affected by more than $160,000 in campaign donations connected to the St. Louis Blues ownership.

Messenger: The Workhouse, Carr School, and three decades of neglect in St. Louis

Messenger: Lewis Reed's struggles with the truth bigger than his tax bill

In race for the president of the Board of Aldermen, truth matters.

A steady stream of men make their way up North 13th Street past the Biddle House, an old market building being converted to a homeless shelter at North Tucker Boulevard and Biddle Street on Wednesday, June 15, 2016. Photo by Robert Cohen, rcohen@post-dispatch.com

The central corridor of Biddle House will look much like a bus station, with rows of chairs in the main space, surrounded by offices, meeting rooms, dormitories and a lunch room. Photo by Tony Messenger.