Elbert Walton Jr. was driving along Forsyth Boulevard near the Washington University campus.

He wanted to make a U-turn, but gave it a second thought when he saw a campus security vehicle ahead. So he went straight instead.

Walton, then a graduate student at the prestigious university and an officer in the Association of Black Collegians, would be stopped by the security guard, arrested, and, he says, kicked by one officer, despite having not violated any traffic laws. His detention spurred two days of protest at the campus. 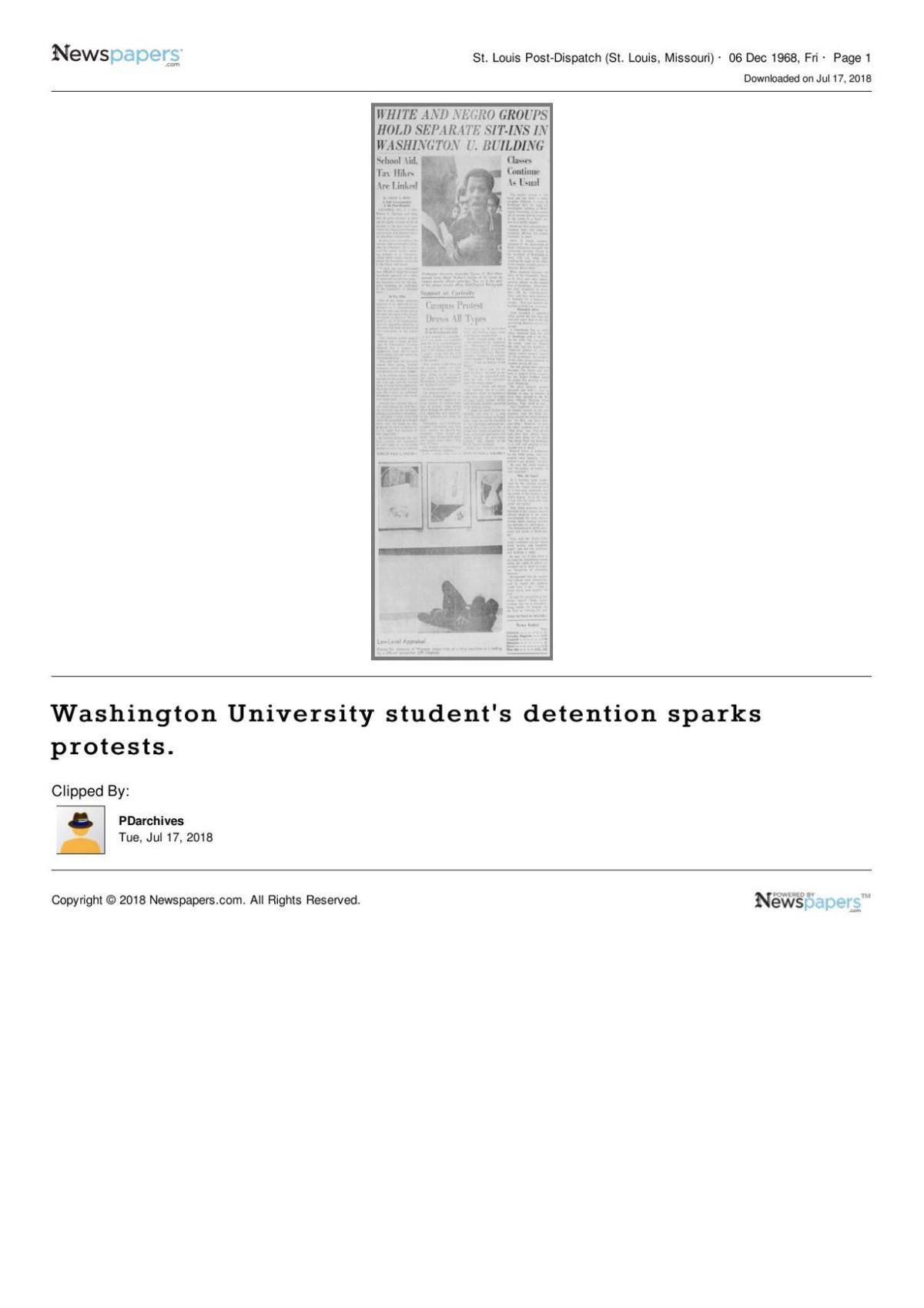 Fifty years later, St. Louis is reliving its past. Again.

On July 7, 10 black Washington University students were stopped by Clayton police while walking to the MetroLink after a late-night meal at IHOP near St. Louis Galleria. There had been a dine-and-dash at the restaurant and the manager had called police. Four black men in their late teens or early 20s had run up a bill of $61 and left without paying. A Richmond Heights police officer heard the call and saw the Washington University students walking to the transit station.

Clayton police arrived. Some of the students had receipts. But never mind that. Police escorted the students three blocks back to the IHOP, where the manager said they were not the scofflaws.

The students were incoming freshmen at a university that has a history of not being the most welcoming place to people from economically disadvantaged backgrounds, situated in a metropolitan area that just four years ago was in the national spotlight as blacks took to the streets to protest police brutality and institutional racism built into the fiber of St. Louis. The students were specifically recruited to Washington University by administrators trying to reverse those trends that started long before 1968 and continue today.

One of those administrators, Provost Holden Thorp, took to Twitter to express his disgust.

“I’m embarrassed to be a resident of Clayton,” Thorp wrote. “Thanks to all our folks who are providing support to these great students, many of whom I’ve thankfully already had the pleasure to teach.”

I’m embarrassed to be a resident of Clayton. Thanks to all our folks who are providing support to these great students, many of whom I’ve thankfully already had the pleasure to teach. https://t.co/M7sxo0rKNp

For the past couple of years, Thorp has been trying to reverse a trend at Washington U. that in 2013 had it ranked No. 1 in the nation in a dubious statistic: the highest income disparity among its students, with only 6 percent of its student body coming from the bottom 60 percent of the nation’s income class. Thorp knew then that the university could, and had to, reverse that trend.

That’s what happened to Jason Wilson just four months ago when he was trying to become the first African-American elected to the Clayton School Board. Wilson won the race, but not before being stopped by Clayton police twice while knocking on doors to secure votes, as candidates for office do in every city in America.

“What gets me about this is the assumptions,” Wilson told me at the time. “You assume I don’t belong here.”

It’s a problem in Clayton, and any number of the 88 municipalities in St. Louis County, that has been around since, well, before 1968.

“As a resident of Clayton for many years, I know the challenges we have to make our community much more racially welcoming,” Uchitelle wrote me in an email after I wrote about Wilson’s experience. “We have come a good ways but still have a long way to go.”

He is disputing the timeline described by the Washington University students and the administrators who are backing their story. He has yet to apologize to the students or their parents for a heavy-handed show of force that never would have happened to 10 white students in a similar circumstance.

Perhaps some advice from former Washington University professor Barry Commoner — who died in 2012 — would help. The first rule of ecology espoused by the world-renowned environmentalist is that everything is related to everything else. In March, Wilson was stopped for Canvassing While Black. Two months later, three black teens had the police called on them by Nordstrom Rack in Brentwood for Shopping While Black. In July, a few days after an all-white ribbon cutting unveiled the new Gateway Arch to the world, 10 black students were detained for IHOPing While Black.

Messenger: What should Clayton police have done after IHOP 'dine and dash?' Remember the Fourth Amendment.

Messenger: A unifying message for St. Louis: Change that is worth it sometimes hurts

When will St. Louis, just St. Louis, be the answer to the question everybody asks?