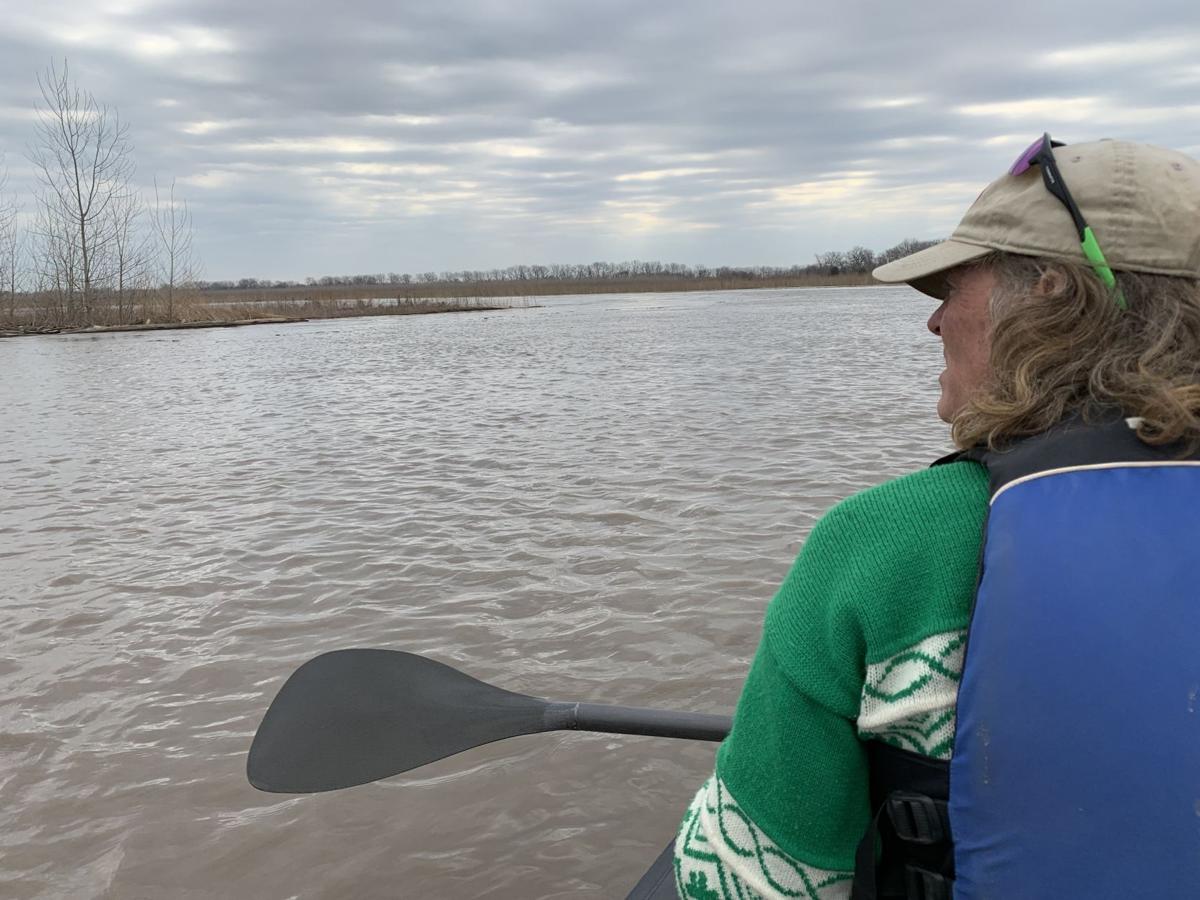 Mike Clark paddles a canoe through the Big Muddy Refuge around Cora Island during high water in March 2019. Post-Dispatch photo by Tony Messenger. 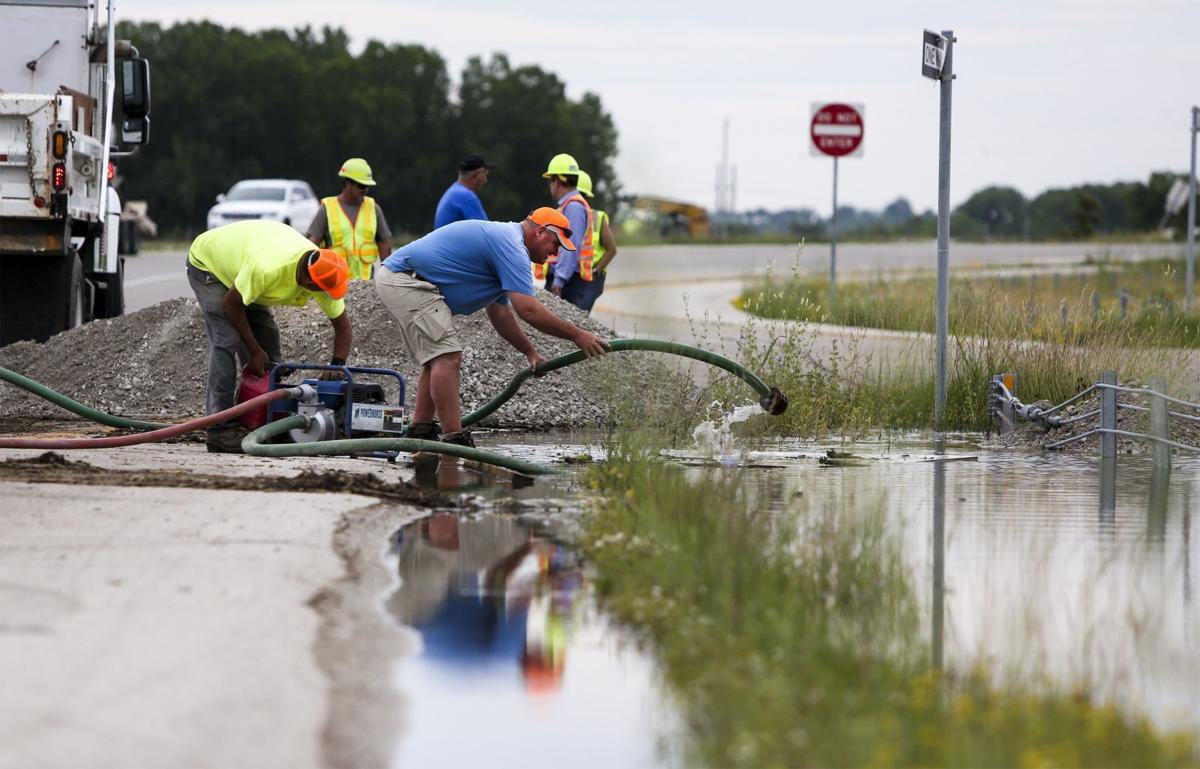 Workers with the city of Maryland Heights and the Levee District lay lines to pump water out of the median on Wednesday, June 19, 2019 on Missouri Highway 141. The highway is closed on both sides from Creve Coeur Airport Road to Creve Coeur Mill Road due to flooding from Creve Coeur Lake. Photo by Colter Peterson, cpeterson@post-dispatch.com

Editor’s note: This is the third of three columns about a levee setback project that could be a turning point in Missouri River policy in the face of climate change.

WEST ALTON — One of the most beautiful spots in the St. Louis area is a 1,400-acre patch of former farmland known as Cora Island. It is bordered on one side by the Missouri River and the other by a channel dug by the U.S. Army Corps of Engineers to help the river reconnect to its flood plain.

While the water on the river side rushes 3 miles to Confluence Point, where the Missouri and the Mississippi Rivers meet north of St. Louis, the water in the man-made channel is calm, slowly filling wetlands and surrounding copses of willow and cottonwood trees that take deep root.

This spot in St. Charles County is part of the statewide Big Muddy Fish and Wildlife Refuge, a flood control and environmental protection project managed by the U.S. Fish and Wildlife Service at 17 points along the Missouri River.

That there aren’t more areas like this along the river is why for the second year in a row, the Lower Missouri River, from Sioux City, Iowa, to St. Louis, has been designated by nonprofit American Rivers as the second-most endangered river in the country.

Since the 1943 flood that soaked the Midwest for months as the Big Muddy left its banks and deposited silt and sand in its wake, the wide, meandering river in the middle of the country has been too constricted by levees and dams. Its flow was increased by dikes and channels intended to turn the river into a navigable nirvana that never produced the promised economic fruit.

And in this time of climate change, the combination of decades of bad river policy and an increase in weather extremes has led to a place where environmentalists, commercial interests, farmers and the Corps of Engineers are all singing from the same hymnal.

Mostly. In St. Louis, there is still an unholy alliance between developers and municipalities chasing sales tax dollars who believe that tax-incentives for big box retail outlets built in former flood plain make for good policy.

Despite widespread opposition, the city of Maryland Heights, for instance, continues to seek massive commercial development in its regularly flooded property behind the Howard Bend Levee. The city aims to mimic the commercial monstrosity built in the Chesterfield Valley after the 1993 flood when local leaders reacted to the inundation of Gumbo Bottoms by raising the Monarch Levee.

“What urban areas do with their remaining flood plain should matter too. The loss of those flood plain acres do cumulatively raise flood levels elsewhere,” says Caroline Pufault of University City. She’s the chairperson of the Sierra Club’s Missouri River Network. “And there is or should be a principle involved that we all value connected flood plain acres.”

Much like the levee setback project in Atchison County, in northwest Missouri, there is some recent progress on this front. A bipartisan group of state lawmakers in Jefferson City has been pushing legislation over the past few years to make it harder for municipalities to offer tax incentives in flood plains. One of the fruits of that legislation was giving county tax increment finance commissions more power. The one in St. Louis County blocked incentives to the Maryland Heights development last year.

Adam McLane, the Missouri state director for The Nature Conservancy, likes to use a phrase he first heard from Bass Pro Shops owner Johnny Morris: “We all live downstream from somewhere.” It’s a version of former Washington University biologist Barry Commoner’s first law of ecology, that everything is connected to everything else.

That’s one reason why the annual American Rivers list of endangered rivers is so important, and why the Missouri River’s continued presence on it is so distressing. Last year, while the Lower Missouri held its spot in second place, the Upper Mississippi occupied top billing on that list. America’s two great rivers meet at St. Louis, and they suffer from the same issues of constriction and lack of access to flood plain.

The problems aren’t just in flood-prone areas, but also where all that water ends up, in a Dead Zone in the Gulf of Mexico. Upstream runoff of fertilizer creates a hypoxic mix that kills fish and other organisms and threatens serious damage to the food chain. Improving the ability of the Missouri and Mississippi Rivers to connect to their flood plains, where wetlands can help filter the water and make the rivers healthier, is key to a future where America’s great waterways are healthy and effective economic engines.

As Congress embarks on yet another debate over infrastructure, Richard Oswald, an Atchison County, Missouri, farmer, hopes the rivers aren’t ignored. He wants to see fewer dams and levees and more investment in the sort of flood plain projects like the one in his county that protects the economic interests of farmers, and the ecological health of the river at the same time.

He compares the potential for rethinking how the country manages its rivers — and the flood plain surrounding them — to the house he built after the 2019 flood destroyed his family home of generations.

Better, in northwest Missouri farm country and in urban and suburban St. Louis, means more flood plain. Give the river room to roam. That’s the lasting lesson in the rebuilding of Atchison County Levee L-536.

Messenger: 'Leave it as it is,' conservation groups plead to save Missouri park

Former Gov. Jay Nixon weighs in on behalf of conservation groups to save a Missouri park.

Messenger: Protector of the Missouri River wins one more battle before canoeing downstream

Founder of Greenway Network dies after battle with cancer.

Messenger: From Atchison County to Maryland Heights, to ease flooding, give rivers room to roam

Mike Clark paddles a canoe through the Big Muddy Refuge around Cora Island during high water in March 2019. Post-Dispatch photo by Tony Messenger.

Workers with the city of Maryland Heights and the Levee District lay lines to pump water out of the median on Wednesday, June 19, 2019 on Missouri Highway 141. The highway is closed on both sides from Creve Coeur Airport Road to Creve Coeur Mill Road due to flooding from Creve Coeur Lake. Photo by Colter Peterson, cpeterson@post-dispatch.com