Dave Davis was The Last Caretaker.

From 1991 to 1999 he lived in the house that Dr. H. Phillip Venable built; the house Venable and his family never got to live in; the house stolen from the prominent black doctor by the city of Creve Coeur in 1956.

The park where that house used to sit still bears the name of the mayor — John T. Beirne — who perpetrated the racist act.

Last week, Davis joined the movement to change the name of the park at the end of Country View Drive to honor the doctor who was driven out of town because of the color of his skin.

“A flood of emotions came back,” he told me, when he read my column about The Venable Park Coalition that seeks to change the Beirne Park name and educate the St. Louis community on this shameful part of our history.

In fact, during the time he lived in Venable’s house, which served as a clubhouse for the park built on land taken by eminent domain from the Venables, he researched the park’s history and, for a brief time, tried to build support to change its name.

Now 54 and living in Festus, Davis was a Ritenour High School grad living in St. Ann and working as a landscape superintendent at a local hospital. He was going to school at St. Louis Community College at Meramec. He and his then-wife and two kids were doing their best to make ends meet when they heard about the caretaker’s job. They could live in the house virtually rent- and utility-free, and pick up trash and keep the restrooms clean at the park. They jumped at the opportunity.

“It was the answer to all our prayers,” Davis says.

While taking a class on folklore, he decided to write a research paper on the history of the park.

That’s when he found out he was living in a stolen house.

So Davis set out to do something about it. He started telling everybody he knew about the park’s history. Some knew vaguely of it, almost four decades after the dispute had played out on the front pages of the Post-Dispatch. Others were surprised, but none too interested in helping him dredge up the past.

“There was no appetite for it,” Davis remembers. “They didn’t want to open it back up again.”

“I was like a little kid,” he says. “I wanted to tell everybody.”

The same voice every time, suggesting that, “If you know what’s best for you and your family, you need to stop talking about the park.”

So he dropped it. He dropped his project. He dropped out of his folklore class. He just went back to being the caretaker of the home until he left in 1999. He was the last person to serve in that job. The city of Creve Coeur later razed the home.

Twenty years later, Davis still gets emotional talking about it.

In his research, he found that Venable was a man of infinite class and poise who deserved so much better than he received.

Marion W. Weir knew that, too.

She was the wife of Victor Weir, a prominent resident at the time, and the sister of Jimmy Wilson. Wilson was the mayor who vetoed the eminent domain of the Venables’ house, before the next mayor, Beirne, revived the effort to keep him out of the Spoede Meadows subdivision.

Weir was one of the white residents at the time who showed the Venables kindness and stood up for their right to move to Creve Coeur. Venable remembered that kindness, which showed in a letter he sent Mrs. Weir after the shocking murder of her husband in 1959.

“I shall never forget your kindness to me just three short years ago,” Venable wrote Weir. “Your personal greeting gave me courage to uphold my rights as a citizen in spite of the fact that some would have it otherwise. … May God bless you in your hour of sorrow.” 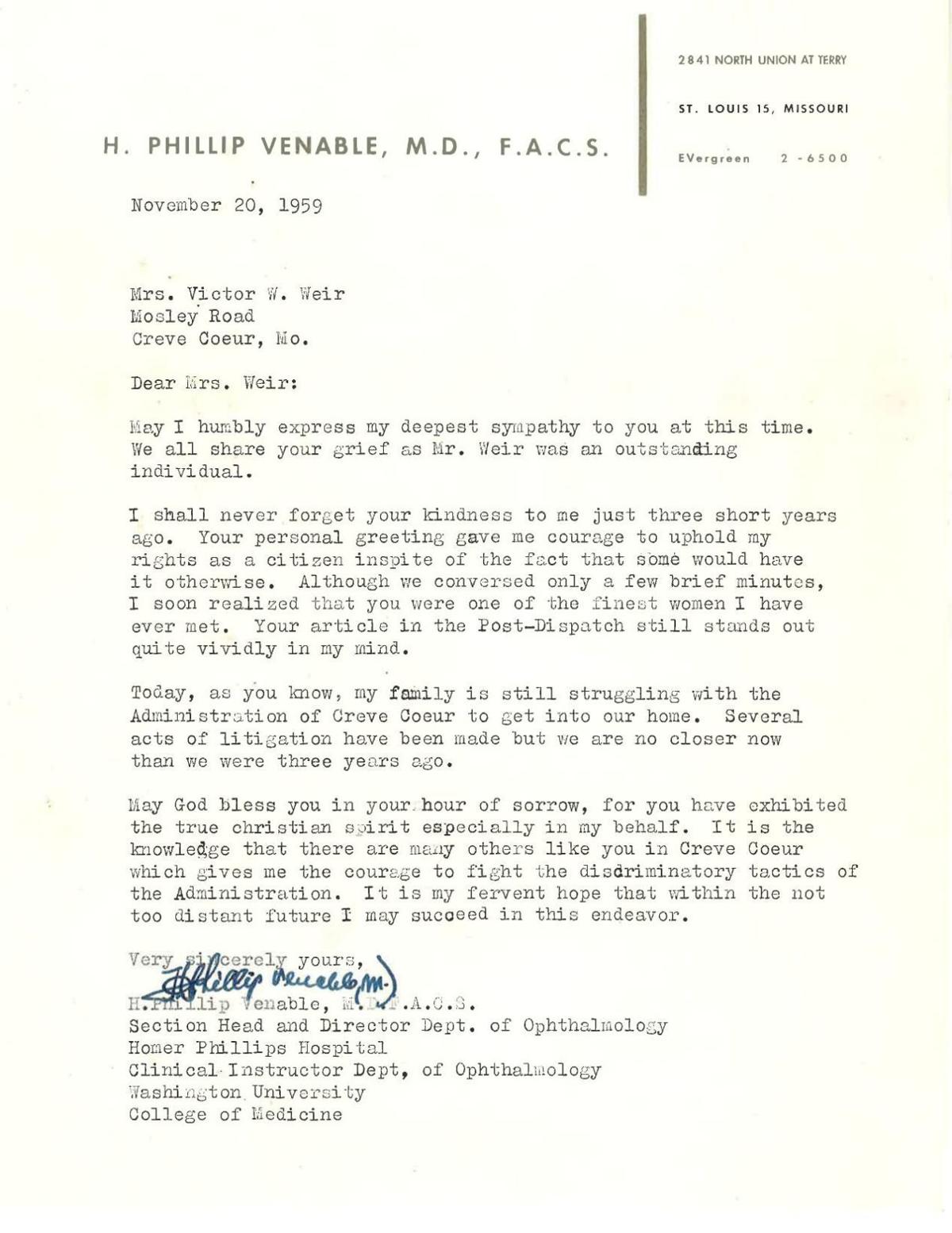 Weir’s grandson, Steve Stradal, found the letter from Venable in a collection of his grandmother’s possessions. He shared it with me this week, in the hopes that it might help shed light on the character of the doctor whose name belongs on the park built on stolen land.

“If my grandmother were still alive, she’d be front and center on this,” Stradal says.

In his touching letter to Weir, Venable remained hopeful that he would win the battle to regain his home and property. He was wrong. Just two weeks later, Missouri’s Court of Appeals ruled against him.

Davis is ready for round two of the battle to bring some level of restorative justice to this reminder of the history of segregation in St. Louis.

“I still regret I didn’t follow through before,” he says.

The Venable Park Coalition is growing, and it is righteous.

The Last Caretaker is no longer afraid.

Editor's note: This column has been corrected to include the correct year of Victor Weir's death.

Messenger: Missouri has a Medicaid crisis involving 100,000 children, and Parson ignores it

As Kansas governor touts Medicaid expansion, Missouri governor is asleep at the wheel.

Messenger: Back wall of Civil War-era home collapses in Benton Park, and the preservation standoff nears its end

Where do property rights give in to the preservation demands of a historic neighborhood? Peggy Ladd is about to find out.

Messenger: Hawley needs refresher course on what happens in a ‘normal courtroom’

His brief stint as Missouri attorney general provides a guide to his real-world experience.

Screenshot of the top of the Facebook page for The Venable Park Coalition. 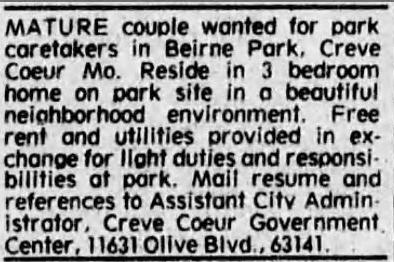 An ad for a caretaker for house in Beirne Park that had been taken by eminent domain from Dr. H. Phillip Venable appeared in the Post-Dispatch in 1981.