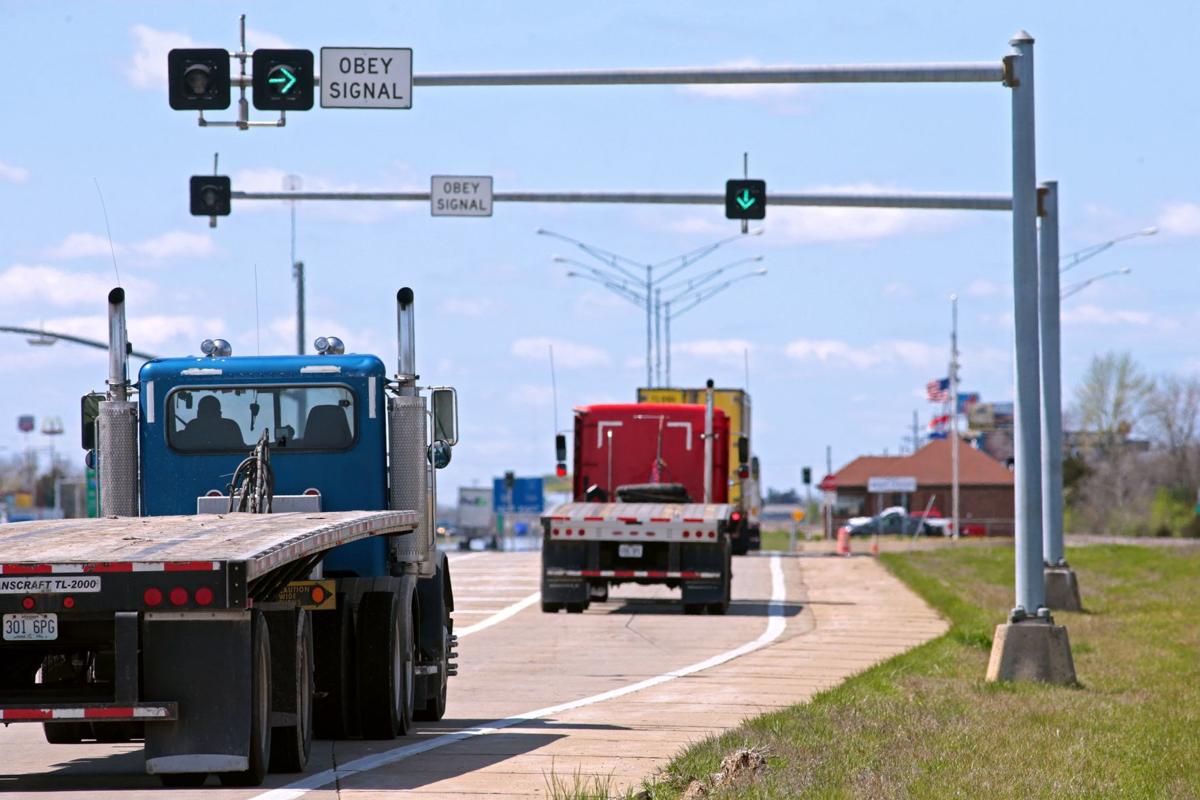 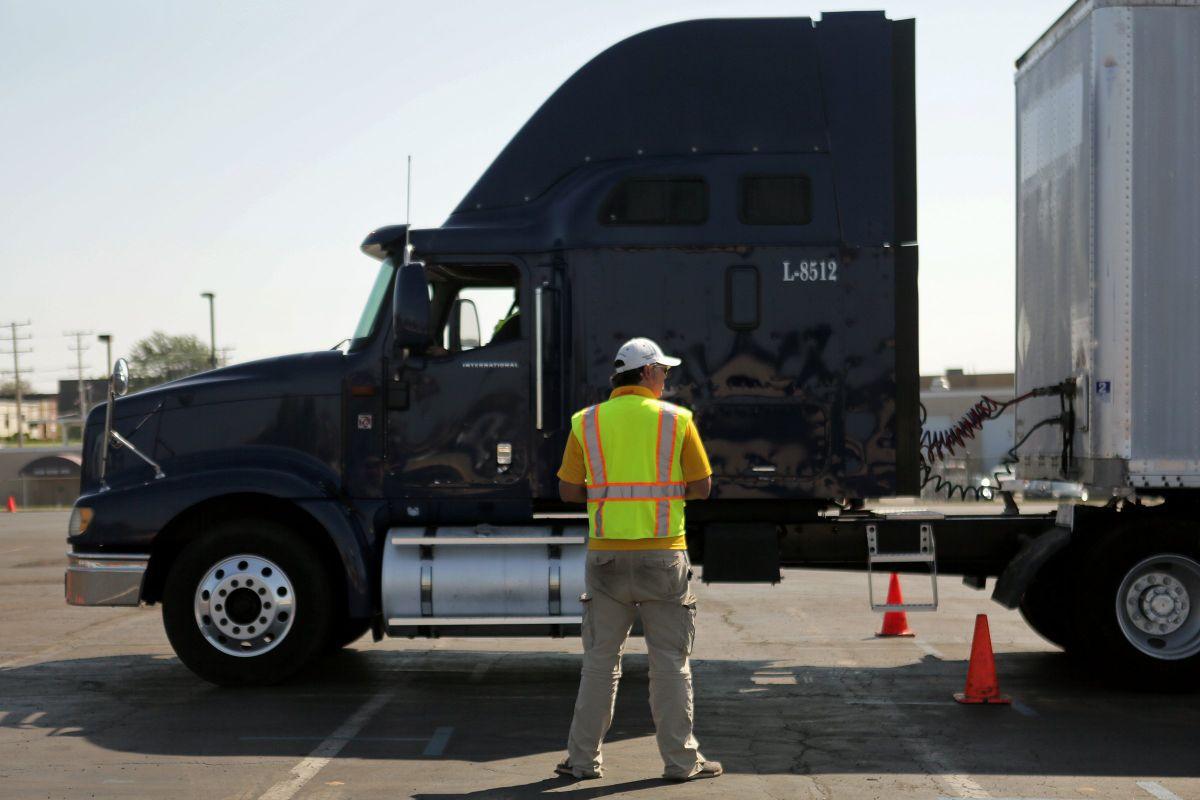 Q: There is a strange looking sensor device set up on the exit ramp between south bound I55 and south (or west?) bound US 67. I've never seen anything like it before - Do you know what that is used for?

A, from Andrew Gates with MoDOT communications: "That is a weigh-in-motion sensor to detect oversized commercial vehicles. It is the only one in the area."

(File photo is of a student learning to drive a tractor-trailer at St. Louis Community College.)

State Rep. T.J. Berry was driving home from the Capitol on a January afternoon when he received a call from a legislative aide.

“You need to get back here,” the aide said. “The FBI was in your hearing. They want to talk to you.”

Berry, a Republican from Kearney, turned his car around and went back to his Capitol office.

A bill he is sponsoring, House Bill 306, had just had a hearing in the House Special Committee on Technology and Innovation. The bill would remove alleged barriers in Missouri law to fair competition in the weigh station bypass industry for truckers. Right now, one company, a nonprofit called HELP Inc., is the only one allowed to operate in the state, using a technology called PrePass. The company has invested about $20 million installing sensors in state rights-of-way and transponder technology that allows big-rig drivers who pay for the service and meet certain criteria to avoid the extra time it takes to stop at weigh stations for full inspection.

They sit on the board of HELP Inc.

“There is no doubt in my mind that there is a conflict of interest,” Berry says.

Berry’s bill passed two committees and landed on the desk of Speaker of the House Todd Richardson, R-Poplar Bluff. But Richardson has refused since early March to put the bill on the House calendar.

On Wednesday, the speaker said he expects to put the bill on the calendar by the end of this week. He called it a “deep concern” that the FBI was asking questions about the issue.

Since at least January, the Federal Bureau of Investigation has been investigating the situation surrounding the bill, the dispute between HELP Inc. and Drivewyze, and the relationship between state employees and the company the state regulates.

Officially, the FBI “will neither confirm nor deny the existence of an ongoing investigation,” said spokeswoman Bridget Patton. But Berry, the chief executives of both companies, and a lobbyist for Drivewyze all confirmed they have either spoken to the FBI or otherwise were aware of the investigation.

At the crux of the conflict is the relationship between state employees and HELP Inc., and whether those state employees, including the former superintendent of the State Highway Patrol, used their positions to help the nonprofit they also serve.

In 2014, Drivewyze, which operates jointly with HELP Inc. in 25 states, started a pilot project in Missouri, which because of its central location is one of the most important states to the nation in terms of the trucking industry. Drivewyze uses cellphone and GPS technology, which makes it different from HELP Inc., which needs physical infrastructure on the highways to read transponders in trucks. Almost immediately when the pilot project started, the company started getting resistance from state employees, says Drivewyze CEO Brian Heath.

Two of those state employees, Col. Bret Johnson, then-superintendent of the Highway Patrol, and Scott Marion, head of the Motor Carrier Services for MoDOT, were also board members of HELP Inc. When the nonprofit was started, after defense giant Lockheed Martin used a federal grant to study the weigh station bypass technology in the 1980s, it set as a strategy developing public-private partnerships with states. Most of the states where HELP Inc. operates have state employees on the board. Many of the state agencies, including Missouri, use federal transportation dollars to pay dues to belong to HELP Inc., which has $90 million a year in revenue.

In August, Johnson sent Drivewyze a letter canceling the pilot project. He was on the HELP Inc., board at the time. The issue, Johnson says, is that Drivewyze didn’t have access to the “weigh-in-motion” data from sensors in the state highways that had been installed by HELP Inc. State law, Johnson says, requires Drivewyze to have that data to operate.

Drivewyze — and state lawmakers, including Sen. Rob Schaaf, R-St. Joseph — tried to get the data from the state, arguing it was public record. The state denied the requests.

“I just asked for the data and they said no,” Schaaf said. He is sponsoring a bill in the Senate similar to Barry’s that would allow competitors to share the data.

Johnson said he was just following the law. He sees no conflict with the dual role he and Marion had on the HELP Inc. board while also regulating the company and its potential competitors.

“The whole time I was superintendent I didn’t attend any board meetings,” Johnson said.

In February, Johnson retired from the Highway Patrol. He has since started a consulting company and has a contract as an adviser to HELP Inc. CEO Karen Rasmussen.

“They approached me to do some consulting for them,” he said. “I don’t understand what the complaint is.”

Neither does Rasmussen, she says. Johnson won’t work on Missouri projects, she said.

Rasmussen said she hasn’t spoken with the FBI but is aware of what she termed their “inquiry.”

Johnson isn’t the first Missouri employee who once regulated HELP Inc. to go to work for the company. It also employs Jan Skouby, Marion’s predecessor as head of motor carrier services, and former Highway Patrol Maj. Greg Kindle, who was directly involved with negotiations with Drivewyze over its canceled pilot project.

Schaaf compares the state’s relationship to HELP Inc., to the revolving door in the state Legislature through which elected officials often leave to become lobbyists.

“The corruption I’m seeing with state employees being on the board of the very entity they regulate is just absolutely bad,” Schaaf said. “It’s really disgusting.”

He’s not the only one to see it that way.

Richardson says he sees “no reason” why state employees should be on HELP Inc.’s board. “It certainly doesn’t seem necessary or appropriate,” he said.

In the past couple of years, both California and Florida have pulled state employees from the HELP Inc. board.

“The fact that their sensors are in our right-of-way and that they have a competitor now, we didn’t feel it was proper to serve on their board,” said Brian Blanchard, assistant secretary for engineering with the Florida transportation agency.

“I’ve never had anything like this happen to me before,” said Berry, who just wants to see his bill debated before the full House. “This thing stinks.”

Messenger: State workers failed to disclose their connection to company they regulated

Both the FBI and state Auditor Nicole Galloway are investigating the relationship between the state and HELP Inc.

Messenger: Missouri removes its conflict in trucking dispute, but the taint remains

There are now three investigations into relationship of HELP, Inc., to state of Missouri.

Audit suggests multiple violations of conflict of interest laws by state employees in Missouri Highway Patrol and Department of Transportation.

Q: There is a strange looking sensor device set up on the exit ramp between south bound I55 and south (or west?) bound US 67. I've never seen anything like it before - Do you know what that is used for?

A, from Andrew Gates with MoDOT communications: "That is a weigh-in-motion sensor to detect oversized commercial vehicles. It is the only one in the area."

(File photo is of a student learning to drive a tractor-trailer at St. Louis Community College.) 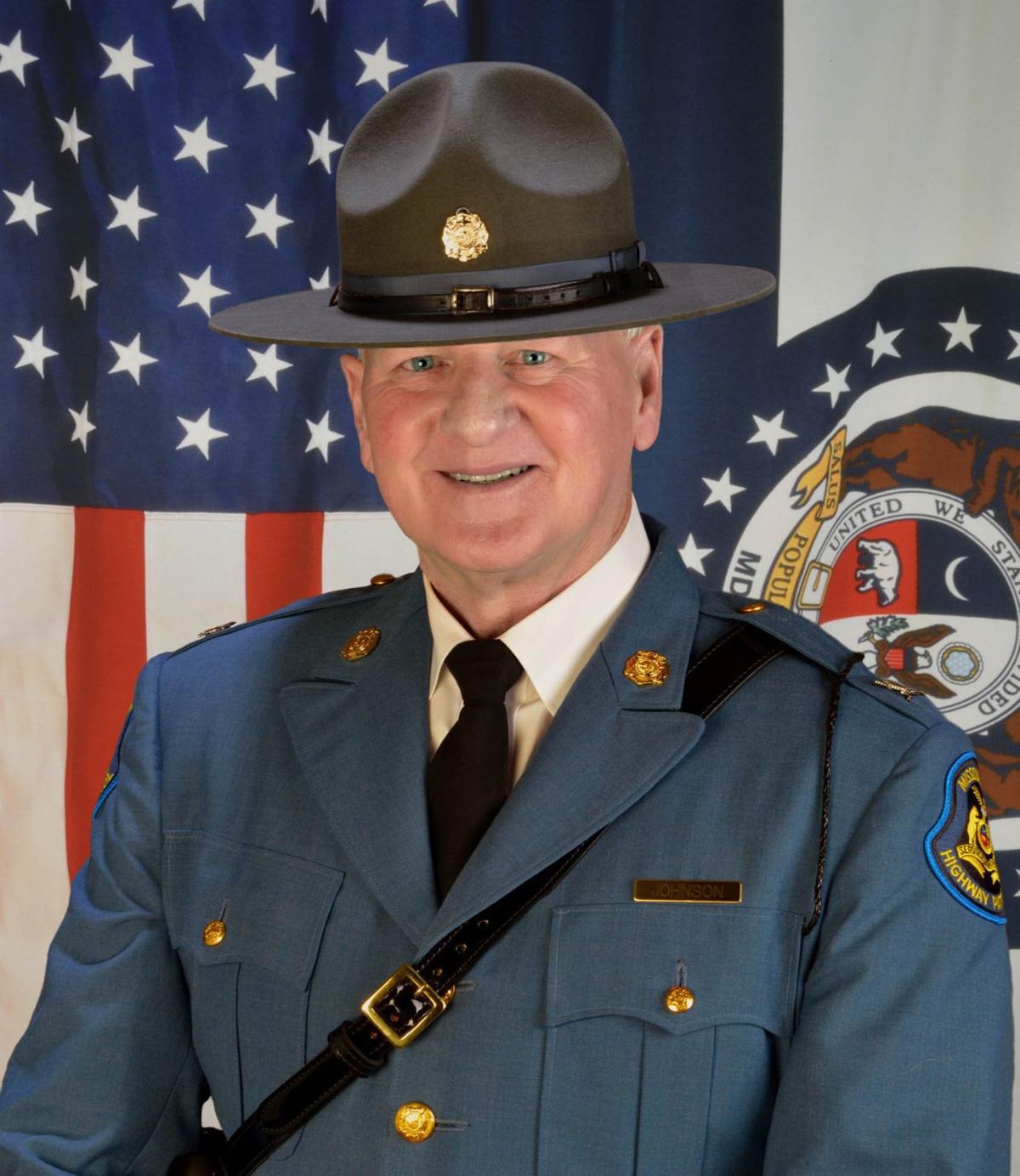