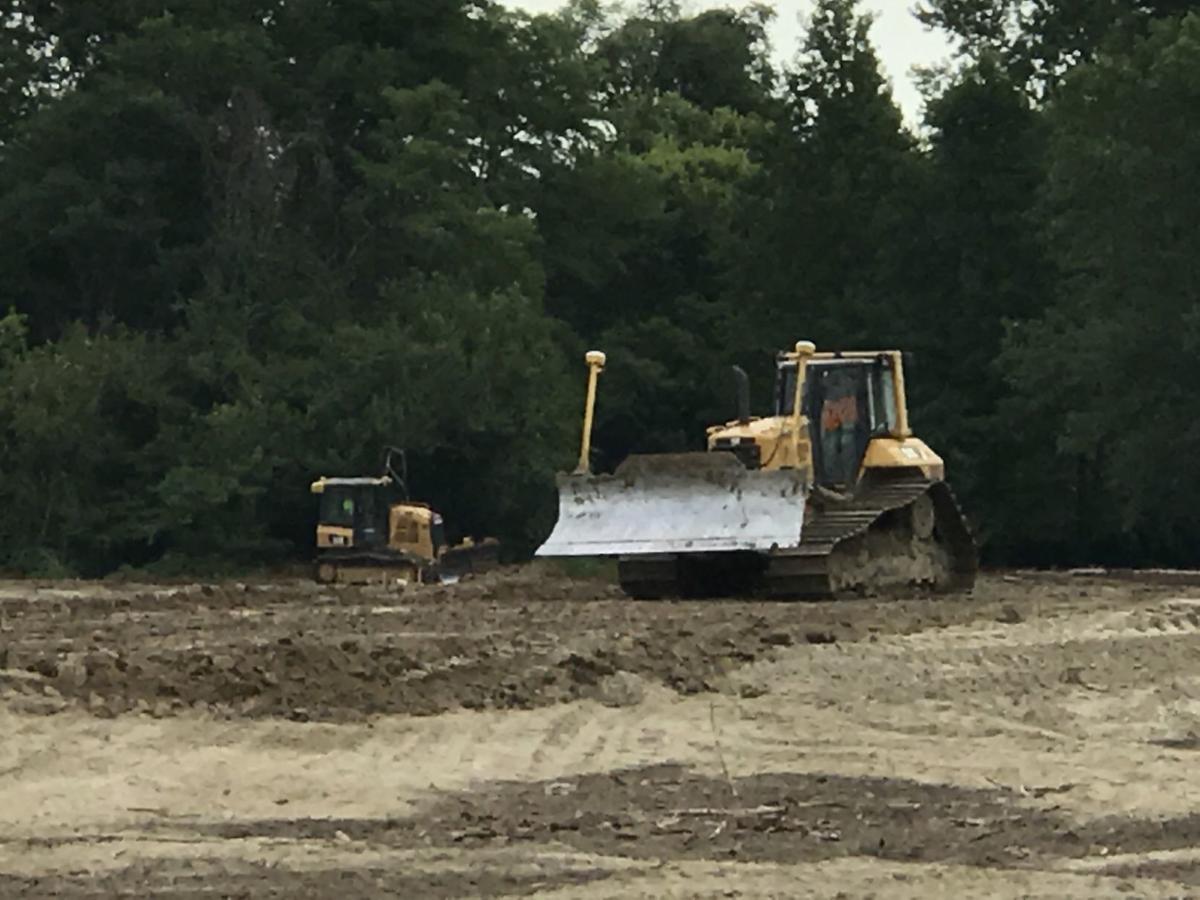 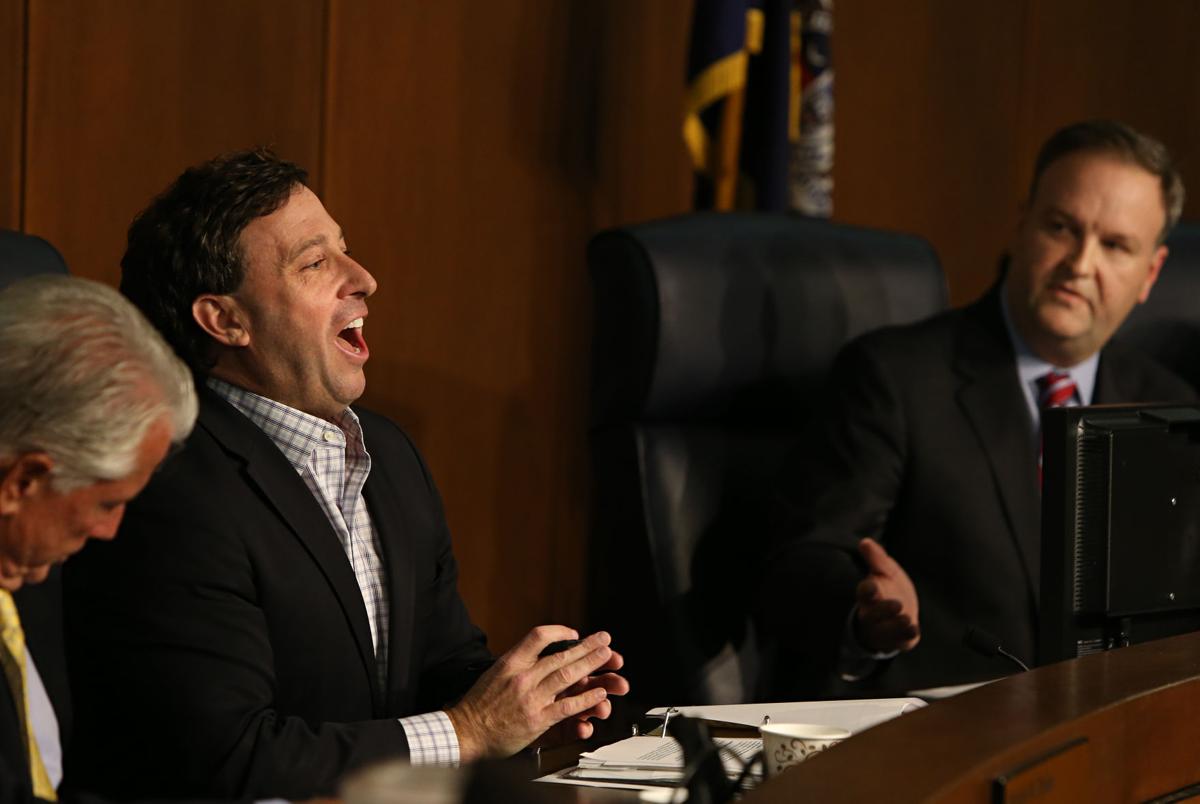 St. Louis County Executive Steve Stenger (left) mocks District 2 St. Louis County Councilman Sam Page (right) at the start of meeting about building a hockey rink in Creve Coeur Lake Park on Tuesday, Aug. 29, 2017. "I know the dog ate your homework ... I guess you were fooled again," said Stenger to Page in a terse exchange between the two men before the public comment portion of the meeting. Photo by David Carson, dcarson@post-dispatch.com

The St. Louis Ice Center will not qualify for approval as an acceptable “public facility,” the park service wrote the Missouri Department of Natural Resources. Under federal law, the 250,000-square-foot project pitched for the northwest corner of Creve Coeur Lake Memorial Park must be approved by the park service. But because the federal agency believes that construction of the project has begun without its approval, it is asking the DNR to shut it down.

“We therefore ask that you instruct the sponsor, St. Louis County, to cease work so that all legal compliance can be accomplished before construction continues,” wrote an acting director of the recreation grant program.

The letter — sent Aug. 25 — was the second such missive in the past two months. It spurred a meeting on Tuesday in Jefferson City between DNR officials and top county officials.

At that meeting — just a few hours before the County Council passed a resolution seeking to delay the project — Sheila Sweeney, CEO of the St. Louis Economic Development Partnership, and Gary Bess, the county’s parks director, verbally assured the DNR that construction work related on the proposed ice center site is for an unrelated — and not yet documented — stormwater project.

On Wednesday afternoon, Missouri Division of State Parks Director Ben Ellis warned Bess and Sweeney in a letter that any construction activities related to the ice center “are prohibited.”

The letter allowed the grading work to continue “so long as the work conforms with all applicable laws.”

The letter seeks documentation on the alleged stormwater project “as soon as possible,” and it asks the county to inform the state when the work is completed and the park land is again “open, accessible and safe for outdoor public recreation use.”

If the National Park Service doesn’t approve the project as an acceptable public facility, it would trigger a “conversion” process under the Land and Water Conservation Fund Act.

That means that the ice center, if it goes forward at all in its proposed location, will become significantly more expensive.

The conversion process requires other land at least equal in size, outdoor recreational opportunities and fair market value to be conveyed to the park as a replacement for the land that is lost.

There is no guarantee that the project will meet the park service standards for an acceptable conversion, either.

For national park officials, the questions on the ice center started as far back as March.

A group of federal employees were discussing various issues with the ice center proposal that had been brought to their attention by critics and news coverage. The project, pushed by St. Louis County Executive Steve Stenger, would build a massive new practice facility and administrative offices for the Blues on 40 acres of federally protected park land.

Under the auspices of a new nonprofit, the St. Louis Legacy Ice Foundation, the center would also be rented out to youth hockey teams.

For the ice center to be built, though, it needs federal approval, because all of the park is protected by various federal preservation laws.

At least three of the National Park Service employees who could ultimately have a say in that approval weren’t buying what Stenger and Sweeney were selling, that the massive facility and its 800-plus-car parking lot and pro shop and hockey hall of fame were primarily intended to improve “outdoor recreation.”

That’s what the federal law requires for the facility to get approved.

“I struggle to understand how this will be a net benefit to public outdoor recreation,” wrote Emily Ferguson in an April 5 email to Roger Knowlton and Carol Edmondson. The emails were obtained in an open records request to the DNR. “Overall, this facility sounds like a National Hockey League training facility with availability for college, high school, and finally, public use.”

Ferguson is in charge of the state and local assistance program for the park service. Knowlton is the acting chief of the recreation grant program. Edmondson is an outdoor recreation planner.

The park service manual that outlines the approval process specifically describes “professional sports facilities” as “examples of uses which would not ordinarily be approved.”

Between April and August, the federal concern over the project was magnified as officials discovered construction on the ice center site had apparently begun before approval was even sought.

That action is what spurred the letters to Missouri officials. The DNR acts as a go-between with the park service in getting such projects approved. It had approved grading on the property when Sweeney told officials it was for stormwater work. But there is no record of a stormwater project and the permit filed with Maryland Heights, where the work is being done, by the construction company describes its work as site preparation for the ice center construction.

The park service and DNR documents add weight to the critics of the project who say it should not be built in a flood plain, that it takes away from the park’s intended use, and that the county deceived state and public officials in gaining approval for grading of the property.

On Tuesday, the County Council voted 4-3 to pass a resolution sought by Council Chairman Sam Page that seeks to delay the project.

The resolution is nonbinding, but in light of the park service letters, that might not matter much.

According to the emails obtained by the Post-Dispatch, DNR officials told the county as far back as March that approval would not be based on public sentiment, but the law.

“The ultimate decision is predicated by whether or not the proposal supports outdoor recreation,” wrote one DNR official, “and this did not seem to be the case with the ice center.”

Many questions about ice rink proposal in park

Admittedly, I am not a fan of building ice rinks at Creve Coeur Lake Memorial Park. I run at the park three days a week after work. I am tryin…

Giving up shared lands for enrichment of a few

Regarding "Council calls for timeout on ice complex project" (Aug. 30):

Proposition 2 will require vote before park land can be developed.

St. Louis halfway house for federal prisoners turns into cash cow for family that runs it

One family controls board of a nonprofit that runs Dismas House of St. Louis. The halfway house has a colorful past, and now is helping that family make millions of dollars off a federal contract.

St. Louis County Executive Steve Stenger (left) mocks District 2 St. Louis County Councilman Sam Page (right) at the start of meeting about building a hockey rink in Creve Coeur Lake Park on Tuesday, Aug. 29, 2017. "I know the dog ate your homework ... I guess you were fooled again," said Stenger to Page in a terse exchange between the two men before the public comment portion of the meeting. Photo by David Carson, dcarson@post-dispatch.com