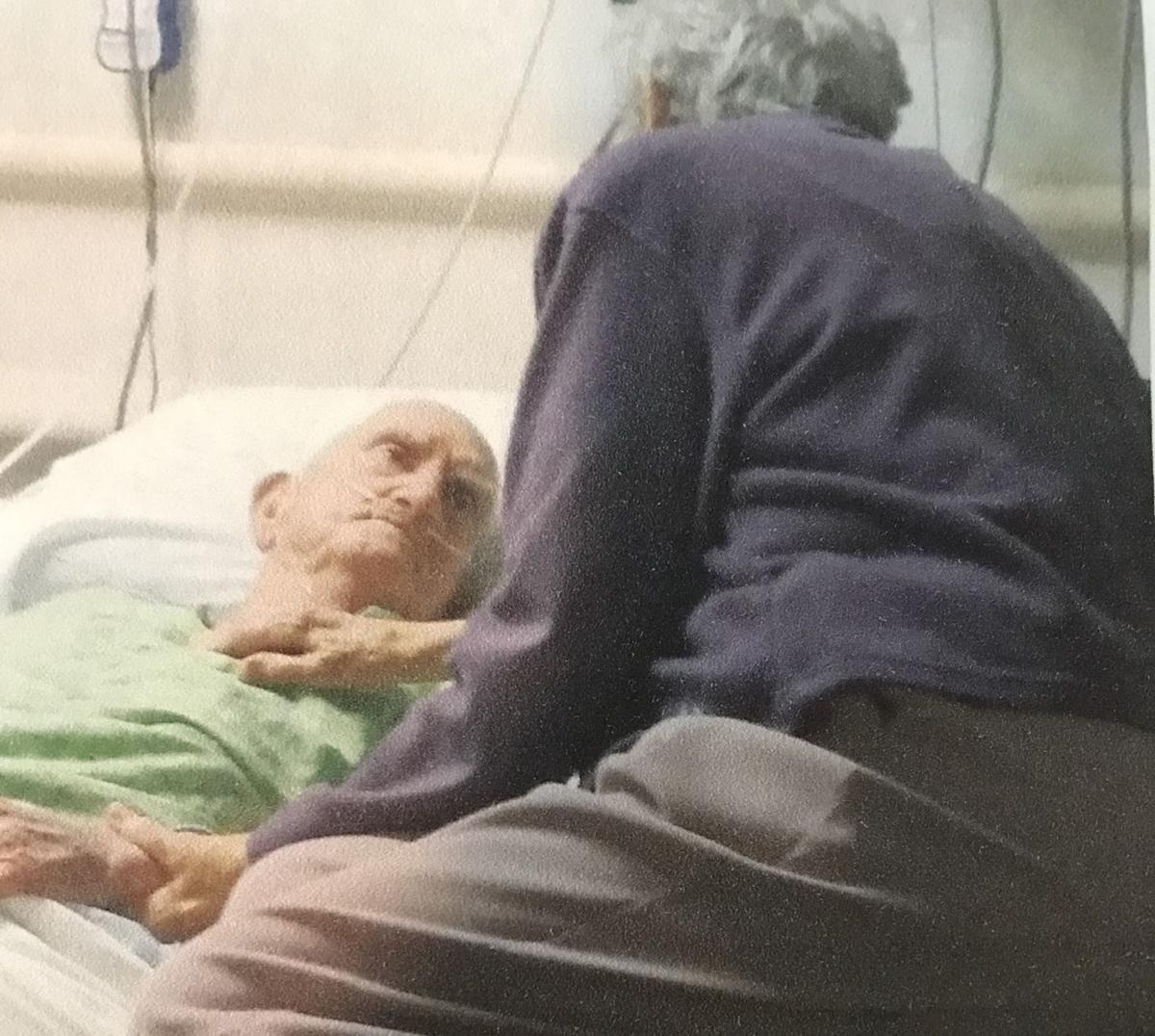 Genny Davis visits with her husband, Roy Lee Davis, in St. Anthony's hospital, last year before he died. He had been a resident of the St. Louis Veterans Home. Photo provided by Genny Davis. 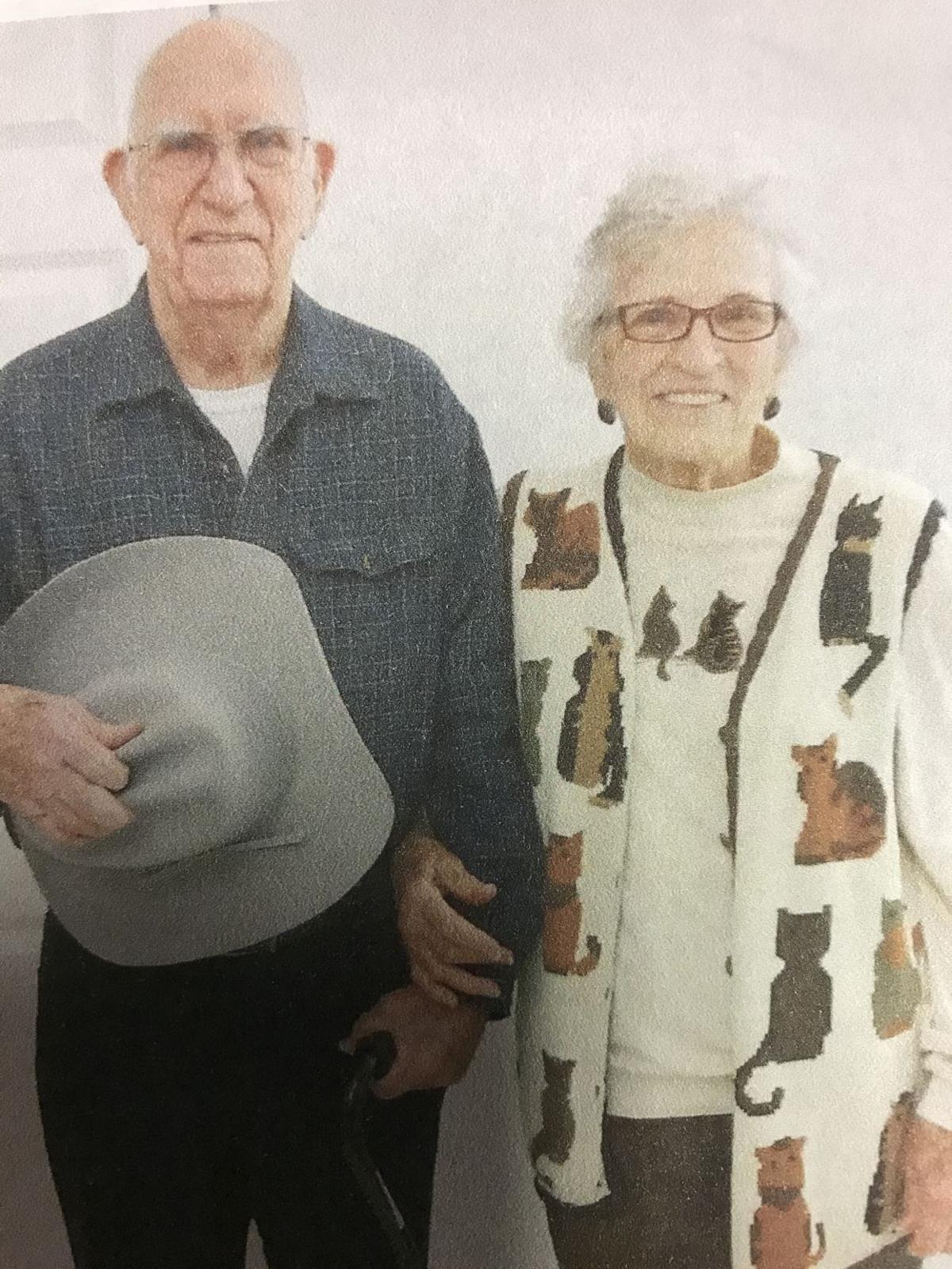 Roy Davis and his wife, Genny, pose for a photo on Feb. 3, 2016, the day Davis entered the St. Louis Veterans Home. Photo provided by Genny Davis.

Just a couple of weeks after Roy Lee Davis started living at the St. Louis Veterans Home, his family barely recognized him.

“He just did not look like himself,” says Jane Turk, his stepdaughter.

It was February 2016. Davis, a 21-year Air Force veteran who worked most of his life in finance, had dementia. Once his wife, Genny, could no longer take care of him, the family thought the state-run veterans home was the best option.

He walked in on Feb. 3, needing only the help of a cane.

He was wheeled out 19 days later on a gurney, no longer able to stand on his own. He was taken to St. Anthony’s Medical Center with internal bleeding, pneumonia, dehydration and multiple medical problems.

Davis’ story is like too many others in the St. Louis Veterans Home in the past couple of years. Families and veterans tell tales of missed medication and over-medication, of neglect, of bruised bodies, of employees who are disciplined if they advocate too loudly.

After months of complaints, those issues came to a head Monday morning when Gov. Eric Greitens made the sort of moves that might save lives. He replaced five members of the Missouri Veterans Commission, who had all been sitting on expired terms. And, following the lead of Lt. Gov. Mike Parson — who pushed for change in a news conference a week earlier — he said he believes the commissioners should fire the administrator at the veterans home, Rolando Carter, as well as the director of the commission, Gen. Larry Kay.

Monday morning, some of the family members who had been complaining about treatment at the home gathered in the cafeteria after Greitens’ announcement. There was Dory Poholsky, the 83-year-old Kirkwood volunteer who began meeting with veterans more than a year ago to record their stories. There was Glenda Adler, whose husband, Ron, lives in the home. She has documented numerous errors in medication given to the men who live in the home. There was Cheri DeJournette, whose father, Robert, once was scalded in a shower and then went weeks without one. And there was Jim Luebbert, whose father, William, died earlier this year after about a month in the home.

His son is still trying to figure out what went wrong. Just this week, the Missouri Veterans Commission denied him access to his father’s complete medical record.

On Monday, the family members and veterans’ advocates were all smiles. They know lives were probably saved by the governor’s actions.

But the road to recovery at the St. Louis Veterans Home will be a long one. It is understaffed. The employees are still underpaid. There are trust issues.

And the problems at the Missouri Veterans Commission run deeper than one or two people.

That’s what Turk remembers about the battle to seek justice for her stepfather.

When Davis died, Turk wrote everybody from Kay to Greitens; from Kim Packard, director of the homes program, to Mark Fontana, who was administrator at the home at the time. She got little help.

Genny Davis still remembers the first time she visited her husband in the St. Louis Veterans Home. He had been there just a few days, but she could tell he wasn’t eating.

“His dentures hadn’t been cleaned,” she remembers. “How could he eat?”

It starts with the little things. Luebbert’s father had a glass of water next to his chair, but he couldn’t lift it, so he became dehydrated.

Neglect leads to weight loss. Then come the falls and the bruises.

Genny remembers her husband as a “very sweet man.”

They met at Alton High School in Illinois, but they weren’t high school sweethearts until 55 years later.

It was at a high school reunion where they met again, later in life after first marriages and lives well lived.

“I didn’t want to go,” Genny remembers, “but a friend convinced me. She introduced me to Roy.”

They were married for 13 years before his quick demise after a short stay at the St. Louis Veterans home.

“He went in there in good condition,” Turk says. “A month later, he’s dead. It’s not right.”

Now, new members of the veterans commission will read the results of what appears to be the first serious investigation into what went wrong at the home. Then they’ll have some decisions to make.

Genny Davis has a suggestion for them:

“Get new people working there.”

Stan Smith steps into the top job Jan. 2. He oversaw operations of all seven Missouri Veterans Homes before leaving state employment in 2014. He has 34 years of experience in nursing home administration.

Tony Messenger has documented the complaints and stories of veterans and families alleging poor care at the North County facility.

Genny Davis visits with her husband, Roy Lee Davis, in St. Anthony's hospital, last year before he died. He had been a resident of the St. Louis Veterans Home. Photo provided by Genny Davis.

Roy Davis and his wife, Genny, pose for a photo on Feb. 3, 2016, the day Davis entered the St. Louis Veterans Home. Photo provided by Genny Davis.